Introduction: The prognostic role of SCUBE1 serum levels in PTE has best of our knowledge, not been previously investigated.

Materials and Methods: The study included 49 patients diagnosed as having acute PTE. This singlecentre prospective study was conducted between Jan 2015 and 2016.The diagnosis of PTE was reached through spiral angio computed thorax tomography. Serum SCUBE1 was measured on admission. Troponin-T, cardiac enzymes, echocardiography and simplified pulmonary embolism severity index (sPESI) of all the patients were recorded.

Conclusion: SCUBE1 can be used for predicting in patients with PTE. However, further studies are essential, and in particular should include high-risk (massive) pulmonary embolism patients.

Acute Pulmonary Thromboembolism (PTE) is an important common and life-threatening cardiovascular disease. Its symptoms and clinical findings are non-specific. Sudden shortness of breath, chest pain and haemoptysis are its most common symptoms [1]. However, it can be difficult to diagnose PTE as similar symptoms can be seen with many cardiopulmonary diseases. The death rate for cases that are not diagnosed as PTE is approximately 30% [2].

Various methods are used in determining prognosis for acute PTE. ESC 2015 guidelines divide patients into high, medium, high-low and low-risk groups. This classification is used in both treatment options and for determining prognosis [3]. Another prognostic method is the Pulmonary Embolism Severity Index (PESI) and the Simplified Pulmonary Embolism Severity Index (sPESI) which includes fewer parameters. As both the ESC and PESI models include many parameters, problems may occur in actual practice. However, the increase in the levels of certain biomarkers such as troponin T and Brain Natriuretic Peptide (BNP) alone have been associated poor prognosis in patients with PTE [4,5].

Signal peptide-CUB-EGF domain-containing protein1 (SCUBE1) is on the cell surface and is found during newlyidentified early embryogenesis. This protein can be found in platelets and endothelial cells [6]. Platelets are an indicator of activation. SCUBE1 is stored within the alpha granules of inactive platelets. It is translocated on the platelet surface after activation with thrombin and is included in thrombus after being secreted in small soluble bits [7]. It has been demonstrated that serum SCUBE1 levels for diseases such as Acute Coronary Syndrome (ACS) and Acute Ischemic Stroke (AIS) are higher and related to poor prognosis [8]. Previous studies have found that SCUBE1 serum concentration increased with hypertension and crimean-congo haemorrhagic fever compared with the control group, and that increased levels with critical diseases such as severe brain injury, subarachnoid haemorrhage and intracerebral haemorrhage were related to poor prognosis [9-13].

The diagnostic role of SCUBE1 in PTE, an acute thrombotic incident, has been investigated in a small number of the studies. Two recent studies have demonstrated that serum SCUBE1 concentrations levels were high in pulmonary thromboembolism compared with control groups and could be used for diagnostic purposes [14,15]. The aim of our study is to determine the effect of SCUBE1, a new biomarker, on the prognosis of acute PTE and to investigate its relationship with other prognostic factors.

This study was conducted in Recep Tayyip Erdogan University, Medical Faculty, and Chest Diseases Clinic in Turkey. Local clinic ethics committee approval was obtained prior to initiating the study. A total of 49 patients aged older than 20 y that have been hospitalized and treated between 01.01.2015 and 30.01.2016 due to the diagnosis of acute PTE were enrolled into the study. PTE was diagnosed using a Computed Tomography Pulmonary Angiography (CTPA) method to see the least segmental pulmonary arterial filling defect during the standard embolism protocol in the emergency service.

Sample size was calculated with a precision of 1%, an alpha error of 5%, and assuming PTE prevalence around 1%. Thus, the sample size needed for this study was estimated to be 49 patients.

Routine biochemical analyses, complete blood count, troponin T and D-dimer were performed on patients that were included in the study. Wells scoring and PTE risk classification were completed. sPESI scores were calculated in order to evaluate the risk of early mortality. Cases that met one of the criteria of cancer, systolic blood pressure arterial 90-100 mmHg, cardiovascular disease, pulse˃110/min, saturation˂90% and pulse˃110/min were classified as high-risk sPESI.

In order to measure serum SCUBE1, 10 ml venous blood was taken from patients within the first 24 h after being admitted. Blood samples were centrifuged within the first hour after they were received (at a speed of 3000 rpm/min for 10 min). The serum was taken with a pipette and put into Eppendorf tubes. The samples were kept in a -80°C freezer. When the number was adequate, the SCUBE1 measurement was performed. Cusabio, Biotech Co. Ltd., Hubei Province, P.R. China-brand SCUBE1 antibodies were used to do the measurements quantitatively by the Enzyme-Linked Immunosorbent Assay (ELISA) method.

Patients were excluded if they had thrombotic diseases such as acute coronary syndrome and acute ischemic cerebrovascular event, pregnant, and those with acute infection, cancer with no remission, liver cirrhosis, acute or chronic kidney failure and autoimmune diseases.

The mean age of a total of 49 acute PTE patients, 20 male (41%) and 29 female (59%), was 69.4 with the standard deviation of 13.4 y (range of 22-94 y). Out of 54 patients included in the study, 5 were excluded after the discovery of one of the exclusion criteria. sPESI were used for prognostic classification. Of the patients, 30 were low-risk, whereas 19 were determined to be high-risk patients. Patients were categorized as high, intermediate and low-risk patients in terms of early mortality based on the presence of shock and hypotension, right ventricular dysfunction on echocardiography, sPESI and cardiac markers according to ESC 2014 PTE guidelines. There were four high-risk, 40 intermediate-risk and five low-risk patients.

Patient’s clinical features, arterial blood gas values and troponin levels in Table 1 and their demographics and other clinical characteristics with the SCUBE1 levels are shown in Table 2. 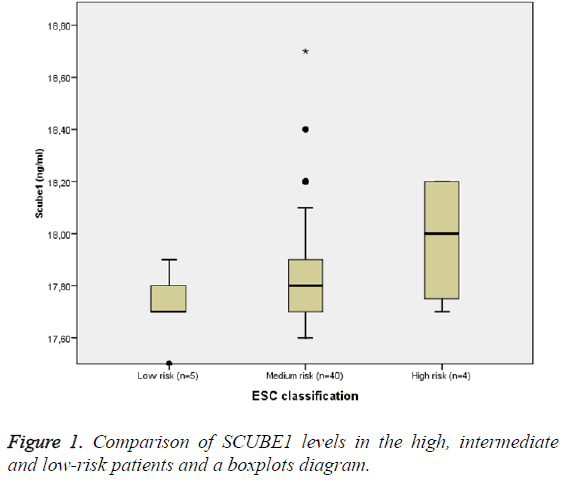 Figure 1: Comparison of SCUBE1 levels in the high, intermediate and low-risk patients and a boxplots diagram. 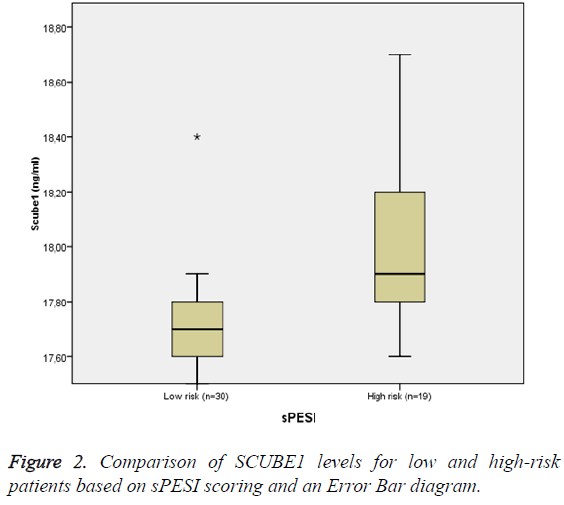 Figure 2: Comparison of SCUBE1 levels for low and high-risk patients based on sPESI scoring and an Error Bar diagram. 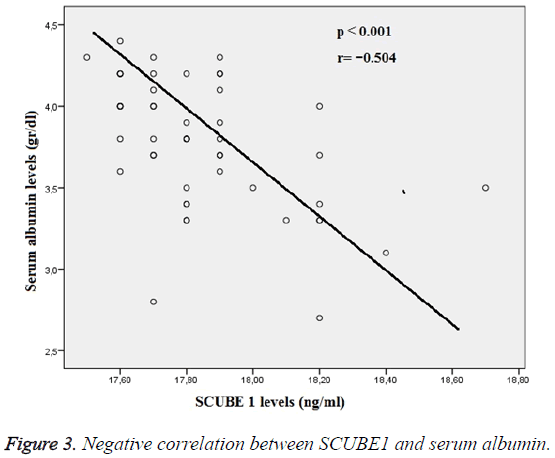 There are a small number of studies that have investigated the relationship between pulmonary embolism and SCUBE1. Turkmen et al. demonstrated that serum SCUBE1 levels were higher in the patients with pulmonary embolism compared with the control group. They claimed that SCUBE1 could be used in diagnosing pulmonary embolism [14]. Similarly, Dirican et al. found in their recent studies that SCUBE1 was significantly higher in patients with PTE compared with a healthy control group, as well as those with diseases apart from PTE. They put forward the possibility that SCUBE1 could be used in diagnosing PTE [15]. We did not come across a study that analyzed the relationship between SCUBE1 and prognosis in PTE. Therefore, one of our fundamental aims with this study was to investigate the relationship between the severity of the disease and SCUBE1. Although SCUBE1 was higher in highrisk patients compared with the intermediate and low-risk patients, there was no significant difference between them. We believe the reason for that is the number of high-risk patients was only four, which is a small number.

The most noteworthy finding of our study was that the serum SCUBE1 level was significantly higher in high-risk patients than low-risk patients based on sPESI. There are a number of studies that showed the effectiveness of sPESI in determining the prognosis for PTE [17,18]. It was not possible to show the relationship between SCUBE1 and mortality due to the fact that there was no death during hospitalization or a one-month follow up. However, it was considered that SCUBE1 was related to poor prognosis as it was elevated in those with higher sPESI. After all, poor prognosis and increased mortality were found related to elevated SCUBE1 levels in critical cases such as brain injury, subarachnoid haemorrhage and intracerebral haemorrhage [11-13].

A number of studies show a positive relationship between SCUBE1 and number of platelets [11,19]. Our study could not reach this finding. We found a strong negative relationship between the SCUBE1 levels and serum albumin in our study. Albumin is a negative acute-phase reactant. Serum levels decrease in many acute infective and inflammatory diseases. Low albumin is related to poor prognosis and mortality in certain diseases. Cho et al. demonstrated that low albumin in acute ischemic stroke causes poor clinical results [20]. Iwaka et al. discovered that hypoalbuminemia caused increased mortality [21]. The strong negative relationship found between SCUBE1 and albumin in our study supports the idea that increased serum SCUBE1 levels are related to poor prognosis.

The effects of SCUBE1 on mortality could not be demonstrated as there were no deaths and there were only a small number of high-risk patients.

Our research is the first study that investigated the effects of serum SCUBE1 on the prognosis PTE. Serum SCUBE1 levels were found high in high-risk patients based on sPESI. This finding gives reason to consider the relationship between SCUBE1 and poor prognosis. In order to obtain more accurate conclusions, further studies designed with a larger size is necessary, with real cases from cardio-vascular emergencies department, cases that might demonstrate the utility of SCUBE1 serum levels as a prognostic factor.