Background: Asthma is an allergic airway inflammatory disease in which B cell activation plays a pivotal role. CXCL13 is a family member of CXC chemokines involved in B cell differentiation and activation. The purpose of this research is to explore the correlation between serum CXCL13 levels and the severity of the disease.

Results: Both the acute bronchial asthma and the chronic persistent groups displayed higher levels of CXCL13, and serum CXCL13 levels in acute asthma patients were higher than those suffering chronic persistent disease. Serum CXCL13 levels in acute bronchial asthma patients were positively correlated with IgE levels and the frequency of Eos, and negatively correlated with FVC%, FEV1% and FEV1/ FVC.

Conclusions: CXCL13 may be an important biomarker of acute exacerbation of bronchial asthma, which concentration might reflect the severity of the disease.

Bronchial asthma is an allergic airway inflammatory disease that involves a variety of cells, such as eosinophils, mast cells, T lymphocytes, neutrophils, smooth muscle cells, airway epithelial cells, etc., and cellular components. It is reported that B cells were required for airway inflammation, Th2 cytokine production, and AHR [1]. Multiple studies have found that B cells play an important role in the pathogenesis of bronchial asthma [2-4]. B cells are generally considered to positively regulate immune responses by producing antigen-specific antibodies [5,6]. B cells synthesize immunoglobulin Ig E following exposure of a dendritic cell to a foreign antigen under the control of CD4+ T-helper lymphocytes [7,8].

CXCL13, also known as the BLC/BCA-1 (B-lymphocyte chemoattractant/B-cell attracting chemokine-1), is a family member of the CXC chemokines. CXCL13 and its receptor play an important role in targeting B cells and the formation of B lymphocyte zone in lymphoid tissues [9]. Interestingly, a high level of expression of CXCL13 mRNA was found in Bronchoalveolar Lavage Fluid (BALF) of bronchial asthma patients [10]. However, there is no evidence on the incidence of CXCL13 in patients with bronchial asthma and lung function currently.

The purpose of this study is to determine the role of CXCL13 in the pathogenesis of bronchial asthma. We performed a correlative analysis between the levels of CXCL13 expressed by circulating B lymphocytes of patients suffering from asthma at various degree of severity, and the levels of IgE, the frequency of Eos, and lung function.

We selected 31 patients diagnosed with typical asthma in acute phase, and 29 patients in chronic stage from the First Affiliated Hospital of Anhui Medical University. Demographics and patient clinical features were shown in Table 1. The main inclusion criteria were a diagnosis of asthma according to the Global Initiative for Asthma 2012 [11]. In addition, 21 healthy subjects were recruited as the control group. There was no significant difference in age and gender among the patients and controls. None of the patients used glucocorticoid during the two weeks prior to testing, nor did they use theophylline or receptor agonists in the 72 h before measurements. Patients were all informed and agreed. The study was approved by Hospital Medical Ethics Committee and all participants provided written informed consent prior to study.

Table 1: Demographic characteristics of AS patients and healthy controls.

Determination of serum CXCL13 levels in asthma patients by ELISA: Peripheral venous blood samples were taken from all subjects. 1000 g of blood was centrifuged for 10 min; serum was frozen at -80°C until testing. CXCL13 and IgE serum levels were quantified using ELISA (CXCL13, R&D Systems, USA; IgE, Bender MedSystems, Austria) according to the manufacturer’s instructions.

Count of Eosinophils in peripheral blood: Venous blood (2 ml) was taken from each subject, and the number of Eos was counted using the Sysmex XE-2100 hematology analyser.

Spirometry: Japan HI-701 spirometer was used for all patients. Three times of FVC (Forced Vital Capacity), FEV1 (Forced Expiratory Volume in one second) and PEF (Peak Expiratory Flow) measurements with stable results were recorded, and the best values were chosen for the study.

CXCL13 and serum IgE concentrations in serum of each group 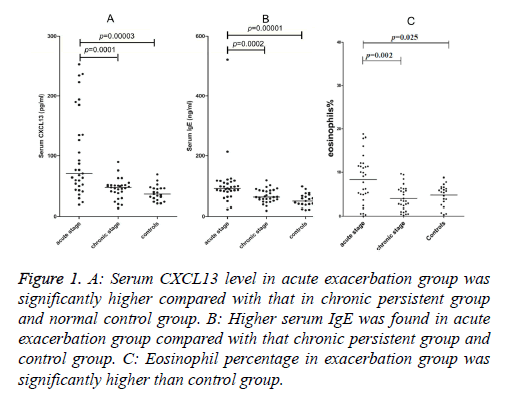 The eosinophil percentage in the blood of each group

Correlations between the level of CXCL13 and IgE, eosinophil percentage or different ventilatory functions in the acute stage of bronchial asthma 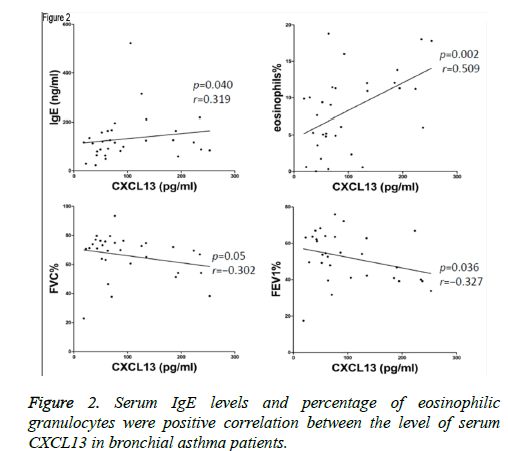 Figure 2: Serum IgE levels and percentage of eosinophilic granulocytes were positive correlation between the level of serum CXCL13 in bronchial asthma patients.

In this study, we found that CXCL13 levels in the serum of patients presenting with acute exacerbated symptoms of bronchial asthma were significantly elevated, which was consistent with increased IgE levels and frequency of eosinophilia. However, CXCL13 was negatively correlated with FVC%, FEV1% and FEV1/FVC.

CXCLl3 is one of the CXC chemokine family factors known as B Cell-Attracting chemokine 1 (BCA-1) or B-1ymphocyte Chemoattractant (BLC). CXCL13, and its receptor, play an important role in B cell targeting, and the formation of the B cell region in lymphoid tissues. High expression of CXCL13 has been reported in various types of lung disease, such as chronic obstructive pulmonary disease [12-14], pulmonary embolism [15], idiopathic pulmonary fibrosis [16,17], lung cancer [18,19]. It has also been reported in other inflammatory diseases such as autoimmune sinusitis [20,21], rheumatoid arthritis [22], Sjogren's syndrome [23], multiple sclerosis [24], lupus kidney [25], optic neuritis [26], which further validated CXCL13 as a crucial factor in the development of chronic inflammatory diseases. Guzman et al. [9] have reported that the expression of CXCL13 is elevated in the lung of OVA-sensitized mice. Interestingly, neutralization of CXCL13 reduced airway inflammation in sensitized mice. This chemokine has been linked to the formation of bronchus-associated lymphoid tissues, B cells, follicular CXCR5+ and cell recruitment. Additionally, higher expression levels of CXCL13 have also been detected in BALF from patients with asthma than healthy subjects, which is in agreement with the results generated in this study. High levels of CXCL13 may promote humoral immunity and enhance an autoimmune inflammatory component in asthma patients. We also found that high levels of serum CXCL13 were consistent with elevated levels of IgE in patients with acute asthma. Thus, CXCL13 may reflect the inflammation level of bronchial asthma.

IgE is the fifth and the last discovered immunoglobulin, which is a key factor of asthma airway hyperreactivity induction. Epidemiological studies have shown that total levels of IgE in asthma patients were higher than in non-asthmatic subjects, especially children [27-29]. A recent survey from the European Community Respiratory Health showed that total IgE was related to atopic allergic new-onset asthma [30,31]. Marco et al. have studied 856 cases of asthma in Europe and found that high levels of IgE tend to correlate to moderate to severe asthma [32]. CXCL13 promotes B cell translocation to sites of inflammation to be further activated via CXCR5 receptor ligation on the B cell surface, which may in turn increase IgE synthesis. This hypothesis could explain the increase of CXCL13 and IgE in patients with asthma, as well as their positive correlation.

Eosinophils are a major effector component in bronchial asthma and play a key role in allergic inflammatory diseases. We reported that serum CXCL13 levels were positively correlated with frequency of eosinophilia. Previous studies have shown that high levels of eosinophil of asthma patients were related to decreased FEV1 [33,35]. Thus, the percentage of eosinophils was used as an indicator of airway inflammation. In the present study, the percentage of eosinophil was positively correlated with CXCL13, which is in agreement with our hypothesis that elevated CXCL13 may enhance inflammation in patients with acute bronchial asthma.

Moore et al. have reported that significant changes in lung function were observed in patient with occupational asthma as shown by decreased PEF ratio in the afternoon and evening in comparison to daytime [36]. Yamasaki et al. further pointed a relationship between sleep disorder in asthma patients and reduced lung function [37]. However, the correlation between lung function in patients with acute exacerbation, chronic persistent bronchial asthma or healthy subjects with serum CXCL13 levels has not been studied. In this study, we found that lung function, measured by FVC%, FEV1% and FEV1/ FVC, in patients presenting with acute exacerbation of bronchial asthma were lower than in patients suffering from chronic persistent asthma or than the healthy group, suggesting airflow limitation and a ventilatory function decline during the acute exacerbation of bronchial asthma. Serum CXCL13 level of asthma patients was negatively correlated to FVC%, FEV1%, suggesting that airway inflammation and airway limitation was progressively increased. However, the correlation of CXCL13 level and FEV1%/FVC was not statistically significant, which might be due to the relatively limited number of samples.

CXCL13 concentration seems to be related to the severity of acute bronchial asthma. However, due to the limited number of samples in this study, more work has to be performed to evaluate CXCL13 as a new target in the treatment of asthma.