Electroencephalogram and cerebral hemodynamic monitoring in pediatric patients with sepsis and septic shock.

Introduction: Sepsis-Associated Brain Dysfunction (SABD) is a potentially fatal but treatable mental impairment induced by underlying sepsis that is related to impaired cerebral auto regulation, leading to cerebral hypo or hyper perfusion. The present study attempted to monitor the cerebral hemodynamics as well as Electro Encephalon Gram (EEG) findings in pediatric patients suffering from sepsis and septic shock. Methods: The current case-control study recruited 56 children hospitalized to the PICU with septic shock or sepsis. Trans cranial Doppler parameters (Resistive Index (RI), Plasticity Index (PI), median Velocity in Middle Cerebral Artery (mVMCA), Vasomotor Reactivity (VMR) and Cerebral Blood Flow Index (CBFi) were assessed daily, along with a daily 10-minutes EEG recording for the predominant brain electrical activity during the first four days of admission. Results: The study comprised 20 children with sepsis, 16 with septic shock and 20 age and sex matched non-septic critical children (pSOFA score 3.2 ± 2.1, 7.3 ± 3.9, and 0.5 ± 1.1 respectively). Compared to control and sepsis groups, patients with septic shock had a significant increase in PI, mVMCA, and CBFi at hours 48 and 72 of enrollment, while cerebral VMR was disturbed at hours 24 and 48? RI remained unchanged in septic shock patients. Excessive theta waves were the most prominent EEG pattern in the first 24-48 hours in septic shock patients, followed by burst suppression at hour 72. Conclusion: Most patients with septic shock experienced impaired cerebral vasomotor reactivity and EEG changes in the first two days that precede changes in PI and CBFi.

Sepsis-Associated Brain Dysfunction (SABD) is a diffuse brain impairment that develops in patients with infection, accompanied by a systemic inflammatory response, but with no laboratory or clinical evidence of direct infection of the brain [1,2]. According to the literature, more than 70% sepsis cases experience encephalopathy symptoms [3]. An important point is the fact that mortality directly correlates with the severity of SABD [4].

Pediatric patients who suffer from SABD need specialized treatment since the occurrence of encephalopathy with sepsis elevates mortality to 50% compared to 26% in non-encephalopathy cases [4]. There is a paucity of literature on studies of SABD in pediatric patients with sepsis and septic shock. Consequently, the present study attempted to study the cerebral hemodynamics as well as EEG findings in pediatric patients with septic shock and sepsis after being admitted to the intensive care unit compared to non-septic controls.

The present case-control study was carried out in our 32-beds (PICU) of children's hospital, Ain Shams University, Cairo, Egypt, during a 19-month period (June 2019-January 2021). The ethics committee of the faculty of medicine's ethical committee, Ain-Shams University authorized the protocol of the current study, and informed consent was provided by the participants' legal guardian/parent. Pediatric patients were eligible if they were 1-60 months old and had septic shock or sepsis in accordance with the third international criteria definitions for septic shock and sepsis with the calculation of pSOFA score [5]. Exclusion criteria were: 1) Patients beyond 60 months of age, 2) with cerebral infections, 3) known cerebral lesions (hemorrhage, stroke, tumors), 4) known to be epileptic, 5) with history of inborn errors of metabolism, and 6) with disturbed conscious level due to intoxication to drugs.

The included patients were further subdivided into three groups, according to pSOFA score, as follows: 20 patients with sepsis, 16 subjects with septic shock, and 20 healthy subjects as controls. Demographic data, including age, gender, duration of PICU stay, cause of sepsis, in addition to related microbiological outcomes, were collected. Laboratory and clinical data regarding the failure of the organ were also collected. Neurological examination was daily performed, including full unresponsiveness outline FOUR score, assessment of pupils, tone, and deep tendon reflexes with a calculation of COMFORT score in sedated patients.

Transcranial doppler sonography was performed daily for 4 continuous days using general electric medical ultrasonography machine (Model: SAMSUNG HM70A, SAMSUNG ELECTRONICS, Hampshire-United Kingdom). A 2-MHz transducer was placed at the left side of the skull through the transtemporal acoustic approach (placed just anterior to the tragus of the ear and superior to the zygoma), where M1 portion of the middle cerebral artery (MCA) could be accessible. All patients were supine with elevated head of no more than 30o. We calculated Pulsatility Index (PI= ), resistive index (RI= , Mean Velocity in Middle Cerebral Artery (mVMCA) as well as Cerebral Blood Flow Index (CBFi= ), in which MAP indicates mean arterial pressure. Cerebral Vasomotor Reactivity (VMR) by CO2 reactivity test was performed by lowering the initial PaCO2 of each patient by at least 6 mmHg by controlled hyperventilation and calculated as follows:

The tabulation as well as statistical analysis of data was performed utilizing Statistical Package for Social Sciences (SPSS) software, version 20 (SPSS Inc., Chicago, IL). The expression of qualitative data was in the form of and percentage (%) and frequencies (n). Quantitative data were expressed as Standard Deviation (SD) and medians. ANOVA test as well as independent t-test was utilized for comparison of quantitative variables. Fisher exact test was used to test the association between qualitative variables. Pearson correlation coefficient was utilized for correlation between quantitative variables. The level of significance was determined at p-value ≤ 0.05.

Table 1. Physiological and clinical data of the studied groups.

Regarding transcranial doppler ultrasonography parameters (pulsatility index, resistive index, mean velocity in the MCA, and cerebral blood flow index) during the time of enrollment, the present study did not detect any substantial differences among the control, sepsis, and septic shock groups (Table 2).

However, pulsatility index was decreased at hour 24 of enrolment in the three studied groups compared to initial PI value, with subsequent increase at hour 48, with the septic group patients having higher PI values compared to other two groups. mVMCA and CBFi were initially decreased, followed by a remarkable increase in the septic shock group at hour 48 and 72 of enrollment, respectively (Figure 1). 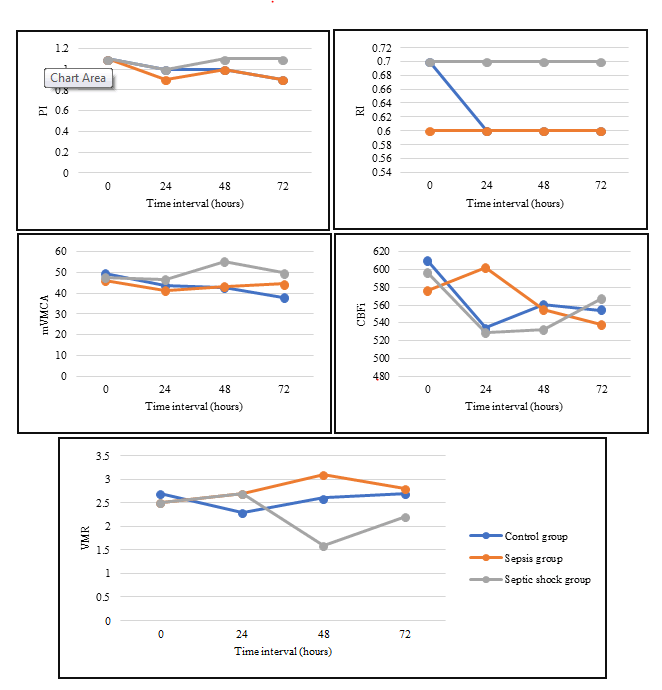 Also, resistive index remained unchanged in both sepsis and septic shock groups along the whole-time interval of the study in Figure 1. The cerebral vasomotor reactivity evidenced by CO2 reactivity was noticeably disturbed at hour 24-48 of enrolment in septic shock patients compared to control patients (Figure 1).

Regarding EEG patterns, the present study found that excessive theta waves were the most prominent pattern change in the first 24-48 hours. This was followed by burst suppression pattern at hour 72 in septic shock patients (Figure 2). Mortality among those with burst suppression was 100%.

Figure 2. Change in EEG patterns over the time-interval of the study in the three studied groups.

The correlation between septic shock and severe sepsis as well as elevated cerebral vascular resistance as evaluated by TCD calculated RI and PI, has previously been reported in adult patients [7]. There is a paucity of studies on SABD in pediatric patients with septic shock and sepsis. Consequently, the present study aimed to study the cerebral hemodynamics as well as EEG findings in pediatric patients after being admitted to the intensive care unit with sepsis and septic shock compared to non-septic controls.

The present study showed that most patients had a high PI at some point during enrollment. Knowing that increased PI is associated with increased cerebral vascular resistance, we suspect that most patients showed cerebral microcirculation impairment. Also, patients with high PI showed a lower mean mVMCA and CBFi compared to those with lower PI. This finding potentially resulting in a decrease in CBF in these patients. Thus, patients with septic shock may be exposed to a decrease in CBF because of increased cerebrovascular resistance and disturbed cerebral auto regulatory mechanisms. The significant PI elevation was observed in many other studies [8-12].

Most patients with septic shock experienced impaired cerebral vasomotor reactivity and EEG changes in the first two days that precede changes in PI and CBFi.

The authors thank the participants who were all contributed samples to the study. I thank Professor Hanan M Ibrahim and Professor Mervat Gamal for their support and my mentor Rezk for his continuous help and support.