Methods: Sixty patients contributed to the study prospectively. Cases were divided into three groups (mild, moderate, severe) on the basis of MVS and PAP.

Conclusions: According to our knowledge, this is the first study to show the superiority of EHRCT over PFT (FEF25-75%) in showing SAD in patients with isolated MVS (mild and moderate stages but not in severe MVS) without additional respiratory disease.

Small airways are structures with internal diameters of less than 2 mm containing no cartilaginous tissue. In healthy individuals, 80% of total airway resistance derives from the trachea and the large airways, while less than 20% derives from small airways. Small airway diseases (SAD) are defined as pulmonary dysfunction together with inflammatory and/or obliterate changes in small airways. Since the small airways represent a very small part of total resistance, there is no significant decrease in flow speeds in small airway obstruction, and it is therefore difficult to determine obstruction with routine spirometric tests. Forced expiratory flow at 25-75% of FVC (FEF25-75%) value is quite sensitive in determining SAD. FEF25-75% being below the expected value (FEF25-75% <80%) while FEV1 and FVC values are normal shows obstruction in the small airways [1].

Hypertrophic changes in the pulmonary arterioles associated with high pulmonary vascular pressure occur in mitral valve stenosis (MVS), particularly small airways disease (SAD), are seen in this condition [2,3]. As a result, the pulmonary parenchyma loses elasticity and becomes less compliant. Air trapping is added to the picture as this process advances [4,5]. Air trapping refers to retention of excess gas “air” in all or part of the lung, especially during expiration, either as a result of complete or partial airway obstruction or as a result of local abnormalities in pulmonary compliance. In pulmonary vascular diseases associated with local hypoxic reflex vasoconstriction in the small airways, a decreased dimension and number of vessels is observed in areas of pulmonary lucency in association with underlying hypoperfusion. These areas also emerge as air trapping in the small airways on expiratory high resolution computed tomography (EHRCT) scans. Differentiation is assisted if these areas do not remain hyperlucent at the end of expiration [6]. EHRCT is a special imaging method that facilitates the diagnosis of SAD showing the areas of air trapping in small airways. The presence of air trapping in EHRCT is the one of the indirect radiological finding of SAD. In additional to this, EHRCT plays a complementary role to PFTs in the small airways by showing SAD and air trapping in cases with normal PFT values [7].

The study was planned prospectively. EHRCT was compared with PFT in patients with isolated MVS. Patients’ demographic characteristics, PFT values, ECHO reports, symptoms and findings were collected from medical records and recorded.

The study commenced following receipt of local ethical committee approval. Sixty patients were included in the study. All patients had shortness of breath with isolated MVS determined by the same cardiologist at echocardiography (ECHO). PFT and inspiratory and EHRCT were performed for differential diagnosis of shortness of breath. Patients with leftsided heart failure, coronary artery disease, moderate or severe mitral insufficiency, myocardial disease, pulmonary or aortic valve disease, chronic obstructive pulmonary disease, allergy/ atopy or a history of smoking were excluded.

This was performed with the PFT (with a Sipro Analyzer ST-300-Fukuda-Sangyo device). The PFT was performed three times for each patient, and the highest value was included in the study. The observed or measured values were expressed as a percentage of predictive values which were computed according to age, sex, weight, and height and were considered normal if they were >80% of predictive values. FVC, FEV1 and FEF25-75% were measured at PFT.

This represents mid-expiratory flow, that between the first and last quarters of forced expiration (in other words, the flow of the 50% volume once the first 25% of air has been expelled). It constitutes the effort independent part of forced expiration. It shows obstruction in the airways in the early period. FEF25-75% being below the expected value (FEF25-75% <80%) while FEV1 and FVC values are normal shows obstruction in the small airways [1].

HRCT was performed using a Siemens Somatom Sensation 16 (Siemens, Germany) device. Patients were placed in the supine position and asked to hold their breath following deep inspirium and scanned without contrast from the apexes of the lung to the lowest point of the hemidiaphragm. Following deep inspirium, patients performed forced expirium and were scanned again. Images for 16-detector CT were obtained with parameters of 120 kV, 125 active mA, 16 × 1.5 mm collimation, 3 mm section thickness and a 512 × 512 matrix. Axial images were obtained on standard mediastinal (50 HU, 400 HU) and parenchymal (-600 HU, 1500 HU) window settings. High geometric resolution images (bone algorithm) re-construction was performed with parameters of 120 kV, 170 active mA, 10 mm intervals and a 0.75 mm section thickness and a 512 × 512 matrix for HRCT. Images were examined at the parenchymal window setting (-600 HU, 2000 HU). Images were evaluated by a radiologist. Lucent areas identified at inspiratory and EHRCT were interpreted and evaluated as radiological appearance associated with SAD. 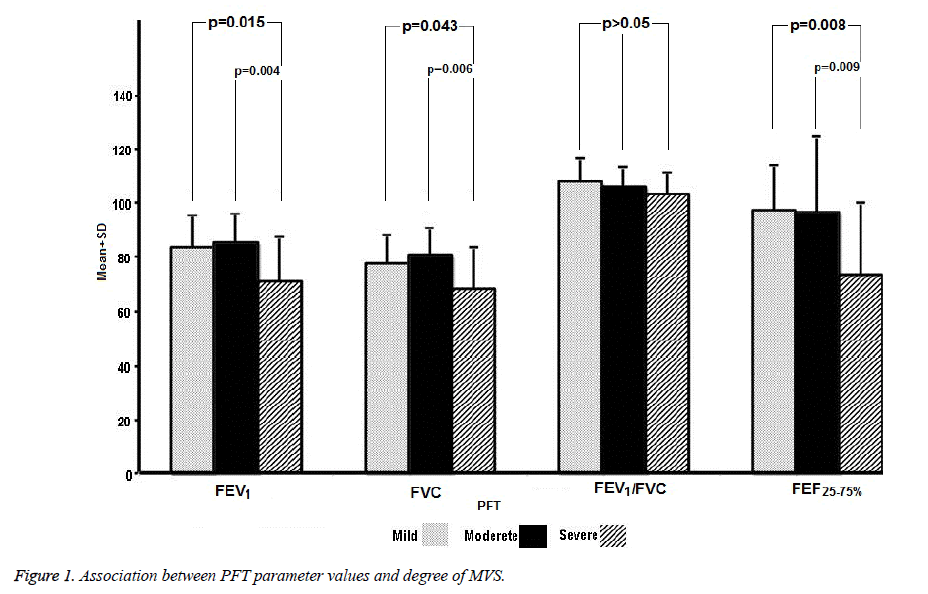 Figure 1: Association between PFT parameter values and degree of MVS.

Statistically significant difference was determined in mean FEV1 values depending on cases’ PAP classifications (p=0.001). Mean FEV1 values of group-3 cases based on PAP values were significantly lower than those of group-1 cases (p=0.032). No significant difference was observed between group-2 cases’ FEV1 levels and those of groups-1 and groups-3 (p=0.299, p=0.494). No statistically significant variation was observed in mean FVC and FEV1/FVC% values between the groups (p>0.05). 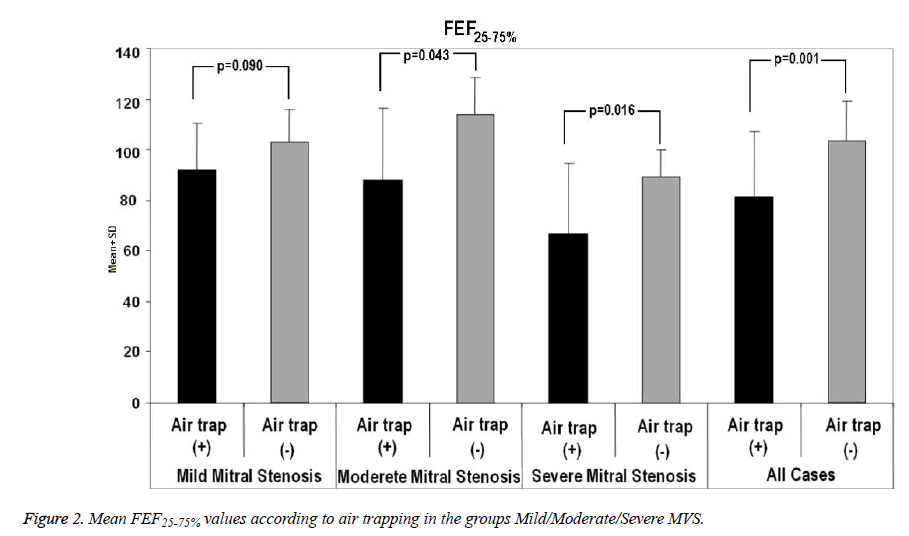 Figure 2: Mean FEF25-75% values according to air trapping in the groups Mild/Moderate/Severe MVS.

Table 1. Mean FEF25-75% values according to air trapping in the groups Mild/Moderate/Severe MVS.

The most independent PFT value showing SAD is FEF25-75%. This value being below 80% is significant in terms of SAD. We observed a significant decrease in FEF25-75% in all patients with MVS such as to indicate SAD. The FEV1/FVC% values of groups were within normal limits and we determined no statistically significant variation in mean FEV1/FVC% values (Table 2). Expiratory HRCT is more sensitive than the PFT in determining the air trapping seen in SAD in most cases [7,8]. Patients with clinical respiratory symptoms with isolated MVS should be investigated by EHRCT, even though FEF25-75% values are normal. In present study, we observed the presence of air trapping at EHRCT and based on FEF25-75% values revealed a significant difference between the two methods in the cases of mild and moderate MVS (p=0.021, p=0.016). However, in cases of severe MVS, there was no significant difference between the two methods (p=1.000) (Table 1). The results revealed that EHRCT is superior to the PFT at showing SAD in patients with mild and moderate isolated MVS.

Table 2. Mean values for SFT parameters and PAP according to degrees of MSV and demographic characteristics of patients.

Chatterji et al. reported findings showing that FVC values decreased in direct proportion to PAP, and that PFT values were correlated with degree of severity of MVS and PAP, and also showed the presence of SAO [9]. Dogliotti et al. also observed similar spirometric findings [10]. Similar findings also emerged from our study. The lowest FEV1 and FEF25-75% values were observed in patients with severe MVS and PAP values >50 mmHg. FEV1 and FVC values decreased significantly as severity of MVS and PAP values increased, in such a way as to show restrictive type disorder (Table 3).

In conclusion, to the best of our knowledge, this is the first study to show the superiority of EHRCT over PFT value (FEF25-75%) in showing SAD in patients with isolated MVS without additional respiratory disease. EHRCT is more useful than FEF25-75% in showing air trapping and SAD in patients with mild and moderate stages of isolated MVS but not in severe MVS. A decrease in FEF25-75% values, statistically significant and exhibiting reverse correlation with degree of severity of MVS and PAP elevation, occurs in patients with isolated MVS without additional respiratory disease. We think that these results will contribute to early diagnosis and treatment of diseases of the SAD with isolated MVS. We also think that early bronchodilator therapy can be clinically useful in cases with symptoms among patient with MVS.

There is some limitation of our study. The study was conducted in single centre and the number of patients participating in the study is relatively low. If the number of patients with mitral valve stenosis involved in the study was higher, the literature contribution of the results obtained at the end of this study might be higher. We nevertheless believe that this study may also open the door for similar studies to be made in the future.