Background: Excessive mucus secretion is an important characteristic of airway inflammatory diseases, such as asthma. Lipopolysaccharide (LPS) leads to mucus hypersecretion in asthma, and is associated with airway inflammation and remodeling. It is known little about the role of epidermal growth factor receptor (EGFR) in LPS-induced mucin 5AC (MUC5AC) hypersecretion in human bronchial epithelial cells. We aim to investigate the effects of EGFR in the process of MUC5AC hypersecretion.

Asthma is one of the systemic inflammatory diseases, which is characterized by airway remodeling and airway inflammation, airway smooth muscle cell hyperplasia, mucus hypersecretion. The bronchial epithelial cells are affected firstly during the pathophysiologic process of asthma, which are associated with the airway inflammation, airway hyper-responsiveness, and airway remodeling. Mucus hypersecretion is one of the pathophysiological features of asthma, which can lead to airway obstruction.

A variety of inflammatory mediators, pathogenic microorganisms and their metabolites, cold air, proteases can promote the secretion of mucins, which are the main components of mucus [1,2]. Bacterial infection is one of the main factors which can induce mucus hypersecretion, and result in glandular secretion, airway damage and airway remodeling. LPS is a major component of gram-negative bacteria wall and can increase mucin5AC (MUC5AC) expression in a variety of tissues and cells [3,4]. LPS can damage the airway epithelial cells, destroy the defence barrier of airway and induce MUC5AC hypersecretion.

Detection of MUC5AC in the cell culture supernatant

After 24 h, the cell culture supernatant were collected at different time points (6 h, 12 h, 24 h), and centrifuged for 20 min at 1000 × g at 2-8°C. The level of MUC5AC in the supernatant was measured by Enzyme-linked Immunosorbent Assay (ELISA) (the sensitivity was 0.188 pg/ml) according to the instructions provided by manufactures (Elabscience, Wuhan, China). The optical density (OD) was detected at a wavelength of 450 nm, and the OD value was proportional to the concentration of MUC5AC.

The expression of MUC5AC and EGFR were detected with IHC according to the instructions of the immunohistochemical kit. The 16HBE cells were fixed with Paraformaldehyde. Antigen retrieval was performed by incubating with the 1% BSA for 1 h at 37°C in the incubator after the elimination of endogenous peroxidase activity with 3% hydrogen peroxide for 10 min. The 16HBE cells were subsequently incubated with monoclonal anti-MUC5AC and anti-EGFR antibody (1:200, purchased from Abcam Co., Shanghai, China) respectively at 4°C overnight. The horseradish peroxidase labelled goat antimouse antibody was used as the secondary antibody reagent and then stained by diaminobenzidine (DAB) kit. The anti- MUC5AC and anti-EGFR antibody were substituted with PBS buffer as the negative control. The integrated optical density of positive stain in the 16HBE cells were detected by Image-Pro plus 6.0 Software.

The 16HBE cells were lysed in RIPA lysis buffer for 2 h at ice and centrifuged for 10 min at 4°C. After removal of cell debris by centrifugation (12,000 g, 10 min), equal amounts (40 μg) of proteins were separated by 10% SDS-PAGE and transferred onto nitrocellulose membrane. Nonspecific reactivity was blocked in 5% non-fat milk in TB-ST for 1 h at room temperature. The membrane was then incubated with monoclonal antibody of mouse anti-EGFR (Santa Cruz) followed by reaction with anti-mouse IgG-HRP antibody. Specific protein bands were photographed and the immunequantification of reactive proteins was performed by ECL chemiluminescence system (Santa Cruz).

Total RNA was extracted with trizol and reverse transcribed. The cDNA synthesis were performed according to the manufacturer’s instructions (SYBRGreen PCR kit, TaKaRa, China).The PCR reactions were performed at 94°C, degeneration for 3 min, followed by 40 amplification cycles at 94°C for 20 s, 55°C for 20 s, and 70°C for 20 s. GAPDH mRNA was used as an internal control to standardize the RNA input. Primer sequences for target genes in the studies are shown in Table 1. Relative quantitation of the MUC5AC mRNA and EGFR mRNA were obtained by the 2-ΔΔCT method.

Table 1. Primer sequences in the study.

Measurement data were expressed as mean ± SEM and analyzed with SPSS 16.0 statistical software. The comparisons between different groups were performed by t-test. Statistical significance was set at P<0.05.

LPS up-regulated the expression of MUC5AC in 16HBE cells

The IHC analysis shown that MUC5AC were expressed in the cytoplasm of human bronchial epithelial cells, and stained brown. LPS induced the significantly increasing expression of MUC5AC than control group cells (P<0.05), and the expression were down-regulated after treatment with AG1478 (P<0.05). The level of MUC5AC in the cell culture supernatant was also higher than normal control group (P<0.05). AG1478 decreased the expression of MUC5AC compared with group B. There is no difference between group A and group C (Figure 1 and Table 2).

Table 2. The levels of MUC5AC in different groups (ng/ml) (ELISA).

The expression of MUC5AC mRNA in different groups

The level of MUC5AC mRNA in the 16HBE cells significantly increased after treating with LPS compared with control group, and AG1478 decreased its higher expression induced by LPS. AG1478 did not decrease the expression of MUC5AC mRNA in group C versus group A (Figure 2). 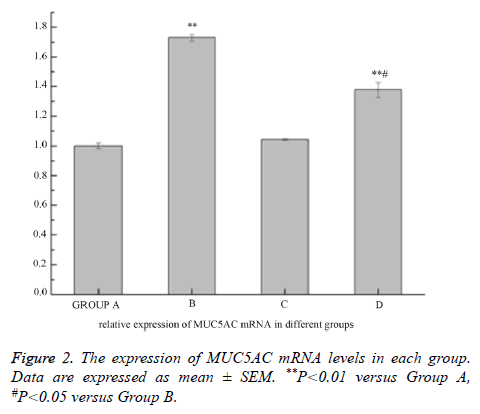 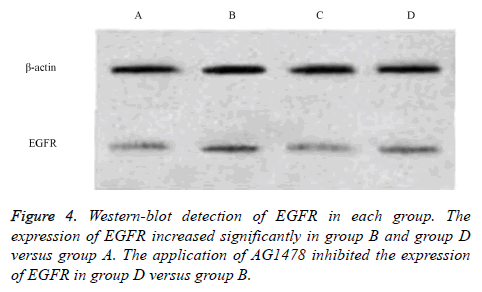 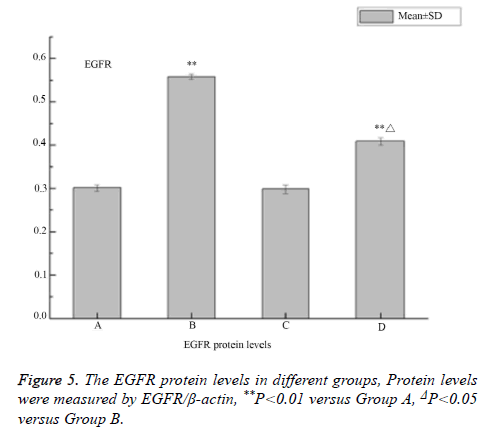 The expression of EGFR mRNA increased by LPS

The mRNA level of EGFR increased significantly after intervention with LPS in the 16HBE cells, and its higher expression could be decreased by AG1478 (Figure 6). 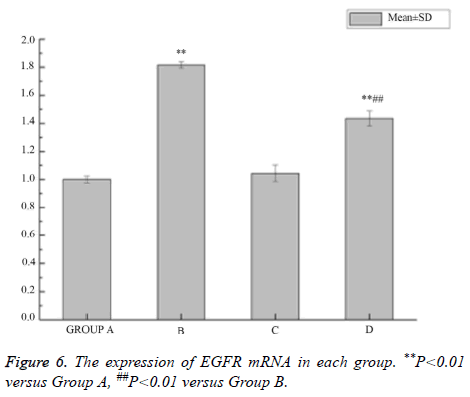 Mucus is the main defence barrier against the damage factors in the airway. Mucus hypersecretion is an important characteristic of airway inflammatory diseases, such as asthma, chronic obstructive pulmonary disease and cystic fibrosis. MUC5AC is a major component of mucus in airway epithelial cells and regulated by means of an epidermal growth factor receptor (EGFR)-signaling pathway [9]. A variety of inflammatory mediators, pathogenic microorganisms and their metabolites, cold air, proteases can promote the secretion of MUC5AC, and then induce glandular secretion and airway obstruction, which are the main factors of cough and sputum. LPS is one of the initiators of inflammation, which is the main component of gram-negative bacteria cell walls. It can result in mucus hypersecretion, airway inflammation and oxidative stress etc. There were many reports that LPS increased the higher expression of MUC5AC in human intrahepatic biliary epithelial cells by up-regulating the expression of EGFR [3,4,9]. In the present study, we found that LPS up-regulated the MUC5AC expression in 16HBE cells, and promoted the expression of EGFR at the same time. We speculated that EGFR may play an important role in the process of mucus hypersecretion.

EGFR is existed in the basal cells, secretory epithelium and interstitial cells of the lung with little expression at normal conditions. It is involved in the regulations of growth and differentiation of the cells. Studies have shown that EGFR expressed highly in some diseases, such as non-small cell lung cancer, asthma and chronic obstructive pulmonary disease. Asthma is a chronic inflammatory disease and involved in a variety of cells and cell components during its pathological process, which resulted in airway remodeling and airway inflammation including goblet cell and airway smooth muscle cell hyperplasia, mucus hypersecretion and so on. EFGR plays an essential role in injury and repair process of the tissue and cells during the pathophysiologic process of asthma. Studies have shown that EGFR was expressed higher in the airway epithelial cells and airway smooth muscle cells in patients with asthma than normal person [10]. The expression intensity of EGFR was positively correlated with the damage of airway epithelial cells, which may increase hormone resistance in patients with asthma. EGFR can be activated by several potent ligands and increase the MUC5AC expression in different cell types [4,11-16].We found that LPS could activate EGFR and increase the MUC5AC expression in the 16HBE cells. These studies suggest that high expression of EGFR may be one reason for mucus hypersecretion in airway inflammatory diseases, which is accordance with our results.

AG1478 is one of tyrosinekinase inhibitors, which can inhibit the activity of EGFR tyrosine kinase with high selectivity. Studies have shown that AG1478 inhibited the activity of EGFR through binding the ATP competitively, and then blocked signal pathways mediated by EGFR, which can result in cell apoptosis at a dose-dependent manner [12]. AG1478 significantly inhibited the secretion of MUC5AC and IL-8 of NCI-H292 cells induced by LPS [13]. Shown in a study in vivo, intranasal instillation of AG1478 for an hour could significantly inhibit goblet cell metaplasia, mucus production, and neutrophil infiltration after intranasal LPS instillation in rat nasal epithelium. Our results showed that AG1478 could significantly decrease EFGR expression in the 16HBE cells and inhibit LPS-induced MUC5AC overexpression, indicating EGFR playing an important role in MUC5AC overexpression induced by LPS in the 16HBE cells. In the present study we found that blocking EGFR can inhibit LPS-induced MUC5AC hypersecretion in the 16HBE cells, indicating the potential target function of EGFR.

In summary, our results suggested that EGFR play an essential role in LPS-induced mucus hypersecretion and its inhibitor AG1478 could prevent the excessive mucus secretion, and may be used as an effective pharmacotherapy for airway inflammatory diseases, such as asthma.

The authors report no conflicts of interest. The authors alone are responsible for the content and writing the paper.