Efficacy of valproate on electroencephalography and obesity in children with epilepsy

2Department of Pediatrics, the First Hospital of Yulin, PR China

Objective: To observe and evaluate the efficacy of valproate on electroencephalography and obesity in children with epilepsy.

Methods: 109 children with epilepsy in our hospital were selected from September 2014 to October 2017, and randomly divided into the control group and the treatment group. 52 cases in the control group were treated with levetiracetam; and the other 57 cases in the treatment group received Valproate. The efficacy, the results of electroencephalography, the body mass index, the serum values of leptin, adiponectin, leptin/adiponectin of patients in the two groups were evaluated and compared.

Conclusion: It’s suggested that valproate improve the electroencephalography and clinical systems of children with epilepsy, but valproate induce the obesity which could be relative with the serum values of leptin, adiponectin, leptin/adiponectin.

Pediatric epilepsy is one of the most common nervous system diseases. It needs long-term administration of anti-epileptic drugs to control [1]. Among them, sodium valproate is one of the most commonly used and safer broad-spectrum antiepileptic drugs in clinic. But in the long-term medication process, many cases of adverse reactions appear gradually, among which the most common side effect is the influence of metabolism and endocrine function of children, which can easily lead to obesity in children [2]. Children are in the growth stage, and their weight is related to age, height and sex. Among them, leptin, adiponectin and other metabolic regulation factors play an important role in the balance of energy metabolism and lipid metabolism [3,4]. At present, there is still a lot of controversy in the medical field about whether the pathogenesis of obesity induced by valproate sodium is related to the above metabolic indexes. In this study, the changes of serum leptin, adiponectin, leptin/adiponectin and other metabolic related indexes were overall monitored in children with epilepsy who had been taking valproate for a long time. Meanwhile, the efficacy of valproate sodium in the treatment of epilepsy in children and the metabolic mechanism of induced obesity were explored, so as to provide a theoretical basis for reducing the risk of obesity. The present study is as follows.

The observational cases of this study were 109 children with epilepsy who were admitted to our hospital from September 2014 to August 2017, and their diagnosis was consistent with the epilepsy seizure criteria established by the International Union against Epilepsy in 2001. Among them, 63 cases were male, and 46 cases were female, aged from was 6 months to 16 y old with the average age 6.31 ± 4.09 y old; the Body Mass Index (BMI) was 15.91-19.38 kg/m2, and the mean BMI was (18.64 ± 1.05 kg/m2). According to the random number table method, the children were randomly divided into the control group and the test group. In the control group, 52 patients were treated with levetiracetam, and 57 patients in the test group were treated with sodium valproate. The study was approved by the ethics committee of our hospital. There was no significant difference between the two groups in general information such as sex, age, BMI and so on with P>0.05, which was comparable. General data analysis of selected children is shown in Table 1.

Inclusion criteria for the patients (1) meet the diagnostic criteria of epileptic attack developed by the International Union against Epilepsy in 2001; (2) no history of nervous system diseases; (3) children with natural condition; (4) informed consent signed by family members or guardians of children.

Exclusion criteria for the patients (1) children who did not meet the above inclusion criteria; (2) children complicated with other serious diseases, such as heart, liver, kidney, hematopoietic system, endocrine system and other major diseases; (3) have been taken drugs that affect liver drug enzymes or anti-blood lipids before; (4) take other drugs in midway of the treatment without authorization; (5) children who were stopped from the treatment; and so on.

(3) Effective: the clinical symptoms were relieved and the epileptic attack frequency decreased more than 50%;

(4) Ineffective: the clinical symptoms were no better than before treatment, and the number of epileptic attack decreased <50%. 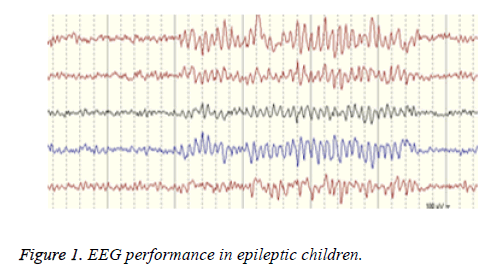 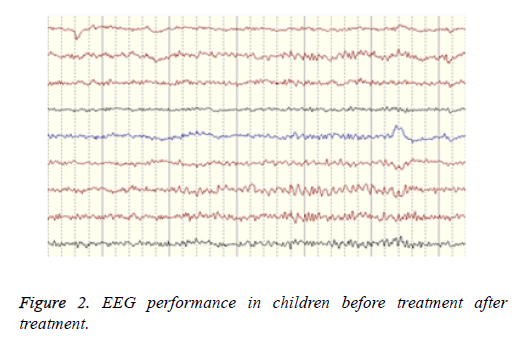 Figure 2: EEG performance in children before treatment after treatment.

Comparison of clinical efficacy in children between the two groups After 6 months of treatment, the total effective rate of the children in the control group and the test group was respectively 75% and 87.72%, which was statistically significant, P<0.05, as seen in Table 2.

Table 2. Comparison of clinical efficacy in children between the two groups (n, %).

Table 3. BMI changes of the children in two groups before and after treatment (x̄ ± s).

Table 4. Changes of metabolism related indexes in children before and after treatment in two groups (x̄ ± s).

Pediatric epilepsy is one of the most common nervous system diseases in children, which is necessary to rely on antiepileptic drugs for a long time to control [6]. EEG is the most commonly used diagnostic method in clinic. Through scanning the brain waves of the children, amplifying the bioelectricity of the brain tissue, analyzing the waveform, frequency, amplitude, position and phase and so on, it is diagnosed whether the brain tissue of the child is injured or not [7]. In this study, after the children were treated with levetiracetam or sodium valproate for a long time, EEG results was significantly improved, which showed that levetiracetam or sodium valproate was more effective in the treatment of epilepsy in children. However, through comparison of comprehensive treatment results, the total effective rate of sodium valproate was higher than that of levetiracetam (P<0.05). Sodium valproate is a traditional broad-spectrum antiepileptic drug, which is safe and has a definite mechanism of action. Its curative effect is remarkable for large or small attack in primary epilepsy, and not good for partial epilepsy attack [8]; however, levetiracetam is a new antiepileptic drug researched and developed in recent years, which is mainly used in the treatment of partial epilepsy attack. Because of the special structural type and not clear mechanism of action, it is speculated that it may be related to the association with synaptic vesicles in the brain [9].

Although sodium valproate is more effective in the treatment of epilepsy, it has been controversial that sodium valproate easily induces secondary obesity in children [10]. Some studies have pointed out that sodium valproate does not have a significant effect on weight in children [11]. Studies have also suggested that sodium valproate significantly increased weight gain in children [12]. The assessment of obesity does not depend solely on changes in body weight, and it is generally considered clinically that body mass is an important indicator of obesity. The results of the study showed that the average BMI in children treated with sodium valproate for 6 months was significantly higher than that in the pretherapy group and the control group (P<0.05). Obesity in children affects growth and development as well as confidence in treatment, so the side effects of sodium valproate treatment should be taken seriously. Leptin and adiponectin are hormones secreted by adipose tissue that regulate energy metabolism. Through combination with leptin receptor in hypothalamus, leptin affects the secretion of a variety of central neurohormone, thereby promoting energy metabolism; through increasing insulin sensitivity, adiponectin promotes oxidation of adipose tissue and decreases levels of fatty acids and three triacylglycerol [13,14]. At present, leptin/adiponectin is considered to be one of the most sensitive indexes in the evaluation of obesity, which can not only reflect the regulation of energy metabolism in central nervous system, but also reflect the regulation of energy metabolism in peripheral circulation [15]. Serum leptin, adiponectin, leptin/adiponectin and other indexes can reflect the metabolism of glucose and lipid in the body, which is closely related to the change of BMI. In the study, the average value of leptin, adiponectin, and leptin/adiponectin levels between the two groups of children before treatment were not statistically different (P<0.05). After 6 months’ treatment, the serum leptin levels of the children in the test group were significantly higher than those in the pretherapy group and the control group, but the adiponectin levels were significantly lower than those in the pretherapy group and the control group. The ratio of leptin/adiponectin was significantly higher than that in the pretherapy group and the control group, which had a statistical difference, P<0.05. The increase of serum leptin level in children may be caused by leptin resistance, and it may be also due to the inhibition of the secretion of leptin by adipose tissue after taking sodium valproate for a long time and the stimulation of appetite in children, resulting in an increase in obesity and serum leptin. However, there are still some limitations in this research. For example, few participants were included in this research. We didn’t perform the cohort research leading to the lower evidence power of this research.

In conclusion, the treatment effect of sodium valproate for epilepsy in children is good, but is easy to lead to obesity in children.