Efficacy of Tinospora cordifolia (Willd.) extracts on blood lipid profile in streptozotocin diabetic rats. Is it beneficial to the heart?

Efficacy of Tinospora cordifolia (Willd.) stem extracts (both aqueous and alcoholic) in differ-ent dosages (200 and 400 mg/ kg b.w) on blood lipid profile in streptozotocin induced dia-betic albino rats was investigated in this study. The drug was administered orally for 10 days in 24 rats of 4 different groups treated with Tinospora cordifolia. Similarly, in another group of study consisting of 24 rats, the drug was administered orally for 30 days. Efficacy of Tinospora cordifolia in ameliorating the metabolic derangements in lipid metabolism caused by diabetes was compared with the Lante Zinc Insulin (6 Units / kg b.w. daily. i.p.) treated diabetic rats. Plasma total cholesterol, triglycerides, free fatty acids, phospholipids and lipoproteins like high density lipoprotein, low density lipoprotein and very low density lipoprotein -cholesterol levels were measured according to the standard biochemical meth-ods. Drug treated diabetic animals showed a significant (p< 0.05) effect of Tinospora cordifo-lia on all these parameters compared to untreated animals. Treatment with insulin restored all these altered parameters to near normal levels in diabetic animals. Our results indicated that Tinospora cordifolia stem extract is able to ameliorate the derangements in lipid me-tabolism caused by diabetes mellitus in streptozotocin induced diabetic rats towards normal level. Hence, this study may reveal the usefulness and beneficial value of herbal drug Tino-spora cordifolia in treating hyperlipidemia.

Diabetes mellitus (DM) is a chronic metabolic disorder affecting carbohydrate, fat, and protein metabolisms. It has a significant impact on health, quality of life, and life expectancy of patients as well as on the health care sys-tem [1].

One of the most common complications in DM is hyper-lipidemia, which is common in about 40% of diabetics [2]. Accumulation of lipids in diabetic condition is medi-ated through variety of derangements in metabolic and regulatory processes, thereby rendering the diabetics more prone to hypercholesterolemia and hyperglyceridemia. Diabetes is usually associated with micro vascular and macro vascular complications, which are the major causes of morbidity and mortality in diabetic patients [3].

Management of diabetes without any side effect is still a challenge to the medical field. Currently available drugs for diabetes have number of limitations, such as adverse effects and high rates of secondary failure. People today, are more concerned about the side effect and the cost ef-fectiveness of drugs and have began to rely more firmly upon herbs, which are comparatively less exploited for their medicinal qualities. As a complimentary or alterna-tive approach, herbal drugs with anti-hyperglycemic ac-tivities are increasingly sought after by diabetic patients and healthcare professionals. Plants like Momordica cymbalaria, Neem seed kernel powder, Averrhoa bilimbi [4] have shown to have hypoglycemic properties and were able to correct the metabolic derangements caused by ex-perimental diabetes.

Tinospora cordifolia (Willd.) Miers ex Hook. F. & Thoms. (TC) belongs to the Menispermaceae family and known as Gulancha in English, Guduchi in Sanskrit, and Giloya in Hindi. It is a large, glabrous, deciduous climb-ing succulent shrub, commonly found in hedges. It has been known for long in Ayurvedic literature as a tonic, vitalizer and as a remedy for diabetes and other metabolic disorders [5].

However, the effects of TC stem extracts on the metabolic derangements caused by streptozotocin diabetes, espe-cially on blood lipid profile and the efficacy of this effect compared to standard drug insulin have not been studied intensively so far, which forms the basis of the present study.

TC stem was collected fresh from forest areas in Udupi- district, Karnataka state, South India and dried in shade and then powdered. The plant was identified by Professor and Head, Department of Botany, Mangala Gangothri, Mangalore University. A specimen (Voucher No. 31) was deposited in the botany department museum. The pow-dered materials were kept in an air tight container in a refrigerator until the time of use.

Aqueous and alcoholic extracts of TC were prepared ac-cording to the standard extract procedure [6]. The yield of extracts was approximately 8.5 % and 7 % respectively.

Animals and time of experiment

Female albino rats of inbred Wistar strain (body wt. 180-210 g) were used in this study. Animal ethical committee clearance was obtained from Institutional Animal Ethics Committee (IACE No. 08/004/02). The animals were fed on pellet diet (Hindustan Lever Ltd. Bangalore) and water ad libitum through out the study period. All the experi-ments were carried out in between 8-10 A.M in order to avoid the circadian rhythm induced changes.

All the experimental animals were divided into 7 groups with each group consists of 6 animals as follows:

Group 1- Control: This group was used for studying the base line values of the parameters studied.

At the end of the experimental period, animals were anes-thetized and fasting blood and plasma samples were col-lected.

Statistical significance between the different groups was determined by One way Analysis of Variance (ANOVA) followed by Tukey’s multiple comparisons by fixing the P value as p< 0.05. 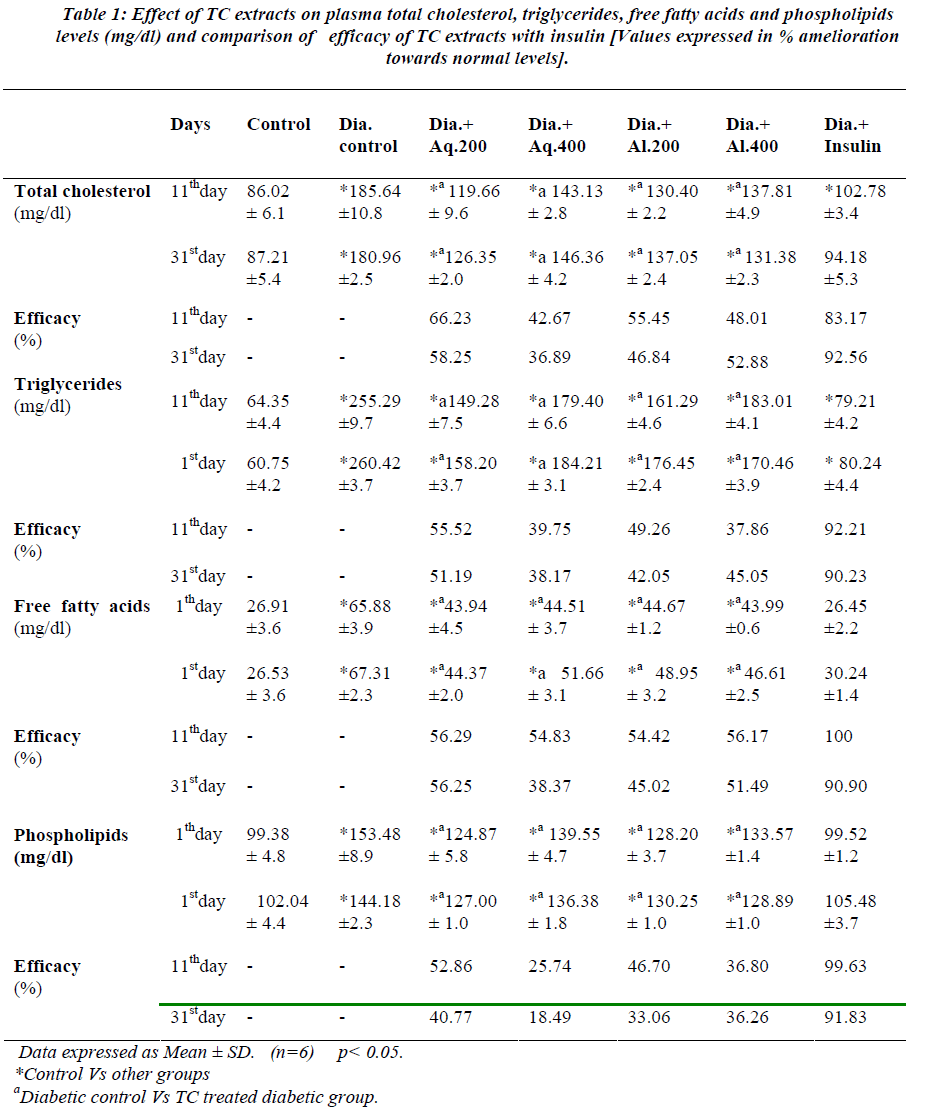 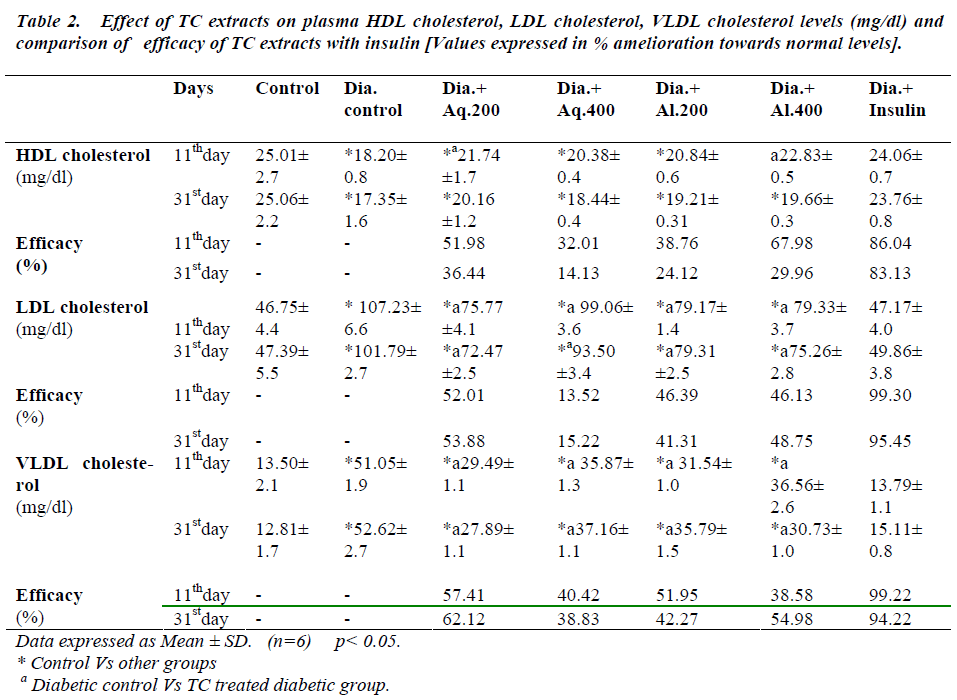 Diabetes mellitus is a metabolic disorder, showing sig-nificant impact on lipid metabolism with alterations in blood lipids and lipoproteins profile. Absence or defi-ciency of insulin alters the entire metabolism in the body including the lipid metabolism. The abnormal high levels of blood lipids in diabetes is mainly due to the increase in mobilization of free fatty acids from the peripheral depots (increased lipolysis) as hormone sensitive lipase is not inhibited in diabetes due to insulin lack. The marked hy-perlipemia, which characterizes the diabetic state, may therefore be considered as a consequence of the uninhibi-ted actions of lipolytic hormones on the fat depots [15].

In the present study, the plasma total cholesterol, triglyc-erides, free fatty acids and phospholipids in untreated diabetic rats were elevated to high levels during the study period, which is in well agreement with earlier reports [8,16]. TC treatment for 10 and 30 days in diabetic rats showed a significant reduction in all these lipids profile levels compared to untreated diabetic animals. This study also showed that the hypolipidemic effect of TC is not exclusively depending on the dosage of drug, but on the effectiveness of TC in controlling the blood glucose, since glycemic control was better with lower dosage (data not shown).

High density lipoprotein (HDL) cholesterol is produced in both liver and intestine. HDL constituents are also derived from chylomicron and VLDL catabolism [17]. HDL serves as an acceptor of lipids, especially free cholesterol from various extra hepatic cells to the liver for the ulti-mate excretion in the bile [18]. Coronary heart disease is inversely related to the levels of HDL cholesterol in the plasma [19]. Low density lipoprotein (LDL) cholesterol is the major cholesterol carrying the lipoproteins in the plasma. Most of the LDL cholesterols are derived from the catabolism of VLDL, but some are synthesized di-rectly. Very low density lipoprotein (VLDL) cholesterol is synthesized in the liver and is regulated by diet and hormones. The present study observations indicated that TC is very much beneficial in enhancing HDL cholesterol levels and lowering the LDL and VLDL cholesterol lev-els, thereby reveals its usefulness and therapeutic values. There was a correlation exists between the blood glucose levels and blood lipid profile (data not shown). When we collectively look into the blood glucose levels and lipid profiles after the TC treatment in diabetic animals, it is evident that the anti- hyperglycemic activity of TC is re-sponsible for the controlling and correcting the altered lipids profile. Thus, the glucose lowering activity of TC may be one of the reasons for correcting the altered lipid profile in diabetic animals. However, an extensive case-control study is required to document its therapeutic ap-plication in human beings. Since this study has got some limitations in using large number of sample size and study period, further study is essential in exploring the enigma behind this effect.

This study concludes that, both the aqueous and alcoholic extracts of Tinospora cordifolia could ameliorate the metabolic derangements in lipid metabolism caused by STZ induced diabetes in rats. Efficacy of this activity is appreciably good when compared to standard drug insu-lin. Use of TC seems to be beneficial to the heart, as it has got the positive effect on HDL cholesterol. Our observa-tions in this study favor the usefulness of TC as a suppor-tive drug and its therapeutic values. However, an exten-sive clinical case-control study is required to support this aspect.

The authors gratefully acknowledge Late Prof. A. Nama-sivayam, Professor of Physiology, PGIBMS, Chennai for the suggestions given by him to design this study.