Repetitive transcranial magnetic stimulation (rTMS) has been reported to improve motor function and depression in Parkinson’s disease (PD) patients [1,2]. Progressive supranuclear palsy (PSP) is gradually progressive disorder with onset at age 40 or later, vertical supranuclear gaze palsy, postural instability with falls and poor response to dopaminergic drugs. Mean survival term is reported by 6.8 years and we don’t have any effective drugs to prevent progress of neurodegeneration in PSP. The efficacy of rTMS on PSP as a neurological therapeutic device has never been estimated without one study on depression of PSP [3]. In this pre-study, we evaluated the efficacy of rTMS for original neurological scale of PSP.

Eligible participants were fulfilled diagnostic criteria for probable PSP in the National Institute of Neurological Disorders and Stroke (NINDS) and the society of PSP (SPSP), and they receive antiparkinsonian medication for more than 30 days before baseline visit [4]. Seven PSP patients (mean age 71.8 ± 3.5 years) including Richardson’s syndrome (RS) (n=6) and PSP-pure akinesia with gait freezing (PSP-PAGF) (n=1) (Table 1). The typical phenotype of PSP, RS is clinically characterized by vertical gaze palsy, postural instability with falls occurring in the first year. PSP-PAGF and is characterized by early freezing gait or speech without sustained response to levodopa, dementia and ophthalmoplegia in the first 5 years from onset [5].

7 cases received real rTMS (5 Hz, 500 pulses/day) over the supplementary motor area (SMA) for 10 days with total amount of 5000 real pulses. In our pre-study, we did not study sham controlled stimulation. Progressive Supranuclear Palsy Rating Scale (PSPRS) were used to assess clinical status before and after stimulative treatment. PSPRS (Scores range from 0 to 100) comprising 28 items in six categories: daily activities, behaviour, bulbar, ocular motor, limb motor and gait/midline [6]. For real rTMS, a figure-of-eight-shaped coil connected to a magnetic stimulator (Magstim Rapid; The Magstim Co.UK) was attached on the cranial surface over the SMA vertically to the parasagittal plane. We selected the supplementary motor area (SMA) as the stimulus site, because SMA stimulation has been reported to improve motor function in para-pyramidal tract degenerative patients [1,7]. The stimulus position of SMA is obtained to determine with navigator system. We used TMS neuro navigation system, Visor 2 (ant neuro, Netherlands), which allows us to analyze anatomical location with confidence by advanced 3D visualization. SMA is anterior to the central sulcus and medial region of Brodmann area 6. Stimulus intensity, expressed as a percentage of the maximum stimulator output, was set at 110% resting motor threshold (MT) for the right abductor of pollicis brevis muscle [8]. One TMS session consisted of 10 trains of 10 s duration with 5 Hz frequency; 5 trains were applied over each hemisphere. These stimulation methods adhered fundamentally to our previous study about rTMS for Parkinson’s disease [2].

The study protocol was approved by Shimane University Institutional Committee on Ethics (registered in the study number 231). Written informed consent was obtained from every participant before intervention. The Wilcoxon signed ranks test was used for comparison of PSPRS and 6 sub item score of PSPRS before and after stimulation for rTMS treatment. The Spearman correlation coefficient was used to evaluate the relationship between disease duration, age and the value of improvement in PSPRS.

Although we had 7 score change in clinical assessment, we could not exclude placebo effect. One supplement study with coenzyme Q10 for PSP revealed placebo group for 10 score (pre=26, post=16) and CoQ10 group for 7 score (pre=27, post=20) without any significant effect between two groups [9]. We need placebo stimulation without real rTMS in further study. The studies about PSP by transcranial magnetic stimulation (TMS) have been basically focused on brain function’s damage and diagnostic clarification from Parkinson’s disease. Wittstock reported that transcallosal inhibition evaluated by investigation of the ipsilateral silent period is severe affected in PSP-RS as compared to PSP-P and PD [10]. Central motor conduction time (CMCT) measured by TMS indicates the time for corticospinal neurons to reach the alpha-moto neurons. CMCT in PSP patients are longer than PD and it is caused by prominent cortical synapse loss with tau-positive in both motor cortices and motor thalamus [11]. The cerebellar dentate nucleus and superior cerebellar peduncle connecting with thalamus are pathologically disrupted in PSP. So the cerebellar inhibition (CBI) measured by two TMS coils over motor area and cerebellum is significantly reduced in PSP as compared to PD [12]. 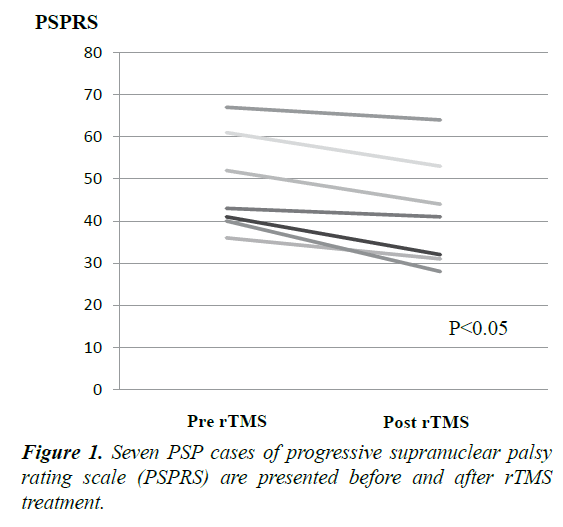 However the efficacy of rTMS on PSP as a neurological therapeutic device almost has not been estimated until now. Stimulation over SMA might be effective on extra-pyramidal sign in PSP similar to PD. The pathological lesions of PSP with dentate nucleus, superior cerebellar peduncle and mid brain tegmentum are wider than PD, so effectiveness of rTMS for PSP might be less than PD. The mean rate of progression is reported to be 8.7 points per year in PSPRS, so rTMS therapy has a potential to delay the progress of symptom for about one year [6]. PSP has not any effective drugs to inhibit progress of pathological and clinical course. This is the first report of clinical report about non-invasive brain stimulation therapy to improve neurological symptoms in atypical Parkinsonism caused by PSP. Although sham controlled stimulation is needed, our result suggests that rTMS may be a potential tool for relief PSP symptom.