Background: The single most common primary etiological factor in periodontal disease is a bacterial plaque. Periodontitis affected root surface undergo physical and chemical damage that makes them a poor base for attachment and proliferation of fibroblast. Citric acid has a bacteriostatic effect and can cause root biomodification to remove the smear layer and expose root collagen fiber. Method: Forty swabs were taken from patients having periodontitis attended Al-Furat General hospital/ Dentistry department from August to November 2018. Each swab was taken around the tooth before and after tooth extraction. These swabs were cultured on blood and MacConkey agar plates. Different types of bacteria were isolated in the area of periodontitis. In addition, different concentrations of citric acid solution (0.3, 0.4, 0.5, 0.75 and 1 g/ml) were prepared and added to bacterial growth, and then the minimum inhibition zone was determined. Results: Four types of bacteria were isolated from the patient in the area of periodontitis: Streptococcus mutans, Escherichia coli, Staphylococcus aureus and anaerobic bacteria. No bacteria were isolated in the area after tooth extraction. Concentrations of the citric acid that showed the zone of inhibition on bacterial growth were 0.4, 0.5, 0.75, and 1 g/ml. Conclusion: Streptococcus mutans appeared at a high level in patients with periodontitis. The concentration of citric acid (0.4, 0.5, 0.75, 1 g/ml) was proved to inhibit the growth of bacteria in the smear area of diseased teeth; therefore, could be suggested to be used as a root conditioning agent.

Citric acid has the ability to change the surfaces of the treated root by removing the smear layer, expose the dentinal tubules and making the tubules appear wider and with funnel-shaped orifices [1,2]. In periodontal disease, exposed cementum show accumulation of plaque and calculus on root surface with loss of collagen cross banding [3]. Citric acid partially exposes the collagen from radicular dentin that improves fibrin linkage and inhibits epithelial down growth to stimulate fibrous attachment and migration [4], it also acts as a potent antibacterial agent [2]. Periodontal diseases are a bacterial infection that destroys the gum and the bone that hold the teeth in the mouth. Periodontal disease can affect one tooth or many teeth. The mean cause of periodontal disease is a bacterial plaque. Periodontal disease is multifactorial; tobacco, hormonal change, genetic, stress, some medications, destructive habit, poor nutrition, systemic diseases, and chronic periodontitis is the condition that results in inflammation within the soft tissue surrounding the teeth causing progressive attachment and bone loss. Demineralization of dental root surface exposed to periodontal disease is widely employed in periodontology to recreate a biologically active substrate for cell reattachment and cementogenesis [5]. When citric acid demineralization was combined with growth factors on disease human root surface, increased proliferation of the fibroblast for human periodontal ligament was produced in culture [6]. The first step in the physiological mechanism of bone remodeling is demineralization by local production of acid by the osteoclasts [7]. Studies had shown citric acid can cause collagen fiber exposure which augments the connective tissue attachment to the root surface [8]. The aim of the study is to estimate the effect of citric acid on different bacterial growth caused by periodontitis.

Forty swabs were taken from patients with periodontal disease attended Al-Furat General Hospital/Dentistry Department from August to November 2018. The patients had been diagnosed by a special dentist. Twenty swabs were taken from the area around the tooth before extract, and twenty swabs after tooth extraction. These swabs were cultured on the blood and Maconkey agar plates and put in the incubator at 37℃ for 24 hours for each culture.

Ten grams of citric acid were added to 100 ml of distilled water in a sterilized conical flask. Stock solution was prepared to get the required concentrations of 0.3, 0.4, 0.5, 0.75 and 1g/ml.

Minimum inhibition concentration was determined for bacterial cultures after the addition of different concentration of the citric acid.

Data were expressed as (mean ± standard deviation) with (p <0.05) to be considered as significant. Unpaired t-test was used to camper the concentrations of citric acid and minimum inhibition zone.

A total number of forty (40) swabs were taken from the periodontal area of twenty patients with periodontitis (before and after tooth extraction) respectively. Numerous types of microorganisms were isolated from the swabs taken before extraction of teeth but there were no microorganisms detected after teeth extraction.

Streptococcus mutans growth was detected significantly in higher count compared with other species (Figure 1) followed by Escherichia coli that were detected in limited frequency, whereas Staphylococcus aureus strain was detected in a low count and finally the anaerobic bacteria present in the lowest frequency. Citric acid was evaluated as a bacteriostatic agent (in vitro) at concentrations of (0.4, 0.5, 0.75, 1 g/ml) respectively while it did not show any activity at concentration 0.3 g/ml as shown in Figure 2. 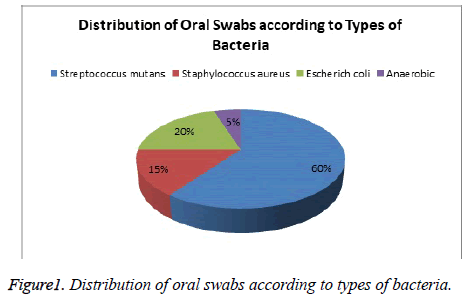 Figure 1: Distribution of oral swabs according to types of bacteria. 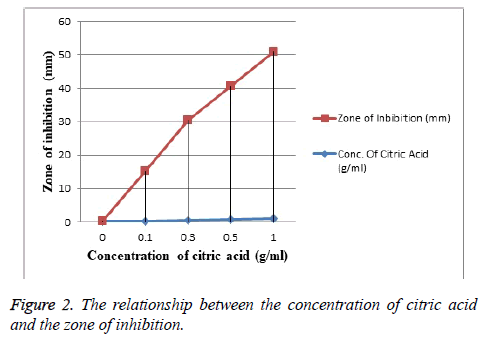 Figure 2: The relationship between the concentration of citric acid and the zone of inhibition.

Periodontal disease is the most frequent reason for teeth extraction in patients over 40 years of age [9]. Identification of the microorganisms responsible for periodontal pathology and their relation to periodontal inflammation in addition to their accurate management are some of the goals of recent dental, as well as general medical research. Streptococcus mutans is an aciduric Gram positive bacterium which may be naturally found in saliva and dental plaque. In the present study, Streptococcus mutans strain was isolated from swabs taken from the periodontal area of chronic periodontitis patients before teeth extraction. A higher presence of S. mutans (Figure 1) in patients with chronic moderate or severe periodontitis before extraction of teeth might derive from a lower oxygen tension within the periodontal pockets [10]. This is in accordance to studies by Cortelli et al. [11] and Dani et al. [12] who found a high proportion of this microorganism in subgingival plaque samples of chronic periodontitis patients.

While in contradiction to this study, the study of Koll-Klais et al. [13] who discover high proportions of these strains in healthy subjects, indicating that they could help in maintaining micro-ecological homeostasis in the oral cavity. The variation in results could be attributed to the differences in the sampling technique whether to be saliva (stimulated or unstimulated) or swabs on a subgingival plaque in addition to the diversity of oral biofilm formation. Staphylococcus aureus shows the low prevalence rate in the present study (Figure 1), this is in agreement with Colombo et al. [14] in a study who found that the proportion of S. aureus was relatively low in periodontitis. Zinsli et al. [15] reported high levels of S. aureus (>105 cells) in subgingival samples of chronic and aggressive periodontitis patients. This discrepancy might be due to different techniques used in previous studies, which did not include epithelial cell sample.

Among pathogens related to periodontitis is Escherichia coli, which detected in the current study in subgingival plaque area, accordingly the study by Amel et al. [16] had shown that E. coli was grown in both chronic and aggressive periodontitis; while Betancourth et al. [17] showed that micro-organisms of the family Enterobacteriaceae (gram-negative rods) were considered as unusual in periodontitis patients.

Findings of anaerobic culture on advanced and chronic periodontitis were detected in the lowest frequency in this study (Figure 1), which might be due to variations in species responsible for disease progression; further, additional species need to be detected using molecular methods which could be more related to periodontitis pathology [18]. The investigators stated that some of the subgingival pathogens disappear from the oral cavity after being edentulous, and do not reappear even when hard surfaces were provided such as dentures [19]. This is in agreement with our findings that the microorganisms didn’t appear after tooth extraction probably due to that the elimination of the subgingival niches by extraction of teeth could initiate a spontaneous disappearance of periopathogens; while the study of Van Assche et al. [20] contradict the hypothesis of a spontaneous eradication of all periopathogens after full extraction of teeth and there was only a significant reduction. It has been shown that citric acid promotes dentin reattachment and regeneration by its antibacterial effect and enhances initial clot stabilization. Citric acid has been shown to produce more clot stabilization on the dentin surface than other solutions [21].

Several in vitro [22] and in vivo studies [23,24] have been used in the conditioning of the root surface using different methods and materials as an alternative treatment to scaling and root planning in the regenerative process for periodontitis.

Various chemical agents have been used in root conditioning with different composition, concentration, time and mode of application of the conditioning agent in addition to the pH of the material used; among them is citric acid. [25,26].

In our study, the effect of citric acid as a bacteriostatic agent (in vitro) was detected at concentrations of (0.4, 0.5, 0.75, 1 g/ml), (Figure 2) so that the smear layer could be removed effectively by the presence of inhibition zone this is in agreement with the study of [26], this is mainly referred to the potential acidity and its dissolution and etching power on both organic and inorganic precipitates. But citric acid at a concentration of (0.3) g/ml had no effects on periodontal pathogens by the absence of the inhibition zone.

The study of [27] reported the use of chewing gum containing citric acid would reduce the periodontal pathogens in the oral cavity, through increased salivary flow and increase in the concentration of salivary human beta-defensins with potent antimicrobial activity.

Elevated Streptococcus mutans levels appear directly coassociated with untreated periodontal disease. Concentrations of citric acid of (0.4, 0.5, 0.75, 1) g/ml were proved to be effective in removing smear layer of the periodontal area for teeth with periodontitis, so it could be suggested to be used as a root conditioning agent. Attention should be given to periodontitis patients who may harbor pathogenic microorganisms in the oral cavity so as to decrease the risk of systemic infections.

The authors declare that there is no conflict of interests regarding the publication of this article.