Efficacy of caudal neostigmine for postoperative pain relief: A systemic review and meta-analysis.

Pain is the most distressful consequence of surgery with preventable complications in perioperative period [1,2]. However, expression of pain by younger children and even the method of pain assessment is more complex which makes children vulnerable to postoperative pain [3]. Studies showed that aggressive postoperative pain treatment in children with opioids and other analgesic alone were associated with many adverse effects [1,4-9].

Caudal epidural analgesia reduces the overall intraoperative anesthetic requirement and facilitates rapid return of conscious state with stable hemodynamic condition [1,4- 7,9-15]. However, perioperative pain relief with single shot caudal block is inadequate which needs further administration of other analgesic drugs intravenously [7,9,13,14]. So far, different additives like, opioids, ketamine and clonidine have been used to enhance postoperative pain relief but associated with undesirable side effects [3-7,9,12-14].

Neostigmine provide pain relief by preventing the breakdown of acetylcholine in spinal cord mediated by muscarinic and cholinergic receptors with minimal postoperative side effects [4,5,8,14,16].

Studies in this Review

Main outcomes: The primary outcomes were analgesic duration and the total analgesic consumption in 24 h.

Criteria for Selection of Clinical Trials

Two review authors independently assess the eligibility assessment with checklist and disagreement was fixed by consensus. The method of eligibility assessment by each independent author was mentioned in Table 1 and the excluded Studies were described with reasons in Table 2.The study selection process was summarized using PRISMA chart (Figure 1). 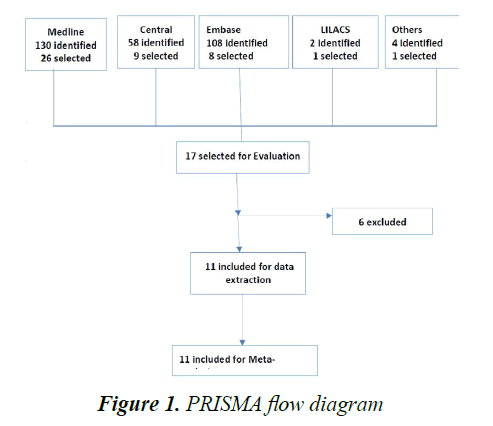 Databases were searched for randomized clinical trials comparing neostigmine and bupivacaine without date and language restriction as shown below with medical subject heading (MeSH) terms of children, postoperative, pain, nausea and vomiting, caudal block were searched as follows:

Procedures of the Review

The principal author chose randomized clinical studies with full articles and no multiple publications. The two authors, SM and YA, check each study for eligibility as mentioned in methodology and the rest were excluded with reasons. The profile of included studies was assessed carefully with standard parameters as described in Table 3.

Table 3. Risk of base table of included studies

Statistical combination of data from two or more separate trials in a meta-analysis was decided based on the evaluation of the clinical and methodological heterogeneity. The inconsistency throughout trials was quantified with the I2 statistic, assuming a value more than 50% as a substantial heterogeneity.

The summary effect measure were risk ratio (RR) and odd ratio for dichotomous variables and mean Difference and standard deviation for continuous variables along with their corresponding 95% confidence intervals (CI). The meta-analysis was planned to be performed through a random-effects model and Mantel-Haenszel (M-H) statistical method, anticipating that trials would have different techniques and assuming that the actual true effects have a normal distribution.

The data Analysis was conducted using Review Manager (RevMan5.3, Cochrane Collaboration) and Comprehensive Meta-Analysis (CMA).This systematic review was carried out using the methods established by the Cochrane Handbook for Systematic Reviews of Interventions and we followed the recommendations and checklist items from the PRISMA Statement for Reporting Systematic Reviews and Meta-analysis.

Three hundred and two trials were identified by searching strategy as shown in Figure 1. Seventeen studies were selected for evaluation with successive screening for eligibility. Finally, 11 studies with 838 participants were included for analysis and the rest were excluded with reasons (Table 2).

Eleven randomized clinical trials were published between 2002-2016. The age of included studies ranged from 1-15 years. Sample size varied from 40-134. General Anesthesia was given with nitrous oxide, oxygen and halothane in three studies [3,12,14]. In One study, general anesthesia was given with halothane with sleeping dose of thiopentone with laryngeal mask airway. Two studies combine fentanyl with propofol and halothane as induction agent [7,17]. The use of thiopental and succinylcholine for induction of anesthesia and intubation of the trachea was described in two studies. Two studies did not describe the method of induction [8,9]. Withdrawal of cases from the study were reported in two studies (Table 1) [14,17].

Sedation: Sedation was assessed with objective score based on eye opening in seven studies [3,5-7,9,12,17]. Six studies did not show any significant difference between the groups on sedation score [3,5,6,9,12,17]. Only one study found significant sedation score in patients received neostigmine [7]. Four studies didn’t study sedation as an outcome [4,8,10,14,18].

Neostigmine co-administered with bupivacaine and bupivacaine alone were compared as intervention and controlled respectively with postoperative analgesic profile as primary outcomes in children having caudal epidural block for lower extremity surgery. 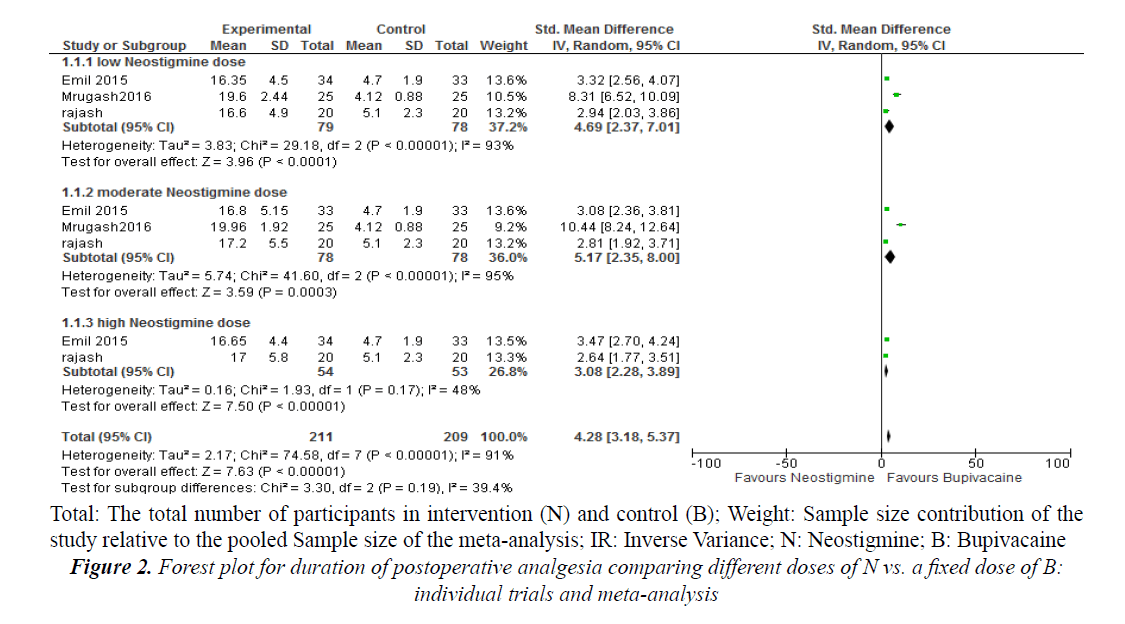 Figure 2. Forest plot for duration of postoperative analgesia comparing different doses of N vs. a fixed dose of B: individual trials and meta-analysis. 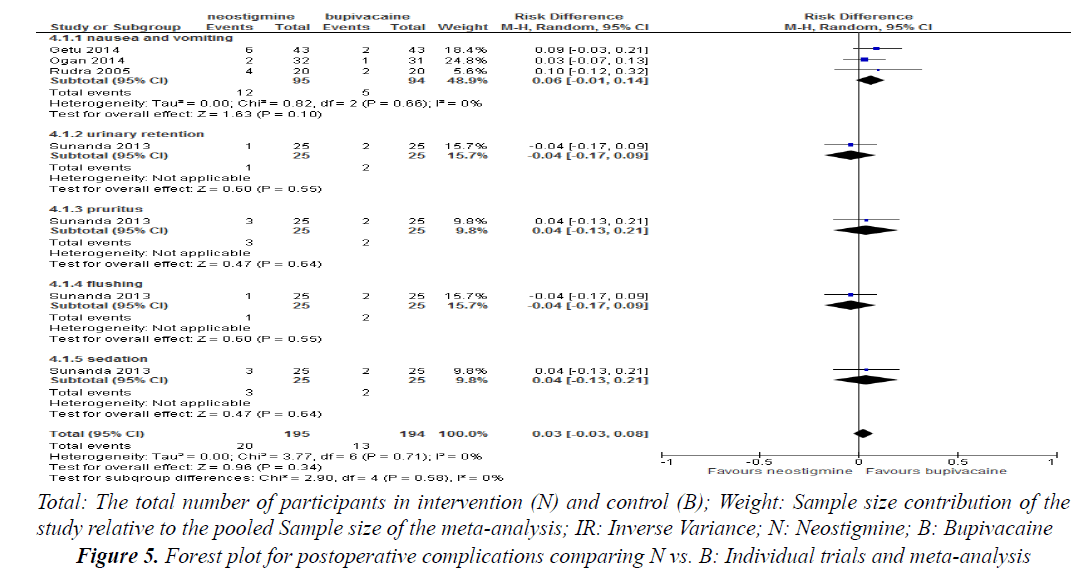 One study reported on postoperative analgesic consumption in 24 h and noted that there was significant association when neostigmine group was compared with bupivacaine alone (SMD=-1.57, 95% confidence interval (CI) -2.14, 1.01, one trial, 63 participants (Figure 4).

Post-operative nausea and vomiting was reported in three studies and there was no significant risk difference when neostigmine is compared with neostigmine alone (RD=0.06, 95% confidence interval (CI) -0.01, 0.14, 3 trials, 189 participants) (Figure 5).

Urinary retention, pruritus, sedation and flushing were reported in one study and did not show any significant risk difference when neostigmine was compared with bupivacaine alone (p>0.05) (Figure 5).

This systemic review and meta-analysis tried to identify the benefit of caudal neostigmine administered with bupivacaine for postoperative pain relief in children undergoing lower extremity surgery.

Mortality was not reported in any of the included trials and this may reveal the relative safety of caudal epidural neostigmine with bupivacaine for perioperative pain management.

The review has shown that postoperative analgesic duration is better in patients receiving neostigmine along with bupivacaine compared to bupivacaine alone which is consistent with the majority of included randomized trials. However, two individual randomized trials did not show any significant difference on postoperative analgesic duration and this discrepancy might be due to small sample size or data collection bias.

Postoperative nausea and vomiting was higher in neostigmine co-administered with bupivacaine as compared to bupivacaine alone in individual trials. Nevertheless, the systemic review did not show any significant difference. This might be small sample size and low power which needs further review with large sample size.

The review also showed that requirement of rescue analgesia was less in children receiving caudal neostigmine co-administered with bupivacaine as compared to bupivacaine alone.

Sedation and pruritus were seen more often in cases received neostigmine co-administered with Bupivacaine as compared to bupivacaine alone, but the risk difference was not significant.

Ethical approval and consent to participate the research has been approved by Dilla University institutional Board Review.

Availability of Data and Material

The Authors wish not share the data as per research and dissemination office.

Semagn Mekonnen perceived and designed the study. Data extraction, analysis, interpretation of data and drafting the manuscript was accomplished by the two authors.

This work was done by authors own resources.