The aim of this study is to demonstrate that percutaneous injections of autologous Adipose Tissue- Derived Stem Cells (ASCs) and Extracellular Matrix (ECM) in the form of adipose Stromal Vascular Fraction (SVF), along with Hyaluronic Acid (HA) and Platelet-Rich Plasma (PRP) activated by calcium chloride could regenerate cartilage-like tissue in human hip Osteoarthritis (OA) patient. Autologous lipoaspirates were obtained from adipose tissue of the abdominal origin. Afterwards, the lipoaspirates were homogenized to obtain ECM. This homogenized lipoaspirates were then mixed with collagenase and incubated. The ASCs/ECM-containing SVF was mixed with calcium chloride-activated PRP plasma and HA, and this ASCs mixture was injected into a hip of a patient with OA. Pre-treatment and posttreatment MRI T2 views, functional rating index, range of motion, and pain score data were analysed. The patient’s Magnetic Resonance Imaging (MRI) data showed significant positive changes. Cartilagelike tissue regeneration was evident in MRI studies of the patient. Along with MRI evidence, the measured physical therapy outcomes in terms of range of motion, subjective pain, and functional status, all improved. These results indicate that percutaneous injection of the ASCs mixture is a promising minimally invasive therapy for OA of human hip.

Adipose Tissue-Derived Stem Cells (ASCs) in the form of Stromal Vascular Fraction (SVF) have been widely used in Korea over decades by plastic surgeons as a semi-permanent volume expander. In June 2009, Korean Food and Drug Administration (KFDA) had allowed adipose SVF to be used as a medical procedure when obtained and processed within a same medical facility with minimal processing [1]. Adipose SVFs contain various components, including Mesenchymal Stem Cells (MSCs) and Extracellular Matrix (ECM) [2]. Such MSCs are termed Adipose Tissue-Derived Stem Cells (ASCs) and have shown to regenerate cartilage in vitro [3,4]. In 2011, Pak has showed that ASCs contained in the adipose SVF can regenerate cartilage-like tissue in human Osteoarthritis (OA) patients [5]. Since then, many studies have confirmed that autologous ASCs in human adipose SVF are potential agents capable of regenerating cartilage in OA patients [6]. Due to lack of standardization in autologous adipose tissue processing procedures and large variations in the numbers of ASCs within the adipose tissue, the resultant cartilage regeneration capacity may vary widely [7]. Among the many reasons, some of the factors that may affect the result of cartilage regeneration by ASCs can be due to ASC viability, adherence, and growth.

It is well recognized that ECM may work as a scaffold and enhance stem cell adherence at the site of the cartilage lesion [8]. Also, ECM has been shown to excrete various growth factors which may also enhance the survival and growth of stem cells following direct local injections [8].

In this report, Platelet-Rich Plasma (PRP) was used as a source of growth factors and as a differentiating agent for the ASCs that were administered locally. PRP contains various growth factors including transforming growth factor-beta (TGF-beta). These growth factors in PRP have been shown to have positive effects on growth and differentiation of various cells including chondrocyte formation [9-11]. Hyaluronic Acid (HA) and ECM were used as scaffolding materials [8,12]. Furthermore, we present a Magnetic Resonance Imaging (MRI) evidence of cartilage-like tissue regeneration in human hip OA patient using the ASCs mixture (ASCs and ECM in the form of adipose SVF along with HA and PRP activated by calcium chloride).

The new rules and regulation by the KFDA has made it possible to use adipose tissue as a source of ASCs in Korea [1]. Informed patient consent was obtained prior to the surgical procedures. The approval and consent to report single cases were waived by the Myongji University Institutional Review Board committee (HSC) for case report. Further, this clinical study was in compliance with the Declaration of Helsinki and regulation guidelines of the KFDA.

Patient was restricted from taking steroids, aspirin, Non- Steroidal Anti-Inflammatory Drugs (NSAIDs), and Asian herbal medications for one week prior to the procedure.

In the operating room, approximately 50 ml of packed adipose tissue were obtained by liposuction of the subcutaneous layer of the lower abdominal area using manual techniques [5]. The adipose tissue was treated with collagenase (0.07% type 1, at 37°C for 40 min; Adilase, Worthington, Lakewood, NJ, USA) and the Stromal Vascular Fraction (SVF) containing ASCs was separated from the lipoaspirates by a fat stem cell isolator (CPLTM, Medicamatch, Ansan, Korea).

In order to homogenize the lipoaspirates for even penetration of collagenase and also to obtain additional ECM, the packed adipose tissue was transferred back to two 60 ml Luer-Lock syringes connected to a manual homogenizer/ECM extractor (CPLTM, Medicamatch, Ansan, Korea), and were cut 20 times to mince the lipoaspirates.

ASCs were extracted through the use of digestive enzymes (0.07% type 1 collagenase; Adilase, Worthington, Lakewood, NJ, USA) and centrifugation (300 g for 5 min) to separate and remove collagenase [3-5]. The total volume of the solution containing ASCs and ECM was 8.5 ml from 50 ml of packed adipose tissue. While preparing the ASCs and ECM, 30 ml autologous blood were drawn along with 2.5 ml anticoagulant citrate dextrose solution (0.8% citric acid, 0.22% sodium citrate, and 0.223% dextrose; Baxter Healthcare Corp., Marion, NC, USA). After centrifugation (300 g at room temperature for 15 min, then 1200 g at room temperature for 5 min using supernatant), 4.4 ml of Platelet-Rich Plasma (PRP) along with the Buffy coat were obtained and 3% (w/v) calcium chloride (0.1 ml; Choongwae Pharmaceutical Co., Gyeonggido, Korea) was added to the mixture to activate PRP. 0.5% (w/v) hyaluronic acid (2 ml; Huons, Chungbuk, Korea) was added as a scaffold to this mixture. The ASCs mixture comprised of separated ASCs and ECM, together with activated PRP and Hyaluronic Acid (HA).

After the hip was cleaned with 5% povidone-iodine (Choongwae Pharmaceutical Co., Seoul, Korea) and draped in a sterile fashion, the injection site was anesthetized with 0.25% ropivacaine (Huons, Chungbuk, Korea) superficially outside of joint capsule and diluted 0.125% lidocaine (Daehan Pharmaceutical Co., Gyeonggido, Korea) was used to anesthetize inside the joint capsule. On the same day of liposuction, the ASCs mixture (14 ml) was injected into the hip joint via anterior approach using a 90 mm, 18 gauge spinal needle under an ultrasound guidance. The patient was, then, instructed to remain still for 60 minutes to allow settlement of the ASCs mixture at the site of lesion [5,6]. Upon discharge from the clinic, the patient was instructed to exercise minimal activities for one week. The patient returned for three additional injections of PRP activated by calcium chloride at weekly intervals for three weeks.

The patient is a 50-year-old Korean female with bilateral hip osteoarthritis. The patient had the chronic bilateral hip pain over 7 years that gradually increased. The patient was apparently better with use of chronic NSAID and occasional injections of steroids and HA. However, approximately one year prior to the office visit, the patient’s symptoms deteriorated. The patient underwent arthroscopic debridement/ lavage but was not completely relieved of pain. The patient noticed worsening of the pain after the procedure and was offered THR surgery by the orthopaedic surgeon. However, the patient was reluctant to go through THR surgery due to potential side effects. At the time of initial evaluation, the patient reported severe pain (VAS score: 9; Figure 1A and could not walk well without an assistant device. ROM (Figure 1B) was decreased. A pre-treatment MRI demonstrated joint space narrowing, irregular cortical margin with diffuse bone marrow oedema (Figures 2A, 2C, 2E, and 2G). 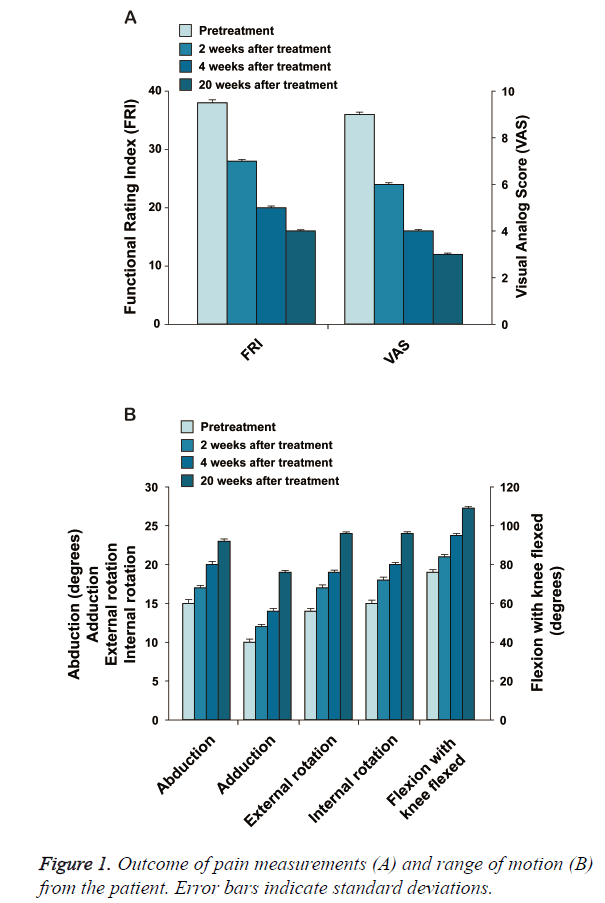 Figure 1: Outcome of pain measurements (A) and range of motion (B) from the patient. Error bars indicate standard deviations. 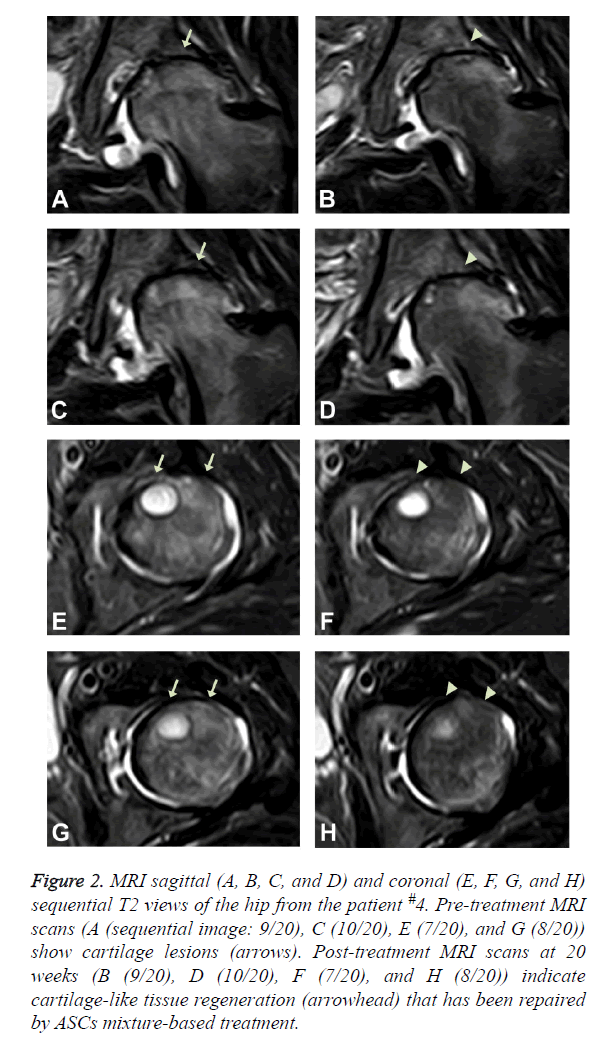 This clinical case report provides clear MRI evidence of cartilage-like tissue regeneration in OA of human hip by using the ASCs mixture. Based on MRI features, the newly formed tissue resembled that of cartilage; however, the true nature of the newly formed tissue cannot be confirmed without a biopsy. While cartilage regeneration in human knees using ASCs in the form of SVF have been shown in numerous human patients, this case report is the very first study suggesting possibly a better improvement in current strategy of cartilage regeneration by employing the ASCs mixture in human hip. In addition to the MRI evidence, the patient’s symptoms and signs improved as early as two weeks than previously reported by Pak [5]. The patient reported symptom improvement by the second week of the treatment. The patient's reported improvement in symptoms may probably be due to the presence of ECM and its factors in addition to ASCs.

ECM has been shown to work as a scaffold and shown to excrete various growth factors [8]. Thus, ECM can potentially improve the symptoms earlier by enhancing the cell adherence to the lesion. After the adherence, it is possible that the various growth factors released by the ECM can stimulate the adhered cells and surrounding tissue to grow. Therefore, the patient noticed the early clinical improvements. As shown previously, the patient did not report 100% resolution of their symptoms. This may be due to the fact that OA is a disease of the whole joint and not just cartilage. Thus, with improved cartilage regeneration, the patient may need to strengthen the related tendons, ligaments, and muscles to further improve already improved joint conditions.

Although further studies are needed to verify this procedure presented in this report, this is the very first case report attempting to improve the current strategy of cartilage regeneration in human hip with percutaneous injection of the ASCs mixture. Currently, no non-surgical curative therapy is available for the treatment of osteoarthritis. Percutaneous injection of stem cell therapy with the ASCs mixture may therefore provide an alternative to current treatment strategy for the treatment of hip osteoarthritis.

In the present case, percutaneous injections of autologous ASCs mixture to hip OA provided significant relief from earlier symptoms. All clinical criteria of FRI, VAS score, and ROM improved on the patient, along with significant MRI changes. Although no biopsy of the regenerated tissue was performed, the tissue can be estimated to be cartilage-like in nature by comparing with the surrounding cartilage and other tissues. Although further studies are necessary to verify this new procedure, percutaneous injections of autologous ASCs mixture present a promising, minimally invasive option of treating OA of human hip by regenerating cartilage-like tissue.

The author acknowledges the support from the staff of Stems Medical Clinic. This work was supported by research grants from the National Research Foundation of Korea (NRF) funded by the Ministry of Science, ICT and Future Planning (No. 2011-0027928 and No. 2016R1C1B2010308) and Marine Biotechnology Program (20150581, Development of Technology for Biohydrogen Production using Hyperthermophilic Archaea) Funded by Ministry of Oceans and Fisheries in Republic of Korea.