Effects of workplace noise on blood pressure and heart rate

The term noise is commonly used to describe sounds that are disagreeable or unpleasant produced by acoustic waves of random intensities and frequencies [1]. Some authors define noise as any audible acoustic energy that adversely affects the physiological or psychological well being of the people [2]. Noise pollution is becoming increasingly more severe in industrial countries and the cost of alleviating it in future years is expected to be insurmountable.

Prevalence of noise is implicated in various illness of human and it is responsible for increased morbidity associated with modern life style. Immediate and serious attention must be given to control this mushrooming problem, since the overall loudness of environmental noise is doubling every ten years [3]. This has encouraged scientists to discuss and study the effects of noise pollution on human’s health. The Federal Occupational safety and Health Act (OSHA) administrated by the U.S. Department of Labour, requires that specified noise exposures not be exceeded. Excessive noise pollution has been blamed not only for hearing damage and community annoyance but also for hypertension, fatigue, heart trouble, disturbed serum lipid, triglycerides, platelet count, plasma viscosity, glucose and reduced motor efficiency [4]. Many studies have shown that noise influences the cardiovascular, endocrine, metabolic, gastrointestinal and neurological systems [5]. The cardiovascular system is considered to be the most involved and therefore has received the most attention, where as few specific studies have been performed concerning the relationship between noise and myocardial disease. There is evidence that noise presents a significant factor in the genesis of arterial hypertension coronary disease [7], and disorders of peripheral arterial circulation [8].

Evidence that links noise exposure to chronic changes in blood pressure and heart rate can be found in both animal and human studies [9]. Some noise experts have investigated the acute affects of short term loud noise on blood pressure and other cardiovascular parameters. Most of the studies have shown a rise in systolic and/or diastolic blood pressure [10,11], while some of the research scientists observed negative (decreased or non-significantly increased) association between blood pressure and noise

As no work has been done on the effects of noise on the cardiovascular system of workers of lock factories, therefore, we designed this study to evaluate the influence of noise exposure on blood pressure and heart rate of people working in lock factories of Aligarh. There is evidence that by the use of appropriate preventive measures, the harmful effects of noise could be moderated and even eliminated [6].

Criteria for selection of the subjects in this study were:

1. Subjects were working in different sections of lock factories.

2. Subjects having no history of hypertension.

3. Subjects having no history of myocardial infarction.

4. Subjects having no history of head injury with unconsciousness.

The control group consisted of 30 subjects taken from the out door patient Department of Otorhinolaryngology, students and staff of Physiology Department of Jawaharlal Nehru Medical College, A.M.U., Aligarh and from the general population of Aligarh who were not exposed to any noisy environment. All the control cases were within the age group of 16-55 years with mean age 33.40 ± 10.41 years. Their mean height was 159.97 ± 6.15 cms and their mean weight was 57.87 ± 8.91 kg. Among controls 24 were males and 6 were females.

The test group included 114 workers of both sexes employed in different lock factories of Aligarh, exposed to industrial noise. The age of the subjects was in the range of 16-58 years with mean age 35.74 ± 9.14 years. Their mean height was 162.16 ± 6.09 cms and their mean weight was 54.78 ± 8.68 kg. Among test cases 101 were males and 13 were females. The subjects were thoroughly examined and investigated. So the controls cases and test cases were matched according to the age, height and weight.

The heart rate was recorded as per standard procedure of medical examination given in Hutchison’s Clinical Methods [14]. The subjects were allowed to relax so that any tachycardia due to nervousness in the subjects was subsided. The forearm of the subject was slightly pronated and the wrist slightly flexed. The radial pulse was felt with the tips of the fingers compressing the vessel against the head of the radius. The rate of the pulse was noted in beats per minute. The beats were counted for full one minute. 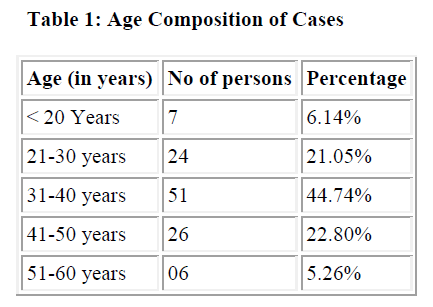 Table 2: Distribution of Subjects in Different Units of Lock Factories

The measurement of noise pollution level and its nature at different locations represented by different sections of lock factories are given in Table 3. The maximum level of noise was in Power Press unit, subsequently followed by Lathe Machine, Grinder and Hand Press unit. When the blood pressure was analysed in the subjects, the statistical analysis of the data showed that the systolic blood pressure (SBP), diastolic blood pressure (DBP), Pulse pressure (PP), and mean pressure (MP) increased in 63.15%, 57.02%, 48.24% and 40.35% of total subjects respectively and the above parameters decreased in 2.63%, 0%, 19.29% and 38.59% subjects respectively. No effect on SBP, DBP, PP and MP was observed in 34.21%, 42.98%, 32.45% and 21.05% subjects respectively. The heart rate was increased in 17.54% of all subjects. The numbers of subjects in whom the blood pressure increased, decreased or was not affected is shown in Table 4.

Table 3: Noise Level in the Different Units of Lock Factories. 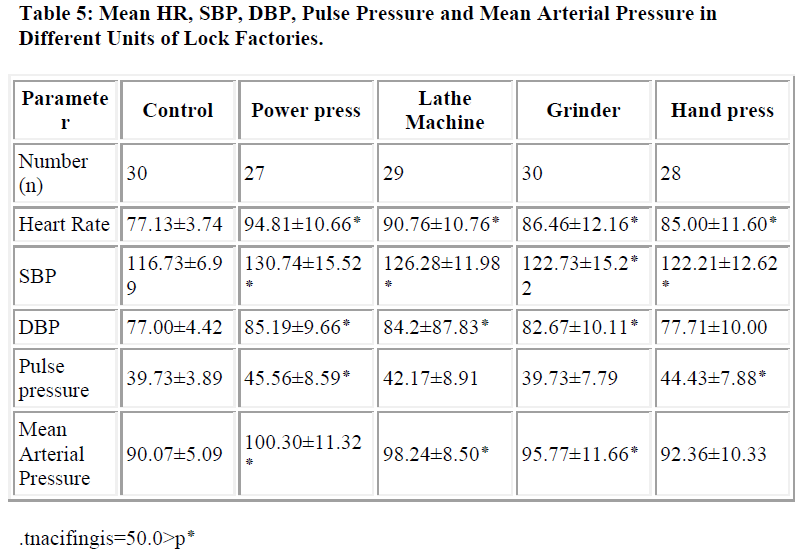 Table No. 5 shows the average values expressed as group mean ± standard deviation (SD) of various parameters like heart rate, SBP, DBP, PP and mean arterial pressure in various sections of lock factories. The data were analysed using the SPSS program. Analysis of significance by student t test was used to compare the different parameters of the workers in Power Press, Lathe Machine, Grinder, Hand Press units with the control subjects.

Some of the scientists observed a rise only in systolic B.P. [18,10] while many others found a significant increase in both systolic and diastolic B.P. in response to noise. Babisch [19] could not see any association of noise and blood pressure, whereas Elise, Kempen V, Kruize H, Hendrick C, Boshuizen, Caroline B et al [20] observed insignificant increase in blood pressure.

The actual mechanism for increase in blood pressure is not yet completely understood but it may be due to the following mechanism: The catecholamines released from adrenal medulla as a result of activation of adrenergic system, the effect of suprarenal glands steroids, angiotensin and also the direct effect of noise on arterial wall tension influences the blood pressure and heart rate [21]. Stimulation by noise, through sympathetic nervous system, causes an elevation of blood pressure by an increase in total peripheral resistance and myocardial contractility The repeated stimulation with noise could then accelerate the development of structural vascular changes in the peripheral resistance vessels and by this mechanism create a permanent blood pressure elevation to hypertensive levels [11].

These results show that industrial noise cause disturbance of cardiovascular system of the exposed workers so effective actions should be taken to prevent or minimize the effects of noise at workplaces. Efforts should be made to control the noise at the source, to control the transmission of noise and to protect the exposed persons. There should be permanent arrangements for regular measurements of noise levels at different locations in cities and factories and health education regarding noise control should be given due importance.