Objective: To observe influences of the traditional Chinese auricular point therapy combined with relaxation training on patients with primary hypertension and anxiety.

Method: Conduct random allocation on 86 inpatients with primary hypertension and anxiety according to Pocock and Simon's minimization method; 43 patients in the observation group were treated with routine nursing, ear acupoint application therapy combined with regular relaxation training (2 times/d, 30 min/time, 2 weeks of continuous training); 43 patients in the control group were only treated with routine nursing. The SAS was adopted during admission and after 2 weeks of intervention to conduct effect evaluation and record blood pressure changes.

Results: The antihypertensive efficiency in the observation group was obviously higher than that of the control group. The difference had statistical significance (p<0.05). The blood pressure, total SAS score, psychogenic and somatic anxiety scores got improved obviously after intervention. The difference had statistical significance (P<0.01). Insomnia and mood of anxiety in somatic anxiety factors were improved obviously (P<0.05); the cardiovascular, respiratory and sensory systems in psychogenic factors were improved obviously (P<0.05).

Hypertension is a kind of psychosomatic disease. Some report indicated that 37.5% people in China were diagnosed as primary hypertension and anxiety [1]. The research showed that the traditional Chinese auricular point therapy, as a good adjuvant therapeutic method, was characterized by fast and obvious effectiveness, less adverse effects, cheap price, good compliance and depressurization function [2-4]. At present, there are few researches on regular depressurization combined with auricular point therapy in treating patients with primary hypertension and anxiety in China [5]. This method was adopted in this paper with good effects.

86 inpatients with confirmed primary hypertension and anxiety were selected from the department of cardiology in our hospital from April, 2014 to August, 2016. Inclusion criteria: 1. the diagnosis of hypertension conforms to standards of Guidelines for Prevention and Control of Hypertension in China in 2005; that is, systolic blood pressure ≥ 140 mmHg (1 mmHg=0.133 kPa) and/or diastolic blood pressure ≥ 90 mmHg; 2. Total evaluation score of HAMA >14; 3. Patients have independent behavior capacity; 4. Informed consent. Inclusion criteria: 1. Patients with secondary hypertension; 2. Patients with serious hepatic or renal insufficiency or unstable vital signs; 3. Patients who cannot complete the survey due to mental or physical disability; 4. Patients who are allergic to tapes. Patients were divided into the observation group and the control group according to Pocock and Simon’s minimization and randomization method. The observation group was composed by 43 patients including 23 males and 20 females with age of 53.6 ± 8.3 and course of disease of 8.5 ± 0.6, of which there were 43 married patients and no single patients; 37 patients had health insurance and 6 patients paid medical fees by themselves; hypertension grade: 8 patients: grade 1; 7 patients: grade 2; 28 patients: grade 3; hypertension risk stratification: 5 patients: I; 5 patients: II; 24 patients: III; 9 patients: IV; education level: 4 patients: illiteracy; 22 patients: under university degree; 10 patients: above university level; occupation: 9 farmers; 23 workers; 7 businessmen; 4 cadres. The difference in gender, age, course of disease, marital status, hypertension grades and risk stratification, education levels and occupations etc. had no statistical significance (P>0.05) but with comparability [6,7].

Patients in the observation group were treated with the ear acupoint application therapy except for conventional antihypertensive therapy and routine nursing (including health education and mental nursing) of those in the department of cardiology. Acupoint selection: Shenmen, heart point, liver point, Sanjiao and kidney point [10,11]. Routine disinfection on auricles: GY-I-type auricular point detector was used to seek for sensitive spots. Then 0.5 cm° × 0.5 cm tapes with cowherb seeds were applied on selected auricular points. The operator shall press the front and back of auricles via the thumb and forefingers from light to heavy until patients felt sore, numb and aching or main and collateral channels’ radiation conduction remains “arrival of Qi”. Press each acupoint for about 20 s every time, 3~4 times/d; change to another ear per 3 days. Patients in the control group were only treated with conventional antihypertensive therapy and routine nursing. The intervention time: 14~28 d [12,13].

The evaluation was conducted one time within 24 h after entering the group and at the day of discharge by two designated researchers who received related training before, of whom one was responsible for inquiry and the other was responsible for observation. They will complete rating independently. The researchers explained contents to patients elaborately due to their different education levels. The scale will be kept by archives in the hospital after checking.

The SPSS 20.0 was adopted to conduct statistical analysis. The total HAMA score and factor score were represented by ͞x ± s. The grouping T rest and paired T test were used at the time of measuring data after normal distribution and homogeneity test of variance. The χ2 test was used for enumerating data. P<0.05 indicated that differences had statistical significance.

Comparison of efficacy of therapies in two groups 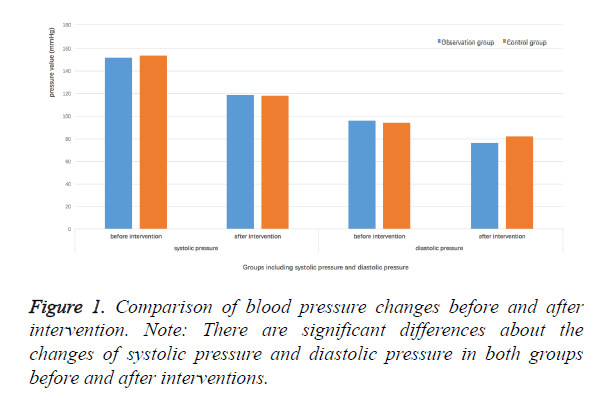 HAMA scores of two groups before and after treatment 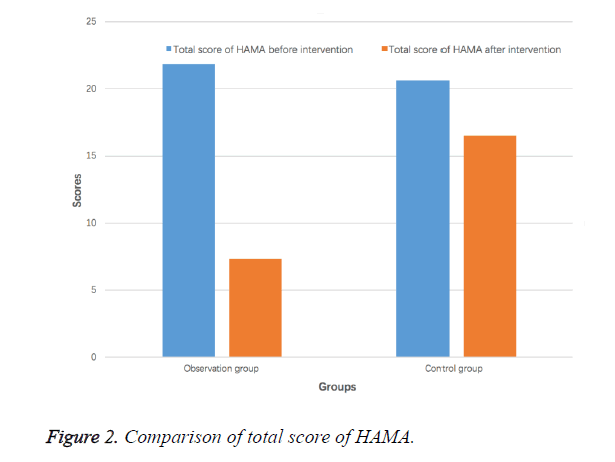 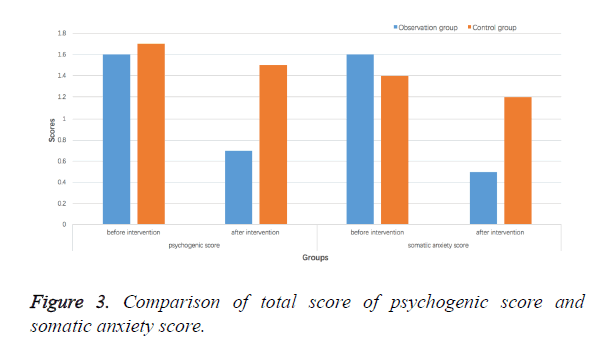 Theoretical basis for traditional Chinese auricular point therapy; the auricular point therapy is the treasure of traditional Chinese medicine, whose theoretical basis include three aspects as follows: 1. Traditional Chinese medicine held ears are closely related to main and collateral channels as well as viscera. The disorder of organs and meridians is reflected on ears. The function activities of various organs can be adjusted by stimulating auricular points that are corresponding to organs and meridians [16]. 2. The auricular needles were emerging in Europe in 1950s. The French Doctor Nogier put forward an inversed auricular point diagram, which looked like an embryon. The internal organs as well as four limbs have their corresponding points and areas on auricles, which can be stimulated to activate vagus nerves, adjust functions of cardiovascular, respiratory, digestive, nervous and urinary systems etc. so as to cure diseases [17]. 3. The ear acupoint application therapy has certain psychological implications [18].

The traditional Chinese auricular point therapy can lower blood pressure and treat anxiety effectively. The hypertension is diagnosed as “headache” and “dizziness” etc. The pathogenesis is closely related to liver and kidney. The emotional depression will lead to liver disorder, while emotional arousal will cause liver-yang hyperactivity; or improper hygienism will cause kidney essence deficiency. The liver point can be used for soothing, clearing fire, calming endogenous wind and reducing excess together with Sanjiao; the kidney point can be used to nourish kidney-yin and liver. With three points together, it can reinforce deficiency and reduce excess by simultaneous treatment of principal and subordinate symptoms. Then the viscera become balanced and dizziness stops. The anxiety belongs to “depression syndrome” in the traditional Chinese medicine, which is mainly caused by heart-spleen deficiency, heart-kidney imbalance and liver depression of the fire due to tumultuous endeavour and negative thoughts. The heart controls mental activities. The heart point can tranquilize mind by nourishing the heart; the Shenmen point can clam nerves; the liver point can clear fire; the kidney point can nourish the liver and kidney; the Sanjiao point can regulate Qi flow; various points can be combined to eliminate evil, clam nerves and keep balance between Ying and Yang. The modern researches indicated that the hear point can strengthen the heart, regulate blood pressure and sooth the nerves etc. The liver point can disperse stagnated liver Qi for promoting bile flow, which can be used to treat angiopathy and regulate blood pressure etc. The kidney point can strengthen body and regulate vegetative nerve functional disturbance; the Shenmen has the functions of sedation, relieving dizziness, decreasing blood pressure and soothing nerves; the Sanjia is a reaction point of liver-qi invasion, whose response intensity is only second to the liver point. Various points can be combined to treat patients with primary hypertension and anxiety [19].

Besides, the traditional Chinese auricular point therapy can not only treat anxiety and decrease blood pressure, which is especially applicable for patients with hypertension and anxiety as a rather good adjuvant therapy. However, though it has many advantages, its shortcomings should not be neglected. 1. It could not cure disease. Therefore, patients must receive regular treatment in the hospital regardless of its obvious effects against anxiety and hypertension as well as other advantages. 2. Its adverse effects cannot be neglected. For example, the Shenmen point calm and soothe the nerves, which can be used for insomnia and anxiety etc., but if with strong sedation, patients will have adverse effects such as drowsiness and slow intestine peristalsis etc. The sympathy point can adjust autonomic nervous functions and decrease blood pressure, while the clinical experience indicated that this point has diastolic functions etc.