Erythropoietin (EPO) is a 34-kilodalton glycoprotein hormone and a potent regulator of erythropoiesis, that is secreted primarily from the endothelium and interstitial fibroblasts of renal tubules, and to a lesser extent from the liver in the rat [1-3]. Chronic renal failure (CRF) is as-sociated with anemia, which is accompanied by relatively decreased EPO secretions from the kidney. The anemia of CRF accompanied by diabetic nephropathy is more severe than that of glomerulonephritis [4].

Insulin-like growth factor I (IGF-I) plays an important role in erythrocyte production (5), stimulating proliferation of erythroid precursor cells in vitro [6-11]. IGF-I is required for and essential to erythroid development [12,13].

Recently, some investigations have suggested that both IGF-I and EPO play an important role in erythropoiesis in vitro [9,12,14]. The addition of IGF-I with EPO leads to enhanced heme synthesis and moderate cellular prolifera-tion in the late erythroblasts in vitro [9]. Brox et al. have suggested that anemia of CRF may present both EPO-deficient and functional IGF-I-deficient states, and that subtherapeutic doses of EPO and IGF-I cause a significant increase in hemoglobin (Hb) levels in the mouse [14]. In a human study, plasma IGF-I levels were found to be increased in patients with dialysis and kidney trans-plantation treated with recombinant human EPO (rHuEPO) therapy compared without rHuEPO therapy [15]. However, no studies have examined the effects of rHuEPO therapy on plasma IGF-I levels and Hb concen-trations in predialysis diabetic patients with CRF and anemia.

In the present study, we investigated the effects of rHuEPO treatment on plasma IGF-I levels and Hb con-centrations in diabetic patients with nephropathy and anemia of CRF.

Seven patients with type 2 diabetes mellitus accompanied by advanced nephropathy (renal failure stage) were stud-ied. The mean (±SE) age was 62.6±6.2 yrs (4 males and 3 females). BMI was 22.5±1.9 kg/m2. HbA1c levels were 6.7±0.2%. Serum creatinine and creatinine clearance levels were 327.1±44.2 μmol/L and 0.261±0.022 ml/s, respectively. Serum albumin levels were 32±5 g/L. Hb concentrations were 78±3 g/L. Urine albumin excretions for 24 hours were 2,613±578 mg/day. Type 2 diabetes mellitus was defined by criteria for the diagnosis of dia-betes in non-pregnant adults shown in American diabetes association. Anti-glutamic acid decarboxylase (GAD) antibody was negative in all patients. All patients were treated with insulin, and none underwent hemodialysis.

Recombinant human EPO (rHuEPO) (Epoetin beta, Chu-gai Pharmaceutical Co.) was subcutaneously infused into the abdomen for 4 weeks at a flow rate of 6,000 IU/2.5ml/week using a portable infusion pump (SP-3HQ, Nipro Co., Japan). Both subjective and objective symp-toms were evaluated each day. Blood pressure and body weight were measured weekly. Blood samples were also obtained weekly in the morning after overnight fasting for 4 weeks before and after the start of rHuEPO administra-tion. Plasma samples were stored at -20°C until assay. Hb concentrations as well as plasma IGF-I and plasma EPO levels were measured.

The present study was carried out in accordance with the Helsinki Declaration of 1975. Written informed consent was obtained from all subjects.

Statistical analysis of the data was performed by ANOVA in combination with the Student's t-test. P<0.05 was con-sidered significant. Data are expressed as the mean± SD.

As shown in Fig. 1, plasma EPO levels were increased from 19.4±2.2 IU/L to 69.6±16.9 IU/L 1 week after the start of rHuEPO administration, and were maintained at a steady state. The effects of rHuEPO treatment on plasma IGF-I and Hb concentrations are shown in Fig. 2. Plasma IGF-I level at time 0 were 72.7±8.4 μg/L, lower than IGF-I levels in age-matched diabetic patients without nephropathy (166.0±15.5 μg/L). Plasma IGF-I levels were increased 1-3 weeks after the start of rHuEPO ad-ministration, followed by an increase in Hb concentra-tions 3-4 weeks after rHuEPO administration. Hb con--centrations were increased from 78±3 g/L to 86±3 g/L at 4 weeks after the start of rHuEPO administration. There were no significant changes in serum creatinine levels and blood urea nitrogen levels. Blood pressure and body weight did not change during the experimental period. 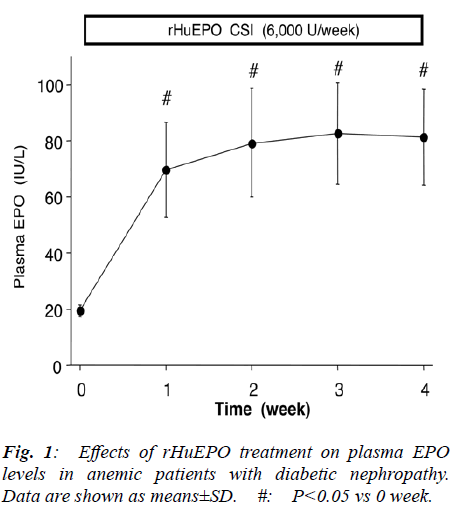 Figure 1: Effects of rHuEPO treatment on plasma EPO levels in anemic patients with diabetic nephropathy. Data are shown as means±SD. #: P<0.05 vs 0 week. 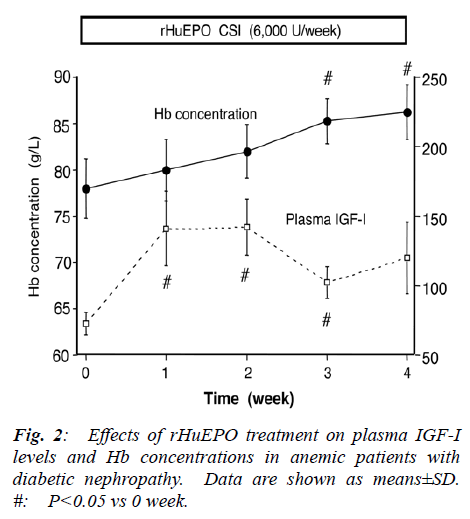 Figure 2: Effects of rHuEPO treatment on plasma IGF-I levels and Hb concentrations in anemic patients with diabetic nephropathy. Data are shown as means±SD. #: P<0.05 vs 0 week.

We have hypothesized that rHuEPO administration in-creases plasma IGF-I levels, followed by Hb concentra-tions. There have been few reports regarding the con-tribution of both rHuEPO therapy and IGF-I levels to the prevention of anemia. Brox et al have described that combination therapy with EPO and IGF-I induces a large increase in Hb concentrations in the mouse (14). They have suggested that anemia of CRF may represent both an EPO- and a functional-IGF-I deficient state. In human studies, there has been no report of the effects of rHuEPO therapy on plasma IGF-I and Hb concentrations in pre-dialysis CRF patients. In the present study, plasma IGF-I basal levels were decreased in diabetic patients with anemia of CRF compared with diabetic patients without anemia and diabetic nephropathy. Plasma IGF-I levels were increased to a normal range 1 - 3 weeks after rHuEPO administration. Such increases in plasma IGF-I levels were rapid. These findings may suggest that rHuEPO has a direct stimulatory effect on erythropoiesis as well as IGF-I production in humans. Although this study was small in scale and not a placebo control study

Our results suggest that increased IGF-I levels might be a good indicator of improved Hb concentrations. Therefore, a large-scale study is needed to clarify the relationship between rHuEPO treatment and IGF-I production.

IGF-I production is affected by diabetes mellitus in vivo. Plasma IGF-I levels are decreased in streptozoto-cin-induced diabetic rats (18), and the abundance of total hepatic IGF-I mRNA decreases after streptozotocin ad-ministration [19]. Circulating IGF-I levels decrease in patients with diabetes mellitus [20]. In addition, IGF-I levels are low in patients with diabetic complications, negatively correlating with HbA1c levels [21]. In the present study, plasma glucose control was good in all subjects (data not shown).

We administered rHuEPO by means of continuous subcu-taneous infusion (CSI). This method could maintain con-stant plasma EPO levels, which we believe is the physio-logical state. Intravenous injection resulted in transient increases in plasma EPO levels, producing non physio-logical conditions. We could not carry out a comparative study of CSI and SC injections. Therefore, a further com-parative study is needed.

In summary, we found that rHuEPO administration in-creases plasma IGF-I levels followed by Hb concentra-tions. It also appears that rHuEPO may have a stimula-tory effect on IGF-I production. These findings suggest that decreased IGF-I levels might play a role in the pro-gression of renal anemia in diabetic patients with renal failure and that increases in IGF-I might be a good indi-cator of improved Hb concentrations.

This work was supported in part by grants from the Renal Anemia Foundation, Japan.