In this paper, a three-dimensional spiral cochlear Finite Element (FE) model was established by using PATRAN software based on the experimental data of synchronous light source imaging from Shanghai Institute of Applied Physics, Chinese Academy of Sciences. The acoustic-solid-liquid coupling analysis was carried out by NASTRAN software and the effects of fissura ante fenestra sclerosis on spiral cochlea were simulated in the paper. The satisfactory agreements between simulated results of ratio of displacement at 12 mm from Basilar Membrane (BM) to that at the vestibular window and experimental data in the literature confirm the validity of the FE model. Comparing the frequency response of the basilar membrane of normal and diseased ears, it can be found that greater hearing loss occurs at low frequency (100-600 Hz) and high frequency (2000-10000 Hz), but the hearing loss is less in the middle frequency. In this paper, the numerical simulation is used to make up for the lack of related researches and it provides a new way for clinical treatment of cochlear lesions.

Otosclerosis is a common disease that often causes binaural or monaural progressive hearing loss. According to the different parts of otosclerosis lesions, otosclerosis is divided into vestibular window type, cochlear and mixed type, of which the most common type is the vestibular window. The primary site of vestibular window type otosclerosis is located in the fissura ante fenestra that begins in the perilymphatic space between vestibule and scala vestibule and contains connective tissue fibers [1]. The vestibular is located in the posterior part of the through the ear canal and ossicular chain, and then the excitation is exerted on the vestibular window, So that the basilar membrane BM in the cochlea vibrates in the vertical direction because of the different pressure of the two both side lymph. Finally, the hair cell and nerve fiber on the BM transform the vibration of the BM into nerve impulses and transmit the nerve signals to the brain center to generate hearing [2]. Obviously, fissura ante fenestra hardening will have a great impact on hearing. Although the experimental study on the structure of the cochlea is very necessary, it is not possible to test the human cochlea under the consideration of ethical problems. Experiments on animal cochlea are not only time-consuming and labor-intensive, but there is a big difference between animal cochlear and human cochlea. For example, the predilection site of vestibular window type otosclerosis is located in the fissura ante fenestra, but it is a human-specific organ. Thus, it is an effective alternative method to establish a finite element model with the actual properties of biological materials based on the principle of human anatomy. Many experts and scholars at home and abroad have carried out a large number of studies in the field of clinical medicine, theoretical analysis and numerical analysis, and have achieved some research results [3-6], but have not involved the numerical simulation of cochlear sclerosis hearing behavior characteristics. In view of this, this paper established a spiral Finite Element (FE) cochlear model in line with the actual human ear. This FE model considered the fluid-structure interaction between the lymphatic fluid and the surrounding structures and simulated the mechanical response of the cochlea when the window fissure hardens, and revealed the mechanism of sound transmission and destruction of the cochlea.

FE model of the spiral cochlea

Based on the related knowledge of ear anatomy, CT scan images of healthy volunteers provided by Zhongshan Hospital Affiliated to Fudan University were digitized by self-compiled program. Combined with the experimental data of Shanghai Light Source of CAS and references [7-9], the real threedimensional spiral FE cochlear model containing vestibular, scala tympani, lymphatic fluid, vestibular window, round window, basement membrane and helicotrema was optimized and established by MSC PATRAN software. And the frequency response analysis, modal analysis and transient response analysis were carried out on FE model by using NASTRAN software. 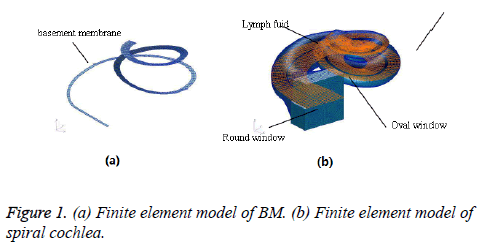 The material properties for the cochlear structure are listed in Table 1. The Poisson's ratio of each part was 0.3, the structural damping coefficient was taken as 0.4, the viscosity of the fluid was assumed as 0.001 NS/m2, and the damping coefficient was 0.0001 S [13].The velocity of the lymph gland was 1400 m.s-1, and the density was 1000 kg.m-3 [14,15]. In this paper, the Young’s modulus of the BM was linearly decreased from the base to the apex.

The outer edges of round window and vestibular window were defined as the fixed constraint. The BM and Reissner’s membrane were fluid-structure coupling interfaces. The outer edges of SV, ST, and helicotrema were assumed as relative rigid boundary.

Gundersen and Stenfelt et al. had conducted experiments on human temporal bone [16,17]. Applying 90 dB (0.632 Pa) sound pressure on the surface of the vestibular window, the ratio of BM displacement amplitude at 12 mm from the base of BM to stapes footplate displacement amplitude changes with frequency was obtained. Meanwhile, the Phase difference relationship which varies with frequency between BM phase and stapes footplate was obtained.

Because of the pressure gain of the external ear and middle ear, the 110 dB (6.32 Pa) sound pressure excitation was applied on the vestibular window, which was equivalent to the 90 dB (0.632) excitation on the surface of the external ear canal [18]. The frequency response curve of the 12 mm at the bottom of the BM and the stapes center was obtained by the FE model. The relationship of the ratio varying with frequency of displacement amplitude at 12 mm on BM and at the center of stapes footplate was calculated. Then, Figure 2 shows the experimental data of Gundersen et al., Stenfelt et al. and Kim et al. [16,17,19], and the results obtained from the FE model. Figure 3 shows the comparison between the calculated phase difference curves of this model and the experimental data of Gundersen et al. and Stenfelt et al [16,17]. 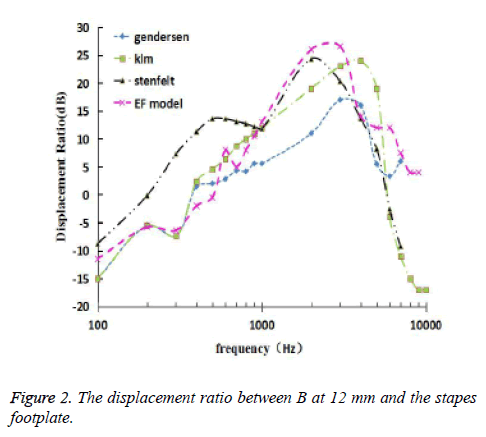 Figure 2: The displacement ratio between B at 12 mm and the stapes footplate. 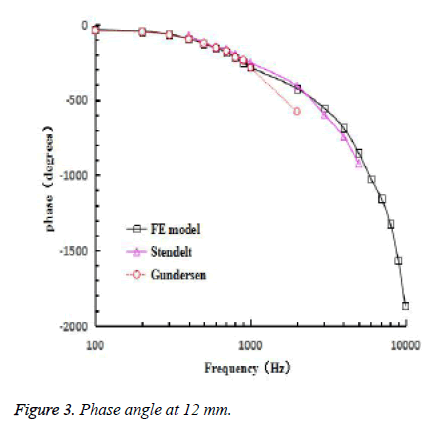 Pathology and numerical simulation of fissura ante fenestram sclerosis: The osseous labyrinth walls consist of three layers: the periosteal layer, the endogenous cartilage layer and the endosteal layer. The endogenous cartilage layer was characterized by retaining embryonic cartilage remnants, which are replaced by a new bone in the ear that had suffered from otosclerosis. Vestibular window type otosclerosis begins in the cartilage of fissura ante fenestra and Spreads to the surrounding bone. In the finite element model of this paper, by increasing the elastic modulus of the bone wall to simulate the fissura ante fenestra sclerosis, the sclerosis area was shown in the Figure 4. According to the literature [21,22], the elastic modulus of the bone was assumed as 100 times that of the normal physiological state. 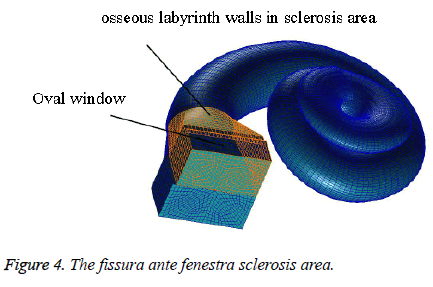 The sound field (fields) was established in PATRAN and different acoustic pressure (50 dB, 70 dB, 90 dB) excitation was applied to the cochlea. Then, the numerical simulation results were obtained by NASTRAN, which was shown in Figure 5. 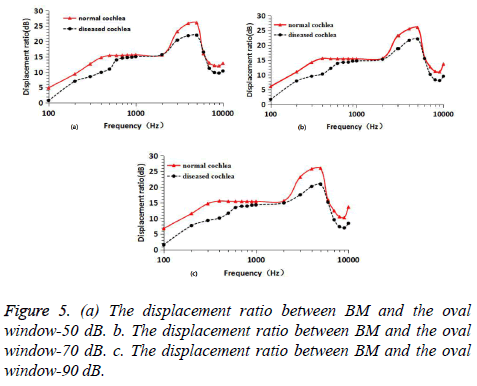 In this paper, a three-dimensional model of spiral cochlea which was in accordance with the actual human ear was established. The results from the model in this paper were in good agreement with experimental data, which confirmed the validity of the FE model. Based on the FE model and comparing the frequency-response curve of normal cochlea and diseased cochlea, the effect of fissura ante fenestra sclerosis was discussed. The results show that: under the different sound pressure (50 dB, 70 dB and 90 dB), the hearing loss caused by fissura ante fenestra sclerosis was basically the same, and with the increase of sound pressure, the hearing loss was also increased.

In this paper, the numerical simulation was used to make up for the lack of researches on the characteristics of the effects of fissura ante fenestra sclerosis on cochlea auditory behavior. In conclusion, the study in this paper provided a new way of thinking and theoretical support for clinical treatment of cochlear lesions.