Introduction: Edaravone (3-methyl-1-phenyl-2-pyrazolin-5-one) of a free radical scavenger has been widely used in treatment of acute ischemic stroke. However, effects of edaravone on hypoxic astrocytes have not been fully understood. Therefore, we investigated the effects by proteomic analysis.

Methods: We cultured human astrocytes under hypoxia and normoxia with or without edaravone. Then, we compared protein profiles of the astrocytes using 2-dimensional differential gel electrophoresis (2DDIGE). Further, we identified proteins affected by hypoxia and/or edaravone by mass spectrometry.

Conclusion: Edaravone suppressed a part of molecular responses of human astrocytes to hypoxia. Our data would support use of edaravone in acute ischemic stroke.

The neurovascular unit (NVU) is a functionally integrated structure that is mainly composed of neuronal cells, astrocytes, and microvascular endothelial cells [1,2]. NVU is thought to regulate the interaction between brain circulation and neuronal functions [1,2]. Thereby, sparing of the NVU functions would be important in treatment of acute ischemic stroke [3]. In brain parenchyma, endothelial cells of blood vessels are connected to astrocytes via the foot processes of astrocytes [4]. Similarly, neurons are also connected to astrocytes via other foot processes of astrocytes [1]. Thus, astrocytes play a central role in NVU as a regulator of the interactions between blood vessels and neurons. Furthermore, astrocytes also play a role in maintenance of homeostasis and regulation of responses of the central nervous system to injury [5,6]. From these backgrounds, sparing of astrocyte functions would be of critical importance for sparing of NVU functions in the treatment of acute ischemic stroke.

Edaravone (3-methyl-1-phenyl-2-pyrazolin-5-one) of a free radical scavenger has been widely used in the treatment of acute ischemic stroke [7,8]. Use of edaravone reduces infarction areas and ameliorates neurological deficits in patients with acute ischemic stroke [9]. Similarly, use of edaravone was suggested to improve outcomes of the patients with acute ischemic stroke who were treated with tissue plasminogen activator [10]. Edaravone is thought to work mainly as an antioxidant to inhibit lipid peroxidation [11-13]. However other effects of edaravone have been reported. For example, we reported that edaravone promoted formation of the tight junction between microvascular endothelial cells partly via the down-regulation of monocyte chemoattractant protein-1 secretion [14]. Furthermore, in hypoxic astrocytes, edaravone has been reported to down-regulate hypoxiainducible factor (HIF)-1 and inhibit the production of vascular endothelial growth factor (VEGF) that promotes brain edema [15,16]. However, effects of edaravone on hypoxic astrocytes have not been fully understood. Based on these backgrounds, we here attempted to investigate effects of edaravone on human brain astrocytes in the hypoxic condition by 2- dimensional fluorescence difference gel electrophoresis (2DDIGE) of a comprehensive protein profile analysis.

Treatment of astrocytes with edaravone

Proteins extracted from the astrocytes were separated by 2DDIGE. 2D-DIGE was performed as described previously [14,19,20]. An internal control sample was prepared by mixing an equal amount of samples from the 4 conditions of normoxia without edaravone, normoxia with edaravone, hypoxia without edaravone, and hypoxia with edaravone. The internal control sample was labeled with Cy3 (Cy Dye DIGE Saturation dye; GE Healthcare, Buckinghamshire, UK). Similarly, each of the treated protein samples was labeled with Cy5. Then, 2.5 μg of the Cy3-labeled internal control sample and 2.5 μg of the Cy5- labeled samples were mixed and applied onto an isoelectric focusing (IEF) gel (pH3-11, GE Healthcare). After IEF, the proteins were further separated by 12.5% SDS-PAGE, separated protein spots were detected using an image analyzer (Typhoon 9400 Imager, GE Healthcare). To compare protein spot intensity among the 4 groups, Cy5-fluorescent intensity of protein spots in each gel was normalized by Cy3-fluorescent intensity of the identical spots by using the Progeneosis software (Nonlinear Dynamics, Newcastle, UK), and the normalized Cy5-intensity was used for the comparison.

Protein identification was performed as described previously [14,19,20]. For identification of proteins, gel fragments that corresponded to protein spots of interest were recovered. Peptides, generated by in-gel digestion with trypsin, were extracted from the gel fragments and were subjected to MALDI-TOF/TOF mass spectrometry (Ultraflex, Bruker Daltonics, Bremen, Germany). The determined peptide masses were compiled to allow searches of the NCBI (National Center for Biotechnology Information) protein database using the Mascot software program (Matrix Svience, London, UK). 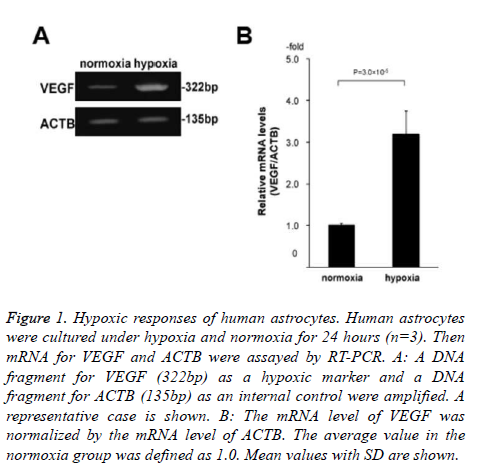 Figure 1. Hypoxic responses of human astrocytes. Human astrocytes were cultured under hypoxia and normoxia for 24 hours (n=3). Then mRNA for VEGF and ACTB were assayed by RT-PCR. A: A DNA fragment for VEGF (322bp) as a hypoxic marker and a DNA fragment for ACTB (135bp) as an internal control were amplified. A representative case is shown. B: The mRNA level of VEGF was normalized by the mRNA level of ACTB. The average value in the normoxia group was defined as 1.0. Mean values with SD are shown. 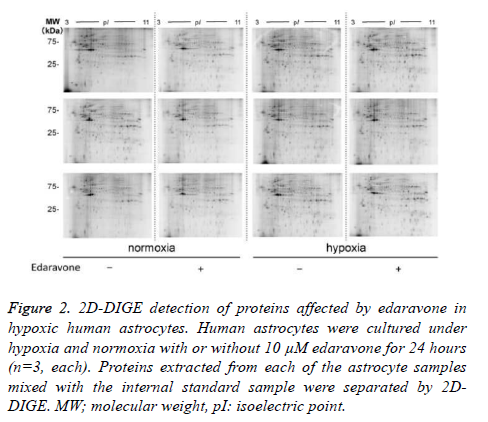 Figure 2. 2D-DIGE detection of proteins affected by edaravone in hypoxic human astrocytes. Human astrocytes were cultured under hypoxia and normoxia with or without 10 μM edaravone for 24 hours (n=3, each). Proteins extracted from each of the astrocyte samples mixed with the internal standard sample were separated by 2DDIGE. MW; molecular weight, pI: isoelectric point.

Table 1. Numbers of protein spots whose intensity was altered more than 1.3-fold by hypoxia and the alternation was suppressed by edaravone. 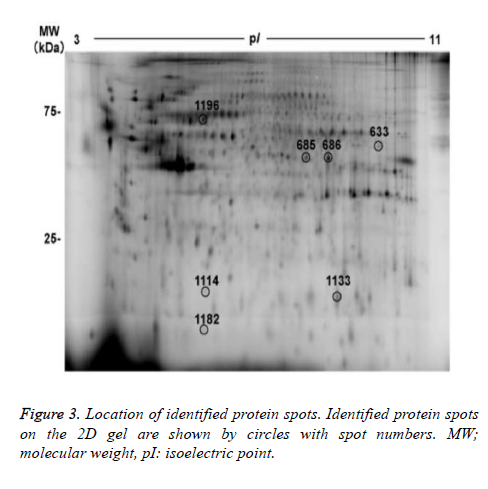 Table 2. Identification of protein spots whose intensity was altered more than 1.5-fold by hypoxia with statistical significance. 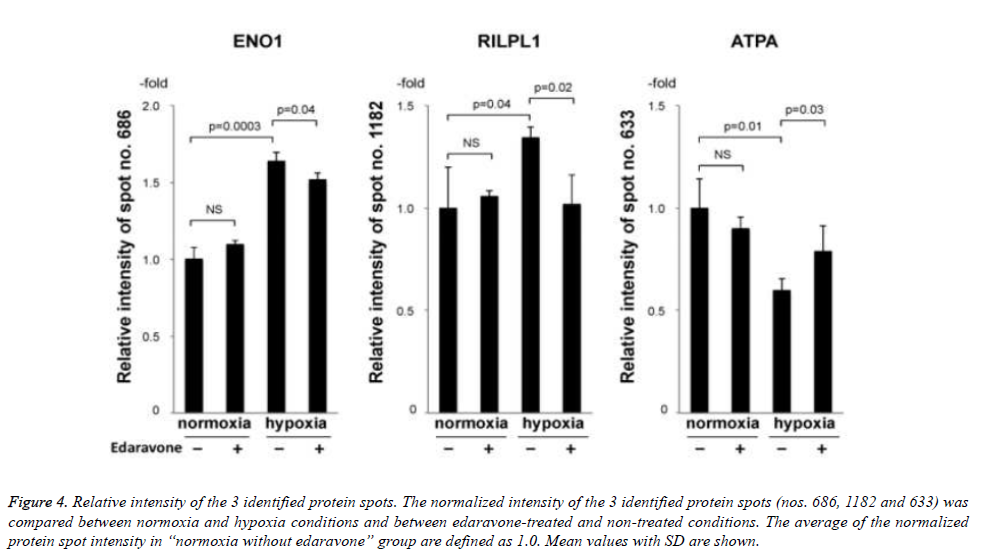 Table 3.Identification of proteins whose intensity changes by hypoxia were suppressed by edaravone with statistical significance.

We here found that edaravone suppressed a part of hypoxiainduced protein profile changes of astrocytes and that edaravone did not enhance the hypoxia-induced alteration of the profile. Our data indicate that use of edaravone in the treatment of acute ischemic stroke would be beneficial to protect astrocytes from hypoxia-induced damages. First, intensity of the protein spots of nos. 685, 1133, and 1182, which were assigned to ENO1, EFNB2, and RILPL1 respectively, was increased by hypoxia. The increase of these 3 proteins was in accordance with previous reports. Specifically, expression of ENO1 and EFNB2 was reported to be increased in hypoxic human astrocytes [21] and in hypoxic human trophoblast-derived cell lines [22], respectively. Since EFNB2 is an essential factor for differentiation of vascular endothelial cells into arterial endothelial cells [23], it is reasonable that the expression of EFNB2 was increased by hypoxia to maintain arterial endothelial structures.

Intensity of protein spot no. 633, identified as ATPA, was decreased by hypoxia and the change was suppressed by the simultaneous treatment with edaravone. ATPA is one of the 5 subunits of ATP synthesize. The ATP synthase contains subunits and among which decrease of ATP synthase subunit (ATPB) in hypoxic rats, decrease of ATPB and ATP synthase subunit in hypoxic mice, and decrease of ATPA and ATPB in hypoxic human macrophages were reported previously [28,29]. We found that edaravone suppressed the decrease of ATPA in hypoxic human astrocytes. It was recently reported that ATPA was decreased by hypoxia at least in part in a HIF-1- independent manner [24]. HIF-1 activity was suppressed by edaravone as above mentioned [15]. Taking these data together with ours, edaravone would suppress expression of ATPA in the hypoxia condition via both HIF-1-dependent and - independent pathways.

It was reported that hypoxia and/or oxidative stress suppressed the synthesis level of ATP in mitochondria, promoting the production of reactive oxygen species (ROS) [30-35]. Therefore, edaravone may suppress ROS production by maintaining the expression of ATPA in the hypoxic condition. The intensity of protein spot no. 1182, identified as RILPL1, was increased by hypoxia and the increase was fully suppressed by the treatment with edaravone. Thereby, RILPL1 would be deeply involved in the functions of edaravone in hypoxia, however, functions of RILPL1 have been little understood. The relationship among hypoxia, RILPL1, and edaravone should be investigated in the future. In conclusion, edaravone suppressed a part of molecular responses of human astrocytes to hypoxia, but did not enhance any of the responses. Although molecular functions of edaravone should be investigated in more detailed, our data here would support the current clinical use of edaravone for the treatment of acute ischemic stroke.

We thank Ms. Y. Sawada, Ms. M. Yokoyama and Ms. A. Nozawa for their technical assistance.