Background and Objective: Chondrocytes in the growth plate are a major player in the process of endochondral ossification through from proliferation to hypertrophy, leading to the longitudinal growth of the skeleton. Exercise promotes the longitudinal growth, whereas excessive exercise inhibits bone growth. The exercise condition is defined as a combination of intensity, frequency, and duration; and what these combinations leading to the best for the bone growth remain unclear. Our objective was to determine what combination of different exercise conditions lead to the best for a favorable response in the growth plate.

Conclusion: Our results suggest that chondrocyte activity and bone metabolism promote in highintensity and low-frequency and long-duration in young mice. These findings may shed light on the underlying of the promotion of the longitudinal bone growth by exercise.

The growth plate chondrocytes are a major player in the process of endochondral ossification through from proliferation to hypertrophy that contributes to the longitudinal growth of the skeleton [3-5]. An animal study has reported that treadmill exercise increases the mRNA expression of type X collagen synthesized by hypertrophic chondrocytes in the increased growth plate and decreases the thickness of the growth plate (the proliferative and hypertrophic zones) [6,7]. Also, swimming did not change the number of hypertrophic chondrocytes, whereas increased the thickness of the growth plate and the number of proliferative chondrocyte [8]. Owing to the discrepancies among these results so far, the response in the growth plate is controversial and remains elusive, although the longitudinal growth of the bone is greatly affected by exercise. These controversial results can be related to particularly exercise conditions as well as ages or exercise modes.

The exercise condition is defined as a combination of intensity, frequency, and duration [9]. In a growing child, exercise with a more than 3-fold higher impact loading of body weight heavily influences the bone compared with swimming and highintensity exercise increases the bone mass and strength [10-13]. On the other hand, children involved in high-intensity sports are more susceptible to trauma in the growth plate and therefore the training program with low intensity and large quantity is now recommended [14,15]. Taken together, moderate exercise has a favorable effect on the bone growth, but excessive exercise inhibits the bone growth and leads to destruction [3]. However, what combination of intensity, frequency, and duration leading to the best for the bone growth is still poorly understood.

Our objective was to determine what combination of different exercise conditions leads to the best for a cell response in the growth plate. To reach our goal, we quantified histologic characteristics in the growth plate after different treadmill exercises in a growing mouse.

All experimental procedures were examined by the Institutional Animal Care and Use Committee, approved by the president of Kobe University, and performed according to the Kobe University Animal Experimentation Regulations. A total of 27 male C57BL/6J mice (7 weeks old, 19-24 g mean body weight, Japan SLC Inc., Japan) were used for this study. The 7 weeks old of a mouse corresponds to the growth period [16]. Animals were housed in standard cages under a 12 h dark/light cycle at a constant temperature of 22 ± 1°C and allowed free access to standard food and water. These mice were randomly divided into a control group and 8 exercise groups. The right and left hind legs of each animal served as different samples, and 4 out of 6 legs in each group were randomly selected. Total 36 tibias were assessed by histological, immunohistochemical, and histomorphometric analyses.

We prepared un-decalcified frozen sections as previously described in the literature [20]. All mice were sacrificed by exsanguination under anaesthesia and tibias were harvested at the end of the experimental period. The samples were then immediately freeze-embedded with 5% carboxymethyl cellulose gel. Blocks were cut into slices, and 5-μm frontal sections of the proximal tibia were prepared.

We measured the ALP and TRAP activity area on digitized images of histological sections. Briefly, ALP and TRAPstained histological images were split into separate channels, and these positive cells at the entire epiphysis were identified on the red and blue channel grayscale images respectively by a certain threshold with Image J 1.50 (National Institutes of Health, Bethesda, MD, USA). Then, the ALP and TRAP activity area per total area was calculated, and the mean area for each specimen was derived by averaging measurements from different 3 regions.

The frozen sections were incubated with rabbit monoclonal anti-proliferating cell nuclear antigen (PCNA) (diluted 1:1000, #13110, Cell Signaling Technology Japan, Japan) or rabbit polyclonal anti-Type X collagen (diluted 1:10000, LB-0092, LSL, Japan) antibodies. Subsequent reaction was made by streptavidin-biotin-peroxidase complex technique with an Elite ABC kit (diluted 1:50, PK-6100, Vector Laboratories, USA). Color was then developed with 3, 3’-diaminobenzidine tetrahydrochloride (K3466, Dako Japan, and Japan). The sections were finally counterstained with hematoxylin, washed in water, and cover slipped. The section of PCNA staining and type X collagen staining were captured with a light microscope (BX-53) at a magnification of 40X and 20X, respectively. Then, the standardized rectangular field (0.09 mm2 for PCNA or 0.37 mm2 for type X collagen) was superimposed over the histologic sections. We counted manually these immunepositive cells within the rectangular field at different 3 regions and calculated the mean number.

Results for the thickness of growth plate, PCNA or collagen type X positive cell numbers in the growth plate, and activity area of ALP or TRAP in the primary spongiosa were analyzed statistically with JMP 7 (IBM Japan, Tokyo, Japan). Normality of distribution was assessed with the Shapiro-Wilk test. When normality was observed in all assays, the results were compared among all groups with ANOVA followed by LSD significant difference test. An alpha of less than 0.05 was chosen as the significance level for all statistical analyses. All values in the text and figures are presented as mean ± Standard Error (SE).

Thickness of the growth plate

Histologically, growth plates remained open continuously without partial closure in all groups (Figure 1A). Cartilage matrix staining to safranin as a reflection of proteoglycan content showed no difference among the groups. The thickness of the growth plate significantly increased in the HLS, HLL and HLS groups, when compared to the control group (Figure 1B). 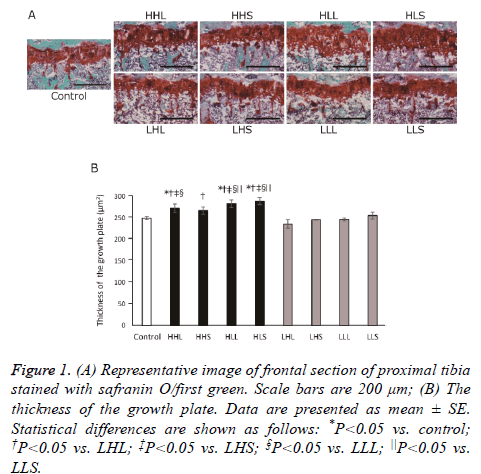 We observed the localization of PCNA as a marker of cell proliferation. The PCNA-positive cells distributed in the proliferative zone of the growth plate in all groups (Figure 2A); The number of these cells significantly increased in 3 highintensity groups compared with the LHL and LLS groups, and in the HHS, HLL, and HLS groups compared with LHS group (Figure 2B). However, there were no differences between all exercise groups and the control group. 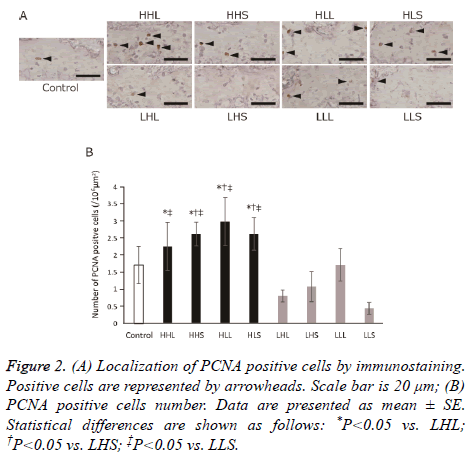 The type X collagen-positive cells, hypertrophic chondrocytes, distributed in the calcification zone of the growth plate in all groups (Figure 3A); The numbers of these cells significantly increased in the HHL and HLL groups compared with the LHL group, and in the HLL and HLS groups compared with the LHS and LLL groups (Figure 3B), although no statistical difference was found when comparing the control group. 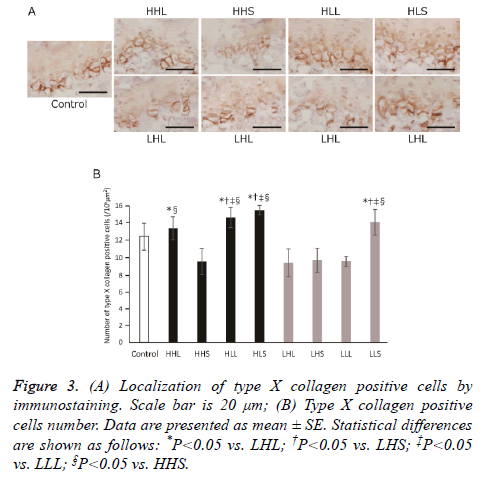 Localization of the ALP and TRAP activity 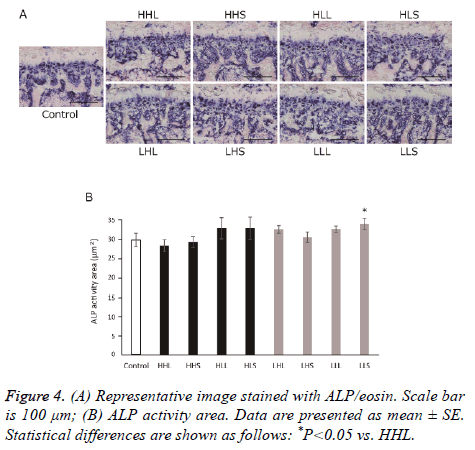 Figure 4: (A) Representative image stained with ALP/eosin. Scale bar is 100 μm; (B) ALP activity area. Data are presented as mean ± SE. Statistical differences are shown as follows: *P<0.05 vs. HHL. 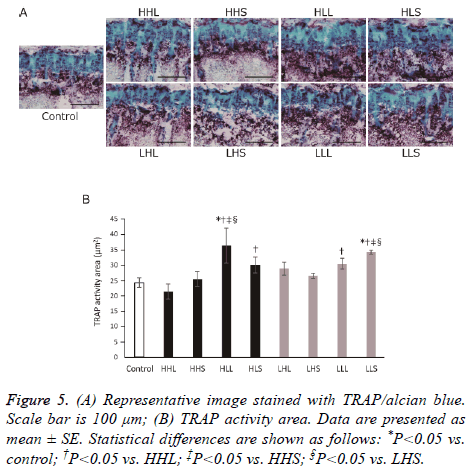 We quantified histologic characteristics in the tibial growth plate of a growing mouse to determine what combination of intensity, frequency, and duration leading to the best for the longitudinal growth of the bone. As a result, the thickness of the growth plate, cell proliferation, and the number of hypertrophic chondrocytes in the growth plate more increased in the high-intensity exercise than that in the low-intensity. Furthermore, osteoclasts in the primary spongiosa increased by high-intensity and low-frequency and long-duration exercise. These findings suggest that the cell activity and bone metabolism from the growth plate to primary spongiosa promoted by high-intensity exercise in addition to lowfrequency and long-duration.

The low-intensity exercise has led to low activities of chondrocytes and no change in the thickness of the growth plate compared to the high-intensity exercise. The exercise speed of 10 m/min corresponds to walking in the C57BL/6J mice and then 8 m/min in this study regarded as low-intensity walking exercise [18]. Our results indicate that walking exercise did not affect the chondrocytic activities and the thickness of the growth plate.

The high-intensity running exercise has promoted cell proliferation and hypertrophy in the growth plate, and eventually increased the thickness of the growth plate. Additionally, we revealed that the osteoclast activities in the primary spongiosa promoted by the high-intensity and lowfrequency and long-duration exercise. A potential weakness of the study is that the growth in length of long bones itself was not measure directly, although the thickness the growth plate was evaluated. Our results suggest that chondrocyte activity and bone metabolism promote in high-intensity and lowfrequency and long-duration in young mice, and these findings may shed light on the underlying of the promotion of the longitudinal bone growth by exercise.

This study was supported in part by Japan Society for the Promotion of Science (JSPS) KAKENHI Grant Number 25702032.