Objective: To investigate the effects of autologous Adipose Stem Cells (ASCs) on the thickness of dermis and the number of fibroblasts in nude mice. As a result, relevant experimental basis was provided for clinical application of autologous ASCs in skin photoaging therapy.

External environmental factors such as ultraviolet radiation, wind, sun and other skin aging caused by aging are often referred to as exogenous aging, as opposed to intrinsic aging. Ultraviolet radiation in sunlight is the most important factor causing exogenous skin aging, so ultraviolet radiation caused by skin aging can also be called photoaging. Long-term sunlight can lead to changes in the cell composition of the skin, as well as the organizational structure, while the changes in the dermis composition caused by light are most characteristic. Photoaging mainly caused thinning of dermis thickness, decreased fibroblasts number and synthesis function, showing dry skin, increased wrinkles and decreased skin elasticity. Adipose tissue-derived stem cells (ASCs) [1] can secrete a variety of cytokines. At present, a large number of experimental studies have proved that autologous adipose stem cells have a certain anti-aging effect restoring skin elasticity and inhibiting wrinkles, but the specific mechanism is not clear [2]. In this study, by establishing photoaging nude mouse model, the effects of ASCs on the thickness of dermis and the number of fibroblasts in nude mice were observed. The experimental basis for adipose-derived stem cells in anti-aging therapy was provided.

Ethical approval was given by the medical ethics committee of Shenzhen People’s Hospital, Second Affiliated Hospital of Jinan University Medical College with the following reference number: 2016016.50 Health class SPF class balb/c nude mice are weighed 20-22 g with 25 male and 25 female. All animals are raised in our laboratory animal center.

Construction of photoaging nude mouse model: Photoaging nude mouse models were built according to the relevant literature and pre-experimental results [3,4]. Ultraviolet radiation method: the nude mice in 4 groups were given ultraviolet radiation 180 m J/cm2 in the first week. The energy in the 2-4 w was 240, 300 and 360 m J/cm2, respectively. The energy maintained 360 m J/cm2 in 5 to 8 w. Daily exposure was 30 min in the first week, and increased to 60 min/d after a week.

Isolation and culture of autologous adipose ASCs: In this study, autologous bilateral inguinal fat of nude mouse was selected as tissue source for separation, culture and passage. The specific procedure was discussed below. Firstly, bilateral groin fat pad of intact nude mouse was placed in a petri dish. It was then repeatedly rinsed with PBS, and 0.1% type I collagenase was adopted for digestion, shock and centrifugation. The precipitation in the bottom was taken and resuspended, leaving the cell suspension inoculated in the culture dish, and cultured in 5% CO2 incubator at room temperature. The medium was changed after 24-48 h, and nonadherent cells were removed. When the fusion cells reached 80%, 0.05% trypsin was used for digestion passage. After ASCs passaging to the third generation, trypsin digestion, centrifugation and PBS resuspension were performed, resulting in a solution of concentration at 1 × 106/ml for standby application.

SPSS19.0 software was used for statistical analysis. The results were analysed by one-way ANOVA and P<0.05 was considered statistically significant. 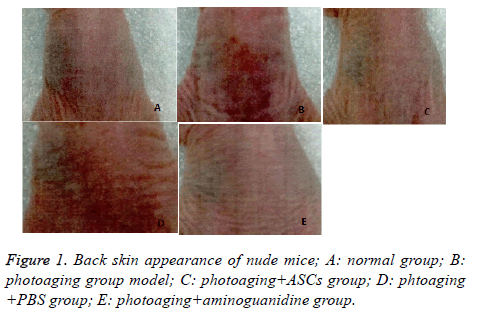 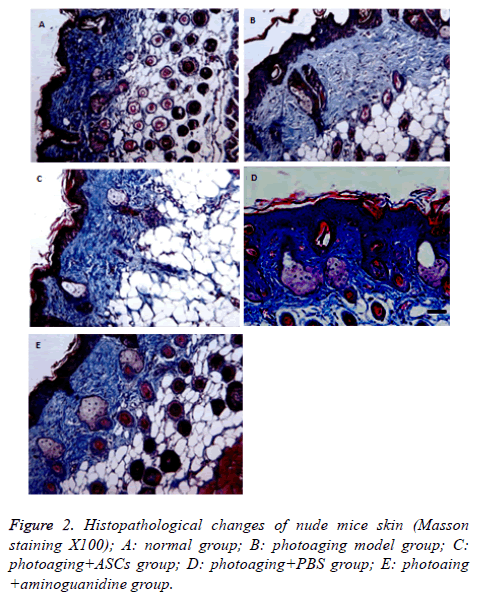 Table 1. Comparison of dermal thickness and number of fibroblasts in dorsal skin of nude mice in each group.

UVA and UVB are the most important spectrums in ultraviolet light causing skin light damage and aging. Moreover, UVB can cause DNA damage, skin aging or damage, and even induce skin cancer. In this way, the prevention and treatment of skin damage caused by light has now become a research hotspot.

ASCs [5,6] are source of mesenchymal stem cells in mesoblast, which have multi-directional differentiation potential and play an important role in the field of tissue engineering seed cell research. It is generally believed that autologous fat is the best tissue filling material, and a large number of studies [7,8] have found that ASCs have a high effectiveness in anti-aging, soft tissue injury repair, and promoting grafted fat survival. Some scholars have found that subcutaneous injection of adipose tissue can improve skin aging [9,10], thus producing new collagen and keeping the skin firm. In recent years, it has been clarified that ASCs could activate fibroblasts by secreted cytokines for skin aging treatment. Through differentiation, type I, IV and V collagens were stimulated, and fibroblasts were reorganized to increase the matrix composition of skin cell, so as to achieve the effect of dermal tissue and skin structure repair [11,12]. In this study, we observed the effect of autologous ASCs on the thickness of dermis and the number of fibroblasts by constructing nude mice photoaging group.

In this study, the photoaging model was constructed by ultraviolet irradiating the dorsal skin of nude mice. Compared with normal nude mice, skin color of photoaging nude mice was pale and short of luster. Besides, some nude mice had obvious wrinkles and even mild erythema at the back. Tissue staining showed the dermal layer of photoaging nude mice was thinning with dermal cells arranged irregularly. Collagen fibers were uneven stained, with inhomogeneous distribution and irregular rearrangement. The number of fibroblasts was significantly reduced in dermis. After injection of ASCs in the dermis, the gloss and skin color were improved. Histopathological manifestations of the dermis layer thickness were similar to that in normal group with no significant difference. It was found that collagen fibers were rich in dermis layer and were neatly arranged after injection. The number of fibroblasts was significantly higher than that of the model group, and there’s no significant difference with normal group.

Advanced glycosylation of the final product by nonenzymatic glycosylation made the protein brown, fluorescent and crosslinked, promoting all kinds of aging symptoms. It was found that non-enzymatic glycosylation on the skin's aging mainly relied on collagen fibers and elastic fibers, resulting in wrinkles and decreased skin elasticity. Aminoguanidine [13,14] is an inhibitor of advanced glycosylation final products, which has been found to promote angiogenesis and wound healing in previous studies and is currently an important research spot in delaying skin aging. Therefore, in this study, aminoguanidine was selected as a positive control group. The study also found that in photoaging+aminoguanidine group and photoaging +ASCs groups, dermal layer thickness and fibroblast cells numbers were significantly higher than those in the model group. The indications were similar to those in normal group. The above results showed that ASCs transplantation could significantly increase the thickness of dermal layer in nude mice, as well as the number of fibroblasts. In a word, ASCs transplantation can be used to prevent skin aging.

A variety of factors were considered for clinical use of stem cells, such as how to differentiate stem cells with differentiation ability and establish an effective threedimensional structure to ensure the survival and tissue regeneration of differentiated cells [15,16]. Although ASCs have been shown to have good anti-aging effects in the experiment, their safety, stability and mechanisms related to anti-photoaging have not been fully elucidated, which will be the focus of future research.