Methods: We searched 7 databases and screened 11 studies from 267 articles by excluded the studies which did not reach inclusion criteria. Studies selection and data extraction were performed by two reviewers independently. Finally, the Review Manager Software was utilized to pool data, and evaluated the overall level of the evidence using Grading of Recommendations Assessment, Development, and Evaluation (GRADE) criteria.

Conclusion: The current evidence on RKAB therapy for POF is insufficient to draw a firm conclusion due to scarcity of studies with a low risk of bias and likely publication bias. Future rigorously designed studies are needed to confirm the effectiveness of RKAB therapy in patients with POF.

Premature ovarian failure (POF) is a serious disease that affects women’s reproductive, physical and mental health. Often accompanied by symptoms of perimenopause, such as hot flushes, vaginal dryness, dysphoric and night sweats, which are similar to those of a natural menopause [1]. The morbidity of POF is approximately 1%-3%, accounted for secondly amenorrhea 2%-10%, and there is on the rise in recent years.

Although some researches of POF are given to explain, most of the reasons were gene mutations, autoimmune disorders and environmental factors, the causes of POF remain unclear so far [2]. Most experts recommend that estrogen and progestin replacement therapy is an appropriate option for POF patient.

Although hormone replacement therapy (HRT) as a regular treatment were recommend by most experts [3], it has an inevitable adverse effect (AEs), like increase risks of strokes, breast cancer, heart attacks, and endometrial cancer [4]. Therefore, it needs to consider whether there is a better alternative therapy to displace HRT in women with POF.

Premature ovarian failure was defined as “Xueku” or “Xuejie” in Traditional Chinese Medicine (TCM) [5,6]. Chinese Herbal already has been used to alleviate the symptoms of POF in the past 2000 y, especially reinforcing kidney and activating blood (RKAB) therapy [7,8]. It is a kind of decoctions which belong to TCM and compose of Chinese herbal medicine such as “Shengdi” “Shudi” “Tusizi” “Yinyanghuo” [9]. Moreover, it has been found to be effective in relieving POF symptoms [10]. However, there is no systematic review of the efficacy effects of RKAB on POF. Therefore, it is necessary to summarize and evaluate the current evidence from RCTs on the effects of RKAB in patients with POF.

Criteria for considering studies for this review

Types of participants: Women who were diagnosed with POF were considered. The diagnostic criteria for POF: 1) Women who were less than 40 y old; 2) Twice serum FSH levels detection above 40 IU/L (interval time of detection at least 1 month or more); 3) Amenorrhea for 4 months or more. Other diseases such as insensitive ovarian syndrome, polycystic ovary syndrome and diminished ovarian reserve were excluded.

Types of interventions: We included trials in which decoction of RKAB therapy, regardless of formulas of decoction. Other therapy like strengthening spleen or smoothing liver as an additional were also included as long as RKAB is the primary intervention method. We excluded the studies which combined RKAB with other TCM therapy such as acupuncture or electro-acupuncture.

Types of control groups: We included the trials which adopted the HRT conventional treatments for a control group. Moreover, the trials of both treatment and control group adopted HRT therapy were also included. The treatment comparisons investigated in this review listed below.

2. RKAB plus HRT versus HRT

We have searched three International and four Chinese databases, the following electronic databases:

Two reviewers (Weihao and Yuron) examined titles and abstracts independently retrieved from the search results to select the potential studies. Then checked the studies whether meet the inclusion criteria by the same reviewer (Weihao and Yurong) independently. The studies which did not meet the inclusion criteria were excluded. And the authors’ name, title of article and institution were blinded to reviewer for avoiding subjectivity. We discussed disagreement with the third author (Min) to reach consensus.

Two reviewers (Weihao and Xiaoqian) evaluated the risk of bias of the included studies which provided by the Cochrane Collaboration [11]. And we examined the risk of bias based on seven parts, which of selection bias (random sequence generation and allocation concealment), performance bias (blinding of participants and personnel), detection bias (blinding of outcome assessment), attrition bias (incomplete outcome data), reporting bias (selective reporting), and other bias. We resolved all the disagreements between two authors by discussing with the third author (Min Ma) to reach consensus.

The Review Manager (RevMan) Software (Version 5.3 Copenhagen: The Nordic Cochrane Centre, The Cochrane Collaboration, 2014) was utilized to pool and analyse data. We divided the trials into subgroup based on the type of intervention (RKAB alone and RKAB as an adjunct), type of outcome measure (hormone levels and clinical curative efficiency). Since the clinical curative efficiency is the dichotomous variable, we pooled the data and expressed as odds ratios (OR) and 95% confidence intervals (CI) to describe the results. For the hormonal outcomes, it belongs to continuous variables; therefore the data were pooled and expressed as mean differences (MD) and 95% confidence intervals (CI).

Results of the search

The original search results screened and identified 267 articles. 241 studies were excluded according to the title and abstract and retrieved 26 studies for more detailed assessment. Then we exclude 15 studies based on additional reports of include trials not contributing data, unreasonable study design and included 11 studies which met the inclusion criteria in this systematic review finally (Figure 1). 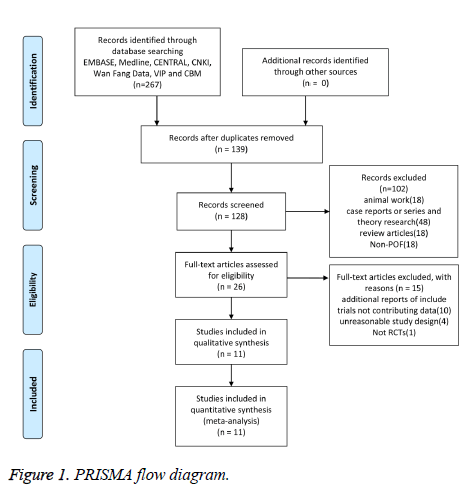 Eleven RCTs studies, including 1044 participants (534 in experiment group and 510 in control group) reached the inclusion criteria. All studies originated from China and published in Chinese medical literature databases and went through the peer-reviewed process.

Table 1: The characteristics of included studies.

Risk of bias in included studies 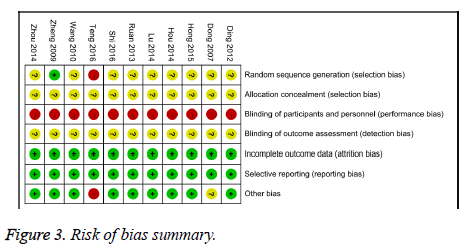 Primary outcomes: FSH serum level: The level of serum FSH was reported by all studies. The test of heterogeneity was considerable heterogeneity (I2=90%, P<0.00001), therefore we pool the data with the random-effect model. The results indicated a statistically significant difference in FSH level between the RKAB group and the control group (MD -5.50, 95% CI: -8.14, -2.86, P<0.0001) which suggests that RKAB therapy can significant decrease the serum FSH level in the treatment group than control group (Figure 4). 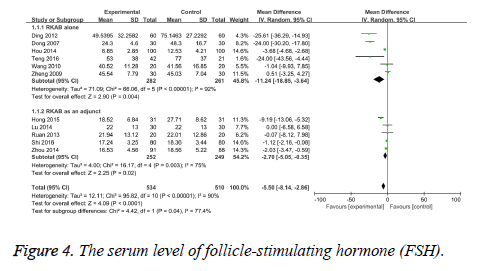 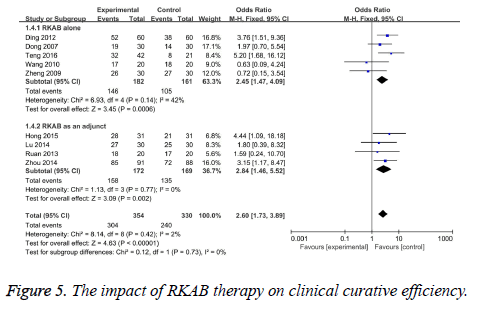 Figure 5: The impact of RKAB therapy on clinical curative efficiency. 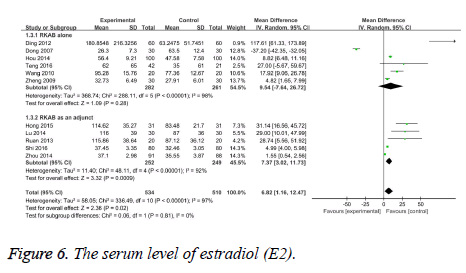 LH serum level: The level of serum LH was reported by all studies. The test of heterogeneity was considerable heterogeneity (I2=89%, P<0.00001), therefore we pool the data with the random-effect model. The results indicated a statistically significant difference in LH levels between the RKAB group and the control group (MD -3.33, 95% CI: -5.09, -1.57, P=0.0002) which suggests that RKAB therapy can prominently decrease the serum LH level in the treatment group than the control group (Figure 7). 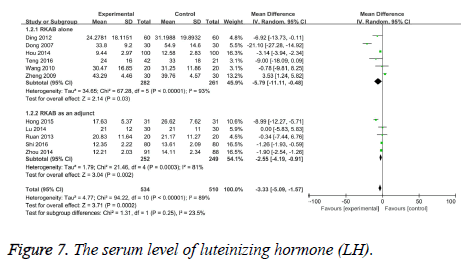 We included sufficient studies in this systematic review so we can make a funnel plot for publication bias of serum hormone level and clinical curative efficiency respectively. From the funnel plot, it suggested that there were potential publication biases by visual asymmetry in this meta-analysis (Figures 8 and 9). 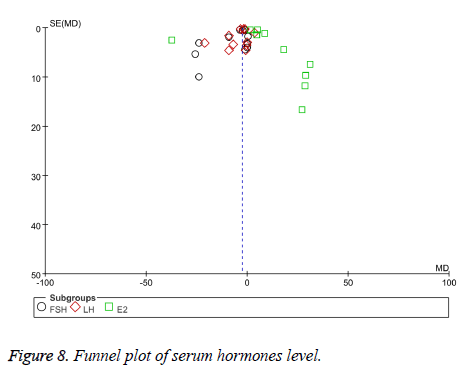 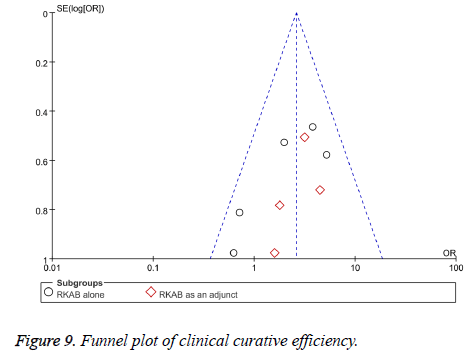 We perform sensitivity analysis in this systematic review by change the mode of statistic (fixed-effect and random-effect model) and effect size in serum hormone levels (MD and SMD) and clinical curative efficiency (OR and RR). Even so, we found that the results were not changed.

The level of evidence was assessed according to GRADE from low to moderate (Figure 10). We assessed all outcomes a downgrade primally because blinding, randomization process and allocation concealment were not mentioned in most of the studies. Furthermore, we assessed an inconsistency of all outcomes downgraded except clinical curative efficiency. 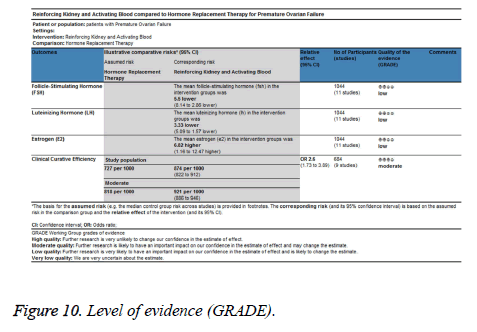 From the outcomes in this systematic review, it has indicated that RKAB therapy could significant decrease FSH and LH serum levels, increase E2 levels as well as improve the efficiency of clinical curative on POF patients. The results seem favorable in all outcomes however it should be interpreted carefully because of the high risk of bias of binding and reporting. We assessed a “moderate” level to clinical curative efficiency using GRADE. The quality of evidence of FSH, E2 and LH serum level were “low” because of the serious risk of bias and inconsistency.

Potential mechanism of RKAB in POF

As a result of modern medical research, the cause of premature ovarian failure was various and complicated which include chromosome aberrations, gene mutations, autoimmunity, congenital enzyme reduction or lack of, the barrier of gonadotropin, infection factors, reproduction factors, social psychological factors or environment pollution [23]. RKAB therapy has an effect in POF possibility by regulating hypothalamic-pituitary-ovary axis (HPOA) [24]. Beyond that, RKAB therapy may regulate the autonomic nervous system, increase blood flow in ovarian, improve the level of INH-b (serum inhibin B) and improve the reactive of ovarian response to FSH to have an effect on POF [25]. From the etiology and pathogenesis in TCM, “Xueku” which is the disease as same as POF was caused by kidney-deficiency, spleen-deficiency, blood-deficiency, qi stagnation and blood stasis or phlegm stagnation [26]. Like HPOA, there also was a similar theory in TCM which of kidney-tiangui-chongren-uterus axis [27]. Dominated by the kidney, regulate by Tiangui, through the full and empty of blood in chongren, finally have an effect on the ovary. Although there are various hypotheses, we couldn’t know which one is closer to the truth.

In this review, we include eleven trials to assess RKAB therapy in the treatment of patients with premature ovarian failure. As a result, we founded that RKAB therapy significantly decreased FSH serum level and LH serum level, while increase E2 serum levels as well as improvement in clinical curative efficiency. The result seems favorable in all outcomes of pool data. However, it should be interpreted carefully due to the unclear risk of selection bias, the high risk of performance bias, the unclear risk of detection bias and publication bias. Furthermore, we couldn’t make a confirm conclusion of which RKAB therapy could maintain the long-term efficacy because just two studies [19,20] reported follow-up time. It needs more rigorous study design, large sample size and follow-up to ensure RKAB therapy actually could improve hormone levels and clinical curative efficiency no matter in short-term or longterm. In addition, without the adequate method of allocation concealment and blinding, the final results of the intervention effect may be exaggerated [28,29]. Although Chinese herbals of placebo were adopted in other trials to exclude placebo effect, none of included studies set a placebo group in this systematic review. However, placebo effects in biochemical parameters were less sensitive than some subjective symptoms such as gastric, hot flushes and dysphoric according to a recent study [30]. In this review, the serum hormone levels belong to biochemical parameters. So how much it will affect the outcomes of hormone levels without a placebo group, this is need to be considered.

This systematic review and meta-analysis suggest that RKAB therapy could improve the serum levels of the hormone as well as improvement in the clinical curative efficiency in patients with POF. However, because of the high risk of bias and insufficient follow-up studies, it is necessary to carry out more rigorously designed studies to confirm the effectiveness in patients with POF.