Methods: Teeth of 12 patients were grouped into three groups and received corresponding treatment, with at least 3 teeth in each patient (n=40). All treatments were performed immediately after teeth extraction. Sockets in Groups 1 and 2 were treated with PCS and GBR respectively while sockets in Group 3 did not receive any preservative treatment. Alveolar crestal width and height before extraction and 8-week post-extraction and bone densities 8-week post extraction were measured with Cone Beam CT (CBCT). Changes of alveolar crestal width and height were calculated by subtracting the value 8- week post extraction with the value before extraction.

Conclusions: PCS exerts comparable effects on socket preservation after tooth extraction with GBR. Since the cost for PCS is much lower than that of GBR, PCS can be used as an alternative to GBR for wider application in oral clinics.

Recent clinical studies with controls illustrated that Guided Bone Regeneration (GBR) was an effective treatment for socket preservation [4]. Avila-Ortiz and colleagues found a membrane in the treatment site, no matter resorbed or not, brought great benefit for preserving mid-buccal and mid-lingual alveolar bone height [1]. The mostly used bone graft material and resorbable membrane are deproteinized bovine bone granules (Bio-Oss, Geistlich, Switzerland) and resorbable collagen sponge (Bio-Guide, Geistlich, Switzerland). Moreover, superiority of combined use of the two materials over other bone graft material and membrane was suggested in some study [5].

However, in clinical practice, the cost for GBR is quite expensive, so cheaper alternatives have been being explored. Among them, Protein Collagen Sponge (PCS) was found to be effective [6]. Classical products of PCS were produced in China and abroad companies [7]. Although the procedure for applying PCS is quite simple in clinic and acceptable effects for preserving alveolar ridge with PCS has been reported in other tissues [6-8], it’s application in oral and teeth has not been explored and the effectiveness of GBR and PCS has not been compared either.

Considering the lower cost of PCS, we aim to investigate whether PCS can completely or partially replace the GBR and provide clinical basis for clinical application of PCS.

Inclusion criteria: Twelve patients, 8 male and 4 female, aged 43-66 years with a mean age of 53 years, were recruited in this study. All participants had no smoking habit and remained in good health condition, without other complications such as diabetes mellitus and hypertension, etc. A total of 40 teeth (at least three teeth for each patient) were extracted because of periodontitis, trauma, or endodontic problems. Any symptoms of residual teeth were well controlled. Minimally invasive extraction was performed as described [9] to protect socket walls and peri-alveolar keratinized gingivae tissue. All patients remained stable during subsequent observation.

All procedures followed ethical regulations including the World Medical Association Declaration of Helsinki [10]. This study was approved by local medical ethics committee, No. hbbdsdezxyy-20151017-2. Written informed consents were obtained from all participants.

Sockets within each patient were grouped for different treatment. PCS and GBR were applied in one socket for each patient and remaining socket (s) served as controls. The choice between experimental and control sockets was made by patients themselves. Patients received antibiotics for 4 days and moth-rinse for 2 weeks. The sutures were removed 10 days after surgery and patients received well-instructed oral hygiene since then. Temporary prosthetic restorations were made with or without support of the rest teeth. The basement of prosthetics was relieved in the region of the studied sockets to avoid resorption of the bone due to pressure points. Implants (Straumman, Switzerland) were placed after an average recovery time of 10 weeks.

Group 1 (PCS): Socket was filled with tailored KeJiBang protein collagen sponge to the crest level (Figure 1), and was cross-sutured with 4-0 coated Vicryl suture. 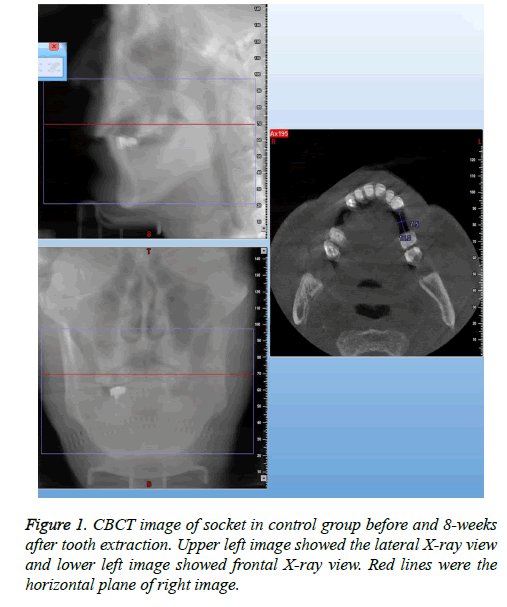 Group 2 (GBR): The margin of socket was bluntly dissected for 2-3 mm space between alveolar ridge and lining epithelium. The alveolar socket was filled with bone graft to crestal level, compressed slightly, and covered with tailored membrane, with the margin of membrane placed in the space premade, and was cross sutured-with 4-0 coated-Vicryl suture.

Group 3 (Control): The socket was filled with intact blood clot, and was sutured as previously described.

Crestal width and height of the alveolar ridge were measured with CBCT (CBCT, New Tom, Italy) at 0.1 mm resolution. Alveolar crestal width was the distance between two crestal mid-points of buccal and lingual bony walls of the tooth to be pulled out of the socket. The crestal mid-point on bony wall was located on horizontal plane of CT image according to relative stable distance between reference points (cement enamel junctions or crown margins) of two adjacent teeth (Figures 1 and 2). Crestal height was the distance between mid-point of the link between cementoenamal junctions of two adjacent teeth around the lost tooth space and the alveolar ridge (Figures 3 and 4). Changes in the crestal width and height before and 8-week post-extraction were calculated by subtracting post-extraction value with pre-extraction value for further analysis. 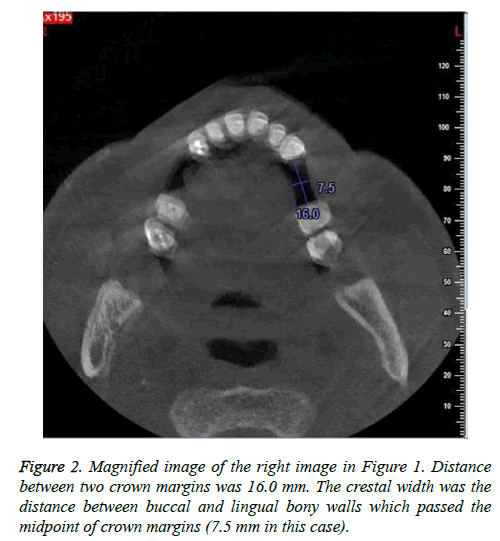 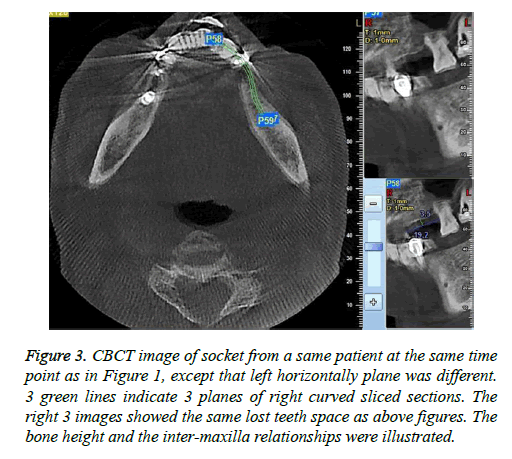 Figure 3: CBCT image of socket from a same patient at the same time point as in Figure 1, except that left horizontally plane was different. 3 green lines indicate 3 planes of right curved sliced sections. The right 3 images showed the same lost teeth space as above figures. The bone height and the inter-maxilla relationships were illustrated. 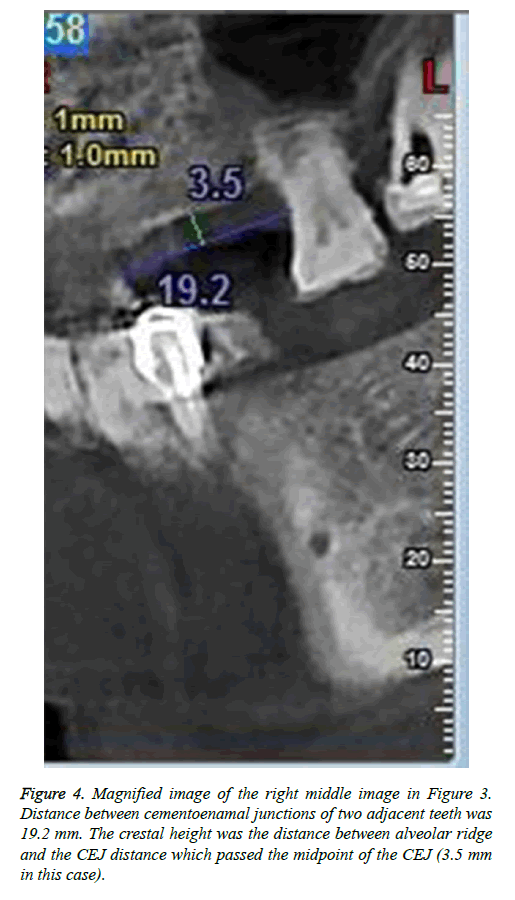 Figure 4: Magnified image of the right middle image in Figure 3. Distance between cementoenamal junctions of two adjacent teeth was 19.2 mm. The crestal height was the distance between alveolar ridge and the CEJ distance which passed the midpoint of the CEJ (3.5 mm in this case).

Mean local bone density (in Hounsfield units) was measured with CBCT and calculated by averaging values at 3 mm, 5 mm, and 7 mm under the crestal mid-points 8-weeks post-extraction. The points were located at the perpendicular line to alveolar ridge and in the center of the former extraction socket.

All statistical analysis was performed with SPSS 16.0 (SPSS 16.0 for windows, SPSS Inc., Chicago, IL, USA) software package. The differences of the mean values of each index among three groups were compared with Student t-test. A P value of less than 0.05 was considered as statistical significance. 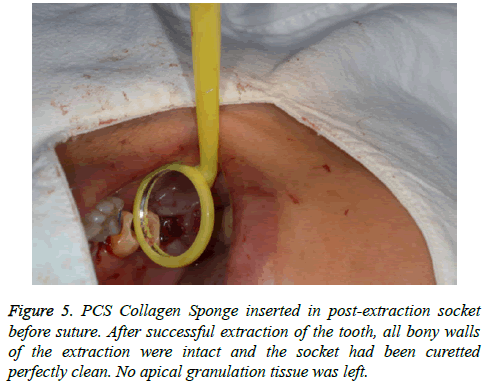 Figure 5: PCS Collagen Sponge inserted in post-extraction socket before suture. After successful extraction of the tooth, all bony walls of the extraction were intact and the socket had been curetted perfectly clean. No apical granulation tissue was left. 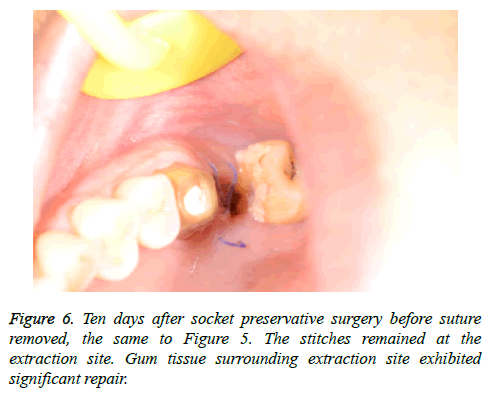 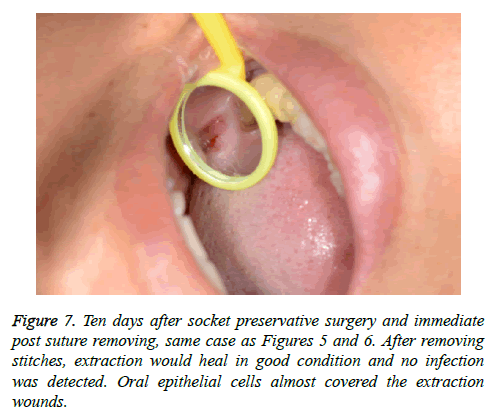 Subsequent implantations were performed in all sockets. The alveolar ridge condition before implantation was normal for all 29 sockets and after the elevation of the flap, and implants could be placed with adequate width and length. Bone graft was not mandatory during the implant placing for 6 sockets with or without socket preservation. For the remaining 5 sockets without preservation, 1-3 mm bone defect in the buccal or labial side was observed after implants placement, hence a slight quantity of bone graft with a small piece of resorbable membrane was covered.

Comparison of bone density at 8 weeks after extraction

Socket preservation after tooth extraction is detrimental for aesthetic and long-term stability of subsequent implantation or fixed restoration [3,11,12], which are in line with our current study in teeth as the dimensions of the alveolar ridge were greatly preserved both horizontally and vertically 8-week after tooth extraction.

The materials used in this study yielded excellent alveolar ridge preservative effect upon minimizing the reduction of dimensional changes, increasing bone density and facilitating implant surgery [13-15]. However, few studies indicated that granules may impede healing of extracted sockets because of difficulty in the absorption of tiny granules [16-18]. In the sockets treated with PCS, alveolar ridge dimensions were well preserved. Slight differences were observed between two types of materials both horizontally and vertically. Thus, collagen sponge yields satisfactory performance on bone formation. Lim JH and his colleagues [7] had applied collagen sponge to fill the intrabony cavity after cyst excision surgery and found the previous lesion was well healed and new bone formed at postoperative 3 years. Dimensional preservative effect of two types of collagen sponge did not significantly differ in terms of the absorption time and healing time, etc.

In terms of bone density, the effect of GBR was remarkably greater than those of the PCS or control groups, partly resulting from that GBR granule was not fullt absorbed at postoperative 8 weeks. Bone density of PCS group was significantly higher than that in the control group, whereas significantly less than that in the GBR group, probably because of the specific features of protein collagen sponge. Bone density indicated inappropriate but not hard feature for drilling during implant surgery, so it does not represent the disadvantages for clinical application.

The price for PCS protein collagen sponge is cheaper than that of GBR collage sponge, while cost of collagen sponge (25 mm × 50 mm) is 80 RMB, which is much less than of GBR combination. Considering the comparable effect, PCS protein collagen sponge could be an alternative for wide application of socket preservation after tooth extraction. The primary purpose of this study is to compare the effectiveness of GBR and PCS on socket preservation post tooth-extraction by selecting the parameters of crestal width and height of the alveolar ridge, etc. In the study design, the quantitative aspects are mainly emphasized to offer preliminary outcomes. Therefore, in next study, we’ll attempt to supplement qualitative data to complete the study design and enhance the quality of the research.

All authors declare that they have no conflict of interest. 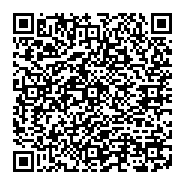