Purpose: In this study, the effect on heart, kidneys and liver organs in TNBS-induced Ulcerative colitis was investigated.

Conclusion: 50% TNBS could induce successfully the model of Ulcerative colitis. At the same time, 50% TNBS can also induce heart, kidneys and liver damage. In addition, these results indicate that the occurrence of chronic colitis may induce heart, liver, kidney damage.

Ulcerative colitis (UC) is chronic inflammatory bowel diseases (IBD), which affects the colon and is morphologically characterized by inflammation, epithelial damage and crypt erosions/ulcerations [1]. UC have evil change tendency which poses a serious threat to the patient [2]. It is one of the most serious diseases in the gastrointestinal tract crime [3]. Its incidence is the highest in Europe and North America [4]. In addition, UC has a rising trend in Asia and other regions [5]. At present, to create a model of UC by exogenous chemical stimulation-induced intestinal mucosal immune response is more common used methods. According to reports, 2,4,6- trinitrobenzenesulfonicacid (TNBS) was used to induce-UC model [6]. In that way, when TNBS cause damage to colon organ, which could cause heart, kidneys and liver organs damage. In this article, we investigated the effect on various organs in TNBS-induced Ulcerative colitis. The colitis was causing damage to other organs, which can provide a useful clinical basis.

Thin slices of colon, heart, spleen and liver tissue for all cases received in our histopathology unit were fixed in 4% formaldehyde solution (pH 7.0) for periods not exceeding 24 h. The tissues were processed routinely for paraffin embedding, and 5 μm-thick sections were cut and placed on glass slides. Tissue samples were stained with hematoxylin and eosin. A total of 20 sections in ablation region, each section randomly selected five fields at x400 magnification and photographed counting the number of cells.

Normal mice responded flexibly and had normal food intake. Model in BALB/c mice induced by 50% TNBS, which appeared bloody stools, loose stools, less moving, dull hair, body curled up and reduced food intake. The above symptoms were aggravated after 3 days, and then gradually stabilized. Mouse mortality was 50% in injection 50% TNBS. However, Mouse mortality was 100% injection 55% and 70% TNBS (Table 1).

Table 1: The mortality of mice on injection of TNBS.

Table 2: The change of weight.

Table 3: The changes of weight on heart, kidney and spleen.

There was significant difference between Figures 1A and 1B in the colon. It was red in the colon Figure 1B. However, body weight in model mice was reduced in the second weeks. 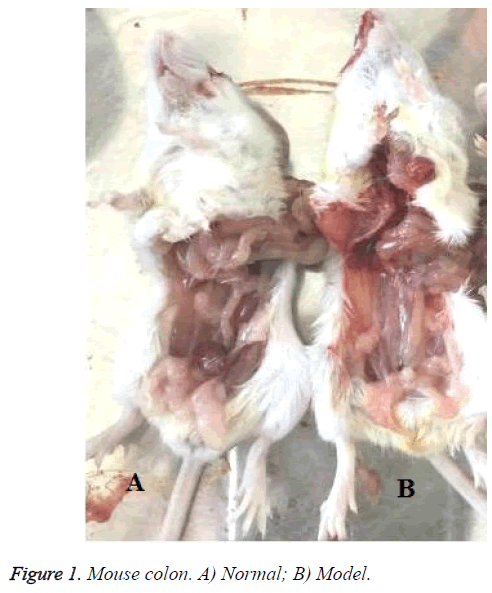 In the control group, there was no abnormality seen in the mucosa and ulceration or hyperplasia in the surface. Intestinal peristalsis was normal and moderate engorged degree. In the model group, there was interstitial lymphocyte in injection 50% TNBS. Colonic mucosa could see chronic inflammation. Glandular epithelial cells saw neutrophils and lymphocytes, plasma cells (Epithelial cells saw neutrophils, which was characterized by acute inflammation and injury. Plasma cells and lymphocytes were chronic inflammatory features). In addition, the blood vessel congestion could be seen in figure by injection 50% TNBS (Figure 2). 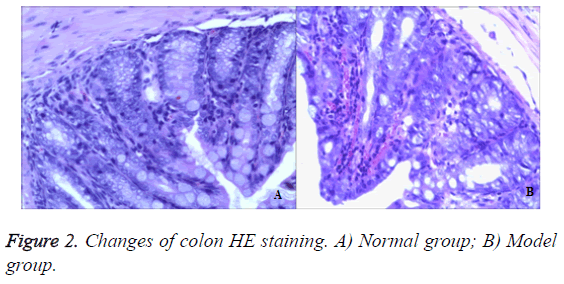 Figure 2: Changes of colon HE staining. A) Normal group; B) Model group.

In the normal mice, myocardial cells were neatly arranged, sarcomeres were arranged regularly, subcellular structure, such as mitochondrias, were rich, clustered and in normal morphology (Figures 3A and 3B). However, 50% TNBS induced ulcerative colitis which induced cardiomyocytes degeneration and focal inflammatory cell infiltration as well as interstitial connective tissues hyperplasia. 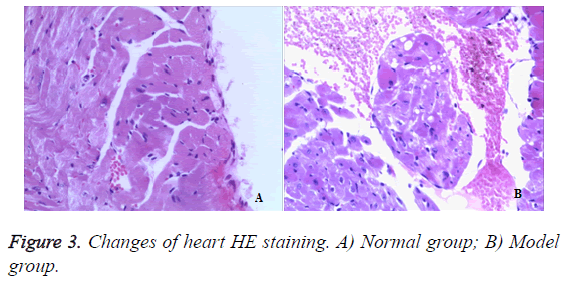 Figure 3: Changes of heart HE staining. A) Normal group; B) Model group.

In the control group, no obvious pathological changes were observed in the kidneys of mice. In the model group, mouse tubular epithelial cells had shedding and accompanied with edema. There was focal inflammatory cell infiltration, glomerular mesangial cell proliferation. Most of the glomerular basement membrane appeared thickening. It showed that the model group had significant renal lesion and the model was established successfully by injection 50% TNBS induced ulcerative colitis (Figure 4). 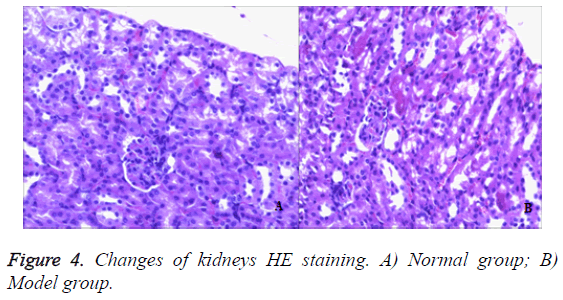 Figure 4: Changes of kidneys HE staining. A) Normal group; B) Model group.

To assess the effect of the different liver architecture, paraffin section prepared from the hepatic tissues of the different groups were stained with hematoxylin/eosin and examined. From the histological point of view, liver from rats in the healthy control group showed a normal liver lobular architecture and hepatocyte structure (Figures 5A and 5B). In contrast, 50% TNBS-induced ulcerative colitis resulted in histopathological lesions and extensive hepatocellular damage, as represented by the presence of portal inflammation, fatty change and venous congestion.

Figure 5: Changes of liver HE staining. A) Normal group; B) Model group.

Inflammatory bowel disease is quite common in Western countries [7]. Although the incidence in Asian countries is lower than in the West [8]. But it also showed an upward trend in recent 10 years. The domestic has been that the disease is rare and not enough attention in the past [9]. But according to reports have more than 2 million people in recent years, and new cases are constantly being discovered. IBD etiology and exact pathogenesis is unclear, the treatment is quite difficult. The ideal animal model is an indispensable tool for the study of pathology, etiology and related therapeutic drugs [10]. At present, TNBS-induced rat intestinal injury model has been widely used in the pathogenesis of various intestinal diseases [11]. TNBS is a weak organic acid, cannot induce immune response in the body alone [12]. In combination with the organization of protein and other high molecular substances can induce immune response. So when modelling the need for ethanol as intestinal mucosal barrier damage agent, making the TNBS and intestinal mucosal keratin combined into the whole antigen, thus stimulating the local immune response. TNBSinduced intestinal injury, which is typical of the occurrence of transmural necrosis on the colon and extensive inflammatory cell infiltration, and accompanied with a sustained decline in body weight [13]. In this study, mice were enemaed with 50% TNBS. From the experimental results showed that body weight of mice was continued to decline in 50% TNBS-induced model. Histopathological observation after modelling showed that the intestinal wall appeared necrosis and deep muscle layer, infiltration of inflammatory cells. These were typical inflammatory bowel disease characteristics, indicated that the method of preparation on inflammatory bowel disease model was successful. In addition, the heart, liver and kidney were also pathological changes. These results suggested that 50% TNBS-induced chronic colitis, which might lead to other organ damage. This model was of great significance for the future development of drugs.