The driving force of blood flow in Fontan circulation depends on pressure changes in the thoracic cavity due to respiration and the pump effects of the skeletal muscles, in addition to the systemic ventricular pump effect [1], although the latter is thought to be the chief driving force [2].

The single ventricular pump in Fontan circulation works not only to eject arterial blood into systemic circulation but also to suck the blood from the atrium into the systemic ventricle itself [3,4]. This sucking effect depends on the diastolic performance, especially active relaxation performance in the early diastole of the systemic ventricle. The present study aimed to investigate the relationship between ventricular relaxation performance and the blood flow profiles in the pulmonary veins (PVs) and arteries (PAs) and caval veins.

Consecutive patients with Fontan circulation who underwent magnetic resonance imaging (MRI) studies and cardiac catheterization studies for clinical reasons were analyzed as the Fontan group. The data of these patients were compared with those of patients who underwent repair for tetralogy of Fallot; this was the biventricular group. Patients with significant fenestration (more than 20% of cardiac output), veno-veno collateral vessels (more than 20% of cardiac output), arteriopulmonary collateral arteries (more than 25% of cardiac output), and/or significant atrio-ventricular valve regurgitation (more than 20% of regurgitation fraction) were excluded from the Fontan group. Additionally, patients with anomalous systemic venous anatomy with azygous continuation and absence of the inferior vena cava were excluded. In the case of double superior vena cava (SVC), venous flow was measured in the left and right SVCs and the sum was quantified as the SVC flow. Similarly, patients with tricuspid valve regurgitation or pulmonary valve regurgitation wherein the regurgitation fraction exceeded 30%, artificial atrio-ventricular valve, or obscure MRI scans were excluded from the biventricular group. The heart rhythm of all the patients in both groups was sinus rhythm.

Cine MRI was performed using a 1.5-T scanner. A conventional phase-contrast sequence (25 phases) was used in a double oblique plane perpendicular to the dominant flow direction in each targeted vessel using the phase-contrast cine MRI technique. If patients were cooperative, the data were sampled for a period of about 25 s with breath-holding. Data were sampled for a period of about 2–2.5 min to rule out any respiratory effects in case of free breathing. All MRI examinations were conducted without tracheal intubation or positive-pressure ventilation. Blood flow volume curves were drawn in the right upper and lower and left upper and lower PVs and SVC in both groups and in the left (LPA) and right (RPA) pulmonary arteries and extra-cardiac conduit or intraatrial lateral tunnel (conduit) in the Fontan group. The peak of the flow volume (ml/s) in the systolic (FV-S) and diastolic phases (FV-D) were measured in each vessel. The mean of FVS and FV-D in the upper and lower PVs was used as the FV-S and FV-D of the right and left PVs.

MRI was performed on 41 consecutive patients after Fontan compression. Finally, 33 patients who met the inclusion criteria were enrolled.

The data of these patients were compared to those of 7 patients who underwent repair for tetralogy of Fallot who comprised the biventricular group. Demographic and hemodynamic data are shown in Table 1.

Blood flow profiles in each vessel

The peaks of flow volume in each vessel are shown in Table 2. In approximately 85% patients, the FV-S to FV-D (FV-S/D) ratio in the right and left PVs was equal to or less than 1.0 (Figure 1).

Table 2: MRI and catheterization data of the Fontan and biventricular groups. 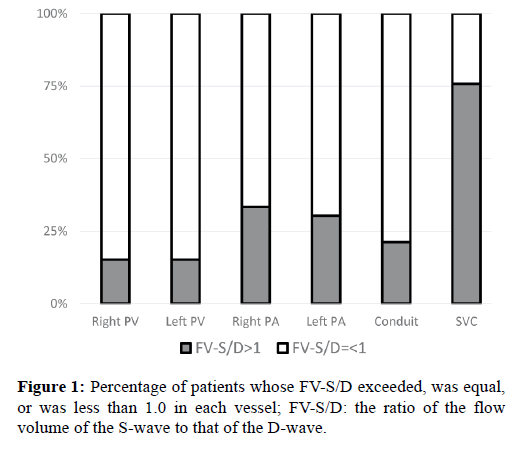 Figure 1: Percentage of patients whose FV-S/D exceeded, was equal, or was less than 1.0 in each vessel; FV-S/D: the ratio of the flow volume of the S-wave to that of the D-wave. 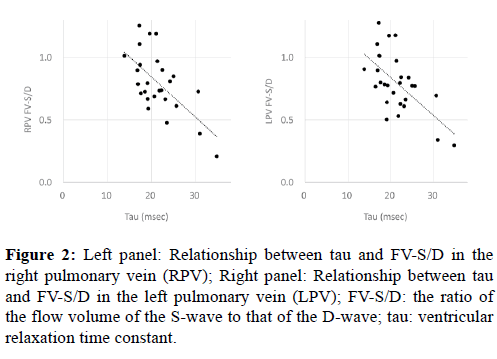 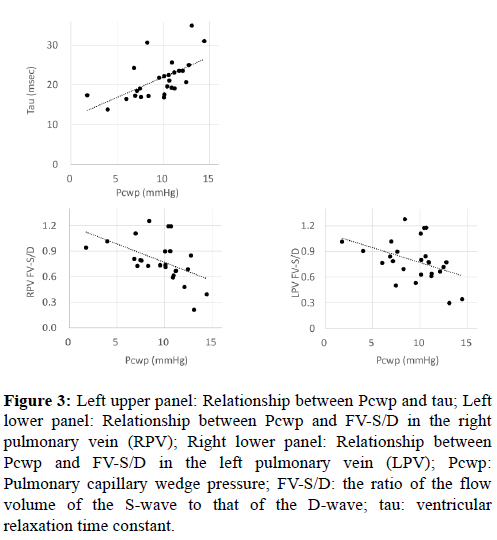 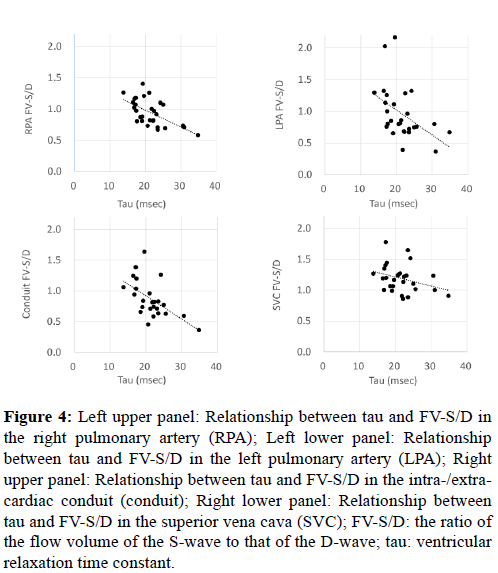 In contrast to the correlations in the PVs, PAs, and conduit, in approximately 75% of patients, the FV-S/D ratio in the SVC exceeded 1.0 (Figure 1). Moreover, although FV-S/D in the SVC and tau were negatively correlated (p=0.037, r=-0.33), the correlation coefficient was significantly lower than that for the PVs, PAs, or conduit (p<0.001; analysis of covariance).

Instead, there was a positive correlation between the ejection fraction of the ventricle and FV-S/D in the SVC (Figure 5; p=0.018, r=0.37). 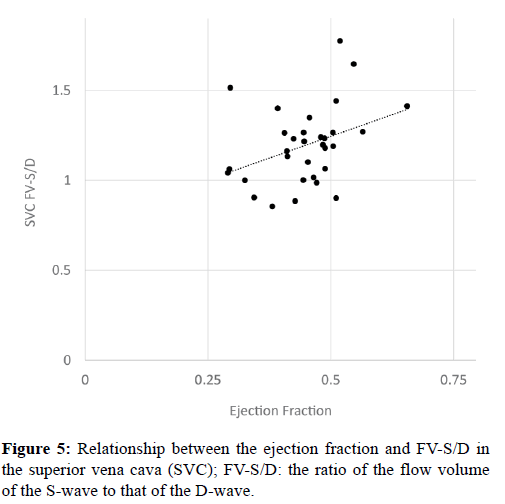 Figure 5: Relationship between the ejection fraction and FV-S/D in the superior vena cava (SVC); FV-S/D: the ratio of the flow volume of the S-wave to that of the D-wave.

On the contrary the driving force of the blood flow in the PAs or caval veins depends on not only the ventricular function but also the pressure changes due to respiration and the pump effect of the skeletal muscles [1]. Generally, elevated central venous pressure is observed in post-Fontan patients and is considered to be the cause of various complications. Therefore, understanding the flow profiles of the PAs and central veins may guide strategies to prevent these complications.

Flow profiles in the PVs

The S-wave in the Fontan group in this study comprised only the S1-wave and lacked the S2-wave, similar to what was found in the study by Shariat et al. [7]. Other studies of normal biventricular circulation using MRI or Doppler echocardiography reported that the peak flow velocity or peak flow volume of the S-wave is almost equal to or dominant over that of the D-wave [8,9]. In our study, as shown in Table 1 and Figure 1, FV-D tended to be dominant to FV-S in the Fontan group, a finding that agrees with that of previous reports [10].

We found a significant negative correlation between FV-S/D in the PVs and tau (Figure 2). Moreover, FV-S/D in the PVs and Pcwp were significantly negatively correlated and Pcwp and tau were significantly positively correlated (Figure 3). Reduction of the ventricular sucking effect is considered to induce an increase in atrial pressure, and this along with a reduction in atrial compliance promotes a decrease in FV-S and increase in FV-D. In normal biventricular circulation, an increased D-wave and decreased S/D ratio were observed in the initial stage of diastolic dysfunction, during which the value of tau was prolonged but the atrial pressure was not elevated [11]. In this initial stage of diastolic dysfunction, the blood flow induced by atrial kick (A-wave) is dominant over the early diastolic inflow (E-wave) in the trans-mitral flow (abnormal relaxation pattern). The ventricular inflow in Fontan circulation is reported to relatively shift to the latter portion of diastole with a large atrial contribution, which lowers the E/A ratio as a result [12,13]. Moreover, the isovolumic relaxation time or tau has been reported to be worse in post-Fontan patients than in patients with normal biventricular circulation [13,14]. The findings of the current study showed that the abnormal relaxation (prolonged tau) may directly cause elevation of atrial pressure in post-Fontan patients, although abnormal relaxation is thought to be the initial stage of diastolic dysfunction in patients with normal biventricular circulation. Thus, even minor abnormalities of ventricular relaxation may affect pulmonary and central venous circulation in post-Fontan patients.

Flow profile in the PAs and conduit

Flow profile in the SVC

A previous study reported that the driving force of blood flow in Fontan circulation depends not only on the ventricular pump effect but also the pressure change in the thoracic cavity due to respiration [18]. The effects of respiration were not considered in this study. However, the flow profile in the SVC was different from that in the other vessels despite all of them being in the same thoracic cavity. Therefore, we believe these differences in flow profiles indicate other effects than respiration.