Objective: Sulfur fumigation is used to preserve Rhizoma Dioscoreae (RD), a traditional medicinal herb, but excess consumption of SO2 residues may be toxic. We compared effects of sulfur-free versus sulfurfumigated RD concentrated aqueous extracts on rat blood biochemistry and organ morphology.

Rhizoma Dioscoreae (RD) is the dried rhizome of Dioscorea opposita Thunb. In Traditional Chinese Medicine (TCM), RD is widely prescribed for yang deficiency of spleen and kidney, to treat consumptive cough and dysentery, as an aid for digestion and gastric motility, and for restraining nocturnal emissions [1]. Fresh RD is prone to browning because of Polyphenol Oxidase (PPO) and Peroxidase (POD) oxidation [2,3], resulting in poor product appearance. In addition, RD is rich in mucus and difficult to dry, so sulfur fumigation is often used in processing. After sulfur fumigation, RD is bright white, fast drying, easy to shape, and less prone to mildew. Thus, sulfur fumigation greatly extends product shelf-life. However, massive use of sulfur fumigation can lead to excessive SO2 residues on the surface. Sulfur dioxide and its derivatives can enter the blood and damage the respiratory and cardiovascular systems [4,5]. Moreover, studies have shown that some active ingredients of Chinese herbal medicines are chemically altered after sulfur fumigation [6,7].

While sulfur fumigation is a nearly century-old processing method for Chinese herbal medicines, it safety has been widely questioned in recent years. Since there is currently no technology to completely replace sulfur fumigation, it remains the preferred processing method for most medicinal herb collectors to reduce economic losses caused by rot, mildew, and poor appearance. However, there are few studies on the safety of sulfur-fumigated RD. Therefore, we compared the effects of sulfur-fumigated versus sulfur-free RD aqueous extracts on routine blood parameters and tissue morphology in Sprague-Dawley rats.

Preparation of saturated-fumigated Rhizoma dioscoreae: Fresh Rhizoma dioscoreae samples were washed, peeled with a bamboo knife, cut into sections, and evenly placed in the fumigation chamber. An appropriate amount of sulfur was weighed, placed in a crucible, and ignited. The door was closed when a blue flame was formed, then sealed with a transparent plastic. After fumigation for 12 h, the exhaust fan was activated for 1 h. This fumigation processes was repeated 4 times (48 h total). The fumigated Rhizoma Dioscoreae was removed, cut into 2-3 mm slices, and then placed in an oven for low-temperature drying at 60°C.

Preparation of sulfur-free Rhizoma dioscoreae: Fresh Rhizoma dioscoreae samples were washed, peeled with a bamboo knife, cut into sections, then evenly placed in an oven for drying at 105°C for 1 h, followed by low-temperature drying at 60°C until semi-dry. Samples were removed, and cut into 2-3 mm slices, then placed in an oven for low-temperature drying at 60°C [8].

Thirty SD rats were adapted to the feeding schedule for 1 w prior to group allocation. The animals were then randomly divided into three groups of ten: a sulfur-fumigated RD group (20 g/kg) (According to the table of human and animal equivalent dose ratio based on the body surface area in the pharmacological experiments: the clinical dose was approximately 3.2 g/kg, converted into rat dose: rat dose=3.2 g/kg × 70 kg × 0.018/200=20 g/kg), sulfur-free RD group (20 g/kg), and control group. The control group received equivoluminal distilled water at 20 ml/kg by once-daily intragastric administration for 12 w. Rats were housed at five per cage with ad libitum access to water. Body weight and average food intake were recorded weekly. General health and behavior (e.g., coat condition, defecation, mental condition) were observed weekly.

Animals were fasted but allowed water ad libitum for 12 h after the last RD or water intragastric administration. Rats were weighed 24 h after final administration. Retro-orbital blood was sampled under anesthesia for routine cell counts and biochemical analysis using a MICROS 60 automatic three-classification blood analyzer and BS-380 automatic biochemical analyzer, respectively. Animals were then sacrificed by cervical dislocation and the abdominal cavity dissected immediately. The color and morphology of organs were evaluated by naked eye and recorded in detail. The heart, liver, spleen, lung, kidney, thymus, and duodenum were removed, rinsed with chilled (4°C) normal saline, blotted dry with filter paper, and then weighed for calculation of the organ coefficient. Organs were fixed in 100 g/L formaldehyde at 4°C for 24 h, followed by dehydration in graded ethanol, embedding, slicing, and HE staining. Pathological changes were observed under light microscopy.

Data are expressed as mean ± standard deviation (x̄ ± s). Microsoft Excel and SPSS19.0 software were used for analysis of variance. A p<0.05 is considered significant and p<0.01 as highly significant.

During the 90 d period of intragastric administration, all rats showed normal growth and development, and no major adverse reactions were observed. Coat remained glossy and stool shape was normal. No bloody purulent stool, diarrhea, or abnormal secretions for nose, eyes, and mouth were observed.

Average body weight did not differ among groups at any time during the 12 w of treatment (Figure 1). In all three groups, weight gain was regular over the first 6 w and more moderate thereafter. 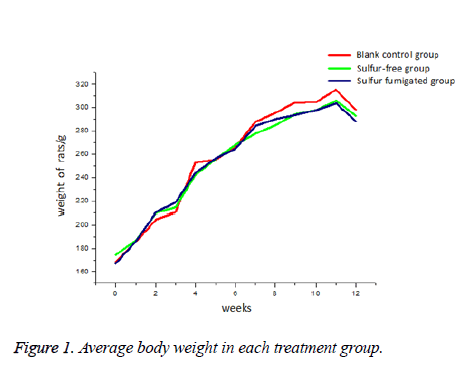 Compared to the control group, blood Alanine Aminotransferase (ALT), Aspartate Aminotransferase (AST), Total Protein (TP), Triglycerides (TG), Total Cholesterol (TC), and Glucose (GLU) were lower while Direct Bilirubin (DBIL) and Alkaline Phosphate (ALP) were higher in the sulfur-free group, and the differences were significant for the ALT, AST, and TC reductions (P<0.05), highly significant for the GLU decrease (P<0.01), and significant for the DBIL increase (P<0.05). These changes indicate that Rhizoma dioscoreae is beneficial for glycemic control and protection against liver damage. The levels of GLU and TC were also significantly lower in the sulfur-fumigated group compared to the control group (P<0.01). However, AST and ALT levels were significantly higher than the control group, suggesting that despite the aforementioned benefits on glucose control, the liver may be damaged by long-term consumption of SO2 and derivatives from sulfur-fumigated RD. Compared to the sulfur-free group, the levels of ALT and AST were significantly higher (P<0.01, Table 2) and ALP level significantly lower (P<0.01) in the sulfur-fumigated group.

Pathological sections were obtained from liver, lung, duodenum, spleen, kidney, heart, and thymus, and stained with Hematoxylin and Eosin (HE) (Figure 2). Microscopic examination revealed scattered focal hemorrhage in lung of one sulfur-fumigated group rat (panel B3 in Figure 2), punctate liver necrosis in one control group rat (panel A1), and slight liver steatosis in one sulfur-free group rat (A2). In contrast to these mild sporadic abnormalities, two sulfur-fumigated group rats exhibited multiple focal fatty infiltration in the duodenum muscle (C3) and four exhibited a large number of necrotic liver puncta (A3). No other pathological changes were found. 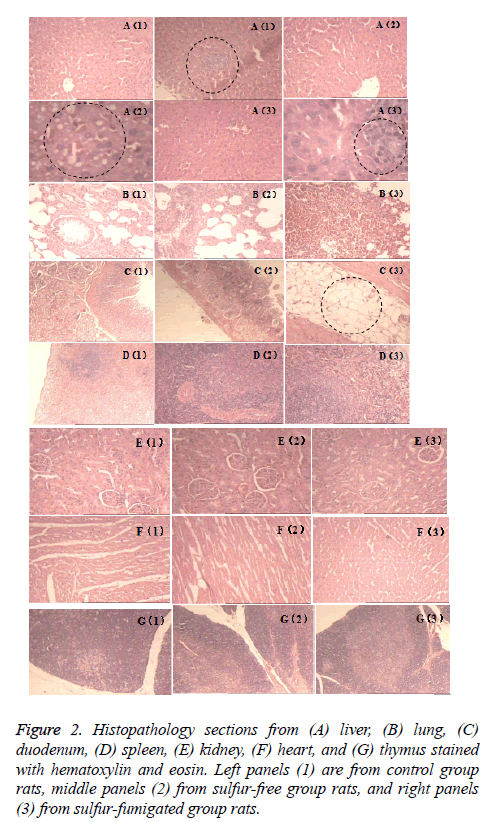 Rhizoma Dioscoreae is often processed by sulfur fumigation to preserve appearance and prevent mildew [10]. While this process greatly extends shelf-life, studies show that sulfur can alter the bioactivity of TCMs and change the chemical composition. Further, sulfur dioxide and its derivatives have damaging effects on many organs and tissues [11]. Therefore, it is necessary to study the potential of sulfur-fumigated RD to induce organ damage under controlled conditions. By directly comparing outcomes after long-term administration of sulfurfree and sulfur-fumigated RD, we present evidence for the deleterious effects of sulfur fumigation and highlight the need for a safer alternative preservation method.

Sulfur-fumigated RD had no substantial effect on body weight compared to the sulfur-free preparation. However, the control group was slightly heavier from 7 w on compared to both treatment groups (Figure 1). Rhizoma dioscoreae is used in TCM to promote digestion, gastrointestinal motility, and reduce body fat accumulation [12]. Thus, sulfur-fumigation appeared to have no marked effect on this purported benefit. Blood concentrations of ALT, AST, GLU, and TC were significantly lower in the sulfur-free group than the control group (P<0.05), suggesting that RD improves glucose metabolism and protects against liver damage, consistent with a previous report [13]. Blood glucose was even lower in the sulfur-fumigated group, again suggesting that benefits on glucose metabolism are not altered by this processing method. However, serum ALT and AST levels were significantly elevated, and this was accompanied by signs of liver necrosis in 40% of sulfur-fumigated group rats. Thus, long-term consumption of SO2 residues from sulfur-fumigated RD may induce liver damage. All measured organ coefficients were greater in the sulfur-fumigated group compared to the control group, and increases were significant for lung, thymus, spleen, and kidney (P<0.01). Elevated organ coefficient may arise from multi-organ edema and hypertrophy caused by subchronic toxicity. Conversely, higher thymus weight in the sulfur-free RD group may indicate enhanced immunity, although additional studies are required to assess this possibility.

According to the 2015 edition of "Chinese Pharmacopoeia", the conventional sulfur fumigation method is permitted for the processing of 11 TCMs, including Rhizoma dioscoreae, Achyranthis bidentatae Radix, and Puerariae thomsonii Radix, with sulfur dioxide residues not to exceed 400 mg/kg. Generally, sulfur dioxide content below 500 mg/kg is considered safe, but liver and kidney toxicity may still be possible with long-term consumption. We conclude that the disadvantages of traditional sulfur fumigation outweigh its advantages; therefore, it is necessary to develop a new technology for Rhizoma dioscoreae preservation to ensure both quality and safety.

This work was supported by the Natural Science Foundation of Jiangxi Province (Nos. 20142BAB205089).