Methods: Patients with and without nursing interventions were divided into two groups. The difference in baseline characteristics and overall survival (OS) were compared between groups and prognostic factors were explored. The specialized nursing interventions consisted of education regarding selfmonitoring and adverse events management.

Results: Out of 89 patients enrolled in this study, 46 patients (51.7%, Group 1) received nursing care and 43 patients (48.3%, Group 2) did not according to the treating departments, hepatobiliary surgery and radiologic intervention, respectively. The median OS of all patients was 21.0 months (95% CI=13.7-28.3). Multivariate analysis revealed that patients without nursing care (RR=2.374, P=0.032) and pre-treatment ECOG performance score (ECOG PS) 2 (RR=6.495, P=0.001) were independent significant predictors for worse prognosis in HCC patients on sorafenib therapy. In patients with ECOG PS less than 2, the median OS of patients in Group 1 was higher than those in group 2 (38.1 months vs. 16.1 months, P=0.01).

Primary liver cancer is one of the common malignant diseases in mainland China, especially in coastal area. It is a highly virulent malignancy often diagnosed at late stage with a resectable rate of less than 30% [1,2]. Sorafenib, a multikinase inhibitor with anti-proliferative, anti-angiogenic and pro-apoptotic properties, was approved for treatment of unresectable Hepatocellular Carcinoma (HCC) and advanced Renal Cell Carcinoma (RCC) [3-6]. However, the incidence rate of adverse events is high with the use of sorafenib and a dose reduction or temporary interruption is required for serious adverse events. It is suggested that early recognition and management of adverse events with adequate patient education and supportive measures could minimize the chance of dose reduction and interruption of sorafenib [7,8]. Based on this, we performed a retrospective analysis of two groups of HCC patients treated with sorafenib and explore the differences in adverse reaction experience and nursing care model.

The retrospective study aimed to explore the impact of the specialized nursing intervention on patients’ prognosis.

Patients with radiological confirmation plus serum alpha-fetoprotein (AFP) of >400 μg/L, or histologically confirmed HCC were eligible for this study. Other inclusion criteria included Eastern Cooperative Oncology Group performance scores (ECOG PS) of 0 to 2, Child-Pugh class A or B, and patients who have received sorafenib for more than three months. Exclusion criteria included patients with concurrent heart, brain and kidney diseases, and those who received sorafenib for less than 3 months or experienced serious adverse events which resulted in treatment discontinuation.

A total of 89 primary HCC patients who received oral sorafenib therapy were identified from July 2008 to August 2014. There were 83 male patients and 6 female patients, with a mean age of 54.7 years (range=37-73 years). Among them, 84 patients were hepatitis B virus carriers and 1 patient was hepatitis C virus carrier, and only 4 of them had serum marker-negative hepatitis.

All patients are divided into two groups according to the treating departments. Group 1 refers to hepatobiliary surgery outpatients followed by two nurses for specialized nursing intervention whereas Group 2 is a control group of radiology outpatients without nursing follow-up.

All HCC patients with advanced or recurrent disease after surgery were given oral sorafenib 400 mg twice daily. Patients who experienced grade 3 or above adverse drug reaction were managed by temporary reduction to half-dose or interruption until the adverse events were resolved to at least grade 2 and the treatment was resumed to original dose.

All patients were followed up once every four weeks which included laboratory tests of liver and renal function and serum AFP level, and radiological imaging such as ultrasound or computed tomography scan, magnetic resonance imaging, bone scan, positron emission tomography-computed tomography scan. Overall Survival (OS) was determined from the start of sorafenib therapy. Survival follow-up was censored at the time of death or on 30 November 2014. The median follow-up duration was 14.7 months (range=3.2-72.8 months).

Comparison of baseline characteristics between groups

Baseline characteristics of HCC patients who received for more than 3 months of sorafenib were compared and displayed in Table 1.

When compared to Group 2 (n=43), a significantly higher percentage of patients from Group 1 (n=46) received previous hepatic surgery including liver transplantation, hepatic resection and radiofrequency ablation therapy (73.9% vs. 34.9%, P<0.001) and more patients experienced diarrhoea during sorafenib therapy (56.5% vs. 27.9%, P=0.006). Other factors were statistically insignificant between groups.

The median OS survival time was 21.0 months (95% CI, 13.7-28.3 months), and the 1-year, 2-year and 3-year survival rates were 87.2%, 75.3% and 35.2% respectively. Estimates of cumulative OS by Kaplan-Meier analysis and compared using log-rank tests showed that ECOG PS 2, Child-Pugh class B, serum AFP level of more than 400 μg/L, absence of prior hepatic surgery and absence of specialized nursing interventions were significantly associated with poor survival outcomes of primary HCC patients receiving sorafenib as shown in Table 2. Further Cox-regression analysis demonstrated that ECOG PS 2 (HR=6.495, 95% CI=2.249-18.756; P=0.001) and patients without specialized nursing interventions (HR=2.374, 95% CI=1.078-5.229; P=0.032) were independent risk factor of survival among these patients as shown in Table 2. 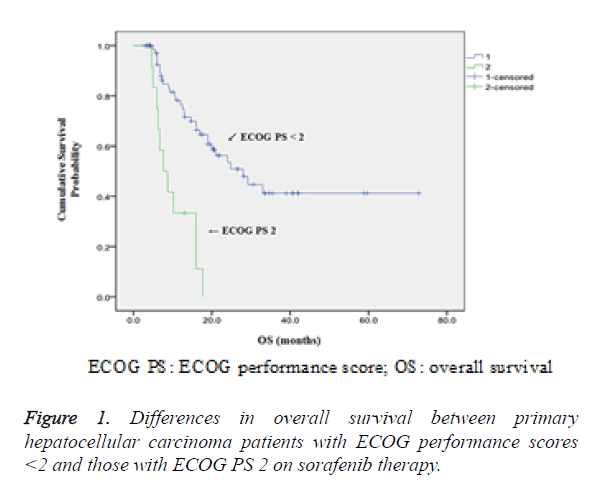 Figure 1. Differences in overall survival between primary hepatocellular carcinoma patients with ECOG performance scores <2 and those with ECOG PS 2 on sorafenib therapy. 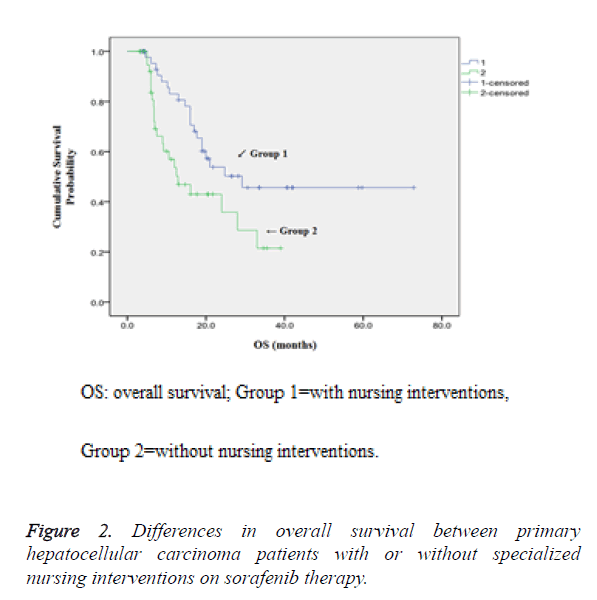 Figure 2. Differences in overall survival between primary hepatocellular carcinoma patients with or without specialized nursing interventions on sorafenib therapy.

Table 3. Comparison of median overall survival time in patients on sorafenib therapy according to pre-treatment ECOG PS and nursing interventions. 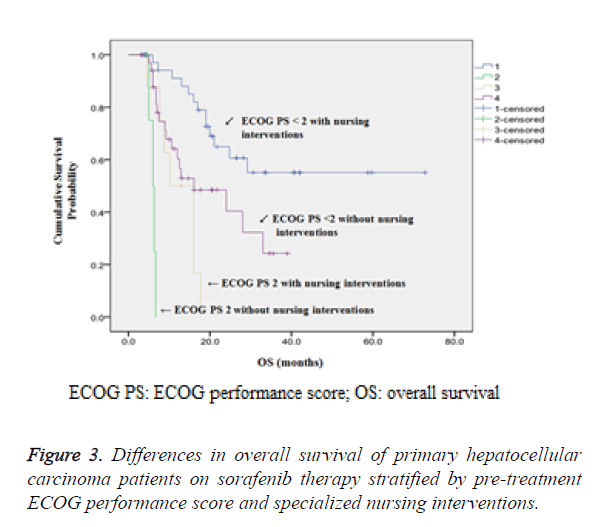 Currently, HCC treatment mainly involves surgical resection, radiofrequency ablation therapy and Transarterial Chemoembolization (TACE) depending on liver function and tumour burden of patients [9-11], but a number of patients still suffer from disease progression after treatment. The prognosis of eastern patients is even worse than patients from western counterparts such as North America and Europe [12-14].

Therefore, there is a definite unmet need for better treatment of HCC. Sorafenib, a multikinase inhibitor which inhibits Raf-1 or B-Raf kinase and targets vascular endothelial growth factor receptor-2/-3 (VEGFR-2/-3) and platelet derived growth factor receptor-beta (PDGFR-β) to block tumour cell proliferation and angiogenesis [4,15,16], was the first molecular targeted therapy to conclusively demonstrate significant improvement in OS of advanced HCC patients [3,5] and becomes the standard first-line systemic treatment [17]. In our study, we demonstrated a median OS time of 21.0 months (95% CI=13.7-28.3 months) in advanced HCC patients treated with sorafenib whereas the median OS was about 10.7 months in advanced HCC patients without prior systemic treatment from the SHAPR trial [3,18].

In our study, it is observed that pre-treatment ECOG PS of less than 2 and nursing intervention were independent predictors of good prognosis in advanced HCC patients treated with sorafenib. Eastern Cooperative Oncology Group (ECOG) developed a performance Score (PS), namely ECOG PS, is a simple measurement for quantifying patients’ general well-being and activities of daily life to assess their tolerance to cancer treatment [19]. ECOG PS, which runs from 0-5 with 0 denoting perfect performance status and 5 as death, is mainly used for assessment of performance status before chemotherapy, and patients with PS of 3 or above are not recommended for chemotherapy [19]. Luo et al. [20] validated the use of EORTC QLQ-C15-PAL questionnaire in terminal cancer patients and confirmed that patients with higher ECOG PS had more severe symptoms and worse quality of life. Sorafenib is a systemic treatment which is also associated with patients’ physical conditions. Our study excluded patients with ECOG PS ≥ 3 and demonstrated that a patient with the PS 2 is an independent predictive factor of poor prognosis.

During the nursing intervention, we noticed that patients who received surgical treatment should start sorafenib after wound healing. In our study, one patient had fat liquefaction at the incision site after hepatic resection and redness and swelling were observed at the incision site during sorafenib treatment. After stopping sorafenib for 5 days, the symptoms subsided and wound was closed and healed with two sutures. In HCC patients treated with TACE, those who experienced fever and skin flushing due to tumour necrosis after TACE should delay sorafenib therapy until the skin recovers and returns to normal. We also suggested that patients’ quality of life should be taken into consideration in addition to treatment efficacy. It sounds reasonable for dose reduction when patients experience grade 3 or above adverse events and dose interruption when necessary. From our study, temporary dose reduction or discontinuation was not correlated with disease prognosis.

Our study is however limited by the following three areas. First, our patients were recruited from two treatment out-patient departments and grouping was not performed by random assignment. Therefore, selection bias may exist in our study population. Second, the staging of disease was based on AJCC TNM classification in this study, but other prognostic factors such as portal vein invasion should also be taken into account in addition to the presence of distant metastasis. Nevertheless, we observed that the incidence of portal vein invasion was not statistically different between Group 1 and Group 2 patients (13.0% vs. 25.6%, P=0.133). Group 1 and 2 patients with portal vein invasion were further compared for median OS and again no statistical significance was observed, albeit a longer median OS was noted in Group 1 patients (10.2 months vs. 6.0 months, P=0.412), which deserves further investigation. Third, since this is a single-centre retrospective study with small sample size, further studies are required to unveil the true benefit of nursing interventions.

In conclusion, this preliminary study suggested that specialized nursing interventions could improve the prognosis of HCC patients treated with sorafenib therapy even though for patients with pre-treatment ECOG PS less than 2. It is therefore important to provide adequate nursing care to HCC patients during sorafenib therapy.