Pathological changes in the structure and function of Vascular Endothelial Cells (VECs) play an important role in Atherosclerosis (AS). Oxidized Low Density Lipoprotein (Ox- LDL) can cause secretion of surface adhesion molecules, pro-inflammatory cytokines and other inflammatory mediators by VECs, leading to vascular inflammation [1,2]. IL-8 acts as a regulator of immune and inflammatory response. It is secreted by endothelial cells, peripheral blood mononuclear cells and Vascular Smooth Muscle Cells (VSMCs), all of which are involved in the formation of AS [3]. IL-8 is believed to mediate the development of AS. Sodium Ferulate (SF) can reduce lipid peroxidation and clear free radicals from the body, so SF is now used to prevent and delay AS [4-7].

Frozen HUVECs were resuscitated, placed in DMEM medium containing 10% fetal bovine serum and cultured at 37°C in a 5% CO2 humidified incubator. The culture medium was replaced every 2-3 days. After the monolayer of cells reached confluence, 0.25% trypsin was added to digest the cells. Logphase cells were harvested for further experiment.

Total RNA extraction and identification: Total RNA extraction was performed by using Trizol reagent. RNA purity was assessed with an ultraviolet spectrophotometer, and its integrity by RNA gel electrophoresis using formaldehyde to keep RNA denatured. Fluorescence labelling of RNA sample: Using total RNA as initial template and T7 Oligo (dT) Primer (containing T7 promoter sequence), the synthesis of 1st-strand cDNA was started in the presence of CBC script. RNase H was used for the specific fragmentation of RNA, followed by addition of DNA polymerase and extension using RNA as primer. Then 2nd-strand cDNA was synthesized and double-stranded cDNA was purified. Using the synthesized cDNA as template, T7 Enzyme Mix was used to obtain cRNA, which was further purified using RNA Clean-up Kit. Reverse transcription was conducted using 2 μg cRNA, CBC Script II and random primer, and the products were purified with PCR NucleoSpin Extract II Kit. For the products of reverse transcription, Klenow fragment was used in fluorescence labelling reaction in the presence of random primer. During the extension of the complementary strands of DNA, Cy5-dCTP and Cy3-dCTP were added as the labelling reagents. The labelled products were purified with PCR NucleoSpin Extract II Kit and vacuum dried. Microarray hybridization and washing: Labelled DNA was dissolved in 80 μl hybridization buffer (3X SSC, 0.2% SDS, 5X Denhart’s, 25% formamide) and left at 42°C overnight. Hybridized DNA was first washed at 42°C in the buffer containing 0.2% SDS and 2X SSC for 5 min, then at room temperature in 0.2 × SSC for 5 min. The slide was dried and scanned. Microarray scan: Microarray images were extracted by LuxScan 3.0 software, which converted the images into digital signals. The data were normalized with Lowess method. Clustering analysis was conducted with Cluster3.0 software over the microarray data. CapitalBio Molecule Annotation System V 4.0 (MAS) was used to extract and analyse biological molecule relationships. Abnormal up-regulated and down-regulated genes were defined by the following threshold respectively: Ratio ≥ 2.0 and Ratio ≤ 0.5.

Using 1 μl of the synthesized cDNA as template, the PCR reaction system consisted of 2X Buffer 10 μl, 20X EvaGreen dye 0.6μl, Taq polymerase 0.3 μl (5 Unit), double-distilled water 6.9 μl, 10 μmol/L upstream and downstream primer 0.6 μl each. PCR procedures were as follows: predenaturation at 95°C for 5 min, denaturation at 95°C for 15 s, annealing at 50°C for 15 s, extension at 72°C for 20 s, fluorescence detection at 76°C for 3 s, for 40 cycles. Upstream primer of IL-8 was 5’-CATACTCCAAACCTTTCCACC-3’, and the downstream primer was 5’- AAACTTCTCCACAACCCTCTG-3’. The length of the amplified fragment was 112 bp. PCR products were analysed by 1.5% non-denaturing agarose gel electrophoresis. The hybridized microarray was scanned with a LuxScan 10 KA two-stand laser scanner.

Results were reported as mean ± standard deviation. The mean values among groups were statistically compared by using ttest. p<0.05 was considered as a level of statistical significance. 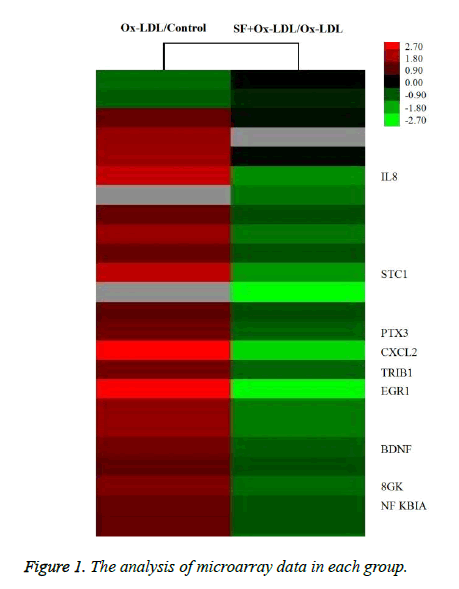 Figure 1: The analysis of microarray data in each group. 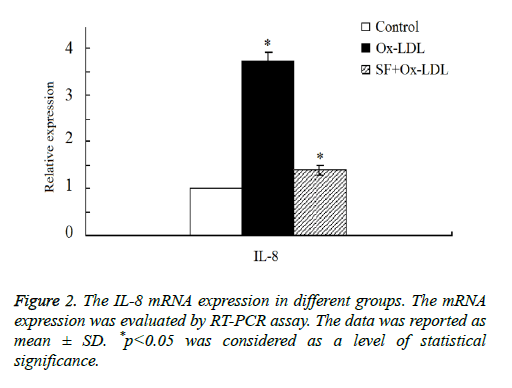 Figure 2: The IL-8 mRNA expression in different groups. The mRNA expression was evaluated by RT-PCR assay. The data was reported as mean ± SD. *p<0.05 was considered as a level of statistical significance.

As indicated in Figure 3 by both Western and ELISA assay the expression of IL-8 protein was significantly increased in Ox- LDL group compared with the control group. And when treated with SF, the expression of IL-8 protein in the SF+Ox- LDL group decreased significantly to normal level compared to control group, which consistent with the microarray analysis and RT-PCR assay. Thus the Ox-LDL-induced IL-8 up-regulation could be inhibited by SF. 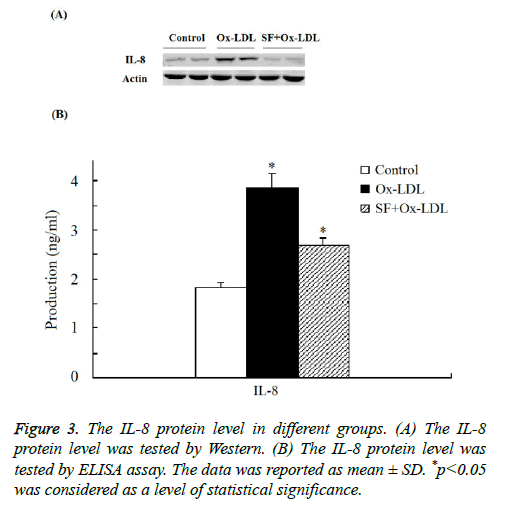 AS is a common pathological condition for many cardiovascular diseases and mainly associated with endothelial dysfunction [8]. Abnormalities of VECs usually manifest as a weakening of anti-coagulation, anti-oxidant and anti-adhesion functions. Ox-LDL is one important reason behind VEC damage and the induced expressions of pro-inflammatory cytokines by VECs [9]. According to clinical trials, IL-8 is usually up-regulated for patients with coronary heart disease [10]. In animal experiments, IL-8 is also up-regulated in the plasma and the lesion sites [11].

IL-8 exerts a chemotactic effect on neutrophils and T-lymphocytes. IL-8 is similar to IL-1β, IL-6 and TNF-α in that it can activate the neutrophils and mediate inflammatory response and other pathological processes. It has been found that IL-8 promotes the adhesion of monocytes to endothelial cells and the invasion of the vascular wall, triggering the inflammatory response of the vascular wall. The adhesion between monocytes and endothelial cells further induces the activation of these two cells, leading to the secretion of IL-8 in the absence of other stimuli [12].

Studies showed that Ox-LDL significantly up-regulated IL-8 mRNA and protein expressions. However, the mechanism of anti-atherogenic effect of SF is generally unknown [13]. In the present study we found that SF inhibited the activity of Ox- LDL and down-regulated mRNA expression of IL-8, thereby reducing the secretion of IL-8 and the inflammatory response.

The work was supported by National Nature Science Foundation of China (U1404827) and Key Science and Technology Program of Henan Province.