Effect of SIRT6 on the proliferation of colorectal cancer cells

In 2007, the third session of the Roche tumor forum reported that the incidence of colorectal cancer is increasing, and it ranked third overall among the causes of death from cancer [1]. Recent data have shown that the incidence of colorectal cancer in China ranks fourth among all malignant tumors, especially in cities with more rapid economic development. This includes Shanghai, which has ranked third overall with an annual incidence of 40 in 100,000. This is close to the incidence in developed countries in the West [2]. If colorectal cancer could be detected earlier, this would undoubtedly improve patients’ quality of life and prolong survival. Thus, exploring the pathogenesis of colorectal cancer is one of the important measures for preventing and treating colorectal cancer. The sirtuin family (SIRT1-SIRT7) extends the life of the organism mainly through the improvement of cellular physiology, including cell differentiation and survival, DNA recombination and repair, mitosis, and metabolism [3]. In cardiovascular, nervous system, and urinary system diseases, a variety of tumor-related diseases play important roles [4,5]. SIRT6 is a type of longevity factor and a member of the of the Sirtuin family. It regulates aging and other organs [6]. Furthermore, the aging process is the result of damage to cells, tissues, and organ function over time, causing organ systems to fail. A multicenter study published in Cell confirmed that the lack of SIRT6 enzyme can not only cause rapid tumorigenesis, but it also causes to abnormal glycolytic pathway function, which may also promote the formation of tumors [7,8]. One study of a liver cancer model in knockout mice confirmed the inhibitory relationship between SIRT6 and liver cancer, indicating that SIRT6 may act as a tumor suppressor and it plays a role in the gastrointestinal cancer [9-11]. Thus, we investigated SIRT6 and aimed to find a new pathogenetic mechanism underpinning colorectal cancer and its complex gene regulation network to provide insight into how to better diagnose and treat colorectal cancer.

The colorectal cancer cell line LOVO was obtained from the Shanghai Cell Bank of the Chinese Academy of Medical Sciences, China. SW620, SW480, LS-174T, HCT-8, and HCT-116 cell lines were from the Shanghai Life Science Research Institute of the Chinese Academy of Sciences, China. Cells were cultured in RPMI 1640 medium and maintained in an incubator with saturated humidity and 5% CO2 at 37°C. The medium was changed every 1 or 2 days. When cells entered logarithmic growth phase, they were prepared for use.

Total RNA from colorectal cancer cell lines and the tissue samples was extracted using Trizol reagent according to the manufacturer’s instruction. After incubation, Trizol was added to the homogenized samples, followed by 0.2 ml of chloroform. Samples were shaken and then centrifuged at high speed for 15 min. The resulting two-layered mixture contained the upper RNA layer, and accounted for about 40% of the tube volume. The quantity of total RNA was determined using UV absorption measurements, and the purity was determined using agarose gel electrophoresis. After that, cDNAs were synthesized using the total RNA as templates for quantitative real-time PCR. The expression of SIRT6 mRNA was determined by quantitative real-time PCR and calculated using the formula RQ=2-CT. The U6 gene served as an internal control. All experiments were performed in triplicate.

Using the CDS sequence, specific primers for SIRT6 were designed using Primer Premier 5 software and the GeneAmp PCR System 2400 (ShangHai Ruigene Bio-pharm Technology Company). SIRT6 was amplified by PCR using the GeneAmp PCR System 2400 and separated by agarose gel electrophoresis. Target bands were recycled for double restriction enzyme digestion and ligated into a carrier vector. The vector was then transformed into competent bacteria and maintained in a 37°C incubator. Positive clones were picked for gene sequencing. After BLAST alignments, only the sequences obtained matched the original sequence with 100% identity, and were used for subsequent experiments.

Culture medium containing SW620 or LOVO cells was placed into 15 ml conical tubes, and 2 ml PBS was used to wash the side of the tube. Next, 0.5 ml of 0.25% trypsin without EDTA was added and incubated with 0.5 ml of the pipetted cell suspension (approximately 5 × 105 cells). This was gently added to a new centrifuge tube along with 1.25 μl Annexin VFITC. This was incubated at room temperature (18-24°C) in the dark for 15 minutes. Samples were centrifuged at 1000X g at room temperature for 5 min, and then 0.5 ml pre-chilled 1X binding buffer was added to the cells to facilitate gentle resuspension. Finally, 10 μl propidium iodide was added and the samples were immediately examined for apoptosis by flow cytometry.

SW620 and LOVO colon cancer cells (1 × 106 cells each) were collected 48 h after transfection with the SIRT6 vector. Briefly, cells were washed twice with PBS after centrifugation, and pre-cooled ethanol was added to at a concentration of 70%. This was followed by fixation at 4°C overnight. The cells were then washed once with 1 ml of PBS, and then 500 μl of PI solution (50 μg/ml Propidium Bromide [PI], 100 μg/ml RNase A, 0.2% Triton X-100) was added at 4°C for 30 minutes and protected from light. This was subsequently analysed for cell cycle dynamics using flow cytometry.

The differences in the expression of SIRT6 mRNA between colorectal cancer tissues, the adjacent tissues, and the polyp tissues were analysed using a relative quantitative method. All data were processed using SPSS v19.0 statistical software. Data were shown as the means ± Standard Deviation (SD), and compared using the Wilcoxon rank test. P<0.05 was considered to be statistically significant. 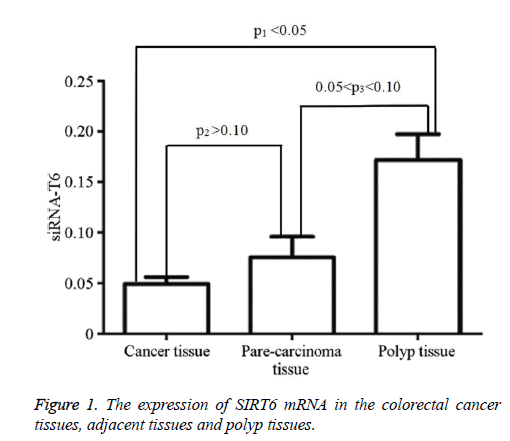 Figure 1: The expression of SIRT6 mRNA in the colorectal cancer tissues, adjacent tissues and polyp tissues.

Table 1. The expression of SIRT6 mRNA in colorectal cancer cell lines and tissues.

Effect of the SIRT6 gene on cell proliferation

Table 2. Cell proliferation rate of SW620 and LOVO transfected with or without SIRT6 gene.

Effect of the SIRT6 gene on inhibition rate

Compared to cells that did not undergo transfection, we found that transfection with SIRT6 had a significantly inhibitory effect on the growth of both SW620 cells and LOVO cells. This was especially true for the growth of LOVO cells, which increased in a time-dependent manner (Table 3). The inhibition rate was calculated as (1-OD of the experimental group/OD value in the control group) × 100% (the same time).

Table 3. Inhibition rate of SW620 and LOVO transfected with or without SIRT6 gene.

Note: After the transfection with SIRT6 gene, the apoptosis index of SW620 cell increased from 5.71 to 13.19, while that of LOVO cell did not increase significantly.

Table 4. The apoptosis index of SW620 and LOVO cells.

The cell cycles of SW620 and LOVO cells

Transfection with SIRT6 resulted in LOVO cells remaining in the G1 and S phases. In SW620 cell, it instead reduced the S and G2 phases, but did not influence the cells in the G1 phase (Table 5).

Table 5. Cell cycles of SW620 and LOVO cells with and without transfection with SIRT6 gene.

SIRT6 is a member of the Sirtuin family, which is a class of proteins that are highly evolutionarily conserved from simple bacteria to eukaryotes. They are considered to be “longevity genes” [9]. In higher animals, the Sirtuin family includes seven members: SIRT1-SIRT7 [10,11]. Among these, SIRT1, -6, and -7 are mainly expressed in the nuclei. SIRT2 is expressed in both the nuclei and the cytoplasm. SIRT3, -4, and -5 are mainly expressed in the mitochondria [12]. The human SIRT6 gene is located on chromosome 19 (19pl3.3), and it expresses and transmits its functions by encoding the protein. The molecular weight of the SIRT6-encoded protein is 39.1 kDa, and it has a pI of 9.12 [13]. However, in eukaryotes, the cytoplasm also contains a small amount of genetic material from the chromosomes, which can participate in nuclear functions [14]. As a result, SIRT6 is also expressed at low levels in the cytoplasm.

SIRT6 is a chromosome-associated protein necessary for Basic Excision Repair (BER) of damaged DNA and the maintenance of gene stability [15]. Thus, it plays important roles in DNA damage and repair, telomerase function, and cellular metabolic processes [16-18]. The loss of SIRT6 causes the excision of gene segments and other chromosomal aberrations [19], as well as an increase in the susceptibility to pathogenic and carcinogenic factors. Studies have found that SIRT6 can participate in the regulation of glucose metabolism in vivo. It can interfere with glucose absorption and glycolysis by inhibiting growth factors and Hif1 [20,21].

The expression of SIRT6 in colorectal cancer has seldom been reported. Currently, studies of SIRT6 mainly focus on aging and genital gland embryonic tumors. It has been shown that SIRT6 also has NAD+-dependent deacetylase activity and can regulate the stability of chromosomes [22-24]. It substrate is H3K9 and H3K56. In rats, the lack of SIRT6 can shorten life and cause premature aging symptoms [25]. In humans, mutations in SIRT6 and uncoupling protein 5 are associated with the formation of carotid artery atherosclerosis plaques. SIRT6 can positively regulate the expression of tumor necrosis factors after transcription, and it participates in acute or chronic inflammation [26].

Overexpression of SIRT6 can cause apoptosis in a wide variety of tumor cells. It inhibits the glycolysis pathway and interrupts the energy supply chain for tumor cells. Thus, tumor cells become apoptotic due to the lack of energy reserves. However, in this study, we found that SIRT6 plays different inhibitory roles in different kinds of colorectal cancer cells, suggesting that its effects are multifaceted and its regulatory mechanism is complex. Studies have reported that a reduction in energy intake, such as a 25% reduction in the total calorie consumption, can reduce the expression of SIRT6. SIRT6 enzyme can also promote the secretion of Tumor Necrosis Factor alpha (TNF-α) and enhance apoptosis in tumor cells. SIRT6 is not only an important regulator of mammalian lifespan and a known modulator of cellular glucose metabolism. It is also a very important tumor suppressor. These findings may help develop treatments that directly target cell metabolism, which may help to suppress the growth of tumors. In fact, SIRT6 inhibits the growth of tumor cells during antiaging processes, regulates metabolism, and promotes apoptosis. There is a clear relationship amongst these functions.