Silybum marianum (Cardus marianus), commonly known as milk thistle or St. Mary thistle or deve dikeni (Turkish), is one of the oldest and thoroughly researched plants in the treatment of liver diseases [1]. The active constituent of milk thistle is silymarin, a mixture of flavonolignans comprised of 4 isomers: silibinin, isosilibinin, silichristin, and silidianin. Most supplements are standardized according to their silibinin (often called silybin) content, the main component of the silymarin [2]. Silymarin/silybin has being currently used for the treatment of cirrhosis, chronic hepatitis and liver diseases associated with alcohol consumption and environmental toxin exposure [3]. In the United States, milk thistle is commonly used to treat viral infections and cirrhosis of the liver [4] and the most frequently sold herbal products [2]. Phitoterapy or herbal medicine has also been used for several centuries in eastern cultures [5]. Silybum marianum was cited in 17th century in a medical dictionary written in Ottoman Turkish [6].

Isparta, a city in the mediterranean region of Turkey, is rich in herbal plants [7] including Silybum marianum used for herbal medicine. Therefore, we aimed to test hepatoprotective effect of Silybum marianum, grown from this region, on CCl4 induced liver damage in rats.

Adult Male Wistar albino rats weighing about 200–250 g were used in the present study. All animal fed with standard laboratory feed and water ad libitum. All experiments were carried out according to the guidelines for the care and use of experimental animals, and approved by the Animals Ethical Committee of Süleyman Demirel University (Number: 27.07. 2010- 01).

Saline and infusions were daily given by gavage with the amount of 4 ml. Infusions were given daily for 5 consecutive days. Two hours after the infusion treatments, 50% CCl4 (2 ml/kg of bw) was administered intraperitoneally on days 2 and 3 [9,10]. End of the 5th day, the rats were decapitated under anesthesia (Ketamine 90 mg/kg + Xylazine 10 mg/kg). The bloods were drawn from abdominal aorta for biochemical tests. Liver was taken for histopathologic investigation.

The liver tissues specimens taken from the rats were fixed in Buffered Neutral Formalin 10%. The liver tissues were blocked in paraffin, sectioned at 5 - 10 microns thickness with a microtome and stained with Hematoxylin-Eosin; Microscopic images were taken with Olympus BX51 light microscope and captured digitally with Olympus DP2- BSW imaging program. The histopathological scoring of liver sections was modified from French et al. [11] as follows: 0 = no visible change/damage or; 1= mild change/damage (<25% of tissue); 2 = moderate change/damage (<25–50% of the tissue); 3 = extensive or global change/damage. The morphology of any lesions observed was interpreted according to Geller et al. [12]. Different cellular, vascular and morphological changes were evaluated. These parameters were included: sinusoidal or central ven dilatation and congestion, enlargement and inflammation of periportal area, proliferation of bile duct or Kuppfer cells, degeneration, pleomorphism and steatosis of liver cells and picnotic hepatocyte nuclei. The histopathological examinations were blinded to the study treatments.

Statistical analyses were performed using the SPSS for Windows Version 9.05 program. Biochemical results were reported as mean ± standart deviation (SD) and histopathologic results were given as median (min-max). The pairwise comparisons were conducted using the “Mann- Whitney U” test. The significance level was accepted as p<0.05.

As seen in Table 1, all liver function tests were elevated by of CCl4 administration and reduced by Silybum marianum treatment. Amoung these reductions of the tests, only AST were significant (p<.05) and dose dependent manner.

Although statistically insignificant, glucose and uric acid levels increased due to CCl4 intoxication and treatment of Silybum marianum caused to decrease (Table 2). Albumin caused to be decreased by CCl4 administration and increased by low dose Silybum marianum (p<0.05). CCl4 did not affect kidney func tion tests (urea and creatinine).

Table 2: Some biochemical paramenters of the groups (Mean ± SD).

Total cholesterol level was found to be significantly lowered by CCl4 intoxication. Silybum marianum caused to slightly increase though this was not significant. 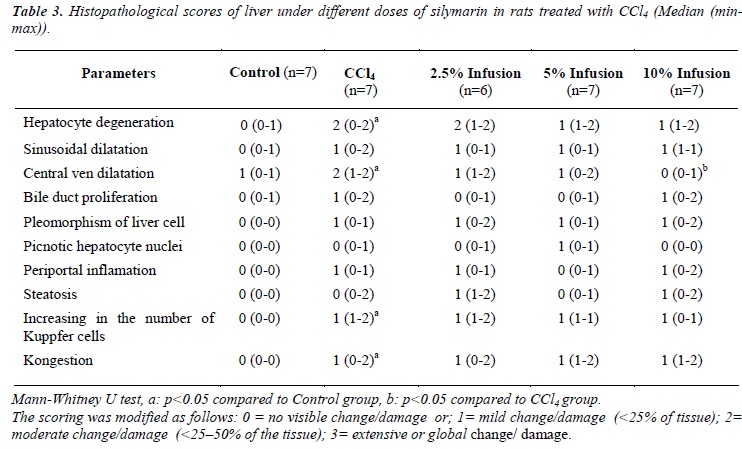 The silymarin content in fruits of milk thistle depends on the variety and geographic and climatic conditions in which they grow. It is found at several concentrations ranging from 1 to 6 % in the ripe fruit [13]. It was suggested by The European Pharmacopoeia (Ph. Eur.5.0) silymarin content should be at least 1.5% in dry drug. In our region, previous studies revealed that silymarin content was around 3% [14]. Therefore, we investigated the efficacy of different doses of Silybum marianum grown in our region on hepatotoxicity in rats.

Hepatotoxic and nephrotoxic effects of CCl4 and protective effects of Silymarin were widely investigated in different models. Abdel Salam et al condacted three experiment investigating ameliorating effect of various agents comparing with silimarin on hepatic damage induced by orally administered CCl4 (0.28 mL/kg). In one of their experiments [15], Viscum album alone or with silymarin, or silymarin alone had been orally received for 1 month, starting at the time of administration of CCl4. The levels of ALT, AST, and ALP were elevated and histopathologic findings such as loss of liver tissue architecture; severe dilatation and concession of blood vessels were shown in CCl4-treated rats, indicating hepatic injury. Treatment with either Viscum album with silymarin or silymarin alone has been biochemically and histopathologically exerted repairing effect. In their other two experiments misoprostol [16] and vinpocetine [17] were used instead of Viscum album. Treatment with them, alone or combination with silymarin, markedly ameliorated histopathological and biochemical alterations caused by CCl4.

Suja et al. [10] also used CCl4 to induce hepatic damage and used silimarin and Helminthostachys zeylanica (HZ) to treat it. The model was similar to our experiment. Treatment contioned 5 consecutive days and CCl4 were applied on days 2 and 3. In accordance with our findings, hepatic injury induced by CCl4 increased AST, ALT, ALP, bilirubin levels and caused histopathological alterations such as massive fatty changes, gross necrosis, and broad infiltration of lymphocytes and Kupffer cells around the central vein and loss of cellular boundaries. Tretament with HZ and silymarin showed similar positive effect on these changes.

Lee et al. [9] carried out different model than other studies to test the preventive effect of silymarin and tea seed oil (Camellia oleifera Abel.) against CCl4-induced oxidative damage in rats. For this reason, the two agents were administrated for 6 weeks. On the last day of treatment CCl4 were given. AST, ALT and lactate dehydrogenase (LDH) elevated because of CCl4 intoxication. Pretreatment with silymarin and tea seed oil reduced liver function tests. They found that CCl4 caused the lymphocytic infiltration in the central vein and fatty degeneration, necrosis, cytoplasmic vacuolization and mitosis in the hepatic cells. Treatment with tea seed oil and silymarin histologically showed preventive effect on CCl4-induced hepatoxicity. Lİke this, Merlin and Parthasarathy [18] used chloroform and ethanol extracts of Gmelina asiatica instead of tea seed oil. Silymarin was used as standard reference and exhibited significant the hepatoprotective activity against CCl4 induced hepatotoxicity in rats.

Silymarin has also been used for the treatment of hepatotoxicity caused by agents other than CCl4. Gopi et al. [19] constituted hepato- and nephrotoxicity by acetaminophen resulted in significant elevation of serum triglycerides, total cholesterol, blood urea nitrogen, serum creatinine, and aspartate transaminase activity. In their study, posttreatment with silymarin (25 mg/kg) significantly reversed the alterations. They had produced liver damage by giving acetaminophen in day 1-3. Then, silymarin treatment had been applied in day 4-14.

Shalan et al. [20] gave lead for 2, 4 and 6 weeks to produce liver damage. Accompanying to lead, silymarin (1 mg/100 body wheigt) plus vitamin C were given three times per week. Significant lead-induced elevations in serum ALT, AST, and ALP activities had been observed after 2, 4 and 6 weeks of treatment. Dilatation and congestion of terminal hepatic veins and portal vein branches were observed after 2 weeks. Hepatocyte proliferation, portal inflammatory infiltrate with disruption of the limiting plates (interface hepatitis), steatosis, apoptosis and mild fibrosis had been detected at the end of the sixth week. Combined treatment of Vitamin C and silymarin had been shown marked improvement of the biochemical and histopathological findings.

Mansour et al. [21] made hepatotoxicity by cisplatin (CDDP) administratin, which is a widely used anticancer drug. They showed that silymarin attenuated serum ALT, AST, liver nitric oxide (NO) and malondialdehyde (MDA) level, previously increasd by CDDP. Silymarin caused to increase the activities of superoxide dismutase (SOD), glutathione peroxidase (GSHPx) reduced glutathione (GSH) and serum NO level, which were previously decreased by CDDP. Likewise, CDDP was reported to cause liver damage in high doses via involvement of oxidative stres, lipid peroxidation, and mitochondria dysfunction [22].

Shaarawy et al. [23] induced hepatic destruction by Nnitrosodiethylamine (NDEA) plus CCl4. In their experiment, liver function enzymes and hepatic lipid peroxidation (LPO) was found to be increased and superoxide dismutase (SOD), and GSH-dependent enzymes decreased. Pradeep et al. [24] also showed that another N-nistroso alkyl compound, Diethylnitrosamine, induced alterations in the liver tissue and silymarin reversed these negative changes by improving antioxidant capasity. Protective effect of silymarin has also been shown on hepatic damage by many agents such as ethanol [25] and anti-tuberculosis drugs [26].

In this experiment, kidney function tests, BUN and creatinine, were increased by CCl4 and reduced by silymarin though insignificant. Turgut et al. [27] showed that silymarin had a protective effect on ischemia and reperfusion injury in the kidney tissues.

In summary, CCl4 administration caused hepatotoxicity and Silybum marianum treatment, though insignificant, exert protective effects. According to literature, these effects can mainly be attributed to its antioxidant effects. In accordance with our results, silymarin has clear effects in experimental animal models; however, it has not been proved effectiveness in human liver disease yet [13,32]. Another point is that, in humans, though the side effects of silymarin are uncommon, and serious toxicity has rarely been reported [13], it should be taken into account that the numbers of toxicological studies are few. Therefore, clinical and community oriented investigations to reveal possible side effects of silymarin would be usefull.

The authors thank Dr. Fatih Gultekin, Chairman of Biochemistry Department, Faculty of Medicine, Suleyman Demirel University, Isparta, for the helpful commands and constructive discussions on the manuscript, and to reading English proof.