To be a useful source in establishing specific strategies for health education and behavioral change, it is recommendable not only to list related factors, but to systematically approach in a theoretical frame [1]. Humans require calculated will when they do or do not act some behaviors. Behavioral theory, which does not focus on behavior itself, but on the will of behavior, is a useful model to understand practice will of dental health behavior [2]. In the theory of planned behavior, behavior is affected by intention and perceived behavior control, intention is determined by the attitude of behavior, subjective norm and perceived behavior control, and the theory is proved to be a helpful model in predicting smoking cessation behavior, health behavior, hospital infection control, and education program development, and so on [3-5].

The subjects were 32 male alcoholic patients who understood the purpose of study and agreed participation in the study that allowed the study in alcohol treatment clinic in D area.

The data collection and education of the subjects underwent their ethical consideration, so the approval (No. 12-05) was obtained from the Bioethics Committee of the Graduate School of Medicine of the Chungnam National University. The survey was conducted in the form of self-administered questionnaires by using the structured questionnaires after explaining the purpose of the study to the subjects, informing them of anonymity and confidentiality, and receiving the informed consent from the subjects who agreed the study, and the survey was conducted 2 times before and after the oral health education respectively.

Attitude toward the behavior: the expectation of feeling that can occur as a result of behavior, and it shows the degree of 'likes' and 'dislikes' [9]. 2) Subjective norm: influence by surrounding people who have an important meaning to one's behavior. 3) Perceived behavioral control: an individual recognition of easiness and difficultness in a specific behavioral performance. 4) Behavioral intention: intent about how voluntarily one tries to behave or how hard one tries to make an effort. 5) Oral health behavior: the final dependent variables and a series of behaviors and attitudes which maintain or promote the subject's dental health. In the study, it is the basic method to prevent dental diseases, and it is the selfreport result that the subject briefed of the number of toothbrushing periodically everyday for one week, focusing on practicable behaviors in daily life.

In order to conduct the covariance structure analysis, the input matrix of the structural equation model was applied with the Spearman's correlation coefficient matrix by AMOS using SPSSWIN (ver. 20.0) and its parameter was estimated by the Maximum likelihood method.

As the fitness of the overall model was Chi-square=170.886 (df=143) and the significance level was p=0.056, the model was suitable. GFI was 0.896, which was approximate to 0.9, indicating high fitness. The AGFI was also 0.895, which means that the model was in good condition. The lower RMR values mean the higher degree of conformity. In this study, RMR was 0.089, meaning that it has no problem in the degree of conformity. Moreover, If RMSEA was between 0.05 and 0.08, it is generally considered to be in good condition, and it showed 0.079 in this study. According to the effect of exogenous latent variables against the endogenous latent variable, which was produced through the structural equation, perceived behavior control shows that the path coefficient to behavior intention was 0.394, which has a positive direct effect in the Table 1. 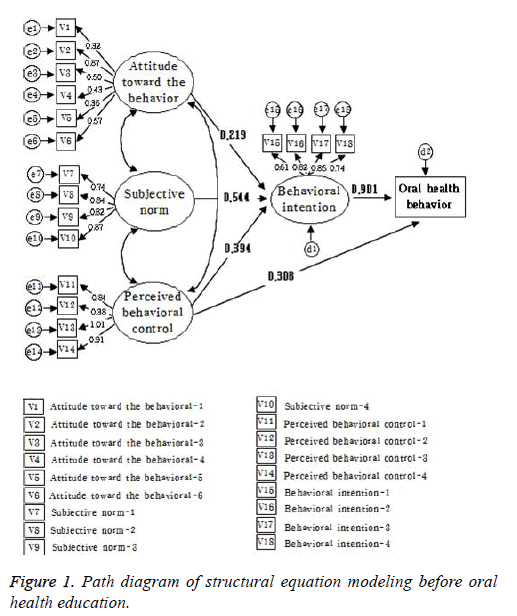 The fitness of the overall model was Chi-square=147.652 (df=137) and the significance level was p=0.252, so the model was suitable. GFI was 0.925, which exceeds 0.9, indicating high fitness. The AGFI was also 0918, which said that the model was in good condition. The smaller value RMR has, the higher degree of conformity it has. It was considered a good model when RMR was approximately 0.06 or less, and in this study, RMR was 0.031, which doesn’t indicate any problems with the degree of conformity. Also, If RMSEA was 0.05 to 0.08 or less, it was generally considered to be in good condition, indicating 0.050 in this study. According to the effect of exogenous latent variables on the endogenous latent variable, which was found through the structural equation, perceived behavior control shows that the path coefficient to behavior intention was 1.307, which has a positive direct effect. And the path coefficient to dental health behavior was 0.986, which has a positive direct effect in the Table 2. 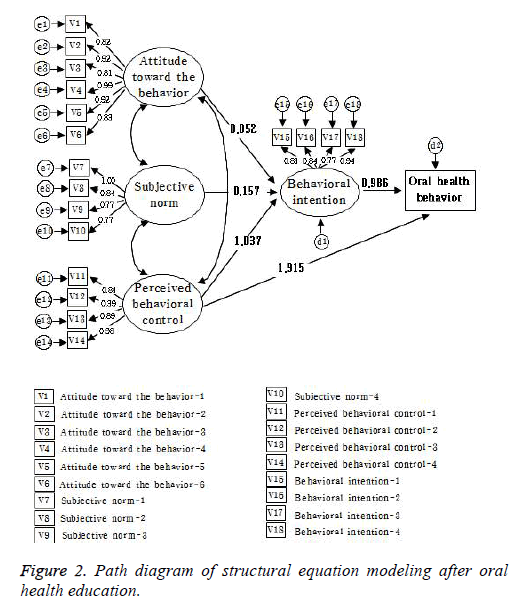 This study implemented 4-times oral health education programs for 4 weeks, and measured their effects immediately after the education, so their short-term effects were found, but faced a limit that patients’ condition after the completion of programs and frequent discharges from hospital made it impossible to observe subjects’ practices and regression phenomenon. Therefore, a systematic dental health education program should be developed in order to measure long-term effects, such as 3 months, 6 months, etc. [16-18].