Studies have shown that genetic factors involved in the host responses might determine the
severity of periodontitis and the missense mutation of S34N in human cathelicidin antimicrobial
peptide (hCAP) is one of the predominant factors in this severity. The aim of this study is to
study the effect of this mutation on protein dynamics. The FASTA sequence of the protein was
subjected to four different (SIFT, Polyphen-2, PhD-SNP and MutPred ) polymorphism effect
prediction servers and the same format of the sequence was used to modelled the three
dimensional structure of hCAP. The modelled structure was then subjected to Molecular
dynamics simulations for Atomic insight. All the four servers predicted the mutation to be
damaging and on analysing the effect of this mutation with the help of GROMACS, the results
were showing the mutant structure unstable and differencing at every level in comparison with
wild type hCAP.

Periodontal diseases are characterized by localized infections and inflammatory conditions that directly affect teeth supporting structures which are the major cause of tooth loss [1]. Several studies have demonstrated the involvement of autoimmune responses in periodontal disease [2-7]. Bacteria in the dental plaque induce antibody formation, Autoreactive T cells, natural killer cells; ANCA, heat shock proteins, autoantibody, and genetic factors are reported to have an important role in the autoimmune component of periodontal disease [8]. Studies have suggested that genetic factors are important determinants of susceptibility to periodontitis since they determine and modify host responses to the microbial challenge [9, 10]. Any anomaly in the immune responses against bacterial stimulus may cause variations in the susceptibility for periodontitis [11]. The severity of periodontitis is dependent on genetic factors involved in host responses [12, 13].

Microbial dental plaque is the major factor causing periodontitis and many studies have shown that genetic factors play a crucial role in the susceptibility for aggressive periodontitis [14]. hCAP (Human cathelicidin antimicrobial peptide) an 18kDa protein is the only known cathelicidin for humans, which act as an antimicrobial agent [15,16] by binding to the microbial cell membrane and killing the bacteria by disrupting its metabolism[17]. This protein is an important defence molecule in the oral cavity as its epithelia is at constant expose to microbial pathogens [18] and its presence in human tongue, buccal mucosa and saliva also underlines its importance in oral immunity [19,20]. The hCAP is expressed by CAMP gene, which has been found to carry missense mutation at codon 34 i.e. p.S34N which seems to be contributing factor for generalized aggressive periodontitis [21].

Our aim here in this study is to explore the effect of this mutation on protein dynamics using molecular dynamics simulation simulations (MDS) tool. THE tools has been used to understand the effect of the mutation on the protein at atomic level [22,23].Various polymorphism effect prediction servers available online: SIFT [24], Polyphen-2 [25], PhD-SNP [26] and MutPred [27] were also used to elucidate the effect.

As the crystal structure of hCAP is not available, Molecular modelling using I-TASSER [28] an online protein modelling server was used. The FASTA sequence of the 170 amino acids was subjected to the server and the model with the best C-score was selected for further study.

Four in silico tools were selected meticulously so as each factor is looked into and double checked by other tool which uses different algorithm to predict the effect of the polymorphism on protein structure and function.

The MDS studies were performed by Gromacs 4.5.3 package [29]. For Wild type (wt) hCAP the modelled structure was used as a starting structure for MDS and the Accelrys Discovery Studio [30] was used to make single point mutation at codon 34 to get mutant (mu) structure. The structures obtained were then subjected to GROMOS96 43a1 force field and then placed in a model of a pre-equilibrated water bath. To obtain the ionic neutral environment, counter-ions were added using the “genion” tool of gromacs package. Both the ions and solvent molecules of both the wt and mutant system were restrained to the original position with a force constrain of 100Kcal/mol for 5000 steps before being subjected to energy minimization for 5000 iteration. Regular Berendsen temperature coupling method [31] was used for regulating the temperature inside both the systems. Electrostatic interactions were computed using the Particle Mesh Ewald method [32]. The non-bonded pair list was updated every five steps and conformations were stored every two pico seconds (ps). Position restraint simulation for 1000 ps was implemented to allow solvent molecules to enter the cavity region of structure. Finally, system was subjected to MDS for twenty nano seconds (ns). Root mean Square Deviation (RMSD), Root Mean Square Fluctuation (RMSF), Radius of gyration (Rg) and Principal component analysis (PCA) were carried out by using inbuilt gromacs tools. g-hbond was used to calculate number of distinct hydrogen bonds formed by specific residues to other amino acids within the protein during the simulation (NH bond). g_sham was used extensively used to obtain free energy landscape. The graphs were plotted using Grace GUI toolkit 5.1.22 version. The free energy land scapes were plotted using gnuplot 4.6.0 version. All the visualizations were carried out using Pymol, Ligplus, VMD [33] and graphs were plotted using Grace Program [34] and GNUPlot. The trajectories were analyzed using the inbuilt tool in the GROMACS distribution.

The protein structure was modelled using I-TASSER, an online server which uses threading method. The best model based on C-score had good quality and resolution (Figure 1) was selected and the subjected to PROCHECK in SAVES server to check its psi-phi distribution, the amino acids arranged in most favoured regions in plot were 89.2% and some of the amino acids in disallowed regions of 2.3%. 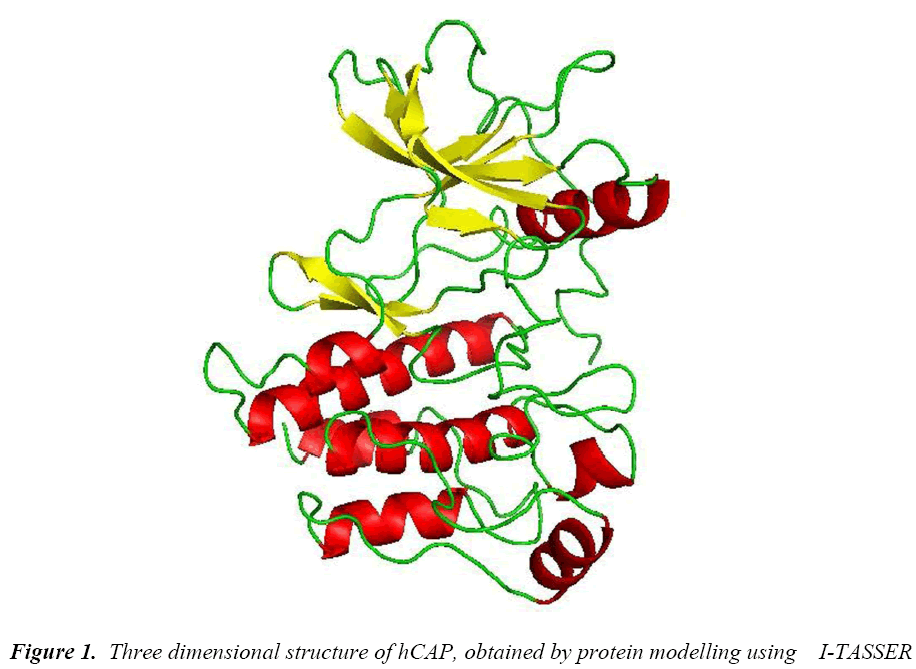 Disease association with amino acid polymorphism is difficult, as the polymorphism can have a vast number of effects on the gene product. These effects can be in stability, structure, disruption in catalytic active site, ubiquitination site etc. The Four Insilico tools that we used for this study gave us an idea about the possibility of the disease association of the S34N polymorphism. The details of the servers that are used in our study and the results generated are described in where there algorithm, working and criteria for selection is give. All the servers showed the polymorphism to be damaging.

To analyse the effect of the polymorphism of S34N at atomic level, MDS approach was used. Figure 2 shows the difference between the two structures at different intervals of time at constant temperature and pressure during the simulations, showing the change in protein structure due to mutation. For further analysis Gromacs inbuilt tools g_rmsf, g_rms, g_ gyrate, g-covar and g_anaeig were used. 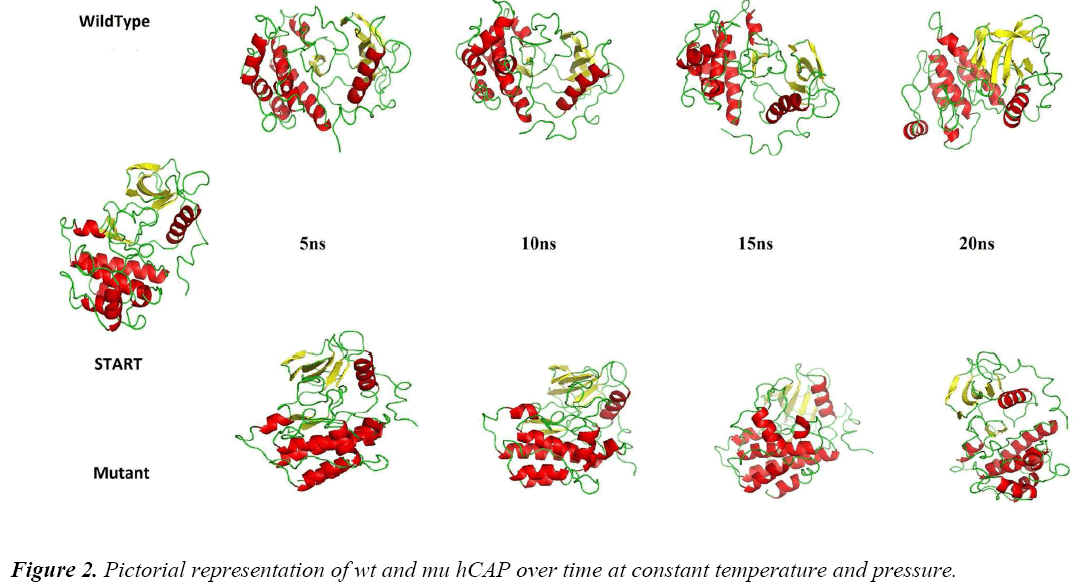 Figure 2: Pictorial representation of wt and mu hCAP over time at constant temperature and pressure.

g_rms gave us the RMSD (root mean square deviation) value curves of wt and mu hCAP during the simulations, Figure 3 represents RMSD fluctuations of both wt and mu structures over twenty thousand picoseconds. The analysis is indicating that mutation at codon 34 from S to N is effecting the conformation of the hCAP, with mutant structure showing more deviation pattern than native in general. 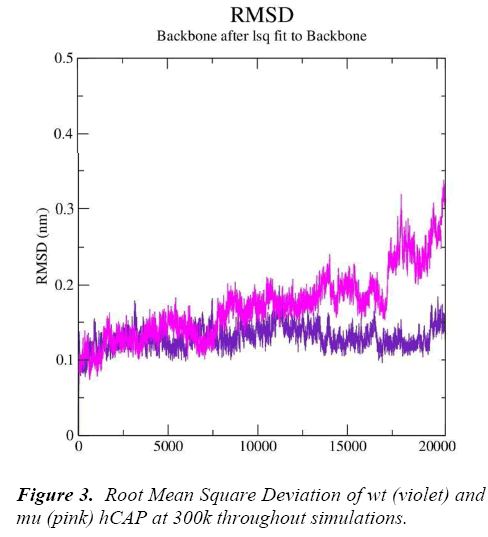 g_rmsf was used to calculate the atomic standard deviation .From this analysis it is evident that mutation at codon 34 from S to N is making the mutant structure more fluctuating (Figure 4) particularly at residue 34 , 50, 140 and 160 .These fluctuations in the mu structure is over all and not specified to the region of polymorphism. 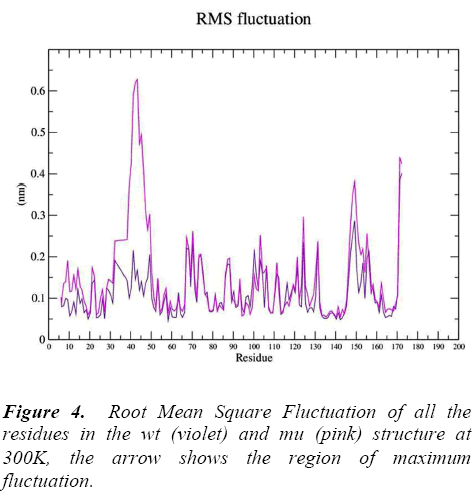 Figure 4: Root Mean Square Fluctuation of all the residues in the wt (violet) and mu (pink) structure at 300K, the arrow shows the region of maximum fluctuation.

After these two interlinked analysis, change in radius of gyration of the two structures was calculated using g_gyrate tool. The tool analyzes the shape of the protein over time at constant temperature and pressure, the results generated show that the mutant structure is more compact than the native hCAP .In Figure 5(a) the black represents the native structure and red the mutant, Figure 5(b) and 5(c) are the representation of Radii of gyration of native and mutant structure over the three axes. 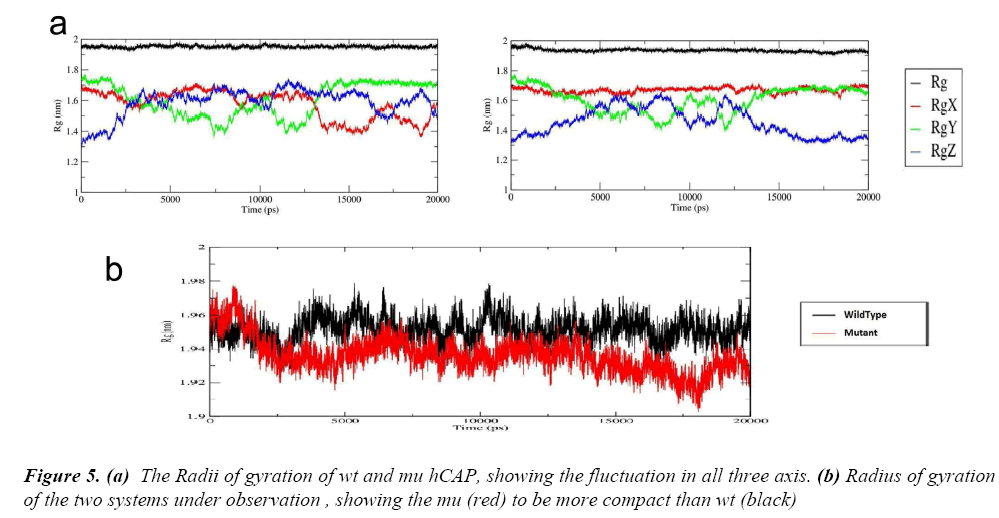 To further understand the effect of the S34N mutation on hCAP, g_hband tool was used. The intra-protein hydrogen bond pattern over time was studies. The native protein is forming about 120 out of 52344 possible average number of intra-protein hydrogen bonds per timeframe, while as mutant is forming 130 out of 52344 possible, The result is in accordance with Rg of both structures over time, the increase in number of hydrogen bond in corroborating with the mutant structure being more compact.

g-covar and g_anaeig tools were used for understanding the effect of this mutation on global correlated motions in atomic simulations. The figure 6 depicts the projection of principal component 1 vs. principle component 2 of both structures, the cluster obtained from wt structure is stable , where as the projection of first two PC of both mutants is covers a large area. 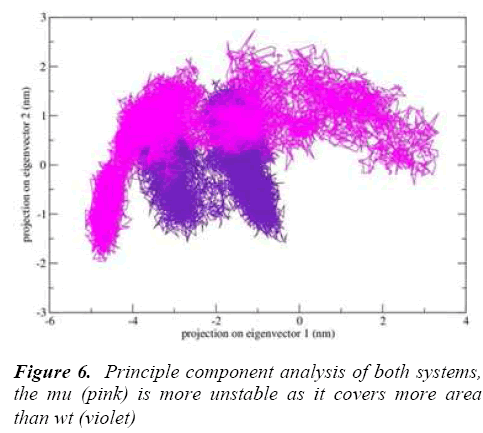 Figure 6: Principle component analysis of both systems, the mu (pink) is more unstable as it covers more area than wt (violet)