With the accelerated process of industrialization, incidence of cardiovascular and cerebrovascular disease especially ischemic stroke is increased year by year [1]. Ischemic stroke with nerve injury seriously affect the life and health of patients [2].

Culture conditions of RNSC-FMU1 cells are as follows: first the cells were taken from liquid nitrogen and put a 37°C water bath to quick unfreeze, followed by centrifugation at 800 rpm for 5 min. Removing Preservation liquid was removed, cell pellet was resuspended in 5 ml of DMEM culture medium with 10% fetal bovine serum [12], and cultured at 37°C with 5% carbon dioxide for 48 h. Cells were then split and cultured for transfection or other experiments.

Transfection of RNSC-FMU1 cells with liposome was carried out according to the method published previously [13]. microRNA125 siRNA and control siRNA sequences are as follows: 5'CGCCAGGGTTTTCCCAGTCACGAC3', 5'AGCGGATAACAATTTCACACAGGA3', 5' GGGCTGGCAAGCCACGTTTGGTG 3', 5' CCGGGAGCTGCATGTGTCAGAGG 3'. RNSC-FMU1 cells were transfected for 12 h.

The detection of caspase-3 activity in [18] was performed according to the manufacturer’s instruction.

Establishment of a rat model of ischemic stroke

As shown in Figure 1, RT-PCR results showed that the mRNA expression level of microRNA125 was increased in brain stem cells of rats with ischemic stroke, compared to that of the controls (P=0.017). 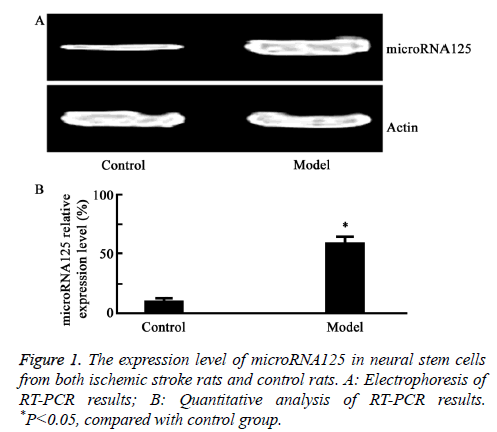 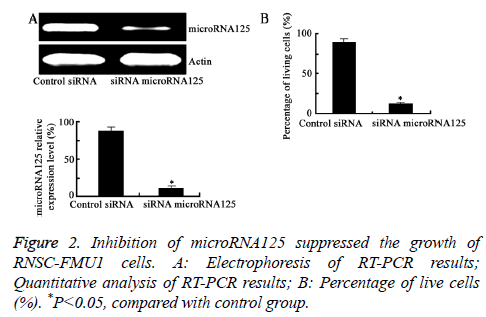 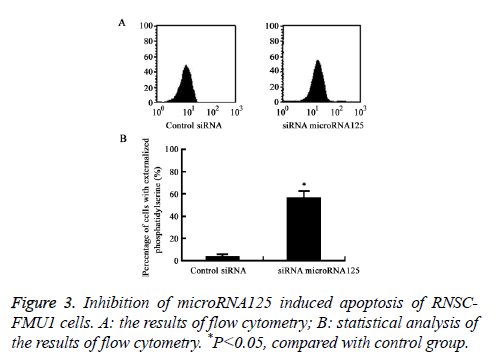 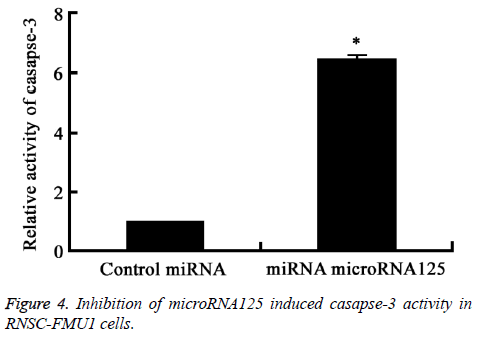 Figure 5 showed that compared to control group, transfection of microRNA125 enhanced the growth of RNSC-FMU1 neural stem cells with no induction of apoptosis (P=0.019).

Figure 5: Transfection of microRNA125 enhanced the growth of RNSC-FMU1 cells without induction of apoptosis. A: relative expression levels of microRNA125; B: percentage of living cells; C: relative activity of casapse-3. *P<0.05, compared with control group.

It is worth to mention that this study does not have the in vivo study of microRNA125 [26-28]. Effect of microRNA125 on different stages of ischemic stroke also needs to be further explored and more animal’s numbers need to be used in the future study.

In summary, the data suggest microRNA125 is highly expressed in nerve injury of ischemic stroke rat model.MicroRNA125 expression might be used as a potential biomarker for nerve injury in ischemic stroke. Lowering levels of microRNA125 can decrease the growth ability and induce apoptosis of RNSC-FMU1 cells. Increasing the expression levels of microRNA125 can enhance the growth ability and decrease the apoptosis of RNSC-FMU1 cells.

The data of this study are of great significance for the development of new anti-ischemic stroke drugs.