Objective: To investigate the effect of ischemic preconditioning combined with α7 nAchR agonists on limb ischemia-reperfusion lung injury in rats.

Conclusion: Ischemic preconditioning and α7 nAchR agonists can attenuate limb ischemia-reperfusion lung injury in rat to a certain extent, and the combined effect of the two is better than the separate application.

Limb ischemia is a common clinical pathological process, such as prolonged use of tourniquet, arterial injury or embolism, abdominal aortic aneurysm surgery, severe limb crush injury [1-4]. After recovery of blood flow, ischemia perfusion not only leads to further tissue damage, but also can cause damage to distant organs [5], especially lung tissue [6,7]. Previous studies have suggested that oxidative stress and inflammatory response play an important role in the development of limb ischemia/reperfusion (I/R)-induced lung injury [5,8,9].

Different treatments have been reported to reduce I/R-induced lung injury [10-14], including ischemic preconditioning (IP) [13,14]. IP can relieve lung injury by reducing lipid peroxidation [13], inducing expression of lung tissue heme oxygenase-1 (HO-1) and increasing endogenous antioxidant capacity in vivo [14]. Nicotinic acetylcholine receptor (nAchR) is composed of five identical or different subunits of pentamer, the central forms of an ion channel, belonging to the ligand gated ion channel receptor [15]. α7 nAchR consists of five identical α7 subunits, which is important component of the cholinergic anti-inflammatory pathway (CAP) to recognize the immunoregulatory signal of the vagus nerve and transmit it to the effector cells, activating the endogenous immunoregulatory response [16,17]. α7 nAchR agonists can simulate the vagus nerve stimulation effect to reduce inflammation by regulating the inflammatory signaling pathway [17]. Activation of α7 nAchR has been demonstrated to relieve sepsis and lung injury induced by mechanical ventilation [18,19], but whether it has protective effect on I/R-induced lung injury has not been reported. Therefore, in this study we evaluated the protective effects of IP, α7 nAchR agonists, and their combination treatment on I/R-induced lung injury.

Fifty healthy male Sprague Dawley rats weighing 230-280 g were provided by Nanchang University Experimental Animal Center. The rats were fed in the animal laboratories with room temperature of 22-26°C, air humidity of 50-60% and circadian rhythm of 12:12 h. They were free for drinking water, preoperative fasting lasted 12 h. All animal experiments have been reviewed and approved by Medical Research Ethics Committee of the First Affiliated Hospital of Nanchang University.

At the end of 3 h-reperfusion, carotid arteries were dissected to take 0.5 ml of arterial blood for blood gas analysis as soon as possible (Gem Premier 3000). After intraperitoneal injection of pentobarbital (90 mg/kg), rats were anesthetized and euthanized, and the thoracic cavity was opened rapidly. The lung tissues were completely removed under sterile conditions and the bloodstains on the surface of lung tissue were blotted with filter paper for weighting. Pulmonary coefficient=the wet mass of total lung (g)/body mass (g) × 100%.

HE staining of lung tissue and scoring

Weigh 0.1 g of the right lung tissue, according to proportion of the weight (g): volume (ml)=1:9, 9 ml of pre-coolingsaline was added, and then lung tissue was quickly cut into pieces with the ophthalmic scissors, and prepare homogenate in ice water bath. The grinded lung tissue homogenate was centrifuged at 4000 rpm, at 4°C for 10 min, and then the supernatant was stored at -20°C. The concentration of protein in the supernatant of the homogenate was determined by BCA method. The kit was purchased from Beijing Kangwei Century Biotechnology Co., Ltd. The levels of IL-6 and TNF-α in tissue homogenate were measured by enzyme-linked immunosorbent assay (ELISA) kit. (Beijing Sizhengbai Biotechnology Co., Ltd). The activities of superoxide dismutase (SOD) and malondialdehyde (MDA) was determined by kit form Nanjing Jiancheng Biology Co., Ltd. All operating procedures follow the instructions.

Table 1. The results of arterial blood gas analysis at the end of perfusion in each group. 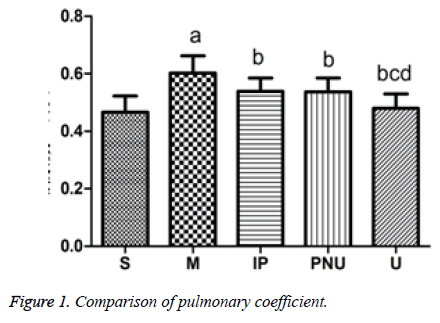 Each group was evaluated by HE, the scores of group M was significant increased compared with S group. The scores of IP group, PNU group and U group were significantly lower than M group (bP<0.05). Compared with IP group and PNU group, the score of U group was significantly lower, with statistical difference (cP<0.05, dP<0.05). The above results demonstrated that the severe lung injury was caused by modeling in M group, IP group, PNU group and U group could alleviate lung injury, among which U group had the best effect.

The concentration of SOD and MDA in lung homogenate

MDA is one of the representative products of lipid peroxidation, which can reflect the severity of oxidative stress, and the level in directly represents the severity of the body cells attacked by free radical. SOD is an important antioxidant in the body, indicating the level of antioxidant capacity in vivo. As shown in Figure 2, compared with S group, the concentration of MDA in M group was significantly higher than that in S group, while SOD was significantly lower (aP<0.05).

Figure 2: The concentration of SOD and MDA in lung homogenate.

Compared with M group, the concentrations of MDA in IP group, PNU group and U group decreased and the SOD concentration increased (bP<0.05); Compared with the IP group and the PNU group, the concentration of MDA in group U was decreased and the concentration of SOD increased significantly (cP<0.05, dP<0.05). These results indicated that lipid peroxidation in lung tissue of ischemia-reperfusion model rats in M group showed a pathological increase, the anti-oxidative capacity was in pathological reduction, the IP group. The treatment of IP group, PNU group and U group could alleviate the oxidative stress in the rats lung (P<0.05), while U group was superior to IP group and PNU group. The inflammatory factors TNF-a and IL-6 can promote neutrophils, macrophages, monocytes and lymphocytes and other inflammatory cells to chemotaxis, adhesion, aggregation, activation and degranulation, as well as the release of inflammatory mediators such as lysosomal enzymes, protein hydrolase and lipid mediators, which can evaluate the extent of pulmonary inflammatory injury.

The concentration of TNF-a and IL-6 in lung homogenate

Figure 3: The concentration of TNF-a and IL-6 in lung homogenate.

In this study, after 3 h-limb ischemia and 3h-reperfusion, the arterial blood PaO2 of the I/R model group decreased, indicating that the lung ventilation function was impaired, and the index of the vascular permeability-pulmonary coefficient ratio was increased. The morphology of lung tissue was observed under light microscope, the alveolar wall was extremely thickened, the alveolus was seriously collapsed, the lung tissue was hemorrhagic and the pulmonary interstitial inflammatory cells were infiltrated. The above phenomena showed that the model of lung injury induced by limb ischemia-reperfusion preparation successes.

The etiology of limb ischemia-reperfusion injury is diverse. It not only affects the survival and function of ischemic tissue, but also causes systemic inflammatory response syndrome (SIRS), leading to multiple organ dysfunction syndrome (MODS), in which the lung is one of the most vulnerable organs [22]. The clinical manifestations includes dyspnea, severe hypoxemia, acid-base balance disorders. The mechanism of LIR-ALI is complicated, including inflammatory reaction, oxidative stress, down-regulation of cystathionine-γ-lyase (CSE)/hydrogen sulfide (H2S) system, activation of renin angiotensin aldosterone system (RAAS) [23,24], in which inflammation and oxidative stress are the central links in the development of LIR-ALI.

TNF-a, as an important inflammatory mediator in the LIR-ALI process, not only produces direct cytotoxicity, but also mediates tissue damage through neutrophils (PMN), initiating a "cascade" of inflammation to increases the production of other inflammatory mediators. IL-6 is considered as an important pro-inflammatory factor to promote the activation and aggregation of PMN to aggravate lung injury. Therefore, TNF- α and IL-6 can better reflect the inflammatory process of LIRALI in rats. MDA is a kind of lipid peroxidation metabolites of polyunsaturated fatty acids, its content can reflect the degree of lipid peroxidation, and indirectly reflecting the degree of oxidative damage. SOD is the main antioxidant enzyme in vivo, and can remove oxygen free radicals to prevent cell membrane from lipid peroxidation. When a large number of free radicals are generated, the endogenous antioxidant enzyme system of the tissue is consumed in a large amount due to the participation in the anti-oxidation, and the SOD activity is decreased. As a result, MDA and SOD can reflect the oxidative stress of LIR-ALI in rats.

Ischemic preconditioning has been demonstrated to reduce ischemia-reperfusion injury in multiple tissues [25-27], and its protective effect on ischemia-reperfusion-induced lung injury has also been proved. Olguner et al. [13] found that three pretreatments of 10 min/10 min-ischemic/reperfusion can reduce lipid peroxidation level and the degree of leukocyte aggregation of lung tissue in rats treated with 4 h-lower extremity ischemia and 2 h-reperfusion. Peng et al. [14] further found that IP could reduce the injury of lung tissue induced by 3h-ischemiaand 3 h-reperfusion through inhibiting the activation of NF-κB pathway and alleviating the inflammation and oxidative stress of lung tissue mediated by HO-1. This study also demonstrated that compared with the model group, MDA, histopathological score, IL-6 and TNF-a levels of lung tissue in IP group were lower, while the level of SOD was increased, suggesting that oxidative stress and inflammation levels have improved.

Stimulation of vagal efferent nerve can cause the release of acetylcholine (Ach), Ach binds specifically to α7 nAchR on the surface of tissue macrophages to inhibit inflammatory cytokine release [28]. This Ach-mediated CAP pathway is closely related to the inflammatory response. Recent studies have shown that α7 nAchR agonists can effectively inhibit NFkB expression, cytokine release, and activation of endothelial cells and macrophage [29,30]. He et al. [31] reported that α7 nAchR agonists can reduce the levels of MDA, TNF-a and IL-6 in lung tissue and increase SOD level, thereby alleviating intestinal ischemia-induced acute lung injury. In this study, compared with the model group, in the agonist-treated group, the SOD content was increased, and the levels of SOD, MDA, IL-6, TNF-a and lung histopathological score in the lung tissue were decreased.

I/R reperfusion results in a large number of leukocytes infiltrated, aggregation of inflammatory molecules and oxidized matter in lung tissue, and they can promote each other, further damage the integrity of pulmonary capillary endothelial cells, leading to pulmonary ventilation dysfunction [32,33]. In this study, the blood gas analysis of PO2, PCO2, pH can reflect the gas exchange function of lung. PO2 in the five groups were statistically different, the PO2 of the model group was the lowest, the PO2 of the three treatment groups was higher, and the united group was more obviously higher than the other two treatment groups. However, PCO2 and pH, similar to PO2, the difference trend displayed in each group, but they were not statistically significant. Following are possible reasons: 1) The large changes between data of the two sets of indicators and inadequate sample number; 2) The response of PCO2 and pH to lung gas exchange function was not as sensitive as PO2, but also effected by acid-base balance of the environment in vivo.

In conclusion, ischemic preconditioning and α7 nAchR agonist can reduce the limb ischemia-reperfusion lung injury in rats to some extent, and the united effect of the two is better than the single application.

Activation of α7 nAchR attenuates lung injury induced by limb ischemia-reperfusion in rats. Ischemic preconditioning can relieve the lung injury induced by limb ischemia-reperfusion in rats, and united treatment of ischemic preconditioning and α7 nAchR agonist can produce better lung protection. In the present study, we only studied the changes of lung injury after 3 h reperfusion in rats. We did not observe the changes of lung injury at 1 h or 2 h, and did not study the lung protection in the long-term (24 h or longer). And only four biochemical markers, such as TNF-a, IL-6, MDA and SOD, were tested, without more comprehensive testing. At last, the mechanism of elucidating the molecular level is not further elucidated in this experiment, and it needs to be further perfected and studied. The experiment is based on the basic experimental animal research. For clinical treatment, clinical practice research, such as clinical drug dose selection is in need, and the two methods of united use timing should be further explored.