This work aims to investigate the effect of traditional Chinese medicine fast-acting asthma relieving mistura (in Chinese, Suxiao Pingchuan Heji) on serum LTC4 expression in mouse models of asthma. 50 KM mice were randomly divided into Group A (control), group B (asthma model), group C (dexamethasone intervention), group D (fast-acting asthma relieving mistura intervention), and group E (intervention by dexamethasone together with fastacting asthma relieving mistura). The asthma models were established by intraperitoneal injection and aerosol inhalation with ovalbumin. The serum LTC4 level in mouse was determined by ELISA method, and the pathological change of lung tissue was observed underlight microscope. There was a little serum LTC4 expression in group A. The LTC4 level in group B was significantly higher than group A (P < 0.01), and that in group C, D, E was significantly lower than group B, respectively (P < 0.01). The inhibition effect on LTC4 expression in group E was obviously greater than group C and D, respectively (P < 0.01), with no significant difference between group C and D (P > 0.05). There was obvious change of inflammatory cell response in group B, with relatively mild inflammatory change in group C, D and E. No inflammatory change was found in group A. Over-expression of LTC4 is closely related to the occurrence and development of asthma. Fast-acting asthma relieving mistura can inhibit the over-expression of LTC4, thus preventing the further development of airway inflammation in asthma.

Bronchial asthma (abbreviated asthma) is a chronic inflammatory airway disease involving many cells such as eosinophil, mastocyte, T lymphocyte, neutrophil, and airway epithelium [1]. As shown in many current studies, the pathogenesis of asthma is that, the inflammatory immune cells and secreted inflammatory mediators interact with various cytokines, leading to IgE-dependent immediate allergic reaction and eosinophil infiltration dominated chronic airway inflammation [2,3]. These inflammatory cells could synthesize and release a variety of inflammatory mediators. LTC4 is one of the primary inflammatory mediators in the occurrence and development of asthma [4,5]. However, the role of LTC4 in pathogenesis of inflammation in asthma, the relationship between LTC4 over-expression and the occurrence and development of asthma, and the effect of traditional Chinese medicine fast-acting asthma relieving mistura (FAARM) (in Chinese, Suxiao Pingchuan Heji) on LTC4 expression need to be further studied.

In this study, the role of LTC4 in pathogenesis of asthma and effect of FAARM on serum LTC4 expression in mouse models of asthma were investigated. The objective is to provide a theoretical basis for treatment of asthma and improve the life quality of patients with asthma.

Establishment of mouse models of asthma

The mouse models of asthma were established in the method of OVA sensitization and excitation. On the 1st day of experiment, all mice in group B, C, D, and E were intraperitoneally injected with 0.2 mL of fresh OVA solution (containing 100 ug of OVA and 2 mg of aluminum hydroxide). The injection was repeated l week later. On the 15th day, the mouse was placed in a transparent and airtight organic glass cabinet, and was treated by 30 minutes of aerosol inhalation with 2 mL of 2% OVA saline solution to excite the asthma. The treatment was performed once a day, for 2 consecutive weeks. The respiratory and systemic conditions of mice were observed. Appearance of symptom of faster breathing, sneezing and nose rubbing, perioral cyanosis, abdominal cramps, or nodding respiration indicates a successful excitation. For group A, equal amount of 0.9% saline instead of OVA was used for intraperitoneal injection and aerosol inhalation, using the molding method similar with other groups.

The drug intervention in each group was conducted 30 minutes before excitation. Mice in group C were intraperitoneally injected with DEX (5mg/kg, equivalent to 0.5 mg/kg for human). In group D, mice were drenched with FAARM (concentration of crude drug, 1 g/mL; 15 g/kg), once per day for 14 successive days. In group E, FAARM was intragastricly administrated (15g/kg), and DEX was simultaneously intraperitoneally injected (5mg/kg). The treatment was conducted once per day for successive 14 days. The specific dosages of drugs were determined in the light of drug conversion formula of conventional animal to human with different body weight ("experimental animal and technology", edited by He S L) as follows: D2 = D1 × K2/K1 (D2, the calculated dosage; D1, the known dosage: K1 and K2, was obtained by table look-up).

Mice were anaesthetized by intraperitoneal injection of pentobarbital sodium. After eyeball removal, 1mL of blood was collected from each mouse. After centrifugation, the double antibody sandwich ELISA assay was performed for determination of serum LTC4 level to determine the level of LTC4 in serum

The right lung middle lobe tissue the middle lobe tissue of right lungwas separated from the mouse. After dehydration, being transparent, waxing, embedding, sectioning, mounting, parching, and HE staining, the general histopathological change of specimen was observed in light microscope, and the microscopic photography was conducted.

Serum LTC4 level in each group

Histopathological change on airway wall in each group 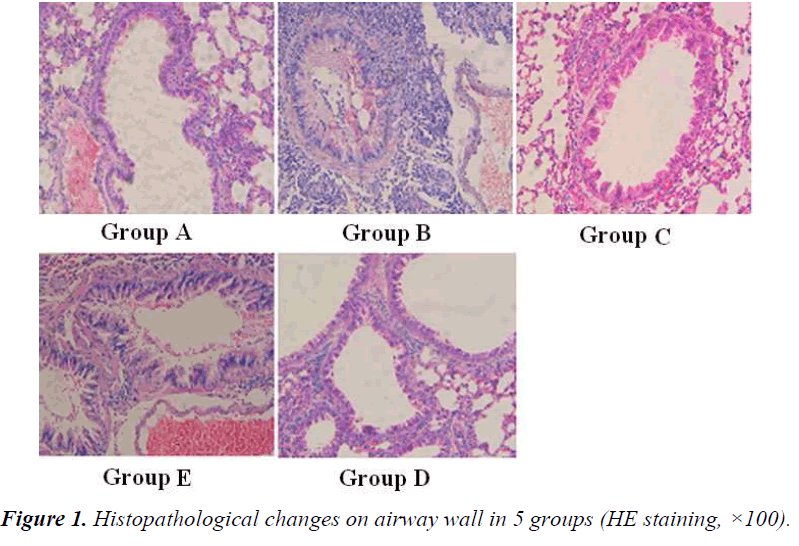 Figure 1: Histopathological changes on airway wall in 5 groups (HE staining, ×100).

Chronic airway inflammation is the basic pathological change of asthma [6]. In the process of inflammatory cell activation and infiltration,inflammatory mediator release and airway endothelium injury, the inflammatory cell gathering and migration to inflammation site is the most crucial step [7,8]. LTC4 is one of important inflammation factors in pathogenesis of asthma [9]. It can promote mitochysis of airway structural cell (e.g., bronchial smooth muscle cell), goblet cell hyperplasia, collagen deposition, and propria lamina fibrosis, thus facilitating the airway reconstruction for patients with chronic asthma [10]. Endothelin- 1 (ET-1) is the most powerful bronchial smooth muscle contraction agent. LTC4 can up-regulate the mRNA expression of ET-1 in airway epithelial cells and smooth muscle cells, and promote the release of ET-1 [11]. In addition, LTC4 can induce the P-selectin expression on surface of leukocytes and endothelial cells, leading to migration of PMN along blood vessel endothelium [12,13]. The over-expression of eosinophil specific Pselectin ligand can promote the adhesion of selective eosinophils with neutrophils [14]. This promotional effect on migration and aggregation of inflammatory cells can cause the production of LTC4, which makes more inflammatory cells enter the airway, so the inflammation was further aggravated [15,16]. Wang et al. [13] found that the LTC4 induced oxidative stress can aggravate the airway inflammation. Studies of Yin et al. [17] on children with asthma shows that, the serum LTC4 levels in children with mild, medium, and severe asthma increase accordingly, and were significantly higher than that in healthy children, respectively (P < 0.01). As found by Zhu et al. [18,19], the serum levels of LTC4 in patients with asthma in both attacking stage and relieving stage are higher than normal group. LTC4 is not only involved in allergic airway inflammation, but also an important factor in reconstruction of asthmatic airway.

In this study, the double antibody sandwich ELISA assay was performed to determine the serum LTC4 level, and the effect of FAARM on LTC4 expression was observed. Results indicated that, there was a little serum LTC4 expression in group A, and the LTC4 level in group B was significantly higher than group A. This indicated that, the overexpression of LTC4 played an important role in pathogenesis of inflammation in asthma. It could also be found in this study that， the LTC4 level in group C, D and E was significantly lower than group B, respectively. The inhibition effect on LTC4 expression in group E was obviously greater than group C and D, respectively, with no significant difference between group C and D. It was speculated that, the effect of FAARM on asthma might be partially related to its inhibition on over-expression of LTC4.

Histopathological detection results in this study showed that, in mice with asthma, there were obvious infiltration of eosinophils, lymphocytes，neutrophils and duplicature on airway wall, with different degrees of necrosis and ablation of epithelium. After intervention by FAARM, the infiltration of inflammatory cells on airway wall was significantly reduced. It was speculated that, FAARM could reduce the over-expression of LTC4 and inhibit the further development of inflammation in asthmatic airway, thus relieving the asthma attack.

It can be concluded that, the over-expression of serum LTC4 plays an important role in pathogenesis of asthmatic inflammation, and FAARM has remarkable inhibitory effect on expression of LTC4. There is no significant difference in intervention effect between FAARM and DEX. This indicates that, FAARM can be used to partially replace DEX in treatment of asthma, for reducing the side effects of hormonotherapy. However, the conclusions in this study still need to be further verified by repeated experiments and more clinical observation.