Immunological disturbances in T2DM have an association with CMI and an inappropriate immune response may result from the defects in the action of insulin that is required for Tlymphocyte function. ADA, an enzyme distributed in human tissues, is considered a good marker of CMI as well as a marker for insulin function. Dipeptidyl peptidase - 4 (DPP- 4) also known as adenosine deaminase binding protein (ADABP) binds with ADA to activate T lymphocytes. DPP4 inhibitors are currently regarded as potential oral drugs for the treatment of T2DM and have shown improved efficacy over time. This study was conducted in order to make a contribution to the understanding of the effect of DPP-4 inhibitors on the ongoing immune disturbances in T2DM by analysing their serum ADA level and comparing the effect of other commonly prescribed oral anti-diabetic drugs on the activity of this enzyme. A group of 96 newly diagnosed T2DM patients on oral hypoglycemic medication and 46 healthy non-diabetics were enrolled as cases and controls, respectively. 50 subjects were taking a combination drug comprising of SU +Met (Group 1) and 46 were taking an add on DPP-4 inhibitor (Group 2). Serum ADA activity was investigated in the whole study group. It was found to be significantly decreased in group 2 as compared to group 1. A positive correlation between the enzyme activity and HbA1c levels was observed in these patients (Group 2) as well, when compared to cases on other oral anti-diabetic drugs (Group 1) indicating the ability of DPP-4 inhibitors to significantly alter the immune status along with the glycemic status in T2DM.

Diabetes mellitus is a metabolic disorder of multiple etiologies, characterised by hyperglycemia leading to long term complications [1]. It is known that hyperglycemic conditions lead to increased ADA activity, which is an enzyme involved in purine nucleoside metabolism and also plays an essential role in the immune system [2]. ADA is a polymorphic enzyme that irrerversibly deaminates adenosine to inosine, contributing to the regulation of intracellular and extracellular concentration of adenosine [3]. An increase in ADA activity in DM may be a reflection of altered immunity in the pathology of these patients [4].

DPP-IV, a cell surface protease, exerts its biological effects by two distinct mechanisms. First by binding with ADA and activating intracellular signalling pathways extensively characterised in T-cells [5]. The other mechanism is by rapidly inactivating GLP-1 (Glucagon like peptide-1), an incretin hormone which induces insulin secretion in a glucose-dependent manner in pancreatic beta cells [6]. With higher ADA activity in insulin sensitive tissues, the level of adenosine which increases glucose uptake into cells will be reduced. Thus if ADA activity is suppressed, insulin sensitivity may be improved, cellular proliferation, inflammation and T-cell activity, all of which are associated with the pathophysiology of insulin resistance, can be affected . Therefore, insulin resistance may have an important relationship with ADA activity [7].

DPP-4 inhibitors and gliptins are a class of oral hypoglycemics that block DPP-4. They constitute a relatively new group of oral medications for the treatment of type-2 diabetes, which has become widely incorporated into clinical practice. At present, one of the approaches of prolonging the antidiabetic activity of GLP-1 is the application of DPP-4 inhibitors [8]. However, inhibition of ADA activity and regulation of the immune status by this multifaceted drug represents a supportive role in its involvement on immune function of these cases [9]. Keeping in view the above facts, this study was designed to evaluate the serum ADA levels in T2DM patients taking oral DPP-4 inhibitors in comparison to cases on other oral antidiabetic drugs.

Screening of the cases were done as per the guidelines based on the American Diabetic Association Criteria [10]. All the subjects were in the age group of 35-65 years. 96 clinically diagnosed T2DM cases, out of which 50 cases (group-1) on sulfonylurea and metformin and 46 patients (group-2) on a triple drug therapy comprising of sulfonylurea + metformin and DPP-4 inhibitors were included. 46 age- and sex-matched healthy subjects were selected as controls. Type-1 diabetes mellitus patients, gestational diabetes cases, type-2 diabetics on insulin treatment or patients with any other concurrent chronic conditions like cardiac diseases, tuberculosis, rheumatoid arthritis, gout, renal failure, viral or alcoholic liver disease or any other condition that alters the serum ADA levels were excluded from this study.

A thorough clinical examination and appropriate investigations were done before selecting the cases and controls. After obtaining informed consent, both the cases and controls were subjected to routine biochemical blood investigations like FBS, 2hr PPBS, urea ,creatinine using Vitros Fusion, Johnson & Johnson Autoanalyser and HbA1c by HPLC method using D-10 HbA1c analyzer (Biorad). Serum ADA activity was estimated by the method of Guisti and Galanti [11]. Ammonia liberated by reaction of ADA on adenosine forms an intensely blue coloured indophenol complex with sodium hypochlorite and phenol in alkaline solution. The intensity of the colour formed is directly propotional to the amount of ADA present in the sample, the absorbance was measured spectrophotometrically at 635nm. One unit of ADA is defined as the amount of enzyme required to release 1mmol of ammonia/min from adenosine at standard assay conditions. Results were expressed as international unit of enzyme activity of serum. Results were expressed in mean ± SD. Statistical analysis of results was done using student’s ‘t’ test.

Table 2: Comparison of HbA1c and serum ADA between cases. 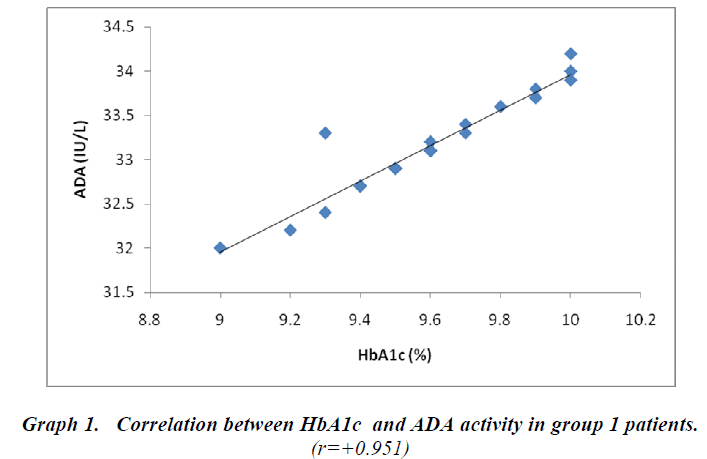 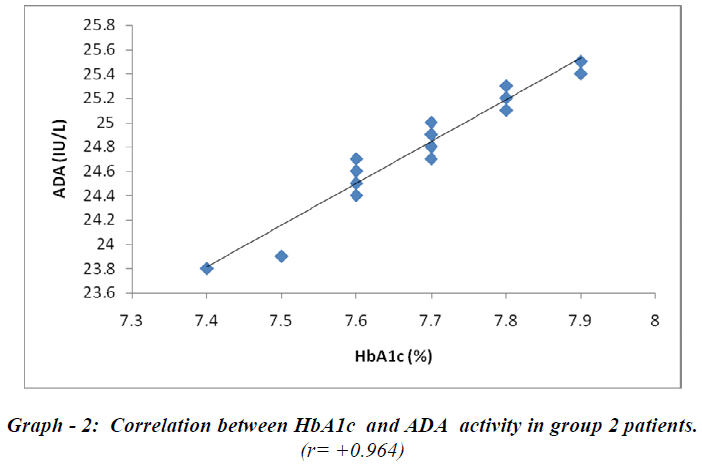 Diabetes mellitus is a common endocrine metabolic disorder, which is a leading cause of death worldwide. It is characterized by hyperglycemia resulting from variable interaction of hereditary and environmental factors and is due to a combination of insulin resistance and/or defective secretion of insulin by pancreatic beta cells [12]. Adenosine deaminase is involved in nucleic acid metabolism. Its main biological activity is detected in T- lymphocyte function and it plays a crucial role in lymphocyte proliferation and differentiation [13]. Therefore, it is considered as a good marker of CMI [14] and also glycemic status where it was observed that GLUT 4 receptors are downregulated in the absence of adenosine indicating it as one of the reasons for insulin resistance [15]. Immunological disturbances of cell- mediated origin are believed to develop from T-lymphocyte dysfunction. In vitro studies have implicated that in T2DM, inappropriate immune responses may result from defects in the action of insulin required for the function of T-lymphocytes [16].

Increased serum level of ADA activity was observed in diabetics [2,4,17,18], which corroborated with the findings of the present study. It is also thought that this deranged immunity may originate from antibody- dependant cellular cytotoxic responses, which are believed to target insulin [19], that has control over T lymphocyte function [16]. There are two different types of ADA’s: ADA1 and ADA2. ADA1 is present in the cytoplasm, and also on the cell surface. Ecto-ADA1 is anchored on the T-cell surface by integrating with CD26 [DPP-4. E.C 3.4.14.5] [20]. ADA degrades adenosine, which inhibits the proliferation of T-cells. Hence this interaction of DPP-4 with ADA and the rearrangement of ADA on the cell membrane can lead to the increase in T-cell proliferation and cytokine synthesis due to ADA activity on the cell membrane [21].

Although DPP-4 is clearly a critical molecule for inactivation of GLP-1, GLP-2 and gastric inhibitory peptide( GIP), a major question surrounding the emerging use of DPP-4 inhibitors, primarily for the treatment of T2DM, is related to the potential effects of these inhibitors on immune function. Related studies confirming the efficacy of DPP-4 inhibitors on the immune system in diabetes have been carried out [24,25]. This is in accordance with our observations which reveals that patients taking addon gliptins have the ability to alter hyperglycemia by decreasing HbA1c as well as ADA levels through modulating the immune status when compared with cases on other oral anti-diabetic drugs.

The contribution of participants who supported the study is duly acknowledged.