Effect of different doses of hydrocortisone on rat with septic encephalopathy

Background: This work was to investigate the effect of different doses of hydrocortisone (HC) on rats with septic encephalopathy.

Conclusion: HC decreased serum NES, lessened brain water content and relieved pathological changes of brains, which indicate that HC is likely to protect brain injury caused by SE; besides, low dose of HC has the best efficacy and high dose of HC has the worst efficacy.

Septic encephalopathy (SE) defined by Bright in 1827 is a common disease in intensive care unit. The pathogenic mechanism of SE is not explicit. SE is considered as an inflammatory brain dysfunction syndrome without primary central nervous system inflammation [1-3]. It is reported that Glucocoticoid (GC) inhibited inflammatory mediators and inflammatory cells, stabilized lysosomes, and restored bloodbrain barrier. However, it is controversial that whether GC can protect or worsen brain injury. The effect of different doses of GC on brain injury is unclear [4-8]. This work applied LPS to induce SE model to investigate the effects of hydrocortisone on serum neuron-specific enolase (NSE), brain water content and brain pathological changes. This work was to investigate the effect of different doses of hydrocortisone (HC) on rats with septic encephalopathy.

Rats were housed in a temperature-controlled environment (18-22°C) with a 12 h light-dark cycle and allowed free access to food and water before the experiment. 12 h before experiment, rats were fasted and allowed free access to water. Rats were anesthetized with 10% urethane, 1 ml/kg, i.p. Under anesthesia, right groin were cut to expose tissues, muscles and arteria cruralis. Cannula were inserted into arteria cruralis to monitor mean arterial pressure (MAP) through transducer connected with 404-1 monitoring instrument; LPS and HC were given through the femoral vein of the same side. LPS were administered at the dose of 25 mg/kg, then monitored MAP per 15 min. When MAP was lower by 20% of the normal value, the model was successfully established, which MAP is the shock point. After that, MAP was recorded per 30 min until the cannula was blocked.

First, Serum sample: 6 h after the model, 0.8 mL blood was drawn by femoral vein and then centrifuged at the speed of 2500 rpm for 5 min, and the serum was stored at -70 °C for serum NSE analysis by ELISA. Second, samples for pathological analysis: After rats were sacrificed, brains were collected. The right hemisphere was used for water content test and the left hemisphere was immersed in 4% formaldehyde for 4 days. Then tissues were dehydrated, embedded by paraffin and then cut into 5 μm slices for HE analysis. The scores of pathological changes were as Bogdansk (shown in Table 1) [2]. Third, brain water content analysis: The right hemisphere was weighed (wet weight), and it was dehydrated in 80°C until the weight is still (the difference is within 0.2 mg), then the brain was weighed (dry weight). The brain water content (%)=(wet weight-dry weight)/wet weight × 100%. Fourth, two left hemisphere samples in every group were immersed inglutaraldehyde for electron microscope examination.

Except sham group, the normal MAP and MAP in shock point of other groups had significantly difference (P<0.05). 1.5-2 h after LPS was administered, MAP was decreased by 20% of the normal value (P<0.05). The MAP of sham group maintained the same level during the whole experiment (shown in Table 2). 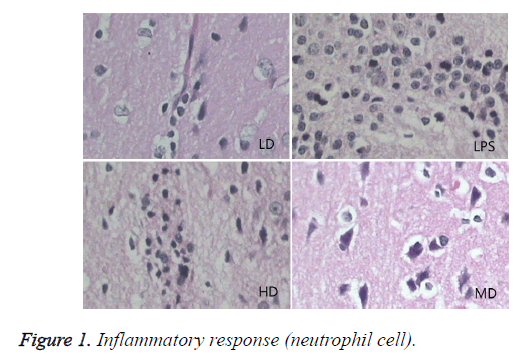 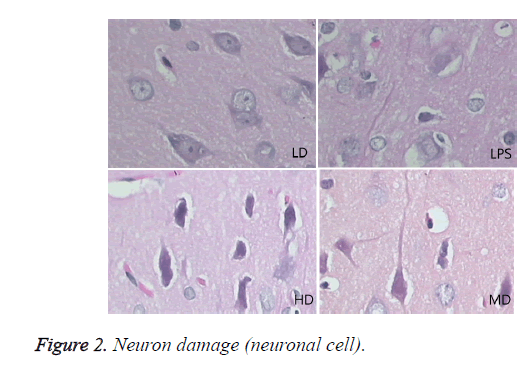 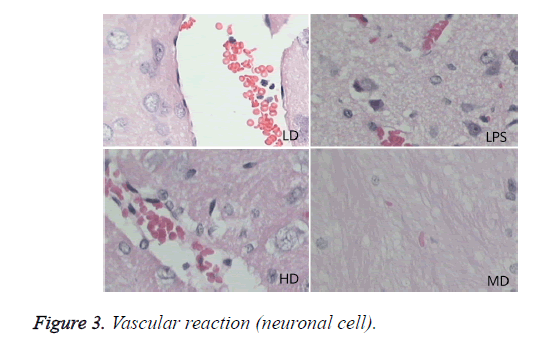 In LPS group, BBB was destroyed, endothelium was swollen, thrombosis in vessels was observed, basement of vessels was swollen and mitochondria in neuronal cytoplasm were distorted. In sham group, endothelium was intact without vacuole and swelling. The characteristics of HD group were similar with LPS group. LD group had a little neuronal swelling and BBB dysfunction (Figure 4). 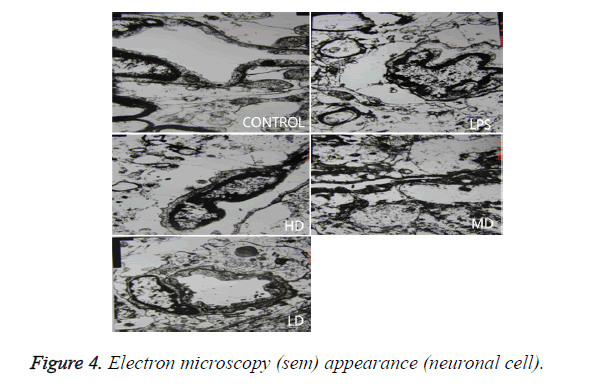 It has been reported that SE induced the up-regulation of TNF-a, IL-1, IL-2, IL-6, INOS, and adhesion cytokines in brains.

Endotoxin (LPS) activates microglia through two mechanisms: (1) Macrophages induce brain microvessel to induce Arachidonic Acid (AA), then AA in the parenchyma affects microglia through IL-1. The mRNA of AA receptor was proved to exist in brain endothelium [14]. (2) Cytokines released by macrophage or microglia in choroid plexus enter cerebrospinal fluid (CSF), and they may enter parenchyma to activate microglia. In vitro study showed that TNF-α and IL-1β could activate microglia [15], and TNF-α and IL-1β in parenchyma and CSF were up-regulated in SE [16].

This study investigated the brain inflammatory response by injecting LPS peripherally, and found that activated microglia or reactive microglia took part in this process. The inflammatory cells infiltrated in to brains, disintegrated, and released enzymes that liquefied tissues, which led to focal abscess. Sharshar found that micro abscess formation is the possible pathologic factors of SE, because micro abscess can not only directly injure neuronal cells, but also indirectly damage neuronal cells through inflammatory mediators [17,18]. Studies of imaging had the consistent results. Finelli observed the characteristics of brain of SE by MRI in a SE patient and found that FLAIR in bilateral basal ganglia, cerebellum, brainstem and temporal lobe were abnormal [19]. Autopsy confirmed that bilateral basal ganglia had infarction softening lesion, and caudate nucleus had decolonization. Besides, infarction existed in the neuronal necrotic lesion, accompanied with acute inflammatory response, and the injury was similar with abscess [17-19].

After healthy volunteers were injected LPS, their CBF declined significantly [20], and the microcirculation was damaged. Animal experiment found that 8h after swine peritonitis sepsis vessels around cortex had significantly swollen; the foot process of astrocytes was broken and was separated with endothelium [21]. Red cells exudates and micro-thrombosis formation were related with decreased blood flow speed, BBB dysfunction and coagulopathy. This study found there is red cells exudates and micro-thrombosis formation in brains. All above injury will limit the transport of oxygen, nutrients and metabolites between brain and blood, which will disturb homeostasis of brain. This study demonstrated that SE induced swollen cerebral blood vessel, BBB dysfunction, excessive inflammatory response, neuronal death and mitochondria injury. Low dose of GC can ameliorate brain inflammatory injury and restored neuronal injury, but high dose of GC cannot improve the injury induced by SE.

GC is an anti-inflammatory agent of endogenous broad spectrum through regulating the production and activity of cytokines. However, the therapeutic effects of GC in SE are still controversial. Bbecky A. hypothesized that high dose HC worsened brain injury via excitatory amino acid [8]. Meanwhile, Klaus Dinkel found that HC relieved hippocampus cell injury in encephalitis [4]. There were evidences that proved GC worsened cerebral infarction and encephalitis induced by HIV [5,6]. Besides, Zysk observed that Dexamethasone decreased the injury caused by encephalitis [7].

It was believed that the side effects of cortisol were due to peripheral cortisol resistance or related to RAI [25]. The possible mechanism of peripheral cortisol resistance is GR abnormity. The less GR, more tissues collapsed, and higher mortality [26,27]. Therefore, the level of GR and its affinity is the key point to exert the effects of GC. During SE GR decreases, therefore, replenishment of exogenous GC properly increases cortisol level, which is beneficial to restore stress response [22]. Different kinds of cells have various level of GR [28,29]. The high level of GC in plasma down-regulates GR. The phosphorylation of GR decreases the level and the activity of GR [30]. The genome of GR demonstrated that GR has the domain down-regulating gene expression that is dependent of hormones [31]. Therefore, the excessive amount of GC decreases GR. It was reported that Dexamethason inhibited the expression level of GR time-dependently and concentrationdependently in vitro [32]. Therefore, excessive GC may not have high efficacy of anti-inflammation for the inhibitory effects of GR [33]. It was proved that low dose HC increased serum TNF-α and IL-10 via immuno-suppression, and lessened inflammatory response, which showed that HC had supportive therapeutic efficacy to infected shock [34]. This study revealed that low dose HC ameliorated the brain injury induced by SE via relieving the brain edema, inflammatory response, neuronal injury and vessel injury. We speculated that HC protected brain injury in SE by up-regulating glucocoticoid and inhibiting inflammatory response.