Effect of different ablation time of ns-pulsed laser on the synthesis of silver nanoparticles in liquid.

In the present report, we have studied the effect of nanosecond pulsed laser irradiation time on the particle abundance, morphology, and optical properties of silver nanoparticles (Ag-NPs). High-resolution transmission electron microscopy, selected area diffraction pattern, and UV-visible absorption spectroscopy were used to characterize morphological, structural, and optical properties of the Ag-NPs. The prolonged laser irradiation above 60 minutes demonstrates the melting and diffusion-induced aggregation of Ag-NPs. The statistical evaluation of various particles under different irradiation durations reveals uniform and monodispersed particle distribution for only 60 min of ablation duration.

The recent surge in the intensive investigation to obtain colloidal noble metal nanoparticles arises due to the size-dependent optical, electrical, and physicochemical properties caused by the high surface-to-volume ratio[1,2]. The red or yellow color indicates colloidal gold and Ag-NPs, observed by the naked eye even at pico-molar concentration, resulting from absorption and scattering of light through these gold and Ag-NPs [3]. Ag-NPs are widely explored in various areas such as optoelectronic, biological labeling, surface-enhanced Raman spectroscopy, clad-modified optical fiber sensors, antibacterial and photocatalysis[2,4-8]. Different chemical processes, including biological synthesis, ultrasonic treatment, microwave-assisted techniques, and solvothermal, have been explored in the last two decades[1,5,9]. Previously, several researchers employed the naturally occurring biological extract, micro-organisms such as bacteria, fungus, and Curcuma longa tuber powder as reductants and as surfactant molecules for producing Ag-NPs [1,5,7,10]. A typical chemical method proceeds through reducing silver salts under borohydride (strong reductants) and sodium citrate (weak reductants). The reductants usually show less control over the particle size distribution, such as borohydride results in smaller particle sizes but fail to increase the particle as expected. In comparison, sodium citrate demonstrates the converse effects as borohydride. Thus a facile and green method is needed to obtain controlled growth, stable with unique functional properties colloidal nanoparticles.

Apart from the chemical methods, the physical method widely used for synthesizing Ag-NPs is pulsed laser ablation of solid or metal salt in solution [11]. The pulsed laser ablation in liquid (PLAL) is a well-known green, inexpensive, facile physical method for fabricating ultrapure colloidal Ag-NPs[4,12,13]. Initially, the Ag-NPs were prepared by the laser ablating the solver target with/without a surfactant-containing solution. Later, pulsed laser ablation of silver salts in solution was used to generate Ag-NPs [4]. Although PLAL is regarded as easy and green, it demonstrates uncontrollable growth, a significant amount of polydispersity in shape and size, etc. [11]. The recent investigation reveals that laser irradiation can be used for controlled resizing and reshaping Ag-NPs through melting and fragmentation mechanism.

This work aims to study the formation and resize Ag-NPs under the laser irradiation of silver salt in the presence of surfactant. The dependence of particle growth and resizing was studied for different ablation durations of the silver salt aqueous solution under a constant surfactant solution.

In the current studies, commercially available silver nitrate and sodium dodecyl sulphate SDS (AgNO3, NaCl2H25SO4, Alfa Aesar, and spectrum India) were used without any further purification in this study. 0.1M (5 ml water) of SDS was mixed with 0.01M (50 ml water) of silver nitrate to obtain a standard silver nitrate solution. Then, the silver nitrate solution was irradiated by an ns-pulsed laser. The silver nanoparticles were synthesized using Nd: YAG pulsed laser (Quanta Ray Spectra-Physics 230-10). The laser was operated at 1064 nm wavelength, pulse duration of 10 ns, and repetition rate of 10 Hz with output energy constant energy at 500 mJ of unfocussed beam calculated at the wall of the glass beaker. Four different samples were prepared at continuous energy (500 mJ) with 20, 40, 60, and 80 minutes of ablation duration of the same samples.

Figure 1 shows the experimental schematic diagram of pulsed laser ablation in liquid technique for the synthesized Ag-NPs. The inset of figure 1 shows the digital snapshot image of colloidal Ag-NPs under different ablation duration (0, 20, 40, 60, and 80 min). After the 20 min of laser ablation, the color of ablating silver nitrate solution transformed into the brownish-yellows, which confirms the formation of Ag-NPs. As further laser ablation progress, the intensity of colloidal Ag-NPs increases, which could arise to increase Ag-NPs concentration in colloidal solution (Figure 1). Figure 2 demonstrates the HRTEM images of Ag-NPs synthesized under the different ablation duration. The morphological studies of as-synthesized Ag-NPs reveal the formation of uniform and monodispersed silver particles in the first 20 nm of laser ablation. In the next 40, 60, and 80 minutes of laser ablation, aggregation and transformation of Ag-NPs were observed. It is also evident from the HRTEM images that the Ag-NPs get aggregated through the melting and fusion of smaller size particles (Figure 3). The statistical evaluation that reveals the average particle size of Ag-NPs is found to be around 2.5, 8.4, 7.3, and 11.7 nm, respectively. Thus, it was observed that an increased ablation duration increased in average particle size. However, for 40 of laser ablation duration, the average particle size of Ag-NPs is slightly higher than 60 min, except for the broad particle size distribution. While the Ag-NPs are under the 20 and 60 min ablation duration, the particle distribution is highly monodispersed and uniform. At the end of 80 min of ablation, the number of aggregated particles significantly increased. The selected area diffraction (SAED) pattern analysis of as-synthesized Ag-NPs reveals diffused ring that corresponds to the mixed amorphous or polycrystalline crystal structure (Figure 4) [10,14]. The measured distance between the two reflection points in each SAED. The pattern is found to be around 0.75-0.80 nm-1, which is close to the lattice spacing of 0.23 nm of the FCC crystal structure of Ag-NPs [10]. At the same time, the lattice spacing (0.25 0.02 nm) was estimated from the SAED Pattern displays a slightly larger than 17% (Table 1). In general, several researchers have also observed the expansion and contraction of lattice spacing in various kinds of nanostructure materials. 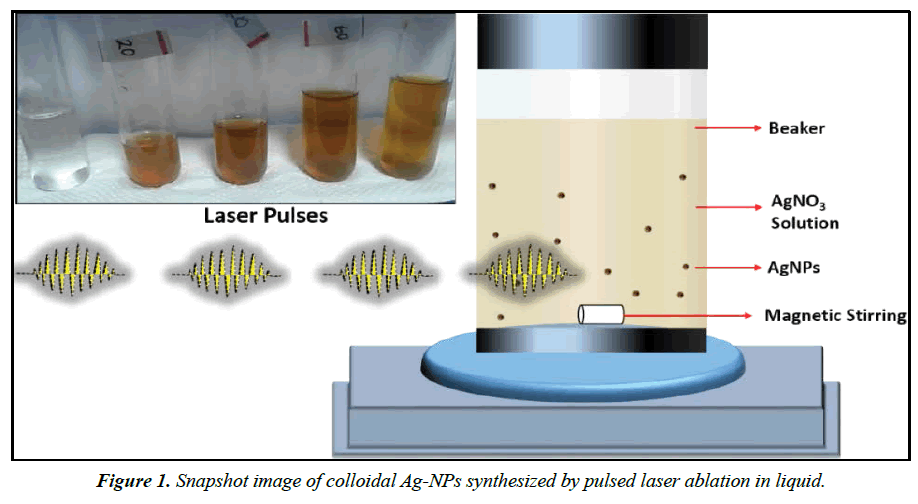 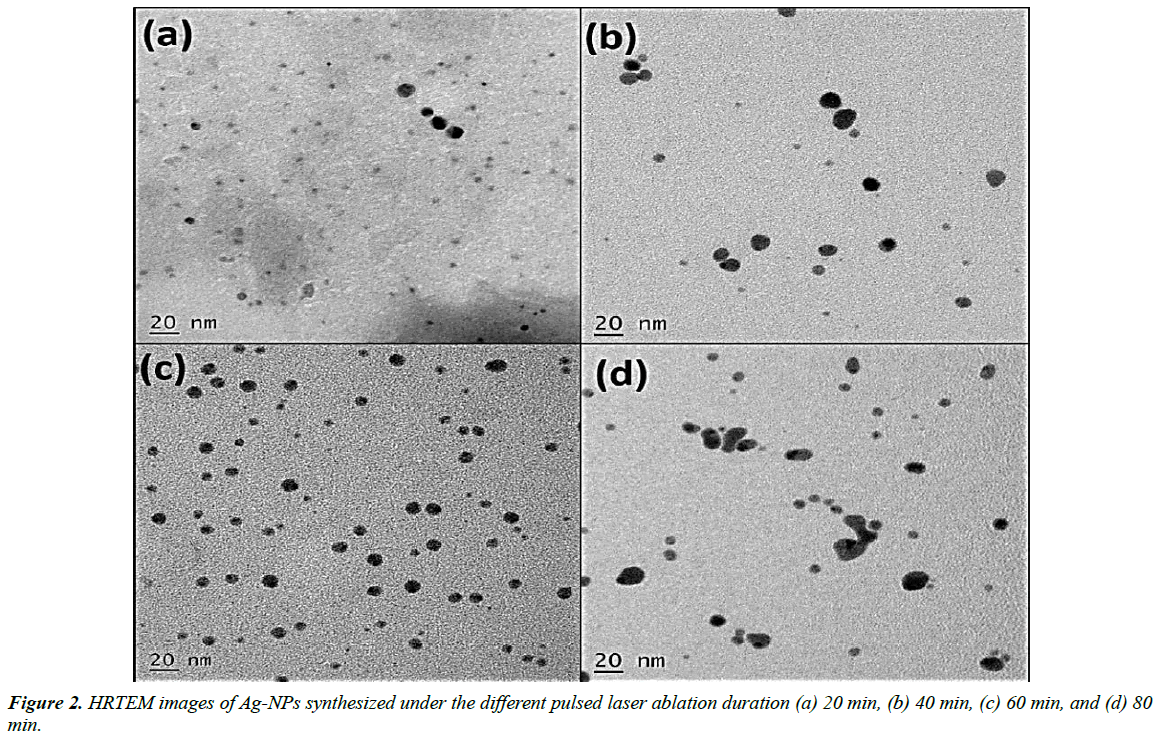 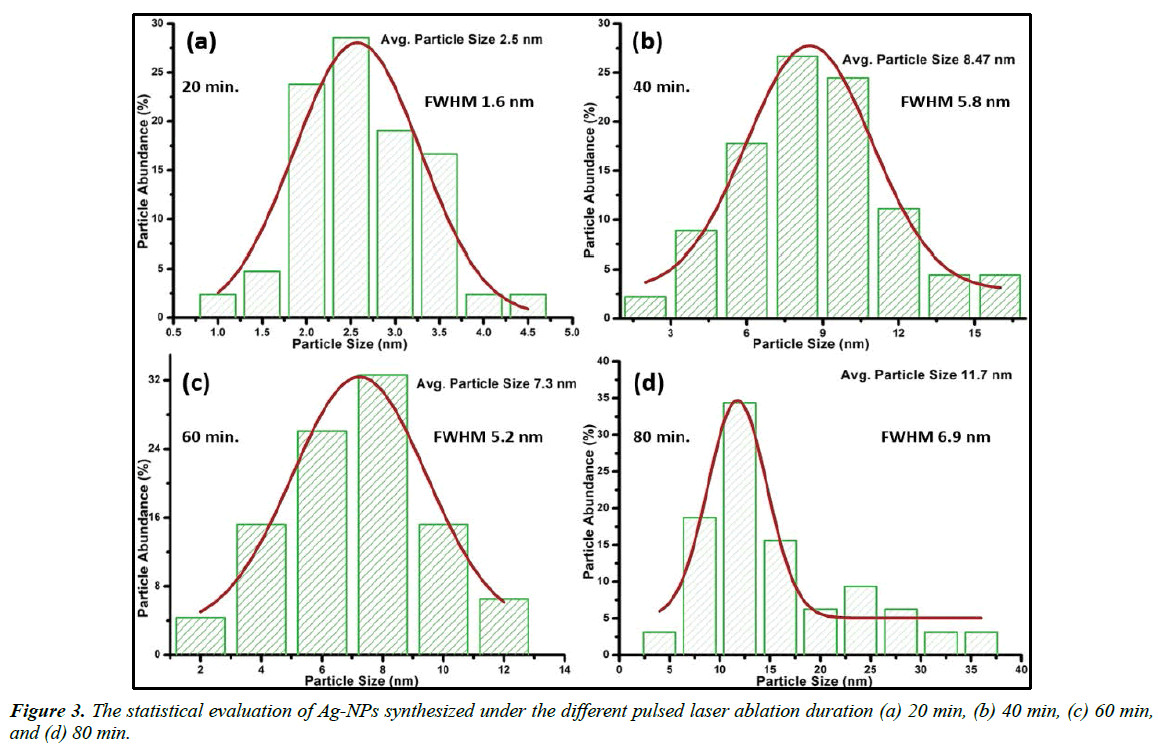 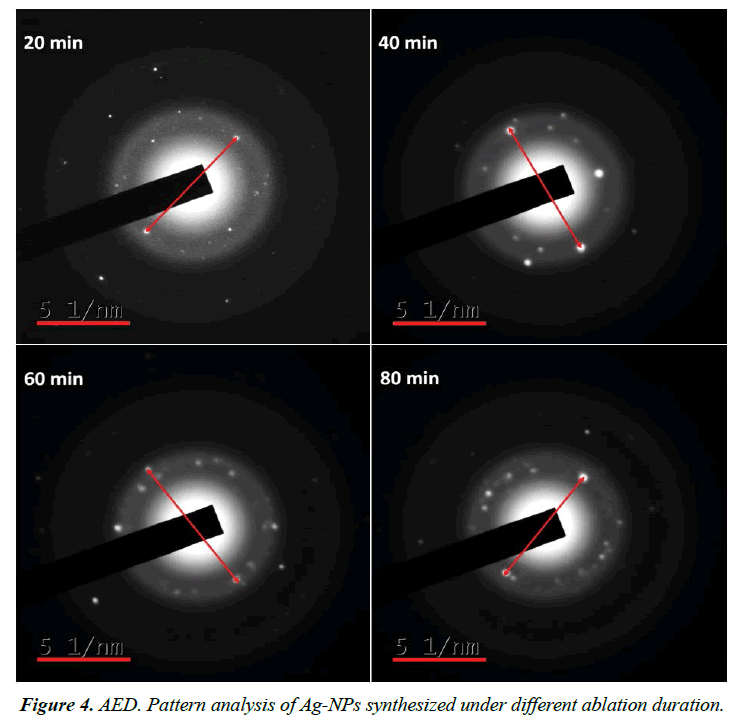 Figure 5a shows the absorbance spectra of Ag-NPs for different ablation duration. It is noted that the intensity of absorbance gradually increases as the ablation duration increases. The appearance of the single peak positioned at 410 nm corresponds to the longitudinal plasmon resonance indicated the nearly spherical shape of Ag-NPs [15,16]. In the case of the nonspherical (ellipsoidal) nanoparticles, two peaks exist instead of a single peak [15]. The laser irradiation can effectively change the morphology of the nanoparticles, but such a thing does not appear in the UV absorption spectra. After the laser irradiation for 20, 40, 60, and 80 min, no such shift occurs absorbance band is observed. Thus it indicated that the morphology of the nanoparticles had remained the same in all cases. The peak enhancement in the longitudinal direction supports the change in particles size with the increase in the irradiation time unless the dielectric constant of the media is kept constant. In PLA, the light is mainly scattered on the surface of the particles; therefore, the surface plasmon frequency of the free electron oscillation is shifted from the UV region to the visible region of the spectrum. The plasmon frequency of nanoparticles is in the visible part only for the three metals Au, Ag, and Cu nanoparticles; for others, it shifts to the UV regions [17].

Figure 5b demonstrated Ag-NPs direct optical bandgap, which is obtained from extrapolating the Tauc plot. The absorption coefficient of absorbance spectra is related to the optical band gap that has been calculated by using the relation

Where α is the absorption coefficient,

is the photon energy,

is the plank constant and

is the direct optical bandgap of Ag- NPs. Figure 5b shows the variation of

with the photon energy

. The linear region of the curve was extrapolated at the energy axis to determine the bandgap of Ag-NPs. The observed bandgap of Ag-NPs is around 2.09 to 2.44 eV, which is concurrent with previously reported results [18].

Over the decades, several researchers proposed the mechanism for forming Ag-NPs under the pulsed laser irradiation of silver salt in water [19,20]. Figure 6 demostratate formation and transformation of Ag-NPs under the ns-pulsed laser ablation. The effect of ablation duration shown the basic Ag-NPs formation process proceed through in a sequential mammber. The dynamic formation mechanism of Ag-NPs under the PLAL method comprises of three stages (I) generation of silver plume consisting of silver atoms, (II) embryonic silver nuclei growth under the plasma plume, and (III) supply of silver atoms through diffusion along with capping of Ag-NPs surfactant [20]. The SDS surfactant covering over the Ag-NPs avoids the reaggregation Ag-NPs. The neutral silver atoms were formed by absorbing the solvated electron and hydrogen radical ions during reducing silver ions[19]. The photolysis of water molecules via the multiphoton absorption process had such solvated electron and hydrogen radicals. The absorbed energy (7 eV) exceeds the 6.7 eV due to water's photodecomposition into solvated e- aq, OHaq, and Haq radical [21,22]. These radical species are much shorter in their lifetime. However, these species can quickly reduce the silver ions into their zero valence state through the following scheme. 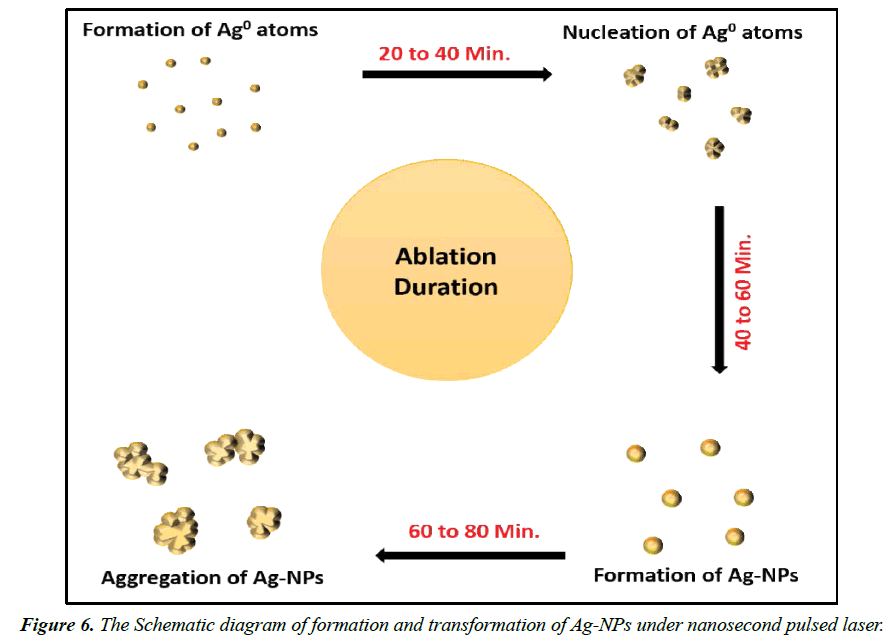 Figure 6: The Schematic diagram of formation and transformation of Ag-NPs under nanosecond pulsed laser.

The silver nuclei absorb the nearest neutral silver ions supplied by the silver salt's laser reduction. Further, the growth of Ag- NPs competes with termination steps by absorbing SDS anions over the Ag-NPs [22]. Herein, the HRTEM micrograph images also reveal, melting and diffusion of nearest Ag-NPs once the ablation process is inefficient to provide the continuous silver neutral atoms. Thus, the growth of silver nanoparticles superseded the typical silver neutral absorption process, which later proceeds through aggregation and silver nanoparticles.

There is no conflict of interest among the authors.