Diabetes mellitus (DM) is a chronic metabolic disorder due to either deficiency of insulin or subnormal function of insulin [1,2]. Glucose metabolism is primarily affected in DM as insulin is known to influence it in particular. Diabetic patients are prone to many diabetes induced life threatening complications such as neuropathy, retinopathy, nephropathy, cardiopathy and other micro or macro vascular complications [3,4]. Patients with uncontrolled blood glucose levels are particularly at high risk and consistent hyperglycemia plays an important role in the pathogenesis of diabetes induced complications [5]. Insulin, a peptide hormone which influences the glucose utilization by favoring action of various enzymes involved in glucose as well as glycogen metabolism [6,7]. Apart from insulin and other hypoglycemic agents, many herbal preparations have been tried to improve glucose utilization in DM [8-11]. Even the World Health Organization (WHO) has also recommended the evaluation of plants effectiveness in controlling rampant spreading of DM as we lack in safe modern drugs [12]. This has led to increasing demand for research on natural anti-diabetic products which produces minimal or no side effects [13]. Allium group of plants in general and garlic products in particular were proved to have beneficial effects in DM [14,15]. A modified disulphide, diacetodibutyl disulphide (DADBDS) been shown to produce significant hypoglycemic effects in alloxan diabetic rats [16]. Though it is known that garlic or one of its active principles, DADS as well as modified disulphide DADBDS may influence insulin action or increase insulin’s half-life, the actual mechanism of action in alloxan diabetic animals is still obscure [9,17]. Hence a study was undertaken to establish the possible influence of DADS on glucose utilization in isolated alloxan diabetic liver tissues and to compare this action of DADS with metformin (Dimethylbiguanide), which is a common drug used for the treatment of type-2 DM [18,19].

Healthy male Wistar rats (200 ± 50 g) were randomly selected from the Institutional Animal House facility and housed in polycarbonate cages under normal 12 h day-night cycle at temperature of 22 ± 2°C. The experiments were conducted as per the stipulations of CPCSEA under the supervision of Institutional Animal Ethics Committee (Permission No: BMCH/IAEC/04 Biochem/2015).

The selected rats were divided into four groups.

ii. Groups 2-4 each containing 6 rats, were induced diabetes by administering a single intra peritoneal injection of a freshly prepared aqueous solution of alloxan monohydrate (150 mg/kg b.w.) [20,21] in normal saline to the overnight fasted rats. The onset of diabetes was monitored 48 h after alloxan injection by using urine strips (Mission urine strips) and the animals that tested positive for glucose for 3 consecutive days were considered as diabetic rats to be employed in the present study. Later these alloxan induced diabetic rats (Groups 2-4) were maintained on stock lab diet and water ad libitum for 30 d.

Glycogen content and glycogen breakdown studies: The glycogen content and glycogen breakdown in groups 1-4 was estimated using 0.5 g of each liver tissue of these groups separately. The glycogen released by heating with strong alkali was precipitated with the addition of ethanol, sodium sulphate was used as a co-precipitant to give a quantitative yield of glycogen. The polysaccharide is then hydrolyzed with acid and the glucose released was estimated [25]. The amount of glycogen utilized was calculated by assessing the difference in glycogen content in pre and post incubation liver tissues.

Glucose utilization studies [23]: The glucose [26], lactate [27] contents of both pre and post incubated liver samples of groups 1-4 were estimated as narrated below.

Half gram (0.5 g) of groups 1-4 liver tissues were taken separately in incubation tubes and 1 ml of freshly prepared buffered glucose solution (0.1 g (%) glucose in phosphate buffer, pH 7.4) was added to all the tubes. For tube containing liver tissue of group 3 10 μl metformin (4 mg/g liver) and for the tube containing liver tissue of group 4 10 μl DADS (4 mg/g liver) was respectively added. To all the tubes 3.5 ml of 10% TCA (trichloro acetic acid) was added and the tubes were allowed to stand at room temperature for 15 min for protein precipitation. Then the contents of all the four tubes were thoroughly homogenized using Remi Homogenizer and centrifuged (3000 rpm) for 5 min. The clear supernatant obtained was employed for the estimation of glucose by Otoluidine method [26] and lactate by Barker and Summerson method after removing glucose and other interfering materials by the Van Slyke-Salkowski method of treatment with copper sulfate and calcium hydroxide [27]. The values obtained were considered as the pre-incubation values.

Similarly, for post-incubation levels of glucose and lactate, a 0.5 g each of groups 1-4 liver tissues were separately taken in incubation tubes and 1 ml of freshly prepared buffered glucose solution (0.1 g% glucose in phosphate buffer, pH 7.4) was added to all the tubes. For tube containing liver tissue of group 3 10 μl metformin (4 mg/g liver) and for the tube liver tissue of group 4 10 μl DADS (4 mg/g liver) was respectively added. All the tubes were incubated at 37°C in a thermostatically regulated water bath for 60 min. Later the tubes were processed to get the protein free supernatant as described above. The supernatants were employed for estimation of glucose [26] and lactate [27]. The values obtained were taken as post-incubation values.

Glucose utilized and lactate produced were calculated as follows:

The glucose that formed by liver glycogen breakdown during incubation period was taken into consideration in glucose utilization calculations.

Half gram (0.5 g) each of groups 1-4 liver tissues were taken separately in clean dry test tubes containing 1.0 ml phosphate buffer (pH 7.4). For tube containing liver tissue of group 3 10 μl metformin (4 mg/g liver) and for the tube containing liver tissue of group 4 10 μl DADS (4 mg/g liver) was respectively added. Then the contents were incubated for 60 min at 37°C in a thermostatically regulated water bath. At the end of the incubation period, 3.5 ml of phosphate buffer, pH 7.4, was added and the contents were homogenized for 5 min and centrifuged for 5 min at 3000 rpm. The supernatant was employed for the estimations of the enzyme activities (HK and G6PD).

The data was statistically analysed by one way ANOVA (Dunnet’s multiple comparison test) using software GraphPad InStat (Version-3). The results were expressed as mean ± SEM and values with p<0.05 were considered significant. 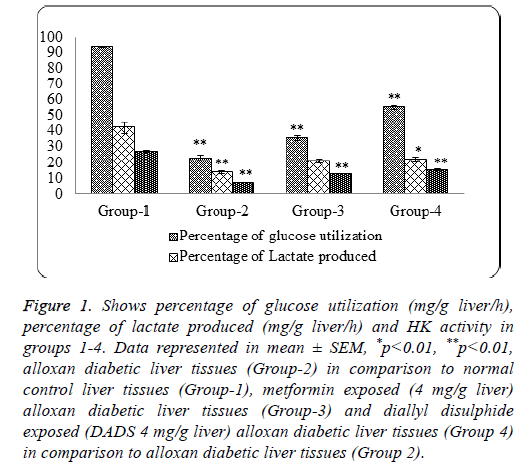 Table 3 gives the amount of lactate produced (mg/g liver) in all the four groups. The results indicate a significant decrease in lactate production (p<0.01) in group 2 as compared to group 1, whereas a significant raise (p<0.01) in groups 3 and 4 as compared to group 2, suggesting both metformin and DADS possibly influence glucose utilization through glycolytic pathway and the results indicate that DADS is equally good in influencing the glucose utilization through glycolytic pathway in liver, as compared to metformin.

In principle, any enzyme or protein having accessible thiol groups which are essential for its activity is capable of yielding itself to changes in cellular thiol-disulfide ratio thus making such enzymes or proteins for easy modulation [32]. This cellular thiol-disulfide balance can be altered by treating animals or isolated tissues with readily absorbable thiols or disulfides [32-34]. It is known that many enzymes particularly glycolytic kinases are thiol enzymes and are easily affected by changes in thiol-disufide balance [32,35-38]. In DM the tissue total-thiol concentration is reduced [8] there by creating disturbances in various metabolic pathways especially the pathways of carbohydrate metabolism.

DADS is an aliphatic low molecular weight disulphide, similar to any other disulphide, may undergo a degradation to produce respective thiols in liver tissue cells in presence of NADPH/GSH dependent reductase [39-41].

The thiols so produced as explained in the above reaction may alter the cellular thiol-disulphide ratio which is detrimental for the functioning of thiol enzymes involved in glucose metabolism. It is known that low molecular weight thiols influence the activity of certain glycolytic enzymes thus favor glucose utilization [44]. The allyl thiols, produced by the degradation of DADS are being low molecular weight thiols might have influenced glycolytic enzymes like HK, phospofructokinase and pyruvate kinase [32,35, 38], hence more glucose is utilized through glycolytic pathway in group 4 liver tissues. This is further evidenced by increased lactate production in group 4 liver tissues as compared to group 2 liver tissues (Table 3) indicating clearly the role of DADS in increasing glycolytic utilization of glucose.

DADS, similar to any other disulphide may undergo sulphydryl exchange reaction with cellular thiol proteins or thiol enzymes as depicted below [45,46].

The Protein Tyrosine Phosphatases (PTP’s), which are involved in end regulation insulin receptor triggered PTP’s and Insulin Receptor Substrates (IRS), are thiol enzymes [44] and DADS might undergo a similar sulfhydryl exchange reaction (as mentioned above) with PTP’s thereby inhibiting their action, hence PTP’s and other IRS may remain in the functioning state thereby enhancing glucose uptake and utilization.

DADS has been shown as a protein glycation inhibitor [13] may prevent insulin glycation, thereby enhances the life span of insulin and such an enhancement in group 4 may influence insulin life span, hence may cause increase glucose utilization and lactate production as observed in the present study. The raise in lactate production in group 4 which is in agreement with earlier studies [23] and is due to enhancement of glucose utilization through glycolytic pathway in group 4 as compared to group 2, which is further evidenced by a proportional raise in activity of HK, which is supposed to be a thiol enzyme and the thiols produced by degradation of DADS may influence its activity.

Metformin a commonly employed anti-diabetic drug was taken as standard to compare as DADS glucose-utilizationpromotional effects in alloxan diabetic liver tissues. In the present studies it is confirmed that DADS influence on glucose-utilization in alloxan diabetic liver and as depicted in the Figure 1, is quite comparable with the action of standard drug, metformin.

It can be concluded by the results obtained in the present studies that DADS at the dosage employed influenced total liver glucose utilization by improving glucose breakdown through glycolytic pathway as well as through HMP pathway suggesting its possible utility as an adjuvant hypoglycemic substance in diabetic condition. However, a detailed study with different dosages and a systematic clinical approach can throw further light on DADS use in DM.

The authors are indebted to the authorities of Saveetha University, Chennai and Subbaiah Institute of Medical Sciences, Shivamogga for the encouragement, facilities and support.