Effect of curcumin and curcumin nanoparticles against lead induced nephrotoxicity.

The aim of the present study was to examine the protective effect of curcumin (CUR) and curcumin nanoparticles (CURNPs) as antioxidants on the nephrotoxicity induced by lead (Pb). CUR (60 mg/kg b.w) and CURNPs (30 mg/kg b.w) were evaluated using Pb (30 mg/kg b.w.) induced oxidative renal damage in rats. Administration of Pb significantly (p<0.001) increased the levels of renal function test such as creatinine (CRN) and blood urea nitrogen (BUN) and uric acid (UA). Furthermore, Pb significantly decreased glutathione (GSH) levels, superoxide dismutase (SOD), glutathione reductase (GR), catalase (CAT) and glutathione peroxidase (GPx) activities (p<0.001). CUR and CURNPs displayed a renal protective effect as evident by significant decrease in CRN, BUN, UA levels and elevated the antioxidant status of renal tissues. The administration of Pb also induced histopathological changes in renal tissue; however, in groups treated by CUR and CURNPs, there was amelioration in pathological changes in renal tissue. These findings suggest that Nano CUR could be a potential compound in combating the oxidative damage of renal tissue as it increases curcumin bioavailability.

Lead (Pb) is non-essential heavy metal and is toxic, ubiquitous and persistent in the environment. Many heavy metals, including Pb, enhance lipid peroxidation, decrease the saturated fatty acids and increase the unsaturated fatty acid contents of membranes and are known to induce over production of reactive oxygen species (ROS) [1]. Also, it has been shown to enhance the production of ROS in a variety of cells resulting in oxidative stress [2]. Lead toxicity depends on its chemical form administrated to the animal, the route of administration and the frequency and duration administered. The toxicity of lead depends on route of exposure level of intake, solubility, duration of exposure, frequency of intake, absorption rate, mechanisms and efficiency of excretion. The inhalation of lead could permanently lower intelligence quotient (IQ), damage emotional stability and cause hyperactivity, and hearing loss [3-5].

Curcumin (1,7-bis (4-hydroxy-3-methoxy-phenyl)-1, 6- heptadiene-3, 5-dione; diferuloylmethane) is a hydrophobic polyphenol, yellow, natural, lipid-soluble compound potent tumor-inhibitory agent with chemopreventive properties against intestinal and colon cancers [6]. However, the therapeutic applications of curcumin in humans are limited by its high metabolic instability as well as poor absorption and bioavailability.

Synthetic analogs and formulations of curcumin have been developed, including its combination with polymeric micelles or nanoparticle-based encapsulation that exhibit greater chemical stability, systemic bioavailability and antitumor activities as reported earlier [7]. Therefore, the purpose of this study was to study the effect of CUR and nano curcumin (Nano Cur) particles on Pb induced renal toxicity.

Lead acetate and Curcumin were purchased from Sigma- Aldrich, USA. All other chemicals used in the study were of analytical grade, and were from Sigma and Merck.

To prepare curcumin nanoparticles, 1M curcumin with low solubility in water was mixed with 4 M sodium bicarbonate buffer and grinded. The color of curcumin changed from yellow to red as a result of the curcumin sodium salt formation. Curcumin nanoparticles were then dispersed into 50 ml of distilled water making aqueous solution which was filled in a reactor that was immersed in a water bath adjusted at 11°C. Afterwards, sonication was applied in continuous mode with thin and indented bottom for uniform and more efficient energy transmission.

Male wistar rats weighing approximately 200-230 g were obtained. The animals were acclimatized for a month prior to experiments. The institutional ethics committee approved the experimental protocols. All the animals used in this study were placed in cages in an air conditioned room maintained at a temperature of 25°C ± 30°C and 12 h light/dark schedule.

Animal Treatments: Different groups of animals were used to study the effects of DAS on lead-induced oxidative stress. Rats were randomly divided into 6 groups (6 rats in each group). Group I received saline injection i.p. (0.85% NaCl) at a dose of 10 ml/kg bodyweight. Group II received a single i.p. injection of lead (Pb) dissolved in distill water at a dose of 30 mg/kg bodyweight [8,9]. Groups III and IV received pretreatment with CUR and CURNP i.p. once a day for 7 days at a dose of 60 and 30 mg/kg body weight respectively. Group V received CUR (30 mg/kg b.w orally for seven days)+Pb (30 mg/kg b.w i.p), Group VI was treated with CURNPs (60 mg/kg b.w orally for seven days)+Pb (30 mg/kg b.w i.p). The dose of CUR and CURNP was selected on the basis of previous published data [10,11]. Kidneys were carefully removed, washed in ice-cold 50 mM Tris-HCl, pH 7.4. and homogenized immediately to give 10% (w/v) homogenate in ice-cold medium that contained 50 mM Tris–HCl, pH 7.4. The homogenates were centrifuged at 3000 rpm for 10 min at 4°C. The supernatants were used for the various biochemical determinations. The total protein content of the homogenized tissue was determined by the method of [12] using bovine serum albumin as a standard.

Results were expressed as the mean ± standard error of the mean (SEM). One-way ANOVA was applied to test for the significance of biochemical data of the different groups. Significance is set at p<0.05.

Table 1: Effect of CUR and CURNPs on biochemical parameters in serum.

Table 2: Effect of CUR and CURNPs on Pb-induced antioxidant status. 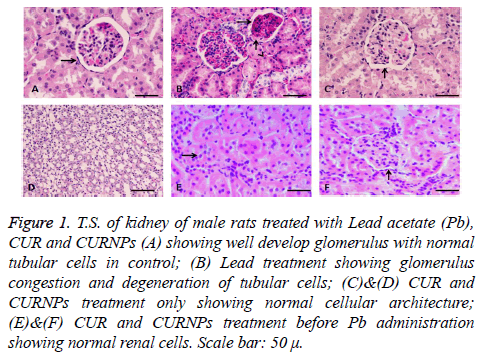 Lead (Pb) is an environmental and industrial pollutant, and is a major public health problem throughout the world. Potential involvement of the cell’s antioxidant capacity failure in the pathogenesis of Pb poisoning suggests that exogenous antioxidants may play an effective protective effect [8,9]. After absorption, Pb accumulates primarily in the kidneys [17], making it a critical target organ for Pb toxicity. Accumulation of Pb in kidneys impairs the endogenous antioxidant defense system by inhibiting the main antioxidant enzymes (superoxide dismutase [SOD], glutathione peroxidase [GPX], catalase [CAT], glutathione reductase [GR], and glutathione S-transferase [GST]). It also depletes reduced glutathione (GSH), the most important intracellular non-enzymatic antioxidant [17].

In the present study, treatment with Pb significantly decreased the activities of SOD, GPx, and CAT kidney tissue. It has been shown that Pb directly alters antioxidant activities by irreversible direct binding to functional sulfhydryl (SH) groups of several enzymes such as SOD, GPx, CAT, and GR [18]. Because Pb interferes with the metabolism of essential trace elements such as copper, zinc, selenium, and iron needed for proper molecular structure and enzymatic activity, the antioxidant enzymes could be a potential target for Pb toxicity. The decrease in antioxidant enzyme activities may be explained by the down regulation of antioxidant enzyme mRNA expression. As for antioxidant enzymes, Pb can damage GSH directly and/or indirectly. The reduction in concentration of GSH may be due to the high affinity of Pb to the SH-groups of this tripeptide, thereby interfering with its antioxidant activity [18]. Pb can also decrease the level of GSH by inhibiting the activities of GSH metabolizing enzymes, such as GR, GST, and glucose-6-phosphate dehydrogenase, by blocking their SH groups [19]. Our earlier studies have shown protective effect of natural polyphenols and antioxidants on toxin mediated toxicity in vivo [20-22]. Extensive research is now focusing on herbal products as alternative medicines and a number of studies showed the beneficial effects of curcumin [23] which undergoes metabolism upon oral administration in animals and almost each and every metabolite produced has some beneficial effect apart from their antioxidant property.

In this study, CUR and CURNPs with Pb exposed group’s exerted amelioration in treated rats. This antioxidant and ROS scavenging effects of curcumin is only due to its phenolic (- OH) group, which would inhibit the -SH group oxidation and block thiol depletion and protects the oxidation of protein [24]. Further it also enhances the activities of some antioxidant enzymes such as SOD, catalase and GPx. It is clear from various studies that curcumin, like many natural products, has many biological activities and is relatively safe and well-tolerated. The therapeutic effects of curcumin are mediated partially through its antioxidant and anti-inflammatory properties. Thus a safe toxicological profile of curcumin nanoparticles, indicate their potential for evaluation in in vivo efficacy models and further in human trials to establish their clinical benefits as an effective therapy against pathologies.

This research project was supported by the ‘‘Research Center of the Center for Female Scientific and Medical Colleges’’, Deanship of Scientific Research, King Saud University, Riyadh, Saudi Arabia.