Centella asiatica L. belongs to the family Umbellifera. It is known as mandukparni or Indian Penny Wort. It is found in swampy areas of India, commonly found as a weed in crop fields and in other waste places throughout India up to an altitude of 600 m [1]. The crude extract of C. asiatica and the products derived from it have various pharmacological properties [2,3,4,5,6]. The crude extract of C. asiatica was shown to be non-toxic in normal human lymphocytes [7], and reduced the genotoxic effects of methyl methanesulphonate and cyclophosphamide in cultured human lymphocytes [8].

Conjugated estrogens, have been listed in the fourth annual report on carcinogenesis (ROC), as human carcinogens [9]. A number of and mestranolβindividual steroidal estrogens including estradiol-17 were listed in the ROC as reasonably anticipated human carcinogens [9]. Steroidal estrogens are placed in a Group 1 as carcinogenic to humans, on the basis of sufficient evidence of carcinogenicity in humans [10]. Ethinylestradiol is used with various progestogens, in combined oral contraceptive formulations [11]. There are sufficient evidences for the carcinogenicity of ethinylestradiol in experimental animals [12]. It has also been reported to cause aneuploidy in Chinese Hamster DON Cells in vitro [13], aneuploidy and polyploidy both, in V79 cells in vitro Estrogens are used in the treatment of sexual and metabolic disorders and also in oral contraceptives [15]. Prolonged use of estrogens has been reported to develop various types of malignancies in human and experimental animals [15]. The genotoxic effects of estrogens/ progestins can be reduced by the use of antioxidants [16-22] and natural plant products [23-28]. The genotoxicity testing provides human a risk assessment. An increase in the frequency of chromosomal aberrations in peripheral blood lymphocytes is associated with an increased overall risk of cancer [29,30].

Any reduction in the genotoxicity gives an indication of the lesser possibility of carcinogenesis [31]. The majority of populations use traditionally natural preparations derived from the plant material for the treatment of various diseases, and for that reason it becomes necessary to assess the mutagenic potential or modulating action of plant extract in combination with other substances. In earlier study ethinylestradiol was found to be genotoxic at 5 and 10 μM [32]. The herbal preparations can be useful in taking care of the genotoxic effects of certain drugs. The aim of the present work was to study the effect of C. asiatica L. extract against the genotoxic doses of ethinylestradiol.

C. asiatica L. leaves were collected from the nursery of Forest Research Institute (FRI), Dehradun (UA) and were air dried and ground to fine powder. Extraction was performed by soaking samples (30 g of dry weight) in 300 ml of acetone for 8-10h at 40-60°C in Soxhlet’s apparatus. After filtration, the excess of solvent was removed by rotatory evaporator. The extract concentrations of 1.075×10-4, 2.127×10-4 and 3.15×10-4 g/ml of culture medium were established [8].

Duplicate peripheral blood cultures were prepared according to Carballo, Alvarez, Boveris. [33]. Briefly, heaprinized blood samples (0.5 ml), were obtained from healthy female donors and were placed in a sterile culture bottles containing 7 ml of RPMI-1640 medium, supplementd with fetal calf serum (1.5 ml), antibiotic-antimycotic mixture (1.0 ml) and phytohaemagglutinin (0.1 ml). The culture bottles were kept in an incubator at 37°C for 24 h.

After 24 h, 5 μM of ethinylestradiol treatment (dissolved in dimethylsulphoxide, 5 μl/ml) was given separately with 1.075×10-4, 2.125×10-4 and 3.15×10-4 g/ml of Centella asiatica L. extract. Similarly, 10 μM of ethinylestradiol was also given with the same three doses of C. asiatica extract. About, 0.5 ml of S9 mix (supplement with NADP) was also given with the treatments for 6 h. The cultures were washed with fresh RPMI-1640 and kept for another 48 h in an incubator at 37°C. After 47 h, 0.2 ml of colchicine (0.2 μg/ml) was added to the culture bottles. Cells were centrifuged at 800 g for 10 min. The supernatant was removed and 5 ml of prewarmed (37°C), KCl hypotonic solution (0.075 M) was added. Cells were resuspended and incubated at 37°C for 15 min. The supernatant was removed by centrifugation at 800 g for 10 min and 5 ml of chilled fixative (methanol: glacial acetic acid; 3:1) was added. The fixative was removed by centrifugation and the procedure was repeated twice. The slides were stained in 3%. Giemsa solution in phosphate buffer (pH 6.8) for 15 min. Three hundred metaphases were examined for the occurrence of different types of abnormally. Criteria to classify the different types of aberrations were in accordance with recommendation of EHC46 for environmental monitoring of human population [34].

For sister chromatid exchange analysis, bromodeoxyuridine (10 μg/ml) was added at the beginning of the culture. After 24 h, 5 μM of ethinylestradiol (dissolved in dimethylsulphoxide, 5 μl), the treatment was given separately with 1.075×10-4, 2.125×10-4 and 3.15×10-4 g/ml of C. asiatica extract respectively. Similar treatments with the three dosages of C. asiatica extract were given separately with 10 μM of ethinylestradiol. About, 0.5 ml of S9 mix (supplemented with NADP) was also given along with the treatments for 6 h. The cultures were washed with fresh RPMI 1640 and kept for another 48 h, in an incubator. Mitotic arrest was performed by adding 0.2 ml of colchicine (0.2 μg/ml). Hypotonic treatment and fixation were performed in the same way as described for the chromosomal aberration analysis. The sister chromatid exchange average was taken from an analysis of 50 metaphases during second cycle of division [35]. 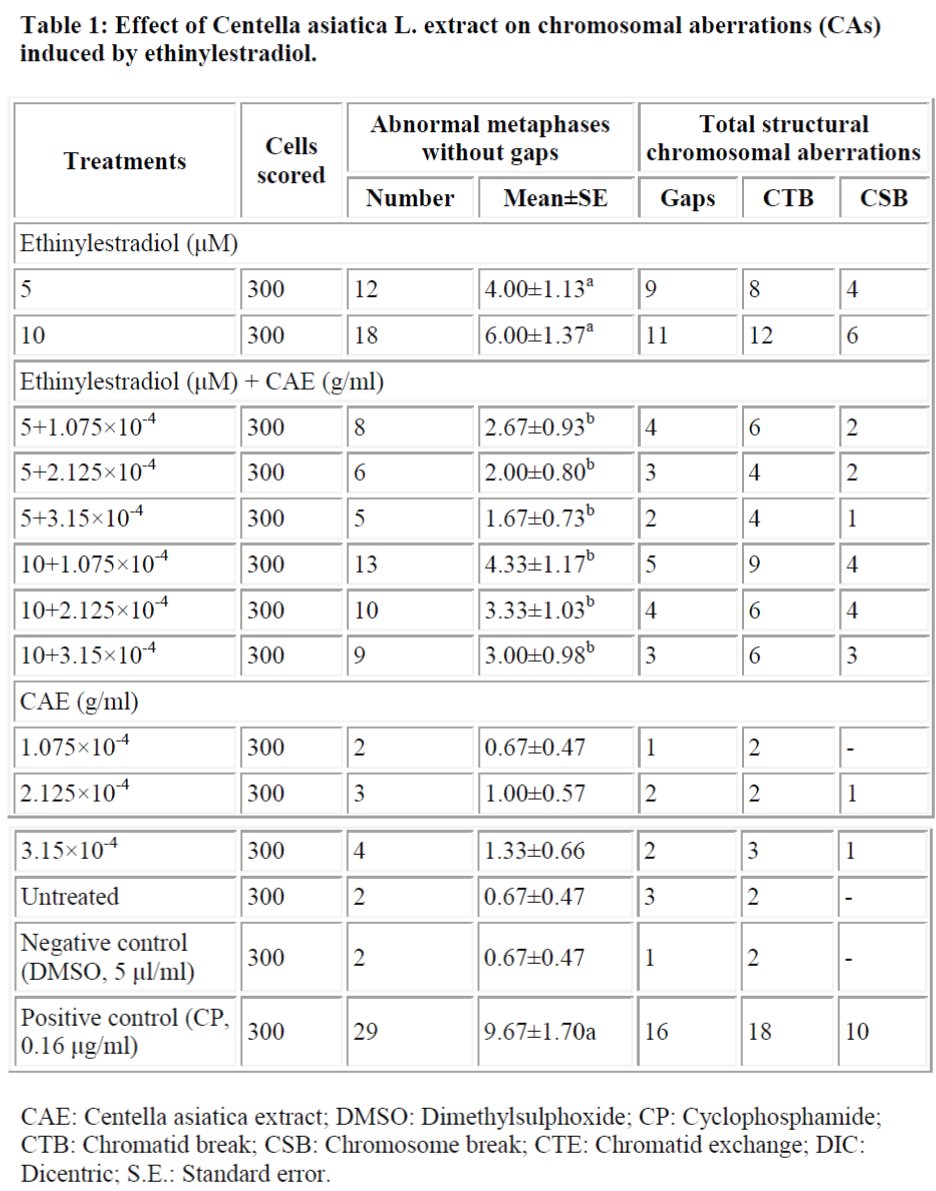 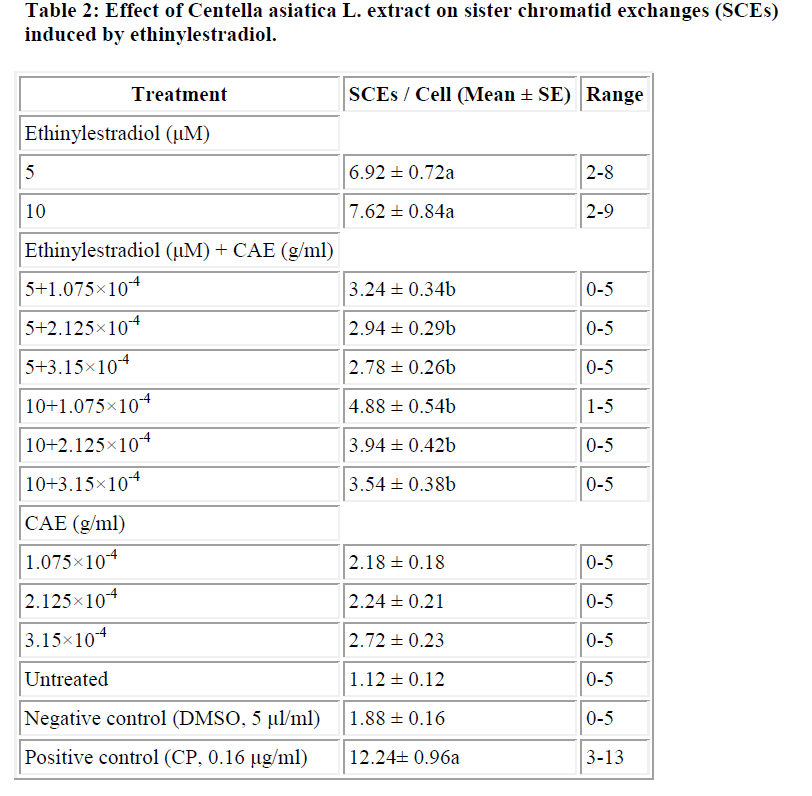 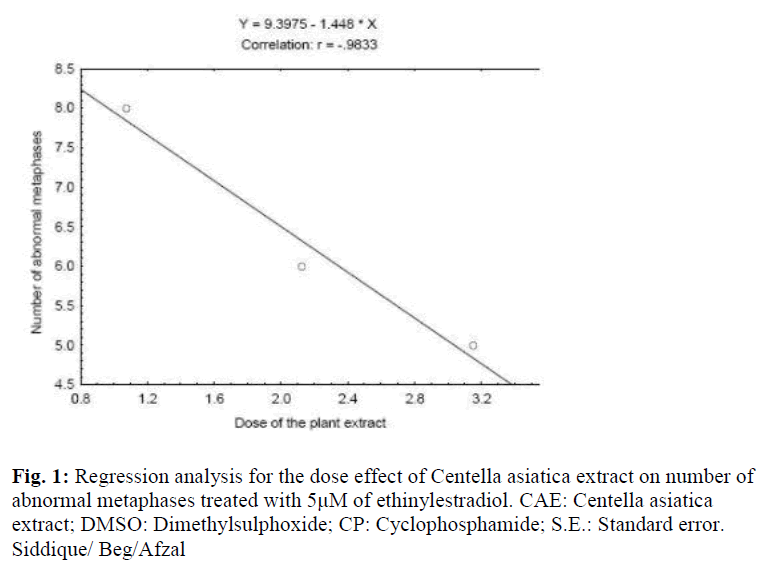 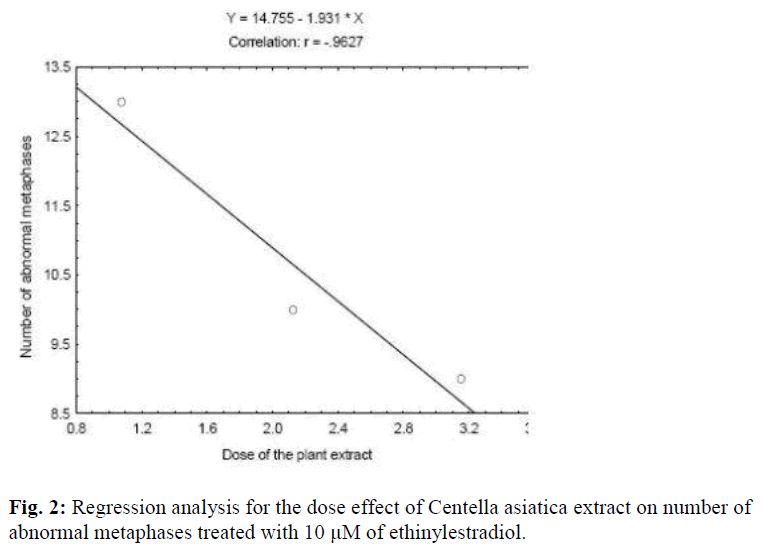 Figure 2: Regression analysis for the dose effect of Centella asiatica extract on number of abnormal metaphases treated with 10 μM of ethinylestradiol. 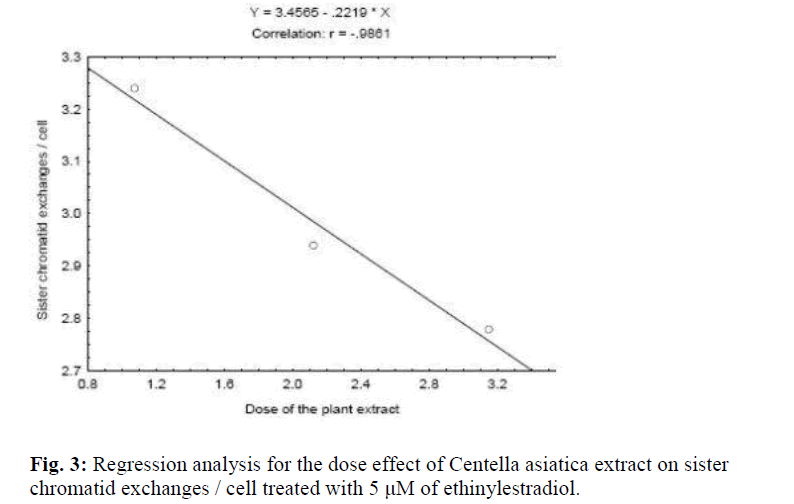 The results of the study reveal that the selected dosages of the plant extract were not genotoxic per se, but reduced the genotoxic damage of ethinylestradiol on human lymphocytes in vitro. In our earlier study, three doses of ethinylestradiol (1, 5 and 10 μM) were studied [32]. Ethinylestradiol was found to be genotoxic at 5 and 10 μM only in the presence of S9 mix supplemented with NADP. International Agency on Cancer (IARC), mainly on the basis of epidemiological studies classifies steroidal estrogens and estrogen progestins combinations among agents carcinogenic to humans (Group 1), progestins as possibly carcinogenic (Group 2) and androgenic anabolic steroids, as probably carcinogenic (Group 2A) [36]. Cancer is characterized by genetic instability, i.e. gross chromosomal abnormalities, which consist of translocation and gene amplifications. Molecular and cytogenetic evidence indicates that the induction of structural and numerical chromosome aberrations in cell play an important role in the neoplastic development of certain tumors [37]. An increase in the frequency of chromosomal aberrations in peripheral blood lymphocytes is associated with an increased overall risk of cancer [29,30]. Genetic toxicology tests are in vitro and in vivo assays designed to detect compounds that induce genetic damage directly or indirectly. Any kind of chromosomal damage may play an important role in many malignancies. The ready quantifiable nature of sister chromatid exchanges with high sensitivity for revealing toxicant-DNA interaction and the demonstrated ability of genotoxic chemicals to induce significant increase in sister chromatid exchanges in cultured cells has resulted this endpoint being used as indicator of DNA damage in blood lymphocytes of individual exposed to genotoxic carcinogens [31]. The above genotoxic endpoints are well known markers of genotoxicity and any reduction in the frequency of these genotoxic endpoints gives us an indication of the anti-genotoxicity of a particular compound [31].

At present much attention of preventive medicine research is focused on natural antioxidants, leading to isolation and identification of new biologically active molecules by the pharmaceutical industry. The crude extract of plants may contribute to total intake of plant antioxidants and be even better source of dietary antioxidants [38].

The compounds present in the extract may inhibit the promutagen bioactivation by blocking the oxidation processes or reacts with electrophilic metabolites of promutagens [39]. The verification of the possible mutagenic and/or anti-mutagenic effects of medicinal plants infusion/ extracts is another important factor in studies. Such effects have been elucidated in some plant species by using various test systems [40]. Medicinal herbs contain complex mixtures of thousand of compounds that can exert their antioxidant and free radical scavenging effect either separately or in synergistic ways [41]. Many plant products protect against xenobiotics either by inducing defoxifying enzymes or by inhibiting oxidative enzymes [42]. Detoxification systems play a major role in preventing carcinogenesis, but also an important role in preventing xenobiotic as well as indogenous toxicity. Phytochemicals plays an important role in inhibition of carcinogenesis [43]. Some plant extract may possess substances that can modulate the genotoxicity of other compounds. The data obtained in the present study suggests that the compounds present in the extract of C. asiatica are not mutagenic on their own or when associated with ethinylestradiol in the presence of NADP.

The protective effect observed in the present study i.e. significant reduction in the frequency of cells with chromosomal damage and sister chromatid exchanges may be due to the direct action of the compounds present in the extract on ethinylestradiol by inactivating it enzymatically or chemically. The genotoxic effects of ethinylestradiol have been attributed to the bio-activation of ethinylestradiol in the presence of S9 mix supplemented with NADP The compounds present in the extract may also enhance the DNA repair system or DNA synthesis or even may prevent the bioactivation of certain chemicals [44]. Our earlier reports on synthetic progestins showed that they are genotoxic in in vitro [45,46,47,48] and in vivo A reduction in the frequency of SCE and chromosomal aberrations in the test system thereby indicates the possibility of reducing the chances of carcinogenesis during the ethinylestradiol therapy in patients.

The extract of Centella asiatica L. is potent enough to reduce the genotoxic damage of ethinylestradiol. The results of the present study suggest that the plant extract can form the basis of herbal medicine as it has antioxidants that are responsible for the reduction of the genotoxic damage of the drugs. The prolonged use of ethinyl estradiol has been reported to induce cancer. Any reduction in the frequency of CAs and SCEs thereby gives an indication of little chances of developing cancer. The extract of Centella asiatica reduces the frequency CAs and SCEs induced by ethinyl estradiol.

Thanks are due to the DST, New Delhi for awarding the project under SERC-Fast Track Scheme No: SR/FT/LS-003/2007 to the author (YHS) and to the Chairman, Department of Zoology, Aligarh Muslim University, Aligarh, India, for laboratory facilities.