Chronic renal failure (CRF) is the syndrome of persistent renal impairment involving loss of glomeruli, tubular and nephron function [1]. CRF is associated with a complex pathology. Some manifestations such as accelerated aging, atherosclerosis, impaired red blood cell deformability, increased hemolysis and platelet dysfunction may be related to hyperproduction of free radicals [2].

Oxidative stress has been defined as a loss of balance between free radical or reactive oxygen species production and antioxidant systems, with negative effects on carbohydrates, lipids and proteins. Oxidative stress has been proposed to play a role in cardiovascular and infectious diseases, cancer, diabetes, neurodegenerative pathologies etc [3]. The fact that the incidence of these diseases increase in uremia and particularly in dialysis patients, suggests an increased exposure to oxidative stress in this condition [4].

Nitric oxide (NO‘ ) is a potent mediator displaying a broad spectrum of activities, including smooth muscle relaxation, impairment of myocyte proliferation, cytotoxic reactions, and neuronal transmission [5]. Several investigators have focused their attention on a possible role played by nitric oxide in the development of uremic symptoms, but the results were controversial and the matter is still debated [6,7].

With this background, the present study was aimed to evaluate the possible alterations of oxidant/antioxidant status in uremic patients undergoing hemodialysis and effects of Ubi Q100 supplementation.

This study included twenty chronic renal failure patients in the age group of 35 to 60 years undergoing hemodialysis. Control subjects were twenty healthy individuals matched for age and sex. The patients were diagnosed on the basis of detailed clinical history, clinical examination and other relevant biochemical investigations. All patients

had four hours dialysis sessions with polysulfone dialysis membrane. The patients suffering from other diseases, which may lead to oxidative stress, such as diabetes, inflammatory diseases, hepatic or respiratory diseases as well as smokers and alcoholics were excluded from study. Informed consent was obtained from each participant in the study. The study was cleared by institutional ethical committee.

Blood samples (7 mL each) were collected before and after hemodialysis from each patient. Two mL blood was collected in heparinized bulb and five mL was collected in plain bulb. Plasma and serum were separated from respective bulbs by centrifugation at 3000 rpm for 10 minutes at room temperature. All the samples were analyzed on the same day of collection. Serum creatinine was estimated by using Jaffe’s reaction in which creatinine react with picric acid to form creatinine picrate Serum malondialdehyde (MDA) levels were measured by reacting it with thiobarbituric acid at high temperature to form pink colored complex as in Kei Satoh method [12]. Nitric oxide was determined by Cortas and Wakid method [13], in which nitrate is reduced to nitrite by copper coated cadmium granules. This nitrite produced is determined by diazotization of sulfanilamide and coupling to naphthylethylenediamine to form purple complex. Serum vitamin E was measured by the reduction of ferric to ferrous ion which then forms a red colored complex with α- α’-bipyridyl as in Baker and Frank method Erythrocyte SOD activity was measured by Kajari Das method [15] which is based on the ability of SOD to inhibit nitrite formation. 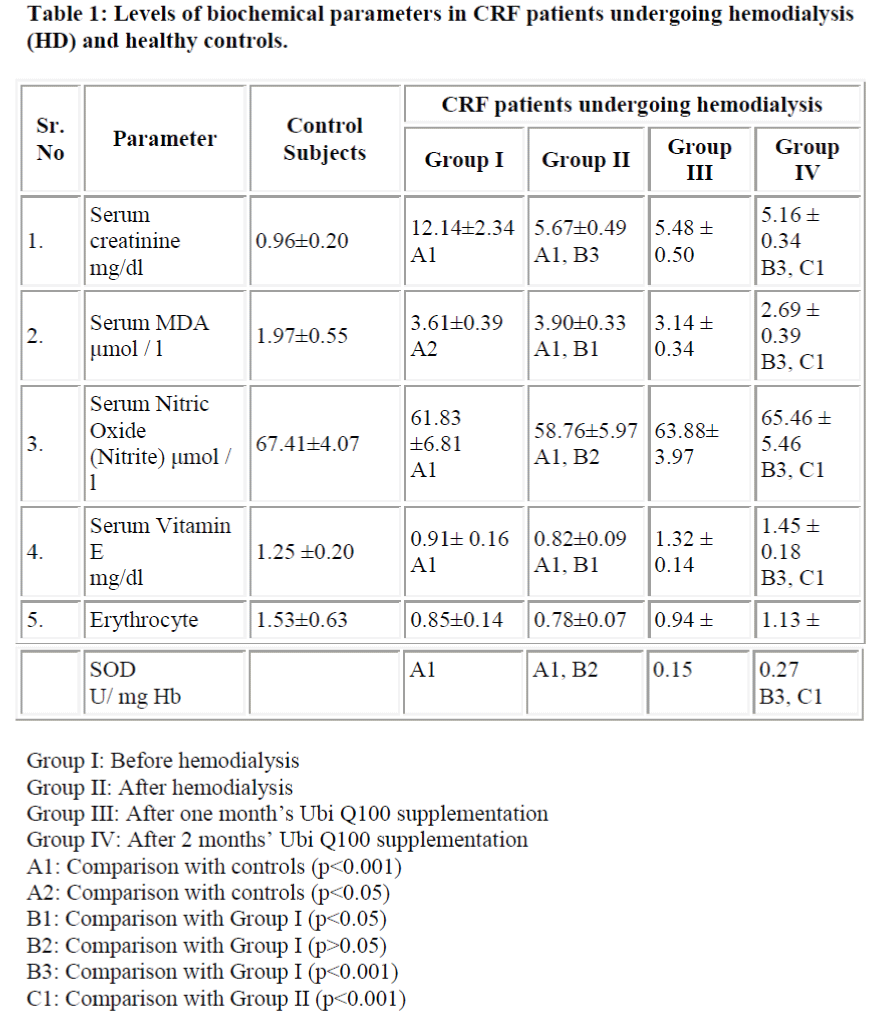 In the present study, we confirmed that oxidative stress is enhanced in hemodialysis patients as demonstrated by significant augmentation in pre and posthemodialytic serum MDA levels. Although haemodialysis leads to improvement in blood pressure and several biochemical parameters like creatinine and urea levels, it can also evoke several harmful atherogenic effects due to bioincompatibility of dialyzer components, accumulation of polyvinyl chloride, aluminium and acetate. Generation of reactive oxygen species could be an important harmful outcome of hemodialysis [17]. Oxidants induced by dialysis procedure mainly derive from oxidative burst of activated neutrophils and the subsequent superoxide anion (O2‘) generation [18].

Reactive oxygen species react with and inactivate nitric oxide and in the process produce highly reactive and cytotoxic products such as peroxynitrite and peroxynitrous acid. Peroxynitrite in turn reacts with and modifies various molecules such as lipids, DNA and protein. In addition to this, the oxidation of nitric oxide by reactive oxygen species inevitably results in functional nitric oxide deficiency [19]. In the present study we found significantly decreased serum nitric oxide levels in prehemodialytic samples, which further decreased slightly but not significantly after hemodialysis. It is known that oxidative stress may increase the synthesis of asymmetric dimethyl arginine (ADMA), which is an endogenous inhibitor of endothelial nitric oxide synthase [20].

Vitamin E is the most powerful important lipophilic anti-oxidant in humans. It contributes to membrane stability and protects critical cell structures against harm from oxygen free radicals and reactive lipoperoxides. In the present study, we found significantly decreased serum vitamin E levels both before and after hemodialysis. The diminished vitamin E level could partly be due to its overconsumption as an antioxidant subsequent to abnormal production of free radicals, while some reports also demonstrate low dietary intake of vitamin E [21].

There are conflicting results regarding the status of enzymatic antioxidant systems in patients with CRF. Several authors have reported reduced erythrocyte SOD activity in hemodialysis patients [1,16], whereas some studies described increased erythrocyte SOD activity in chronic uremic patients [22]. We further procure evidence supporting diminished antioxidant enzymes in hemodialysis patients. This could be due to a possible direct inactivation of the enzyme by its product hydrogen peroxide, or by superoxide anion itself [23,24], it could also be related to trace element deficiencies in hemodialysed patients [2].

The use of antioxidant therapy in hemodialysis opens a promising field in dialysis quality and prevention of oxidative stress related pathologies in renal patients. Coenzyme Q10 (CoQ10) is an essential co-factor in the mitochondrial electron transport chain and is found in all cell membranes. It is present in the body in both reduced and oxidized forms; the reduced form (CoQ10H2) is having antioxidant properties [8].

It has been observed that CoQ10 administration to experimental animals resulted in an increase not only in the CoQ content of mitochondria, but also in the mitochondrial level of α-tocopherol, which in turn was inversely correlated with a decrease in the rate of O2‘ generation. In homogeneous solutions [25] and membranes [26] CoQ has been shown to react with tocopheroxyl radicals to regenerate α-tocopherol, thus it has sparing effect on vitamin E. Significantly decreased serum MDA levels and increased antioxidant levels after Ubi Q100 supplementation in hemodialysis patients reported in present study suggests a protective effect of coenzyme Q and vitamin E against lipid peroxidation.

Our data led us to conclude that oxidative stress is enhanced in hemodialysis patients which may contribute to the development of dialysis-related complications such as cardiovascular disease, anemia etc. The study further reports beneficial effects of antioxidant supplementation-coenzyme Q, on oxidative stress in hemodialysis patients. Treatment with coenzyme Q improves renal function in these patients and may prolong the need for dialysis. Long-term follow-up in a large number of patients would be necessary to confirm these results.