Purpose: Chronic cerebral ischemia is a common pathological state, which can lead to cognitive disorder and neurological dysfunction. Aminoguanidine is a selective iNOS inhibitor which can improve acute cerebral ischemia, however its protective effect against chronic ischemic neurological damage remains to be researched. This study analyses the effect of aminoguanidine intervention on hippocampal pyramidal cell dendrite morphological change and spinophilin expression of rats with chronic cerebral ischemia, so as to explore its cerebral protection mechanism.

Results: SD rats were randomly divided into sham-operated group, model group (2VO group), and intervention group (aminoguanidine group). Compared with sham-operated group, the branches and length of hippocampal pyramidal cell dendrite of rats in model group at the 4th and 8th week were significantly reduced (P<0.05), and the spinophilin expression of model group was significantly reduced (P<0.05), showing a progressive behavioral and cognitive dysfunction; Compared with model group, the dendrite branches and length, and spinophilin expression of intervention group were significantly increased (P<0.05).

As an important component of cerebral limbic system, hippocampus is closely correlated with learning [6] and memory [7]. Owe to the specific composition of hippocampal blood vessel, hippocampus is an area which is the most sensitive to brain ischemia [8]. Dendrite is the transmission entrance of neurons information. Dendrite spine is the original site for excitatory synaptic transmission [9]. Hippocampal ischemia can cause deficits in synaptic plasticity [10]. Therefore, the morphology of hippocampal pyramidal cell dendrite and plasticity of dendrite spine are the cellular basis for learning and memory [11]. Spinophilin, locating on dendrite spine, is a multi-functional protein for regulating membrane and cytoskeleton, which plays a key role in central nervous system [12], and is closely related with morphological adjustment and number of dendrite spines, synapse formation, and neuronal migration [13].

The operation process for sham-operated group was roughly the same with model group, except for permanent ligation of bilateral common carotid arteries that was not conducted.

From the postoperative 2nd, 4th, 8th week, place each group of rats in Morris water maze for navigation training for consecutive 4 d, each day included 3 trainings, and each training lasted for 120 s with a unique entry point. If the rat finds platform within 120 s, keep it stay on platform for 15; while if fail to platform within 120 s, induce it to step on platform and stay for 15 s, and then the whole process of one training is considered finished. Keep training for 4 d by such procedure, record each rat's incubation period. The shorter the incubation period is, the nearer the distance is, indicating the better the learning and memory ability is [20].

Randomly take half amount of each group of rats, and quickly perfuse Golgi stain materials [22] at the 2nd, 4th, 8th, respectively (for model group, the successfully modeled rats were selected). Quickly perfuse 0.5% sodium nitrite liquid till discharge liquid is bloodless. Perfuse 10% formaldehyde solution for fixation, allowing it to fully replace former liquid, and then wait for 1-2 h. After that, slowly perfuse mordant dyeing (5% chloral hydrate, 5% potassium dichromate, 10% formaldehyde) till the discharging dark orange liquid, and the wait for 1-2 h. Open skull and take out hemicerebrum, take 8 mm long tissue block from anterior 1/3 site to backward, immerse it in mardant dyeing, place it in 37°C incubator which was placed in dark area for 24 h. Subsequently, immerse the tissue in 1% silver nitrate solution for silver plating, place it in 37°C incubator which was placed in dark area for 3 d (change new silvering liquid every day). Conduct serial section of hippocampus coronary using vibratome (slice thickness was 100 μm). Successively wash the slices with 2% potassium bichromate solution and distilled water, and then subject it to dehydration, transparency, sealing, and microscopic observation.

Collect images and analyse them using ImageJ software. Of all sections of one rat, select 5 sections with clear hippocampus and uniform thickness of dyed vertebral neurons. For each section, measure 4 cells of morphological integrity. For each group, observe 80 cells.

Take the other half amount of each group of rats, and quickly perfuse normal saline via rats' hearts till the discharging liquid becoming clearer. Perfuse 10% formaldehyde solution and fix it, open skull and take out hemicerebrum, take 8mm long tissue block (including hippocampus) from anterior 1/3 site to backward, then fix it in 4°C refrigerator for 24 h. After that conduct dehydration in gradient alcohol, paraffin embedding; prepare paraffin section of brain coronary in thickness of 4 μm. Use PBS to wash sections 3 times, each time immersing for 5 min. Drop 3% H2O2 at room temperature for 20 min, and the wash with PBS 3 times, each time immersing for 5 min. According to operations prescribed in SP kit instruction, develop color in primary antibody (rabbit-anti spinophilin, 1:500) and Dimethylbenzene Benzidine (DAB), control coloration time under microscope, conduct dehydration in gradient alcohol, perform xylene transparency, and seal section with Neutral balsam.

Select 5 sections for each rat, and select 5 views of hippocampal area for each section, and then observe under microscope. 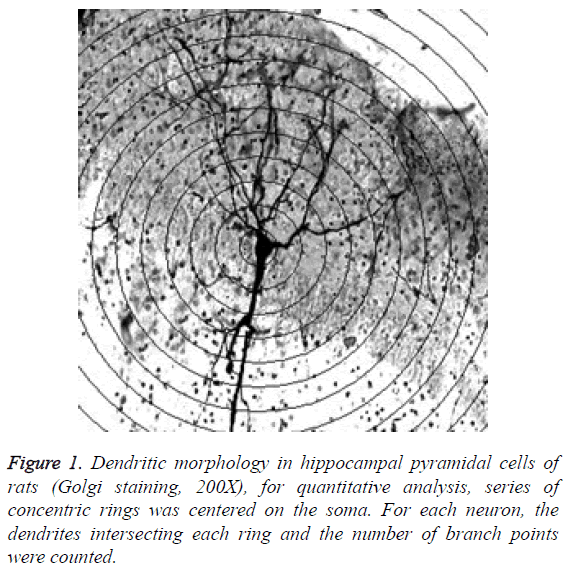 Figure 1: Dendritic morphology in hippocampal pyramidal cells of rats (Golgi staining, 200X), for quantitative analysis, series of concentric rings was centered on the soma. For each neuron, the dendrites intersecting each ring and the number of branch points were counted.

Measurement of spinophilin expression: Each view was scored according to coloration, non-coloration, color darkness (a), color proportion (b). The results are the mean value of aggregate score (a × b).

Behavior assessment results of all groups of rats

Results of dendrite branching and length 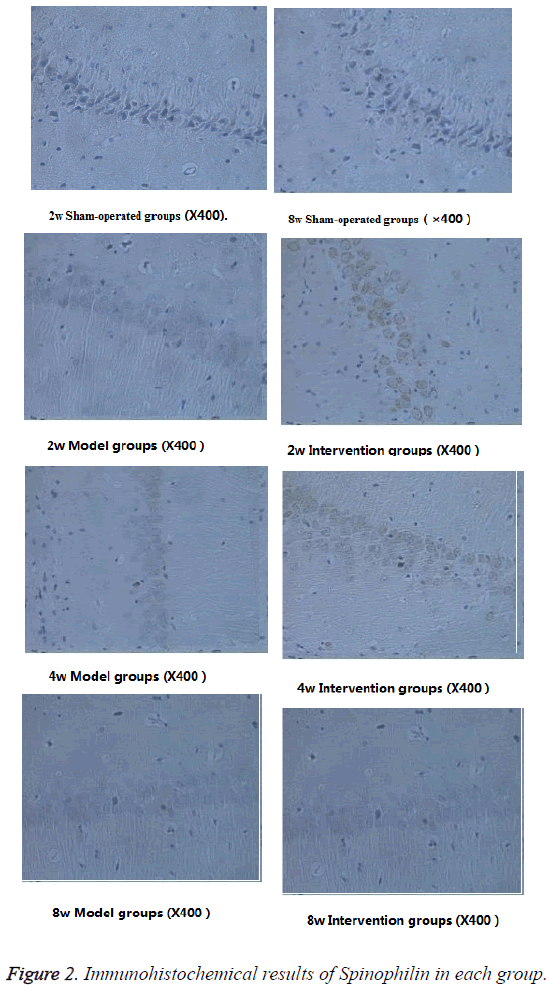 Figure 2: Immunohistochemical results of Spinophilin in each group.

Dendrite is a key area for neurons information reception, with function of receiving and integrating synaptic transmission. There are many spinous protuberance on the surface of dendrite, which is called dendritic spine where the synapse is formed. The branch of dendrite, dendrite length and dendritic spine can enlarge the neuron's surface area for receiving stimulation, which plays vital role in neurons information transmission [23]. Chronic cerebral ischemia is a common pathological state of nervous system, which can lead to energy metabolism dysfunction and cognitive impairment. Tsuehiya et al. [24] studied postoperative brain blood variation of rat 2VO and found that 1 week after operation, the hippocampal blood flow was reduced by 20%, brain cortex blood flow was reduced by 30%-45%, meanwhile the hippocampal glucose utilization rate was significantly decreased by 15%, and cortex glucose utilization rate was reduced by 20%-30%. From 8 weeks to 3 months after operation, the hippocampal blood flow was approximately reduced by 60%, and cerebrum low flow gradually became chronic state [25], accompanied by a series of pathologic changes such as neurotransmitter change, white matter damage, and neuron loss [4]. Bennett et al. [26] studied the nerve damaging mechanism of chronic cerebral ischemia, and found gradual apoptosis of nerve cells in hippocampal area of 2VO rats after operation, wherein the number of apoptosis was closely related with cognitive disorder. Due to the density distribution of blood capillaries, the hippocampal area is extremely sensitive to ischemia, and thus to be known as the most representative area for neuropathologic change. When performing task of spatial working memory, there is fixed time-phase synchronization phenomenon between local field potential and hippocampus electroencephalogram, which is closely correlated with process of spatial working memory [27]. Other studies showed that hippocampus-prefrontal circuitry neural projection was the key for learning and memorial function [28]. Therefore, it can be known that hippocampus is a sensitive area for brain ischemia and chronic cerebral ischemia can lead to pyknosis and apoptosis of hippocampal pyramidal cell and dendritic damage, and thus laying a pathophysiological basis for progressive cognitive disorder.

The low cerebral blood flow change after permanent ligation of bilateral common carotid arteries (2VO) is very similar to aging-induced chronic cerebral ischemia, which has been widely used to study the influence of chronic cerebral ischemia to cognitive disorder. Morris water maze was proposed by British psychologist Morris in early 1980s. Through allowing rats to search the target in an opaque pool, he observed and researches the learning, memory, spatial position, and cognitive ability of rate with damaged hippocampus, and achieved remarkable results. Therefore, Morris water maze has become an important experiment method for analyzing spatial learning and memory ability of animals [20]. Dendritic spine is a highly dynamic protuberance structure on subsynaptic membrane and distributed along neuronal dendrites, each spine develops into a synaptic structure. The plasticity regulation of synapse is directly related to the composition of memory [29]. Spinophilin, a nerve scaffold protein associated with plasticity regulation of dendritic spine [30], varies with the shape and density of dendritic spine during synaptic transmission. In early researches, Spinophilin has been regarded capable of maintaining the stability of actin cytoskeleton during morphological change of neuron dendrites [31]. Afia et al. [32] evaluated the number of Spinophilin immunocompetence miliary spines in hippocampus and cerebral cortex area 9 of elderly patients with different degrees of cognitive disorders, and found that the decrease of Spinophilin immunocompetence is closely related with neurofibrillary tangles the clinical cognitive disorder. Jia et al. [5] found that under chronic cerebral hypoperfusion, dendritic morphologic variation occurred in hippocampal CA1 region and prefrontal cortex, the number of dendritic spines was significantly decreased, and the rats showed significant cognitive disorder. In our research, with the worsening of cerebral ischemia of rats at the 2nd, 4th, 8th weeks, the dendrite length, dendritic branching, and Spinophilin expression were in decreasing trend, moreover, it can infer the stability and number of dendritic spines were decreasing, which affects synaptic neurotransmission function, thereby causing decreased learning and memory ability.

NO is a vasodilator. NOS (nitric oxide sgnthase) are a key factor for NO synthesis. The content of NO and biological action of NO are totally determined by the activity of NOS. As a inducible isoenzyme of NOS, iNOS is associated with physiological functions such as maintenance of nerve conduction and vasodilatation [33]. Under pathological condition, high expression of iNOS will produce large amounts of NO, so that leading to the subsequent lipid peroxidation process may cause DNA breakage, neuronal apoptosis, and opening of brain blood barrier [34]. Under electron microscope, it can observe AG can reduce cerebral microvessel structural damage, inhibit microvascular remodeling, and improve the number of cerebral microvessels [35]. Torre et al. fount that the NO content in hippocampus of rat after 2VO operation was increasing for 2 w [25], leading to a significant nerve cell damage of rats with chronic cerebral ischemia. As a selective inhibitor of iNOS, AG can inhibit NOS activity, reduce the number of iNOS, decrease production of NO, and thus reduce excessive NO-mediated excitatory amino acid toxicity, reduce the production of oxygen radicals, mitochondria damage, and calcium overload induced hypoxicischemic damage [15,36]. In this experiment, the intervention of AG was given to rats with chronic cerebral ischemia, and results showed that the length and branching degree of hippocampal pyramidal dendrite of intervention group were significantly higher than that of model group, the Spinophilin expression of intervention group was significantly increasing from the 2nd week to the 8th, and the latency periods of intervention group at the 4th, and 8th week were significantly shorted as compared with that of model group, i.e. the learning and memory ability was significantly improved. It can infer that AG can inhibit the number of active intracerebral iNOS, reduce the of toxic effect of high content of NO on hippocampal pyramidal cells, improve antioxidant function of mitochondria, reduce apoptosis rate of brain cells, improve hippocampal microvascular remodeling after chronic cerebral ischemia, stabilize the morphology of dendrite and dendritic spine, improve chronic cerebral ischemia anoxic condition, and the damage process of hippocampus pyramidal dendrites and dendritic spines, and maintain the normal transmission of synapse.

AG can cause morphologic change of hippocampal pyramidal cell dendrites and enhance Spinophilin expression of rats with chronic cerebral ischemia, so as to exert cerebral protection effect. Therefore, AP is of great clinical value to be applied in treating cognitive disorder caused by chronic cerebral ischemia. However, it needs further study on whether AG can directly adjust morphology of dendritic spine as well as its action targets, in order to explore its maximum clinical treatment value.