Effect of addition of intrathecal midazolam to 0.5 % Bupivacaine on duration of analgesia

One of the primary aims of anaesthesia is to alleviate the patient’s pain and agony, there by permitting the performance of surgical procedures without any discomfort. Relief of postoperative pain has gained real importance in recent years considering the central, peripheral and immunological stress response to tissue injury. Any expertise acquired in this field should be extended into the postoperative period, which is the period of severe, intolerable pain requiring attention. So there is need of extended analgesia without any side effects to achieve this goal.

1) ASA grade I to II, posted for operations below umbilicus, elective as well as emergency.

4) Patients who were ready to be included in the study, and who are ready to sign written consent.

3) Patient who were not ready to be included.

Protocol was sent to local Ethical committee and approval was obtained. Each patient evaluated pre-anaesthetically and detail history about previous illness and drug treat ment was elicited. Thorough physical examination was carried out. Routine investigations were done. If patients fulfill inclusion criteria, they were explained about procedure and written consent was obtained from the patients. Patients were randomly divided into group I (control) and II (study).

Sequential design was used for the study. All the patients were subjected to spinal analgesia with all aseptic precautions with a 23 or 24 gauge lumbar puncture needle in L3 – L4 interspace. After obtaining free and clear flow of cerebrospinal fluid, intrathecal administration of drugs was done as follows:

After completion of surgery, patient was shifted to the recovery room. A person who was unknown to either of the groups observed patients, till the effect of spinal analgesia wore out. All the relevant information was recorded on a pretested, predefined, semiopen proforma. Any analgesic or sedative were withheld in the postoperative period, unless the patient complained of pain (Grade II). PR, BP and RR were recorded every one hourly till 6 hours and every 4 hourly till 24 hours. Side effects like nausea, vomiting, itching, degree of sedation and respiratory depression were noted in the postoperative period.

Evaluation of pain and pain relief was done according to McGill pain questionnaire (0 – no pain to 5 – excruciating pain). When patients complained of discomforting pain (McGill grade II) parenteral analgesic was prescribed and the total number of doses in the 24 hour period were noted.

Statistical analysis of the data was done using computers. Statistical tests such as chi-square, Z test were used wherever applicable. P<0.05 was considered to be significant.

Table 1: Effect on sensory and motor block in both groups.

There was no statistically significant difference in the time required for onset of adequate analgesia i.e. time taken to attain T10 level in the two groups.

There was no statistically significant difference in the time required for onset of complete motor block and also in the total duration of the motor block. (P > 0.05) 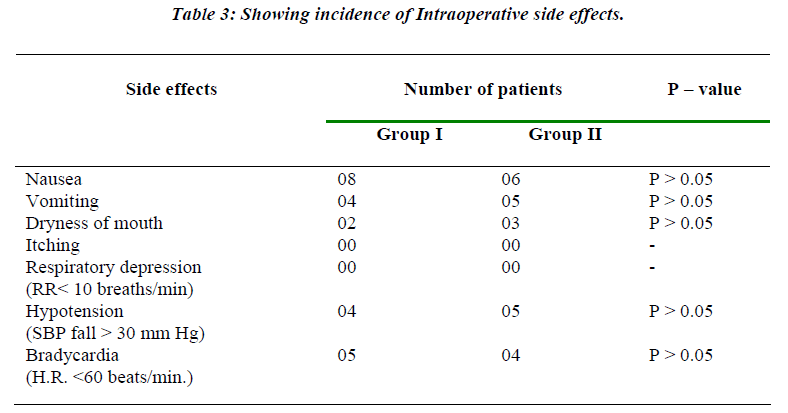 This study has shown that the mean duration of analgesia is extended if midazolam is added to the bupivacaine, without increasing the side effects.

Demonstration of benzodiazepine stereospecific binding sites in the spinal cord and brain, it seems likely that there exists a neurotransmission system involving benzodiazepine like peptides interacting with receptors in spinal cord [4,5]. This evidence points to possible spinal mechanism, which may be site of action of Midazolam in producing analgesia and interruption of somatosympathetic reflexes [7].

The present study shows that addition of 0.5 ml midazolam to 3 ml of 0.5% bupivacaine does not alter the onset of adequate analgesia and maximum upper level of sensory block, time to reach maximum level of block (dermatome) and duration of motor block.

Similar findings were also reported earlier [9.10]. Intrathecal midazolam produces post operative analgesia without prolonging motor block. [6,11] Whereas Tucker A. P. et al reported that the use of midazolam is as safe as bupivacaine [12]

So this study has shown that addition of 0.5 ml midazolam (2.5 mg, preservative free) to bupivacaine significantly increases the period of analgesia without increase in the side effects.