Introduction: Hemoglobin Vesicles (HbVs) have been developed as artificial oxygen carriers in the form of liposomes containing concentrated hemoglobin extracted from outdated human Red Blood Cells (RBC). Because HbVs have a small particle size of 250 nm in diamete, rthey can efficiently perfuse capillaries.

Objectives: To evaluate the reperfusion of capillaries with HbVs in a tracheal transplant model and compare it with that of RBC.

Methods: Isogenic mice were used as both donors and recipients in a parallel trachea transplant model, which realizes simultaneous histological observation of the recipient and the grafted tracheas. Both ends of the donor trachea were anastomosed end-laterally to the recipient trachea to form in parallel. After transplantation, 0.3 ml of HbV solution (Hb concentration, 10 g/dl) was administered via the tail vein. The recipients were sacrificed 1, 4, 6, and 8 h after surgery. The tracheas were harvested, and the reperfusion of tracheal Subepithelial Capillaries (SEC) was histologically evaluated.

Discussion: Our experiment with a tracheal transplantation model suggests that HbVs, which are smaller than RBC, can reperfuse the capillaries of grafts earlier than RBC after transplantation and contribute to the oxygenation of transplanted tissues.

Suture failure of anastomosis and dysfunction of grafted organs are major complications in transplantation. Blood flow disorders are more likely to occur, and ischemia at the anastomotic site can cause dehiscence and other serious problems. Especially in lung transplantation, because bronchial arteries are not anastomosed, the blood flow of capillaries in the bronchi is supplied from the collateral circulation from the pulmonary arteries and veins [1,2]. Attention should always be paid to the blood flow and oxygen supply at the anastomotic site of the bronchi.

Hemoglobin Vesicles (HbVs) have been developed as blood transfusion substitutes, which are liposomes containing human hemoglobin extracted from expired Red Blood Cells (RBC) [3]. The 250 nm particles have a lipid bilayer membrane with a surface modified with polyethylene glycol to prolong the blood retention time (Figure 1). Various animal studies have demonstrated the efficacy and safety of HbVs in resuscitation for hemorrhagic shock and their ability to deliver oxygen [4-6]. They are expected to be used as alternatives to RBC transfusion in emergency medicine, large-scale disasters, and remote areas [7,8]. Clinical trials were initiated with the support of the Japan Agency of Medical Research and Development model. 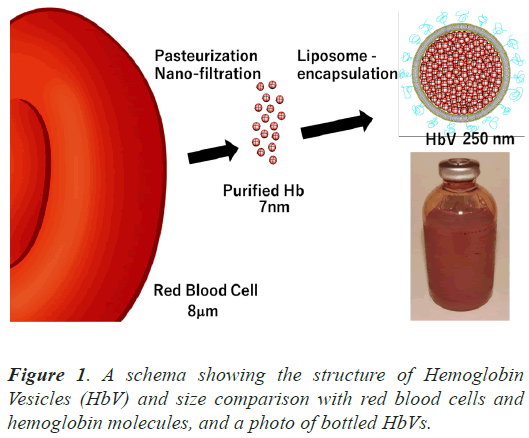 Figure 1: A schema showing the structure of Hemoglobin Vesicles (HbV) and size comparison with red blood cells and hemoglobin molecules, and a photo of bottled HbVs.

(AMED) in 2021. Because HbVs are non-infectious, do not require cross-matching, and can be stored at room temperature for more than 2 years, they are ideal for quick use in the operating room [9]. They can be administered without delay for abrupt massive intraoperative bleeding. In the acute and long-term phases of an animal model of lung resection, circulation was stabilized with HbV administration, and there were no significant adverse longterm effects on postoperative recovery in our previous investigation [10,11].

HbVs have various clinically useful features, including their small particle size of 250 nm, much smaller than RBC (Figure 1) [3]. We hypothesized that HbVs would reperfuse capillaries in a grafted trachea earlier than RBC could in a mouse tracheal transplant model in which blood vessels nourishing the trachea are not anastomosed. We aimed to evaluate the reperfusion of capillaries with HbVs in a tracheal transplant model and compare it with that of RBCs. In this model, the capillaries of the transplanted trachea were elongated at the anastomotic site, forming an anastomosis with the recipient’s capillaries and resuming blood flow.

Specific pathogen-free, inbred, 6-week-old male C57BL/6 mice weighing approximately 20 g were purchased from CLEA Japan (Tokyo, Japan). They were kept on a 12 h light/dark cycle with free access to food and water. They were brought to the hospital a week before surgery, and isogeneic tracheal transplants were performed using C57BL/6J mice as recipients and donors.

The double-lumen orthotopic tracheal transplant mouse model was established according to the procedures previously reported by Ohtsuka et al. [12]. A donor mouse was deeply anesthetized by intraperitoneal injection of ketamine and xylazine, followed by inhalation of sevoflurane in the supine position, thoracotomized, and harvested from the cricoid cartilage to the bifurcation of the carina. After flushing the RBCs, the trachea was wrapped in gauze that was moistened with normal saline and placed at a cold temperature (4°C). Subsequently, the recipient mice were anesthetized in the same manner. The neck was opened, and two orifices were provided for anastomosis on the recipient trachea at 8 mm intervals to prepare anastomosis. The trachea of the donor and recipient were anastomosed by the method of the end-to-side anastomosis with approximately 3-4 interrupted sutures using 10-0 nylon to ensure airway continuity (Figures 2A and 2B). All surgeries were performed aseptically using a surgical microscope at 5-20 × magnification (surgical scope M680; Leica Microsystems Inc., Bannockburn, IL, USA). The cold and warm ischemic times were approximately 10 min and 15 min, respectively.

Figure 2: (A) A photo of the surgical field, (B) a schema and (C) a macroscopic cross-section photo of a parallel tracheal transplantation model on mice. A donor’s trachea was anastomosed end-laterally to a recipient’s trachea in two places, the oral side and the lung side.

Preparation and systemic administration of HbVs

HbVs have been developed as artificial oxygen carriers in the form of liposomes containing concentrated hemoglobin, extracted from outdated human RBC prepared for transfusion, purified, virus-inactivated, and encapsulated in liposomes (Figure 1) [3]. They were prepared under sterile conditions at Nara Medical University, as described previously, and suspended in saline at a hemoglobin concentration of 10 g/dL. The physicochemical parameters of HbVs were as follows: particle diameter, 251 ± 80 nm; methemoglobin concentration, <2%; and oxygen affinity (P50), 28 Torr. They can be preserved for years, used regardless of blood type, and do not incur a risk of infection.

After closing the cervical wound and completing the transplant surgery, 0.3 ml of HbVs (30 mg Hb/body) were intravenously administered from the tail vein with a 29-gauge needle at 0.1 ml/min. The mice were awakened from anesthesia.

Recipient mice were euthanized under deep anesthesia at 1, 4, 6, and 8 h after transplantation. The graft and recipient tracheas were harvested in a lump, and the tissue was fixed with a 5% formalin solution. Paraffin-embedded tissues were sectioned at 5 mm thickness in a plane perpendicular to the long axis of the trachea. Sections taken from the middle of the tracheal graft and adjacent recipient’s tracheas with preserved luminal structures were stained with Hematoxylin and Eosin (HE) and CD31 for vascular endothelium to identify tracheal SECs (Figure 2C).

Tracheal grafts and recipient tracheas were immediately fixed in 2.5% glutaraldehyde in phosphate buffer (0.05 mol/L, pH 7.4) for 2 h and post-fixed in 1% osmium tetroxide in the same buffer for 1 h at 4°C. The specimens were dehydrated in a graded series of ethanol, dehydrated in acetone, and embedded in a Quetol 812 epoxy resin mixture (Nisshin EM, Tokyo, Japan). Ultrathin sections were prepared and stained with uranyl acetate and lead citrate. Sections were examined using a JEM 1400 electron microscope (JEOL, Tokyo, Japan) operating at 80 kV.

The time course of the number of HbVs per unit crosssection of SEC was compared between the recipient’s tracheas and the grafted tracheas using electron microscope images. Vessels with preserved luminal structures were randomly selected for measurements. The subepithelial region was tracked using computer-assisted image analysis system image j, and the vessel area and the number of HbV particles were measured. The areas of RBC and white blood cells were subtracted from the vessel area.

Identification of tracheal SEC and their perfusion with RBC

A large number of fine particles with a diameter of approximately 250 μm were observed in the SECs of the recipient trachea (Figure 5A). Since the particles were spherical or disc-shaped with a smooth surface and had the same morphology as HbVs observed under electron microscopy in our previous studies [13], it was confirmed that HbVs perfused the SECs of the recipient’s trachea at every time point, 1 to 8 h after the surgery and HbV administration. 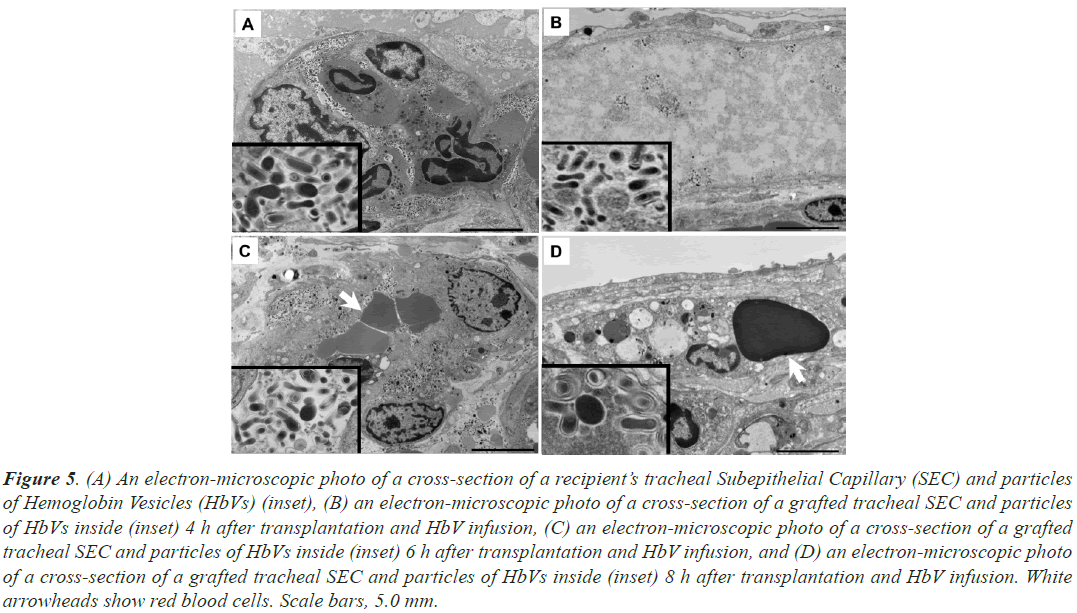 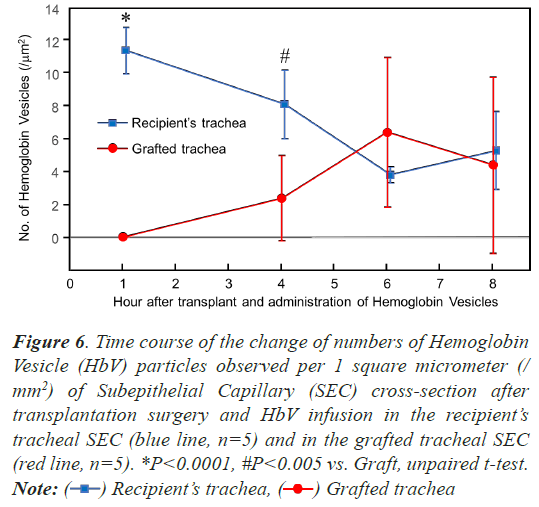 This is the first study to observe capillaries in transplanted tissue reperfused with HbVs (an artificial oxygen carrier) using an electron microscope. It was a surprising result that a considerable number of 250 nm HbV particles could be found in the SECs of the grafted trachea as early as 4 h after transplantation, at a time when RBC reperfusion had not started.

It is important to avoid anastomotic insufficiency or suture failure during surgery, including organ transplantation. Because most suture failures are caused by poor blood circulation and ischemia between tissues, surgeons should always pay attention to blood flow and oxygen supply at the anastomotic site. It is thought that blood vessels must be connected and share blood flow between tissues as soon as possible. In this experiment of a tracheal transplant model without vascular anastomosis, it was revealed that the anastomosis of capillaries through which HbV particles with a diameter of 250 μm could pass started within 4 h after transplantation, while the passage of RBC was confirmed after 6 h. Various animal models have confirmed that HbV has oxygen-carrying ability in the living body; therefore, if HbV supplies oxygen to ischemic tissue faster than RBCs, it may help prevent suture failure and dysfunction of transplanted organs.

The number of HbVs in SECs changed over time, and different trends were observed between the recipient and transplanted tracheas. The maximum number of HbVs was first observed and then decreased in the recipient trachea. This is because the HbV retention time in blood was designed to be shorter than that of RBC [13]. They are trapped in the liver and spleen over time, decompose, and metabolize as well as RBC. Meanwhile, in the graft trachea, the number of HbVs was small after 4 h, but it increased as the reanastomosis of the capillaries probably progressed after 6 h and subsequently decreased by being trapped in the liver and spleen.

It has been reported that the ischemic state of the tissue triggers the induction of angiogenesis and the establishment of a new vascular network. Sprouting, stretching, and branching from injured vessels promote vascular anastomosis and lead to reperfusion. It is also known that vascular endothelial growth factor is a potent factor that promotes endothelial cell proliferation and migration and is likely to be associated [14]. Plock et al. previously reported that HbV administration improved tissue survival and wound healing in critically ischemic skin flaps [15,16]. They suggested that hemodilution with HbV stimulates neovascularization through endothelial Nitric Oxide Synthase (eNOS). These effects of HbV on wound healing may be expected in organs other than the skin. In our tracheal transplant model, capillary elongation and reanastomosis probably occurred within 4 h by a similar mechanism. The location of the reanastomosis of capillaries is considered to be the end-to-side anastomosis between the recipients’ and the grafted trachea, but it is also possible that the reanastomosis occurred between the graft trachea and surrounding tissues, such as fat tissue.

A limitation of this study is that it did not evaluate whether oxygen delivery by HbVs contributes to transplanted tracheal engraftment and anastomotic wound healing. The amount of HbVs required to contribute to wound healing or engraftment of transplanted organs has not yet been investigated. In future studies, we will consider experiments to examine the functional effectiveness of early perfusion with HbVs for organ transplantation. Additionally, the effects of HbVs on additional functions should be verified. High oxygen affinity HbV is achieved by changing the allosteric effectors to reduce P50 to 9 Torr, which can carry more oxygen and contribute to tissue oxygenation [11]. Carbon monoxide-bound HbVs (CO-HbV) have antioxidant and anti-inflammatory model.

functions [17]. They may also be effective in oxygenating transplanted tissues in microcirculatory failure and may provide additional benefits.

In conclusion, it was revealed that reperfusion in the capillaries of the transplanted tissue started as soon as 4 h after transplantation and that HbVs passed through the reanastomosis site before RBC. As HbV has a similar oxygen-carrying capacity to RBC, it may reduce ischemic damage and contribute to the healing of transplanted tissues.

The authors thank the Support Center for Medical Research and Education, Tokai University School of Medicine, for their assistance with animal experiments.