The ocular manifestation of Eales Disease results from overlapping stages of vasculitis, occlusion, and neovascularization. This mimics several disease entities ranging from infectious to inflammatory causes. We report a case of a young healthy Filipino male with few months painless monocular sudden blurring of vision. On eye exam, there was vitreous hemorrhage with ultrasound evidence of retinal detachment on the bad eye. The good eye, on the other hand, has perivascular sheathing of peripheral vessels, which, on fluorescein angiography showed dye staining, extravasation, vessel obliteration, capillary dropouts, and collateral formation. Laboratory studies were normal except for positive PPD skin test. Infectious and inflammatory entities were considered less likely and Eales disease as a more probable diagnosis. The patient underwent pars plana vitrectomy on the bad eye where intraoperatively revealed fibrovascular fronds and an attached retina. Pan-retinal photocoagulation was also done on both eyes. Visual acuity after 3 months was 6/6 for both eyes. Management of Eales disease is similar to other vasoocclusive diseases where prevention of further ischemia and neovascularization is the main goal of treatment.

A 26-year-old Filipino seaman presented to RMC Eye Clinic with the blurring of vision in the left eye. The patient initially experienced gradual left eye blurring of vision for a year which later on had an abrupt decline in vision two months prior to consult. The blurring of vision was also associated with floaters. First, consult was done at a private eye clinic where the primary consideration was Vogt Koyanagi Harada (VKH). He underwent intravitreal Anti-VEGF (bevacizumab) injection that afforded transient and partial improvement. The patient went to another private eye center for the second opinion. Eye ultrasound (B-scan) was done showing retinal detachment. He was advised to undergo scleral buckling and pars plana vitrectomy. However, the patient decided to seek another opinion hence consult at the RMC eye clinic (Figure 1). 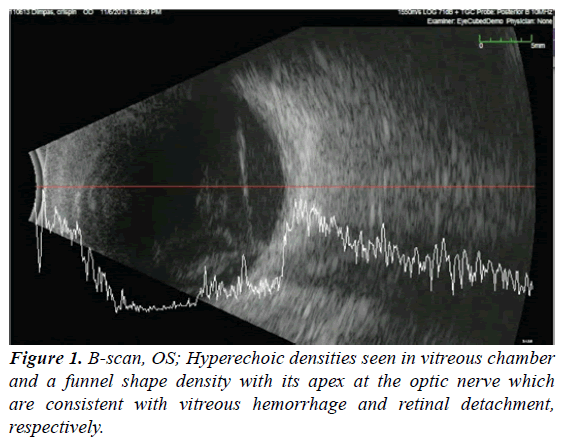 Figure 1: B-scan, OS; Hyperechoic densities seen in vitreous chamber and a funnel shape density with its apex at the optic nerve which are consistent with vitreous hemorrhage and retinal detachment, respectively.

On initial ophthalmologic exam, visual acuity was 6/6 on the right eye, and hand movement with a good light projection on the left eye. Extraocular motility was full and equal. Goldmann applanation tonometry was 12, OD and 13 mmHg, OS. Pupils were round, reactive with no afferent pupillary defect. The anterior segment was unremarkable with clear corneas, full chamber, no cells and flares Lens were NO1NC1 for both eyes. On indirect ophthalmoscopy (Figure 2), the right eye has clear media; yellow-orange disc with cupping of 0.3; normal course and caliber of temporal arcade vessel with an artery-venous ratio of 2:3; however there was a note of perivascular sheathing of the superior and inferior nasal arcade. On the other hand, the left eye had vitreous hemorrhage with no view of the retina. Vital signs and systemic physical exam were unremarkable. 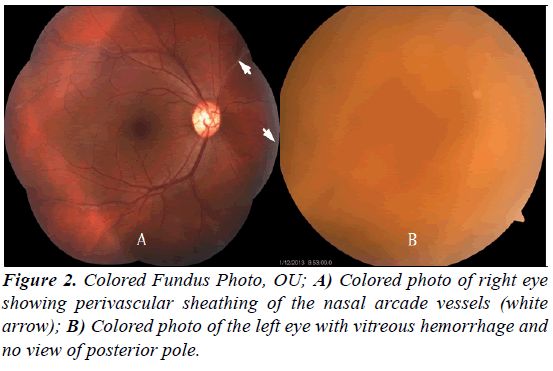 The fundus finding of retinal perivascular sheathing at this point lead to the differentials of several infectious and inflammatory processes such as Tuberculosis, Syphilis, CMV (HIV related), Behcets, SLE, Wegeners Granulomatosis, Polyarteritis Nodosa, and Eales Disease. Although there was ultrasound evidence of left eye retinal detachment, VKH, which commonly presents with bilateral exudative retinal detachment, was considered less likely due to the absence of other signs and symptoms that support its diagnosis such as granulomatous uveitis, choroiditis and integumentary, neurologic and auditory involvement.

To narrow down the differentials, initial laboratory exams (Table 1) were done which revealed unremarkable except for microscopic hematuria and positive tuberculin skin test (PPD). The patient was referred to Internal Medicine and was treated with ofloxacin 400 mg tablet twice daily for 7 days with resolution of microscopic hematuria. Further evaluation at the referred service revealed that the patient engages in unprotected opposite sexual encounters. Additional laboratory exam (HIV screening test) were then requested which returned negative. Colored fundus photo, fluorescein angiogram, and repeat B-scan were also done.

The normal laboratory studies, except for positive PPD, coupled with an unremarkable systemic evaluation makes infectious and inflammatory etiologies less likely. The differentials are narrowed down (Table 2) into primary ocular diseases, which are Eales disease and pars planitis. Both affects young individuals and can present with peripheral vasculitis, neovascularization, vitreous hemorrhage, and retinal detachment. Moreover, on fluorescein angiogram, both entities can present with peripheral leakage and late phase staining. All of which were observed in the case. Pars planitis is an idiopathic bilateral intermediate uveitis where inflammatory cells can be appreciated in the anterior chamber and in the vitreous (snowballs and snowbank). These were not seen in the patient. On the other hand, Eales disease has some association with tuberculin hypersensitivity, which the patient has. Hence, the diagnosis of Eales disease becomes more probable (Figure 3). 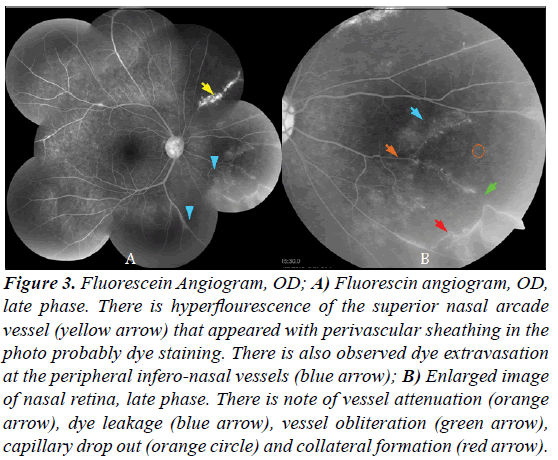 Eales disease is an occlusive vasculopathy where retinal ischemia is inevitable. Ischemia stimulates neovascularization that has potentially blinding sequelae: hemorrhage, retinal detachment, and neovascular glaucoma. The plan was to treat the case like a vaso-occlusive disease such as branch vein occlusion, central vein occlusion, and diabetic retinopathy. Panretinal Photocoagulation (PRP) was done to the right eye. The left eye had an ultrasound evidence of retinal detachment, thus, surgical management was deemed appropriate. The patient underwent pars plana vitrectomy on the left eye. Intraoperatively though, the retina was found to be attached, and there was a note of fibrovascular fronds on the disc and inferior nasal arcade vessel with focal traction retinal detachment. The same eye underwent PRP afterward. Postoperatively after 3 months, both eyes had a visual acuity of 6/6.

The ocular manifestation of Eales Disease results from the overlapping stages (Figure 4) of venous inflammation (vasculitis), occlusion, and retinal neovascularization [1]. Early in the disease, intraocular inflammation is a common manifestation represented by peripheral venous dilation and vascular sheathing. The vessels involved become obliterated and an avascular area develops. Later in the course, intraretinal hemorrhages may appear followed by an increase in vascular tortuosity with the frequent collateral formation. Retinal ischemia stimulates neovascular growth from the surrounding normal vasculature. The common site is just proximal to the site of obstruction. The new vessels are the most important cause of repeated vitreous hemorrhage [2]. In a study done by Abraham, et al. [3], fundus exam of 144 eyes showed 84% of periphlebitis and sheathing of vessels; kinky tortuous venules and irregular caliber of vessels in 37%; pigmentation in the course of or at bifurcation of vessels and circumscribed areas suggestive of healed chorioretinitis in 35%; surface NVE or neovascular vitreous fronds in 50%; and vitreous hemorrhage in 34% of the eyes. 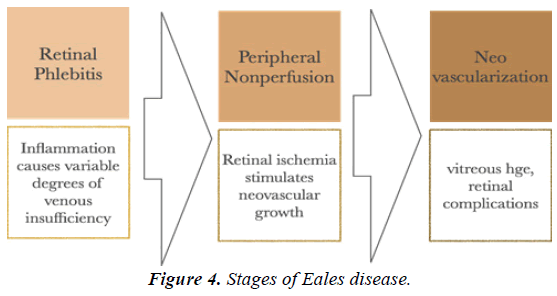 Our patient presented with perivascular sheathing in the good eye and vitreous hemorrhage in the bad eye. Fluorescein angiogram showed more fundus details in the good eye: vasculitis characterized by vessel wall staining and extravasation; vessel obliteration with the collateral formation. Post vitrectomy findings of the bad eye revealed fibrovascular fronds, which could have been the source of the vitreous hemorrhage.

Eales disease predominantly affects healthy young adults, with male predominance. The peak age of symptom onset is 20-30 years old [4]. Many patients present with symptoms in only one eye, but detailed fundus exam of the fellow eye reveals the early changes associated with Eales Disease such as periphlebitis, vascular sheathing or peripheral nonperfusion. Eventually, between 70%-80% of patients develop bilateral involvement though retinal involvement may not be of the same extent [2]. Our patient is a 26-year-old healthy male who consulted for floaters with the sudden blurring of vision of the left eye. Dilated fundus exam and fluorescein angiography revealed evidence of the Eales disease on the fellow eye.

The etiology is believed to be multifactorial, although it remains unclear. Recent immunological and histopathological studies have implicated Mycobacterium tuberculosis, retinal immunity, human leukocyte antigen, and free radical-mediated damage in the pathogenesis of this disease [4]. Mycobacterium tuberculosis is the most relevant among the proposed etiologies in our case since the patient has a positive PPD skin test. In a study by Sing, et al. [5], more than 50% (16 out of 28) of vitreous fluid from patients with Eales disease was positive for MTB genomes. Although there is a higher than normal incidence of positive reaction to tuberculin protein, no one demonstrated any evidence that the ocular changes are related to infection of the eye or retina by tuberculin bacteria [4]. The most widely held belief is that Eales disease is an immune-mediated hypersensitivity process resulting from prior exposure to the tuberculoprotein [6]. In another study conducted, HLA phenotypes DR3, A1, B8, B5(51), and DR15(2) occurred in the majority of cases of Eales’ disease, while they are not found in normal controls. HLA DQ2, DR52, and Bw6 were found in the higher frequency of Eales’ patients, and are believed to be strongly associated with the disease. This may suggest that certain HLA haplotypes have a possible predilection for Eales disease [7]. It is hypothesized that individuals with a predisposition to HLA, predominantly HLAB5, DR1, and DR4, may develop retinal vasculitis as a consequence of cell-mediated immunologic tissue damage triggered by a sequestered mycobacterial antigen in an inactive form that clinically presents as Eales disease [1]. Human Leukocyte Antigen typing and MTB genome detection from the vitreous sample could have been done to the patient to support the diagnosis.

In the acute inflammatory stage, oral prednisone (1 mg/kg) is started and the dose tapered for 6-8 weeks. If the patient is intolerant to systemic corticosteroids or if macular edema develops, periocular depot corticosteroid/triamcinolone acetonide injections have been found to be beneficial [4].

Peripheral scatter photocoagulation of the ischemic retina is invaluable in the treatment of neovascularization. This is similar to the treatment used for other vasoproliferative diseases of the retina, such as diabetic and sickle-cell retinopathies. Several investigators have demonstrated favorable results with light- intensity, full-scatter argon laser photocoagulation to the nonperfused retina and to the junction of perfusion and non-perfusion [8-10]. Additionally, prophylactic pan-retinal photocoagulation in areas of the ischemic retina in asymptomatic fellow eyes of patients is effective in controlling the progression and future complications of this disease [11,12].

The presence of an occasional old healed tuberculous lesion and a positive Mantoux test have led many to think that hypersensitivity to tuberculoproteins plays a role in the causation of this disease. Antitubercular treatment is given in Eales' disease empirically. The ATT regimen usually includes two drugs (rifampicin 450 mg; isoniazid 300 mg once daily) for a period of nine months. This ATT treatment protocol is usually reserved for cases with acute phlebitis with massive infiltration, nodule formation, and complete obliteration of segments of the vein [2].

A study conducted by Patwardhan, et al. [13] showed that repeated intravitreal bevacizumab in patients with Eales disease with dense vitreous hemorrhage may not hasten the resolution of vitreous hemorrhage or reduce the need for vitrectomy. Moreover, tractional retinal detachment may be a serious complication of therapy and hence should be closely monitored because it entails a poor visual prognosis.

Eales’ disease is an idiopathic obliterative vasculopathy of the bilateral peripheral retina commonly affecting healthy young adult males. It initially presents as retinal periphlebitis and later as retinal ischemia, leading to vascular alterations, neovascularization, and vitreous hemorrhage [4]. Eales disease mimics a variety of infectious and inflammatory etiologies hence a thorough history, systemic evaluation, and diagnostic studies are necessary to exclude not only sight threatening but life-threatening conditions. Management is similar to common retinal vaso-occlusive diseases wherein prevention of further ischemia and neovascularization is the main goal of treatment. Surgery is reserved for cases with retinal detachment and for unresolving vitreous hemorrhage. Detection of Mycobacterium tuberculosis genome in vitreous samples by PCR as well as HLA typing could have been done to support the diagnosis of Eales disease.