Dyslipidemia and oxidative stress in patients of psoriasis

Psoriasis is a common chronic inflammatory skin disease with an unknown etiology. The aim of this research was to determine the lipid profile and levels of lipid peroxidation as malondialdehyde (MDA), antioxidant enzymes glutathione peroxidase (GPx) and superoxide dismutase (SOD) in patients with psoriasis. The levels of lipid profile were significantly al-tered in the patient group. Levels of MDA were significantly increased (p<0.001) where as the GPx and SOD were significantly decreased (p<0.001) in patients with psoriasis. These results provide some evidence regarding the role of increased reactive oxygen species and decreased antioxidant activity in psoriasis.

Skin is a major target of oxidative stress due to reactive oxygen species (ROS) that originate in the environment and in the skin itself. ROS generated during normal me-tabolism, are an integral part of normal cellular function, and are usually of little harm because of intracellular me-chanisms that reduce their damaging effects. Antioxidants attenuate the damaging effects of ROS and can impair and/or reverse many of the events that contribute to epi-dermal toxicity and disease. However, increased or pro-longed free radical action can overwhelm ROS defense mechanisms, contributing to the development of cutane-ous diseases and disorders [1]. Although ROS play a role in diseases such as skin cancer, their biological targets and pathogenic mode of action are still not fully under-stood. In addition, strategies useful in the therapeutic management of ROS action in human skin are still lack-ing.

Psoriasis is a common chronic and recurrent inflamma-tory skin disorder [2] that has been associated with ab-normal plasma lipid metabolism and high frequency of cardiovascular events [3]. This prevalence seems to be related to the severity of psoriasis, as it occurs more fre-quently in patients presenting large areas of the body af-fected with psoriasis lesions. Though dyslipidemia is known to occur, less is known about its status and asso-ciation with oxidative stress in patients of psoriasis.

Malondialdehyde (MDA), is a marker of oxidative stress and specific enzymes that limit free-radical formation, such as glutathione peroxidase (GPX), superoxide dismu-tase (SOD) play an important role in the protection of cell membranes against oxidative damage and may be used as indicators of anti-oxidative status. There are several stud-ies investigating the role of oxidant /antioxidant systems in the pathogenesis of psoriasis with discordant results [4,5].

Hence, this study was carried out to evaluate the oxidative stress and dyslipidemia in patients with psoriasis.

A case control study, approved by the ethics committee was carried out at NKP Salve Institute of Medical Sci-ences, Nagpur. Fifty patients of psoriasis with a mean age of 42.13 ±13.45 were included in the study. Fifty age and sex matched normal healthy controls with a mean age of 44 ± 12.74 were selected as controls. The patients were diagnosed by Auspitz sign, clinical features of psoriasis like erythema, itching, thickening and scaling of the skin. The clinical severity was determined according to the Psoriasis Area and Severity Index (PASI) score. Disease duration of the patients ranged from 1 month to 25 years. All the patients being treated only with topical agents such as corticosteroids, vitamin D analogues, dithanol during the six month period have been included in the study. Patients with any chronic inflammatory disease, diabetes mellitus, renal disorders, IHD, hypothyroidism, nephritic syndrome, obstructive liver disease, any other skin disorder were excluded from the study. All the pa-tients of systemic drug therapy of beta blockers, thiazides, retinoids, cyclosporine and lipid lowering agents in the recent 6 months were excluded from the study.

5 ml of venous blood samples was collected in EDTA bottle and plain bulb from patients with psoriasis and normal healthy individuals. Blood samples were centri-fuged at 3000g for 10 minutes and were estimated for lipid profile, lipid peroxidation and antioxidant enzymes( glutathione peroxidase and superoxide dismutase).

Serum total cholesterol, triglyceride and HDL-chloleste-rol were measured by an enzymatic kit. LDL-C was cal-culated according to the following formulae: VLDL-C=Triglyceride/5 and LDL-C= Total cholesterol-(VLDL-C + HDL-C).

This method was based on the fact that lipid peroxide condense with 1 methyl-2 phenyl indole (MPI) under acidic conditions resulting in the formation of a red chro-mophore. To determine specifically lipid peroxide in plasma, proteins are precipitated to remove water-soluble MPI reactive substance. The level of lipid peroxide is ex-pressed in terms of malondialdehyde, which is unstable. Tetramethoxypropane, which is converted quantitatively to MDA in the reaction procedure is used as standard.

In the enzymatic kit method, GPx catalyses the oxidation of glutathione by cumene hydroperoxide. In the presence of glutathione reductase and NADPH the oxidized glu-tathione is immediately converted to reduced form with a concomitant oxidation of NADPH to NADP. The de-crease in absorbance at 340 nm is measured.

As in Table 1, total cholesterol, triglycerides, VLDL, HDL-cholesterol and LDL-cholesterol were significantly altered (p<0.00) in patients of psoriasis. 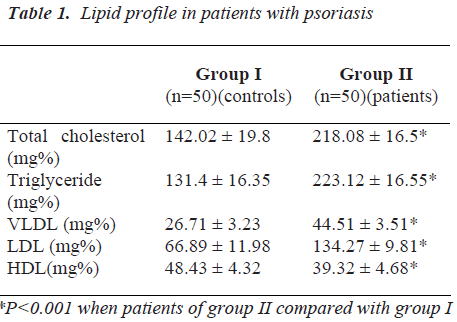 Table 2 depicts the levels of MDA (p<0.001)which were significantly elevated in psoriatic patients as compared to normal healthy controls. 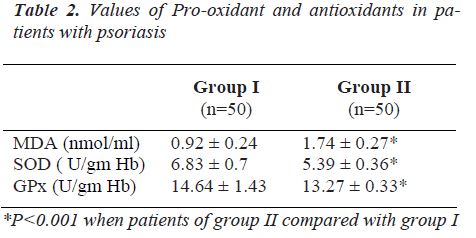 Table 2: Values of Pro-oxidant and antioxidants in pa-tients with psoriasis.

The levels of GPx and SOD antioxidants were significantly decreased (p<0.001) in psoriatic patients as compared to normal healthy controls (Table 2).

Psoriasis is a chronic inflammatory skin disease charac-terized by pathological skin lesions due to various exoge-nous and endogenous factors and is associated with a number of biochemical and immunological disturbances.
Psoriasis is considered to be an (auto) immune disorder, probably initiated by the overactive skin innate immune system, and maintained by immigrating activated type 1 T cells and abnormally proliferating and differentiating keratinocytes. A complex network of cytokines and chemokines mediates the pathological reaction, whereas the abnormal function of psoriatic regulatory T cells is likely responsible for the chronic nature of psoriasis [6].

Though conflicting reports are available regarding the serum lipid values in psoriasis [3,7,8,9,10], the potential role of lipid abnormality in psoriatic patients has been discussed. In our study, we found significantly high levels of total cholesterol, triglycerides, VLDL, and LDL-cholesterol in patients of psoriasis (Table I). Several mechanisms including an unhealthy lifestyle, activation of type 1 helper T cells, autoantibodies recognizing oxidized LDL and some medications used to treat psoriasis such as oral retinoids and cyclosporine may induce dyslipidemia in psoriatic patients [9,11,12]. Also structural and func-tional abnormalities have been found in nearly all the segments of the gastrointestinal tract in psoriatic patients [13]. Moreover, the level of antibodies against oxidized LDL correlates with the disease severity. Thus, psoriasis is a risk factor for hyperlipidemia and its possible subse-quent sequelae such as obstructive vascular disease can-not be excluded.

Increased production of free radicals may cause oxidative damage on biological biomolecules, cell membranes and tissues. The free radicals induced oxidation of polyun-saturated fatty acids results in the formation of lipid per-oxidation products such as MDA. Our study indicates an increase in the level of MDA (Table 2) in psoriatic pa-tients as compared to normal controls, which is in correla-tion with the studies of Gornicki A,[14] Rocha Pereira P et al [15] and Relhan V et al [16]. However, Yildrium et al [17] did not find any correlation in the levels of MDA in patients of psoriasis with that of controls. Correlation analysis reveals a significance in between the values of MDA and Total cholesterol (0.66, p<0.001), LDL-C (0.74, p<0.001) and VLDL-C(0.68,p<0.001) in patients with psoriasis. Thus, our result supports the finding that psoriatic patients are associated with an increased mortality and morbidity from cardiovascular events [3,18,19].

Increased ROS production in patients of psoriasis [20] and decreased concentration of antioxidants leads to oxi-dative stress, which indicates lipid peroxidation. This may lead to cell damage by continuous chain reactions. In addition, it may be responsible for activation of phosphol-ipase A2, production of many mediators by arachidonate, deactivation of adenylate cyclase and activation of guany-late cyclase leading to decrease in the cAMP/cGMP ratio responsible for epidermal proliferation in patients of pso-riasis [21].

Data suggests that sera from patients with psoriasis have an increased capacity to activate PMNs and induce increased superoxide anion (O2+) generation. Increased generation of superoxide anion radicals from neutrophils and neutrophil accumulation in psoriatic lesions results in superoxide production during the phagocytic reaction. Early and active psoriatic lesions are characterized by the intra- epidermal penetration of PMNL and thus superox-ide, an oxygen derived material plays an important role [22]. Superoxide dismutase, an antioxidant enzyme, catalyzes the dismutation of superoxide into the less harmful mlecules, oxygen and hydrogen peroxide. Our study reveals a decrease in the levels of antioxidant en-zyme SOD (Table 2). This is in concordance with the studies of Yildrium [17], Pujari [23], Kural [22], Drewa [25], and Kobayashi [26]. However, Utas [27] and Baz et al [5] found an elevated level of the antioxidant enzyme plasma SOD patients of psoriasis. In our study, the de-crease in the levels of antioxidant SOD in patients of pso-riasis is probably to counter act the stress caused by oxi-dation.

Cells contain enzymes GPx which change the hydroper-oxide group to the much less toxic hydroxyl moiety. Similar to our GPx results as in Table 2, Kokcam [28] observed that GPx was found to be significantly de-creased in patients with psoriasis as compared with the values from sex-age matched healthy controls. Selenium being an integral part of the enzyme GPx, reduction in the enzyme activity leads to the accumulation of hydroxyl radicals in inflamed tissue. Supplementation with Se has also shown to benefit patients with acne [29] and to re-duce ultra violet-induced inflammation in hairless mice [30]. Michaelsson et al [31]. and Farris et al [32] have also demonstrated a decrease in the levels of whole blood and plasma selenium in patients with psoriasis.

In conclusion, hyperlipidemia along with increase in lipid peroxidation and decrease in antioxidants levels are a fea-ture of psoriasis. Inactivating the effects of free radicals and stabilization of the cell membranes thus preventing new epidermal destruction can be achieved by antioxidant supplementation, which can be used as a theurapeutic approach.