Chronic skin eruption like severe scarring Acne vulgaris, Rosacea and Chronic Atopic Dermatitis have a deeper than skin connection to diseases of our internal organs. The relationship of small gut dysbiosis due to gut immobility, stasis, breakdown and atrophy of the intestinal linings and gastrointestinal reflux enhance inflammatory cytokines, toxins, trace elements reaching the brain, skin and other organs of the body. With advances of modern science and technology, Central Nervous System (CNS) neurological disorders like Parkinson disease (PD), Chronic depression and Autism may be intrigued in this complex brain-CNS-Gut-Enteric microbiota – Skin axis jig saw puzzle.

The Gastrointestinal (GI) tract especially small intestinal epithelial barrier defects; which primarily function as an important first line physiological, immune and endocrine absorption organ may become aberrant as a result to genetic predisposition and western life style dietary habit. The breaking down of the epithelial cells tight junctions allows diffusions of toxins released from a modern western diet mainly composed of a high content of processed carbohydrate: high sugar and fats ratio relative to low fibres contents, pollutants like heavy metals, preservatives, pesticides, infections, prolonged antibiotics intake, with a low pH environment into the body circulation. This loss of epithelial cells cohesion of small bowel termed as “ leaky gut” has immense consequences to the understanding and pathogenesis of skin disease like rosacea, acne vulgaris and atopic dermatitis; rheumatological disease like rheumatoid arthritis, endocrine diseases like thyroid diseases and adrenal impairments, large bowel disease like inflammatory bowel diseases(IBD), oral cavity and sinus disease like hay fever and interestingly to some of our brain cognitive disorders like depression, autism and Parkinson disease. Though exact detailed pathogenetic pathways, signalling and control mechanisms is still not fully elucidated; factors like malabsorption, autoimmunity with autoantibodies formation to specific organs, inflammation and breaching of the blood brain barrier allowing toxins, cytokines and other signals breach through the blood brain barrier allowing deliverance into our CNS are strongly suggestive (Figures 1 and 2). 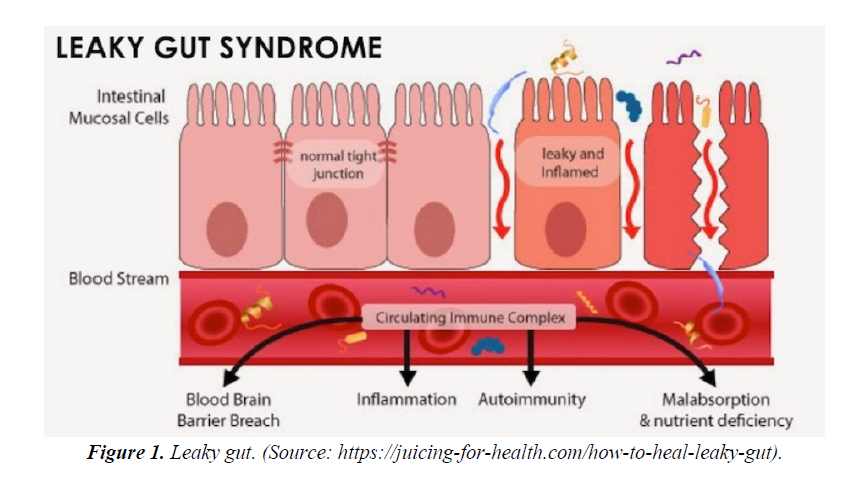 In Rosacea, a more complex interaction between the brain, nervous system, cardiovascular system, the gut and the skin take place. The prevalence of celiac disease, Crohn’s disease, ulcerative colitis, Helicobacter pylori (H. pylori) infection, irritable bowel and small intestinal bacterial overgrowth were all higher among Rosacea patients than the study controls [9-11]. Stressors of Rosacea like spices, stress and heat act through the widely distributed Transient Receptor Potential (TRP) channels receptors family; TRPV1, TRPV2, TRPV3, TRPV4, TRPA1 and TRPM located on neuronal endings sensitize the autonomic nervous system both the sympathetic and parasympathetic pathways causing vasodilatation like flushing and hyperalgesia stinging sensation [12,13]. Nerves containing Calcitonin genes related peptide (CGRP) may be linked to flushing through the messenger cAMP. TRPV act like a N-methyl-D-aspartate (NMDA) receptor cause calcium influx thus changes transmembrane potential transmits signals to the cardiovascular system via the CNS. The angiogenesis and inflammatory insults cause a direct neurogenic vascular effect on the facial sensitive dry skin resulting erythema, telangiectasia, papules and pustules; pathognomonic phenotypic manifestations of Rosacea [14]. Epidermal barrier defects and body self - defence to pathogenetic bacterium in the skin epidermis and intestinal mucosa with the production of potent antibacterial cathelicidin (LL37); produced through the Kallikrein 5 pathway involving the Matrix metalloproteinases (MMP). LL-37 has been demonstrated to be a major pathogenetic factor in causing rosacea through inflammation and angiogenesis of skin [15-18] Auto - antibodies has been detected against H. pylori in Rosacea give evidence that stasis, reflux, an acidic pH environment of the small intestine favour proliferation, invasion and pathogenicity of H. pylori [19]. Systemic antibiotics including the macrolide group is efficacious in managing Rosacea clinically especially the papulopustular subtypes [20]. A reduction of gut transit time using a high-fibre intervention resulted in improvement of Rosacea. Other enteric bacterium in the small gut including the oral cavity may also be involved and should be investigated.

Leaky skin behaves similarly as the leaky gut; the outside world invades but inside world drain and get exhausted. Emerging evidence suggested that if there is a better control and management of the innate defective skin; i.e.; minimizing Trans Epidermal Water Loss (TEWL), desensitisation of allergens and maintenance of a healthy microbial flora over the skin surface, associated AD diseases like food allergies, rhinitis, hay fever, asthma and irritable bowel may be reduced in incidence [21]. Food allergies is highly associated with AD and up to one third of patients with skin allergy has inflammation of gut. Synbiotics defined as probiotics in combination with prebiotics have been shown to be beneficial in the management of AD. The former is living cultures while the latter is indigestible polysaccharide which can stimulate the growth of the former. The mind with all its cognitive domains have an effect on AD. Sleep disturbances, emotional disorders like depression and compulsive disorders are main cognitive players; though not exclusive; in severe AD especially during the kicking off of the itch-scratch cycle [22,23]. Recognition and understanding of the Brain–Gut– Enteric microbiota – Skin axis interplay is essential to managing doctors in managing the AD children or adults and their families. This is a crucial step to enable the best management of chronic recalcitrant AD either in children or adults. Liberal applications of moisturizers, use of appropriate cleansers, life style adjustments, avoidance of triggers, balanced diet with avoidance of processed foods, cognitive behaviour therapy, relaxation, meditation and state of the art medications should all be explained and discussed in details; especially the pros and cons; to the individual patients [23,24]. Personalized treatment strategy involving the patients and concerned family members should be worked out and planned in advance and proactively before flare during remission to achieve the least distress and sufferings of the chronic AD patients [23].

Parkinson Disease, Gut and the Skin

The aetiology of PD is multifactorial and complex but also illustrated the CNS–Gut–Skin axis relationship [25-29]. Genetic predictions like R1441G mutation, LRRK2 mutation, Parkin and PINK 1 mitogenic mutation and the deleterious effects of 1-methyl-4-phenyl-1,2,3,6-tetrahydropyridine (MPTP) causing mitochondrial dysfunction are known causations [25]. Recently the accumulation of a neuronal protein transfers from the gut, glial cells and enteric nervous system (ENS) deposited in the substantia nigra (SN) of the basal ganglion of the brain cause gradual dopaminergic neuronal cell deaths through apoptosis and inflammation is under active research [30-32]. There is a gradual depigmentation of the SN in PD compared with the studied controls due to the loss of neuromelanin. Non- Motor Parkinsonism (NMP) manifestations are diverse but include the GI tract and the skin. Gut immobility, constipation with the subsequent bacterial overgrowths and dysbiosis of the gut lining favour absorption of toxins. H pylori may play a role in PD. The neuronal protein under intense study is called α- synuclein. α- synuclein is a neurotoxic protein when accumulate can cause cell deaths with the formation of Lewy Bodies found in the dopaminergic neurone in the brain in PD. Lewy Bodies are pathognomonic of PD in histopathology. α- synuclein and Lewy Bodies are found widely distributed in the ENS of the gut, olfactory bulbs, sympathetic and parasympathetic ganglions, spinal cords, neuronal cells of the brain and the skin. The gut microbiota interaction with the enteric neurons, enteric glial cells as counterpart of the brain astrocytes seem to be involved due to the dysfunction of GI tract and develop PD. Much like food allergies and AD, PD patients neuro chemical changes with production of inflammatory cytokines with impairment of intestinal epithelia barrier has been observed. There are also dysregulation and loss of enteric glial cells with α- synuclein formation. A positive correlation between gut permeability and deregulation of enteric glial cells and intestinal α- synuclein have been confirmed in studies. α- synuclein plays a crucial role in neuro-inflammation by triggering on/off potentiating glial cell activity. Caffeine ingestion and cigarette smoking reduce small gut inflammation leads to less aggregation of Synuclein in the ENS, known to decrease the risk of PD. A rostrocaudal gradient of synucleinopathy within the GI tract with submandibular gland and lower oesophagus having the highest density of Lewy Bodies followed by the stomach, small intestine, colon and rectum [25]. This rostrocaudal distribution of Lewy pathology coincides with vagal innervation from dorsal motor nucleus of the vagus (DMNV) as well as the distribution of dopaminergic neurones in the ENS [25]. Furthermore, peripheral induced inflammation can induce central inflammation and result dopaminergic pathway degeneration.

Apart from the gut, nonmotor manifestations of PD also involve the oral cavity with diseases like periodontal diseases, poor oral hygiene, dental problems with loss of teeth and bad breath [33]. A Dual hit theory has been postulated that neurodegenerative process starts in the olfactory bulbs and ENS of the gut after following inhalation and ingestion of a neurotropic infectious proteinaceous agent [34]. A possible candidate is the prion protein. The neuropathological process that leads to PD seems to start in the upper part of the gut with synucleinopathy throughout the whole GI tract. The ENS, the gut microbiota dysbiosis participate and enhance the active transport of α- synuclein via the vagal nerve to the CNS [35,36]. Maintaining the balance of microbiota of the gut and its environment may provide a beneficial effect to prevent the development of PD; mimicking the scenario of synbiotics prevention in children developing AD. Dietary advises with appropriate probiotics and prebiotics administration at relevant time and dosage may be a cost-effective solution in the prevention of PD [37].

Early stage of PD is easily recognised from the skin [38]. There are many skin manifestations of PD like seborrhoea in post encephalitic PD. Severe seborrhoea and scarring acne is referred by some as pre-motor feature of PD. There is a frequent overlap between patient presented with seborrheic dermatitis and PD. The pathological Malassezia yeasts especially the Malassezie globosa has a higher density in PD skin. Hyperhidrosis is not uncommon in PD patients particularly after taking Levo-Dopa. Flushing due to vascular instability and bullous pemphigoid due to autoantibodies formation to epidermal barrier are reported skin associations. The skin of PD patients should be carefully examined and documented for evidence of early sign of melanoma as α- synuclein is implicated in the pathogenesis of the latter [39,40]. Testing of α- synuclein in skin histology through small punch diagnostic skin biopsy is a safe, minimally invasive clinic base procedure which has been shown and should be further scientifically studied as a cost- effective screening strategy of early NMP [41,42].

The physiological interaction of the most superficial layer of the body: skin and the most inner organ: the gut through the peripheral and central nervous system maintain homeostasis, defence, sensory, absorptive and cognitive functions of our body enable us to survive and remain healthy in an unstable ever changing ecological surroundings. Environmental factors including pathogens, pollutants, dietary habits and genetic predisposition result from bad gene mutations interact with dysbiosis of the gut perverted microbiota generate clinically seemingly unrelated diseases. The GI tract especially its motility and dysbiosis, CNS with its cognitive and movement domains, peripheral nervous system and skin should be integrally studied in many previously chronic, difficult- to- treat diseases. In this short review, Acneiform facial skin eruption, Chronic Atopic Dermatitis, Parkinson Disease are revisited and discussed under this perspective. Understanding the physiological interplay of these organs and its subsequent pathogenic state upon viscous insults enlighten us how internally the body system works integrally. This may provide us new insight how nature works and therapeutically; better management strategy for these distressing conditions.

Part of the article materials are extracted from discussions during the conference sessions of the Proceedings of the 17th European Dermatology Congress held in Paris, France; 1-3 March. 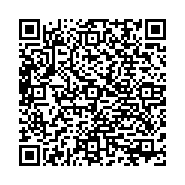