Polycystic Ovary Syndrome (PCOS) is the most common endocrine disorder in women of reproductive age, affecting 6-16% of these women [1,2]. PCOS is characterized by a clustering of hyperandrogenism, hyperinsulinemia, hypersecretion of LH, menstrual disorders, and oligo/ anovulatory and infertility [3,4]. Oligoovulation occurs in 13.1% of women under 30 years old [2]. PCOS women with severe oligoamenorrhea and anovulation display a more severe phenotype characterized by more severe hyperandrogenism and a higher prevalence of abnormal metabolic and cardiovascular risk parameters than ovulatory patients with PCOS [5]. The cause of the change in ovarian function and anovulation, which affects a subgroup of these women, remains unknown.

AMH is a dimeric glycoprotein and a member of the Transforming Growth Factor-b (TGF-b) family of growth and is produced by the granulosa cells of preantral and small antral follicles in women [6], which are involved in the regulation of folliculogenesis. Because AMH is secreted exclusively in the gonads, its serum concentrations in women are thought to reflect the size of the ovarian follicle pool. Certainly, the serum AMH concentration appears to be greatly increased in most patients with PCOS [7,8]. Increased serum AMH in women with hyperandrogenism and/or oligo-anovulation could indicate to clinicians the presence of PCOS when reliable ultrasound is not available [9]. In addition, AMH levels can help to assess ovarian response potential and guide ovarian stimulation while avoiding OHSS [10]. To date, AMH has developed into a factor with a wide array of clinical applications, mainly based on its ability to represent the number of antral and pre-antral follicles present in the ovaries [11]. Saleh showed the efficacy of serum AMH measurement as a prognostic biochemical marker in the follow-up of metformin treatment of PCOS women [12]. AMH may serve as a reliable tool to characterize the severity of the syndrome, as well as for monitoring and forecasting, and it may also be used as a marker of polycystic ovaries in PCOS [2,13,14]. However, results are inconclusive regarding the effect of ovarian response on stimulation after low-dose gonadotropin in OI in patients with PCOS [15,16].

From March 2014 to April 2015, the study consisted of 34 volunteer reproductive women between 22 and 34 years old. This study was approved by the local medical ethics review board. All participants of the study had given their written informed consent. All subjects were selected from the Outpatient Department of Gynaecology and Obstetrics in Liaocheng People’s Hospital. The diagnosis of PCOS was based on the Rotterdam criteria [17]. None of the women had any chronic diseases. In addition, none of the women had used hormones or other medications for 6 months prior to the study. Oligomenorrhea was defined as a cycle length>35 days. The women were divided into two groups: the oligo-ovulation group (n=22) and the anovulation group (n=12). Non-activated antral follicle was defined as anovulation over 60 days.

Overnight fasting blood samples were collected from all subjects in the early follicular phase (days 2-3) after spontaneous menstruation, and transvaginal ultrasounds were performed.

Age, Body Weight (BW), Body Mass Index (BMI), E2, FSH, LH, T, PRL, P concentrations, Fasting Blood Glucose (FBG), Fasting Insulin (FINS), and Homeostasis Model Assessment for Insulin Resistance (HOMA-IR) were measured on day 2-3 of spontaneous menstrual bleeding. HOMA-IR=(fasting plasma glucose (mmol/L) × fasting plasma insulin (mIU/L))/ 22.5 [18]. Then, serum E2, LH, FSH, and T concentrations and follicular development were determined every 7 days. When the follicular diameter was up to 10 mm, it was measured every 3 days until mature follicle ovulation. The final measurement was taken on seventh days (D7) after ovulation. Non-activated antral follicle was defined as anovulation over 60 days, and monitoring was stopped. Serum AMH concentration was measured on day 2-3 of the menstrual cycle (T1) at selection of the dominant follicle (T2); the time of mature follicle (T3) in oligo-ovulation PCOS women was taken once, whereas in anovulatory PCOS women, it was taken at two time points (T4=on day 2-3 of the menstrual cycle; T5=on approximately day 60 of the menstrual cycle). The day of selection of the dominant follicle was defined as the day on which a follicle reached a diameter of 10 mm or larger and remained enlarged during subsequent days until ovulation.

Transvaginal US (TVUS) was performed on each patient using a 6.5 MHz endovaginal probe. Ovarian volume was calculated for each ovary using the formula for a prolate ellipsoid: 0.5 × length × width × thickness. Ovarian Volume per ovary (OV) was defined as the average of the ovarian volume obtained from both ovaries [19].

The baseline characteristics of the PCOS phenotype were taken on day 2-3 of the menstrual cycle and are expressed as the means ± Standard Deviations (SD). Some of the hormonal concentrations were expressed as a median and range because some of the hormonal variables were not normally distributed. Serum AMH concentrations and continuous variables were presented as medians and ranges. Distributions were compared using the non-parametric Mann-Whitney U-test and Kruskal- Wallis Test. Relationships between AMH and other variables were evaluated by Pearson’s Correlation Coefficient (PCC). P<0.05 was considered significant. Statistical analysis was performed using SPSS, version 17.0 (SPSS Inc.).

The comparison of the means of BM, BMI, partial of hormonal and metabolic concentrations (PRL, P, FBG, FINS and HOMA-IR) in both groups is shown in Table 1.

Table 1: Relevant clinical, hormonal, and metabolic features of 34 PCOS women on D2-3 of the menstrual cycle.

Table 2: Ovarian parameters as measured by ultrasound on D2-3 of the menstrual cycle. 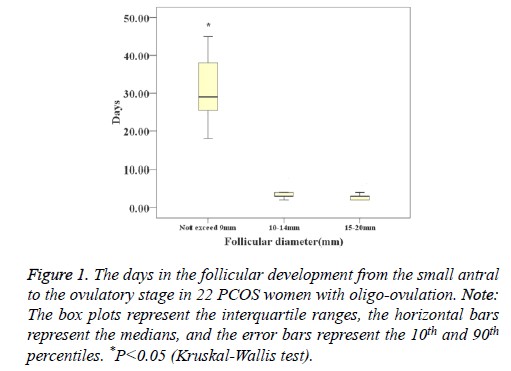 Figure 1: The days in the follicular development from the small antral to the ovulatory stage in 22 PCOS women with oligo-ovulation. Note: The box plots represent the interquartile ranges, the horizontal bars represent the medians, and the error bars represent the 10th and 90th percentiles. *P<0.05 (Kruskal-Wallis test). 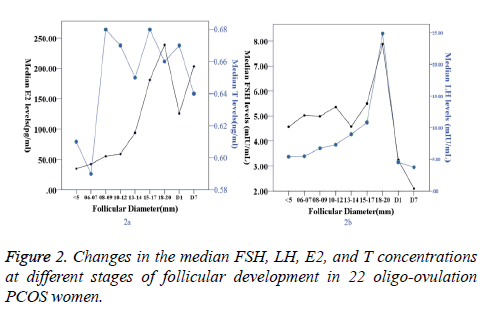 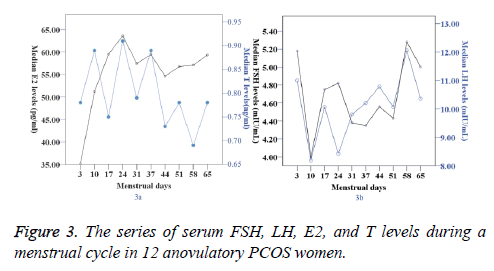 Figure 3: The series of serum FSH, LH, E2, and T levels during a menstrual cycle in 12 anovulatory PCOS women. 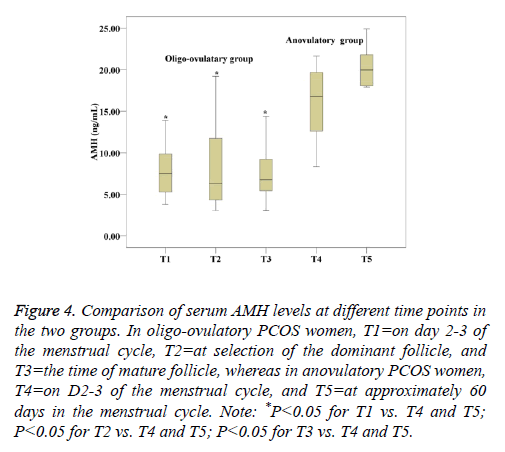 Table 4: Correlation coefficient of serum AMH concentrations with different variable in 34 PCOS women on D2-3 of the menstrual cycle.

Up to 75% of PCOS women are reported to be infertile. Anovulation and oligo-ovulation are important characteristics of PCOS. Forty-eight per cent of the patients showed evidence of follicular development [20]. Our data showed that the mean days of ovulation were 37 (28-42.5) days in oligo-ovulation PCOS women. The activation of antra follicles requires a relatively long platform period and, once antral follicles are activated, they require only a short time to mature.

The majority of women with PCOS have insulin resistance, which is believed to play a fundamental role in the pathogenesis of PCOS [22]. Our data showed that PCOS women with oligo-ovulation had lower FINS and HOMA-IR values compared to the anovulation group. This indicated that higher FINS women with PCOS are more likely to be anovulatory. In summary, endocrine and metabolic factors appear to influence the development of anovulation in PCOS women, but these factors do not exclude the possibility of an intrinsic abnormality of folliculogenesis in PCOS.

Some previous studies provided OV and the 2-5 mm follicle number was positively correlated with androgen levels in the PCOS group [23]. OV is a reflection of the number of small antral follicles present in PCOS, which are the only source of AMH. In our study, the number of visible antral follicles and the OV (ml) in the anovulation group were higher than in the oligo-ovulation group. Turhan et al. suggested the importance of ovarian volume measurement as an indicator of androgen production in PCOS women and reported a significant positive correlation between ovarian volume and serum, LH and T levels [24]. According to our results, there was a positive correlation between AMH, AFC and OV in the two groups, and this result was corroborated by another study [25]. The correlation between AMH, OV and AFC suggests that AMH may be able to replace the ultrasound ovarian morphology criterion in the diagnosis of this syndrome.

The role of AMH in folliculogenesis in humans has not yet been studied in detail. Several studies had shown that AMH expression remains high until a follicle reaches a diameter of approximately 8 mm, and expression is very low in larger antral follicles [26,27]. However, in our study, we found that serum AMH concentrations remained constant during the growth and development of antral follicles in oligo-ovulation PCOS women. Other studies [15,16] have also found that serum AMH concentrations were constant during low-dose ovulation induction in patients with PCOS. This may mean that AMH does not participate in either ovarian primordial follicle recruitment or dominant follicle selection.

In a study by Pellatt et al. AMH production was on average 75 times higher per granulosa cell from anovulatory PCOS and 20 times higher from ovulatory PCOS than healthy ovaries [28]. This result was supported by our study, which found that PCOS women with anovulation showed higher AMH concentrations in different periods of menstruation, possibly due to both the increased number of small antral follicles and intrinsic characteristics of those granulosa cells, which may contribute to anovulation. Our study also showed that serum AMH levels are not affected by the day of the menstrual cycle and are closely correlated with ovulation status. Hence, AMH may be a marker in the diagnosis of PCOS at any time of menstruation. According to the results of this study, it can be stated that high AMH concentrations present in women with PCOS play an integral role in causing anovulation due to AMH’s inhibitory influence on the actions of follicle-stimulating hormones, which normally promote follicular development from the small antral to the ovulatory stage.

Androgen excess in PCOS not only disturbs the delicate balance between androgens, AMH and FSH, but also crucially contributes to ovarian tissue remodeling: stromal hyperplasia and rigidity, hyper vascularity and inflammation. This joint follicular-stromal deregulation is a key mechanism in the pathogenesis of PCOS [29-31]. In our study, serum T levels remained constant in the growth and development of follicles in the oligo-ovulatory group, but circulating T, LH, and AMH levels are significantly higher, which underscores the likely important role of androgens in the dynamics of folliculogenesis in anovulation PCOS women. Pierre et al. found that LH reduces AMHR-II expression in granulosa luteal cells collected from women with normal ovaries and ovulatory PCOS, but not in women with anovulatory PCOS [32]. Although the association between the morphogenesis of the polycystic ovary, androgen excess and elevated serum AMH remains unexplained, serum AMH levels were correlated with the severity of PCOS and specifically with the severity of both hyperandrogenism and oligo-anovulation [33,34]. Our study and others also found a positive correlation between AMH and T in PCOS women with oligomenorrhea [35]. Our results suggested that, while the factors responsible for regulating the spontaneous initiation of follicles remain to unclear, serum T, LH concentration, antral follicles, and OV (ml) may play a role; these findings are also supported by Dissen [36], who found that increased LH secretion, T levels, oocyte-derived peptides, and intraovarian proteins may be implicated in abnormal follicle growth and development. Additionally, a yet undiscovered inherent defect in folliculogenesis may exist.

Limitations and Reason for Caution

The number of patients in this study is small. Future research on a larger scale is needed to confirm our findings.

We acknowledge Xiaohui Deng who contributed towards the study by making substantial contributions to conception, design, acquisition of data, or analysis and interpretation of data, and Bin Wang was involved in drafting the manuscript or revising it critically for important intellectual content.

The authors do not have any possible conflicts of interest.