Rapid growth of recommender systems (RSs) had proved its potential in the generation of personalized recommendations in various application domains. Generally, RSs learn the user's preferences and interests to suggest relevant items to the users. RSs are widely employed in various domains such as movies, e-commerce, travel, etc. Due to rapid growth in travel applications, Travel Recommender Systems (TRSs) had received a significant attention from researchers. Though existing TRS help users as digital support assistants in the travel, still the TRSs faces huge barriers in understanding user interests based on user's current emotional context. In this paper, to generate effective personalized Point of Interest (POI) recommendations, we present a Dynamic Particle Swarm Optimization and Hierarchy Induced K-Means (DPSOHiK) approach for the better POI clustering through utilizing electroencephalography (EEG) feedback. The DPSOHiK approach, with its capabilities to adapt the changing attributes helps in the POI clustering process. The clustered POIs are utilized in the recommendation process and based on the user's personal preferences the POIs are ranked to meet the requirements of the user. We have experimentally evaluated our proposed recommendation approach to demonstrate the recommendation potential and compared the obtained results with the baseline approaches. The experimental results depict the importance of EEG feedback in the enhancement of recommendation accuracy and provide helpful insights to the researchers to utilize EEG in the RSs research and development.

The recent development of the internet technologies has created enormous information which reflects with the information overload problem. The users and online service providers face difficulty in discovering relevant information to provide personalized services [1]. To help users to find pertinent information from the web, recommender systems service as a digital assistant tools in various application domains. However, the personalization is a major issue with the exiting Recommender Systems (RSs) [2]. To enable users to find interesting locations in the travel domain, RSs employ various filtering mechanisms based on the user's constraints and preferences. The filtering approaches can provide various recommendations according to the user's current context. Among the travel recommender systems, the emotional context of the user is very important to determine relevant list of locations to achieve better satisfaction to the user. But still, the RSs faces barrier in understanding the interests based on the changing emotional context of the users. To address the aforementioned issues, recent researches had utilized the emotional context of users to classify the items to make recommendations [3,4]. Yet, the RSs find difficulty in detecting the current emotional changes of the user and hence recommending locations based on the changing user's emotion in the real-time scenario. Presently, under travel recommender systems research and development, there is a huge requirement for the comprehensive system for better categorization and recommendation generation.

In this work, we address the above mentioned limitations of the recommender systems through utilizing electroencephalography (EEG) to incorporate user feedback for the generation of personalized location recommendations. The recent research on the EEG utilization has created new paradigm of personalized systems [5-7]. We present a model to correlate the attributes of the locations with the current EEG feedback of the user to generate better satisfiable recommendations. A new combinational algorithm of Dynamic Particle Swarm Optimization and Hierarchy Induced K-Means algorithm (DPSOHiK) is proposed for enhancing the clustering and location categorization. We employ Collaborative Filtering (CF) for the generation of recommendations, based on the opinions of the similar users and the preferences of the active target user. The feedback and the opinions of the similar users are used to organize the recommendations for the active target user and the preferences are used as weights to filter the appropriate recommendations to enhance the personalization. The better personalized recommendations represent the interactive relationship between the user preferences and location attributes. Further, the recommendation of suitable and apt locations to the user reveals the comforting effect. The significant changes of user's EEG can be observed with different types of location visits. We have employed a post- EEG detection module to analyze the user's feedback after visiting the recommended location. The EEG data is analyzed to infer the relationships between the users and locations to improve the recommendations in effective and satisfiable manner.

Recommender systems intend to analyze the interests, tastes, characteristics and preferences of the users to generate personalized recommendations. RSs have been employed in many application domains such as movies, news, music, tourism and travel, etc. [8]. To help users in the selection of appropriate items or services, RSs exploit user data such as ratings, preferences and demographic information. There are four major types of recommendation generation approaches employed in the RSs namely Collaborative Filtering, Content- Based filtering, demographic filtering and hybrid approaches [8-11].

With the rapid development of brain-computer interfaces, computational neuroscience and cognitive neuroscience had created significant demand in the design and development of emotion-aware systems. To meet the growing demand of the emotion-aware RSs, emotion factors of the user is incorporated to generate personalized recommendations [12]. Chin et al. [13] had presented a new emotion profile-based music RS through utilizing the user's emotion profile and historical personal query responses to make personalized list of music tracks as recommendations. Orellana-Rodriguez et al. [14] had developed an automatic context extraction method to explore the role of emotion in the short films. Nevertheless, the existing emotion-aware RSs aim to generate the personalized recommendations but none of them had focus to estimate the correlation between the user's current emotional contexts and present requirements to generate better recommendations.

With the strong capabilities of the global optimization possessed by Particle Swarm Optimization (PSO) algorithm, it is used with the K-means algorithm as a hybrid algorithm to exploit the advantages of excellence in the local search ability [15]. The utilization of dynamic inertia weight makes the hybrid PSO and K-Means combinational algorithm as DPSOK algorithm possessing equilibrium optimization capability [3]. The K-means algorithm can be combined with hierarchical features to enhance the similarity threshold value during the clustering process [16]. To address the aforementioned issues of clustering in the real-time recommendation problem, we present a new combinational algorithm of Dynamic Particle Swarm Optimization and Hierarchy Induced K-Means algorithm (DPSOHiK) for the better clustering.

Our proposed DPSOHiK based POI recommendation approach employs electroencephalography feedback from user to generate personalized list of POIs as a recommendation. Our hybrid recommendation approach comprises of three main phases as EEG feedback acquisition phase, POI clustering phase, and Recommendation phase. A neat organization of our proposed recommendation approach is depicted in Figure 1. In the first phase the user's brainwaves are collected to analyze the initial and post emotional context with respect to the POIs recommended and visited. The EEG wave characteristics are used to score the brain wave accordingly and Table 1 presents the different types of brain wave along with its velocities. In the second phase the features are extracted from the POIs of LBSN (Location Based Social Network) for the analysis and clustering of POIs based on similarities to be utilized for the generation of recommendations. In the third phase we generate POI recommendations based on our Social Pertinent Trust Walker (SPTW) approach [8]. Finally the predicted relevant POIs are ranked and organized as a list POIs to be recommended to the user. 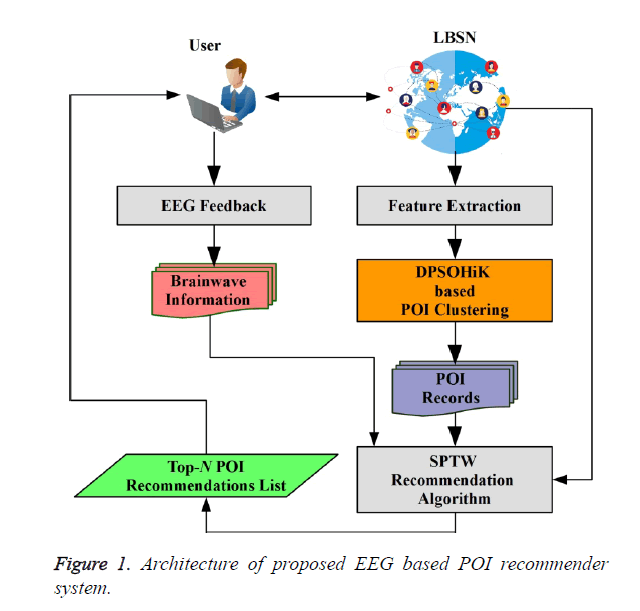 Table 1. Different brainwaves and its characteristics.

Particle Swarm Optimization (PSO) is the swarm intelligent technique developed to generate optimal solutions for the problem in the N-dimensional space. Every particle in the dimensional space has its own position, velocity and fitness value determined by the optimization function. Every particle has the best position of its own known as particle best and the overall best position of the whole swarm is known as the global best. Initially, the random solutions are generated followed by the computation process to determine the fitness value. Based on the computed fitness value, the position and velocity of each particle is updated. Finally, every particle with respect to current optimal position searches for the better solution until the overall optimal solution is obtained.

Where, inter_weimin and inter_weimax is the minimum and maximum inertia weight respectively. fitnessparti represents the current fitness value of the particle parti. fitnessgmin and fitnessgaverage represents the current minimum and average fitness of all particles respectively. fitnessgmin and fitnessgaverage is computed as follows.

After clustering the POIs of the LBSN, the entire recommendation process is carried out by SPTW algorithm. The most preferred POI cluster is determined for the active target user through utilizing the EEG feedback and user's explicit and implicit preferences. The user's current location is used to filter the POIs to enhance the recommendations and increase the possibilities of visiting them.

We experimentally evaluate our proposed DPSOHiK approach for analysis of effectiveness, accuracy and performance of the EEG feedback based POI recommendation. Experiments were conducted on a PC running on 64-bit Windows 7 operating system with Intel core i7-5500U clocked at 3.00 GHz and 16 GB of memory. We have utilized precision and hit-rate, popular evaluation metrics to evaluate the recommendation performance of our approach. For required POI database, we have exploited Foursquare dataset for the recommendation generation process [17]. The obtained results we compared with the traditional approaches of PSO and K-Means.

Precision metric represents the ratio of the number of discovered POIs to the number of recommended POIs and it is computed as follows.

Hit Rate is a performance evaluation measure used to evaluate the generated recommendations. The large hit rate values represent the better performance of the recommendation algorithm and it is computed as follows. 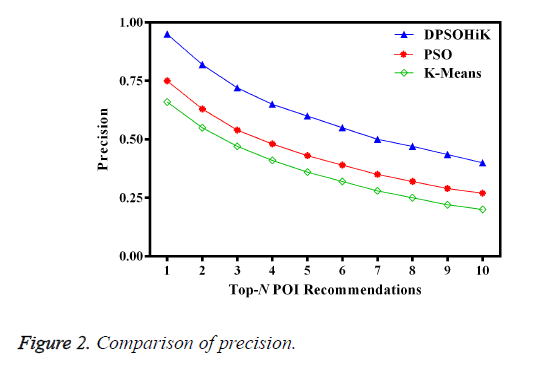 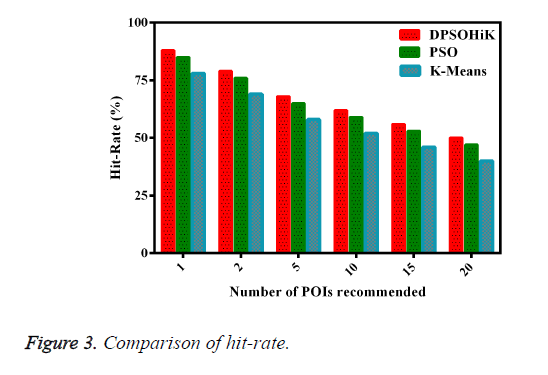 In this paper, we focused on the POI recommendation based on users EEG feedback. We attempt to develop a Dynamic Particle Swarm Optimization and Hierarchy Induced K-Means (DPSOHiK) approach for the better POI clustering. The pre-clustering of POIs of the LBSN is used in the recommendation generation process to improve the processing time. The analysis and utilization EEG feedback helps in the discovery of better relevant POIs and also improves the visiting rate of the recommended POIs. The experimental results depict the enhanced recommendation performance of DPSOHiK approach over PSO and K-Means through precision and hit-rate evaluation metrics. As a future work we intend to develop a EEG based POI recommendation approach to meet the changing demands of the users in real-time scenario.

The authors are grateful to Science and Engineering Research Board (SERB), Department of Science & Technology, New Delhi, for the financial support (No. YSS/2014/000718/ES). Authors express their gratitude to SASTRA University, Thanjavur, for providing the infrastructural facilities to carry out this research work.