Drug-Induced Autoimmune Hepatitis (DIAIH) is a major part of autoimmune hepatitis (AIH). However DIAIH remains poorly characterized, especially how to differentiate DIAIH from AIH in clinical and histology. Moreover, immunosuppression treatment effectiveness has also rarely been discussed so far. In the present study, the clinical data of AIH (n=73) and drug-induced liver injury (DILI) (n=395) in Rizhao People’s Hospital during 2010 to 2014 were retrospective analysed. All AIH patients were diagnosed by simplified diagnosis criteria (2008). DIAIH were drug induced patients with positive autoimmune antibody. The results shown that all 50 AIH cases and 33 DILI cases were identified with available clinical, biochemical and histological data. Eighteen (18/395, 4.55%) of DILI patients were found to be autoimmune antibody positive (named DIAIH). Sex and age at diagnosis of AIH patients were similar to that of DIAIH, ALT, AST and bilirubin levels of DILI and DIAIH patients were significantly higher than those of AIH patients (P<0.05, respectively), and immunoglobulin of AIH patient was significantly higher than that of DIAIH (P<0.05). None of AIH patients could retreat immunosuppression successfully during follow-up, but most DIAIH patients could. AIH is prominent of portal/ portal fibrosis and Rosette formation, interface inflammation and infiltration of plasma cells. With DIAIH, it is mainly consisted by peri-central-venous inflammation and with esophilia cells dominant mixed cells. Conclusion: DIAIH is different from AIH in liver function tests, levels of immunoglobulin and pathological characteristic such as interface hepatitis, plasma cell infiltration, portal fibrosis and Rosette formation. Most DIAIH patients could retreat immunosuppression successfully.

With drug induced immune-mediated liver injury is an immune response against protein antigen within the liver that lead to a syndrome of autoimmune hepatitis (AIH) [1,2]. These antigen created by the liver are mainly from reactive metabolic of some drugs. When they are recognized as neo-antigen by immune system, then liver injury develops [3-5]. Although some case reports about drugs induced autoimmune hepatitis (DIAIH) has been published, such as abolished tienilic acid and in-use nitrofurantion. These cases were firstly reported in Unite d States in 1970’s and the clinical data of them is limited [6,7]. Howeverthere is still few available data on clinicalpathological manifestation and treatment of DIAIH. Moreoverwith some new drugs created, more DIAIH will be founded in clinical works [8-10]. So it is still difficult to differentiate DIAIH from AIH from clinical manifestation for the same positive antibody, especially when DIAIH has no obvert medication history and a mild hepatitis course. And in China, DIAIH is different from western countries, more traditional herbal medicines are in using, which is rarely studied systemically.

Also diagnosis of AIH is a difficult challenge, as clinical spectrum of which is different. And AIH can affect people at various ages, both sexes and different range. Positive antibody is a feature of AIH [11,12]. However, only SLA/LPautoantibodies are specific for the diagnosis of AIH, but they are only present in about 20% of cases. The most common feature in all patients with AIH is an elevation of IgG levels, usually a selective or highly preferential elevation of IgG in comparison to IgA and IgM. However, in some patients the relative increase in IgG levels may be within the normal limits, because the normal range is quite wide [13,14]. Autoantibodies vary, and some patients do not display any autoantibodies at the time of clinical presentation. So in these cases, pathological feature will play an important role in diagnosis of AIH, which will help differentiate AIH from DIAIH.

In this study, we mainly focus on different pathological characteristic of AIH and DIAIH. Meanwhile, we compared clinical, biochemical data and prognosis of DIAIH patients with AIH and drug induce non-AIH patients. Furthermore, we also gave an explicit illustration about treatment strategy of different patients and compare with prognosis or outcome, then gave an evaluation to different treatment strategies.

We retrospectively collected all patients with a diagnosis of AIH and drug induced liver injury at Rizhao people’s Hospital from 2010 to 2014 (Figure 1). The study design and procedure were approved by institutional review board of the hospital. All patients were provided written and fully informed consent. Total 309 patients (73 AIH, 236 DILI) were identified. Only patients with available clinical data at baseline and another one follow-up were enrolled. Newly enrolled patients were asked to return to record outcome at 12 months. 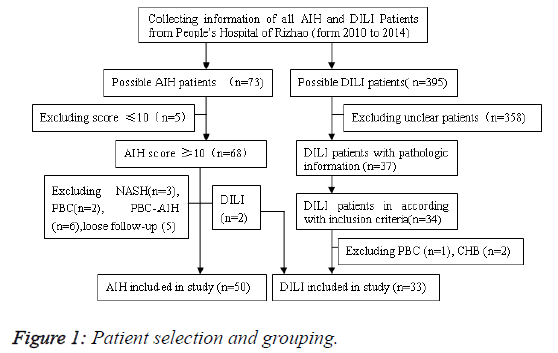 AIH patients in accordance with new simplified criteria proposed by the International Autoimmune Hepatitis Group at baseline were included. The criteria includes the followings which takes as 2 score (i) Globulin, γ-globulin or immunoglobulin G level >1.5 times normal (ii) ANA, SMA, or anti- LKM1 1:80 in adults and 1:20 in children; (iii) No markers of current infection with hepatitis A, B, and C viruses (iv) Histologic features interface hepatitis plasma cells rosettes. Lymphocyte infiltration with no typical interface hepatitis was scored 1; liver disease with other cause such as fatty liver was scored 0. Only patients with score >7 was definite AIH, which was enrolled into this study. Patients with AIH and PBC or PSC overlap syndrome were excluded.

SPSS 17.0 statistical software was used to analyse the data. Enumeration data with chi-squared test (χ2 test) or Fisher’s exact tests, as appropriate. Continuous variable of the biomarker concentrations are presented as median and interquartile range. The mean ± standard error of mean (SEM), median and other needed values were calculated. The non parametric Mann-Whitney U-test was used to determine differences between two groups. Pathology evaluation were assigned as 3, 6, 9, 12 in accordance with 1-4, intermediate will also be scored. Analysis of pathology score was rank sum test. All tests were two-tailed and conducted by SPSS 17.0. P<0.05 was considered statistically significant.

Only 50 AIH cases and 33 DILI cases were identified with available clinical, biochemical and histological data. And all the patients were definitely diagnosed as previously explicated in methods. Among DILI patients, there are (18/395, 4.55%) patients with positive autoimmune antibodies, namely DIAIH.

Table 1. The clinical information of AIH and DILD. 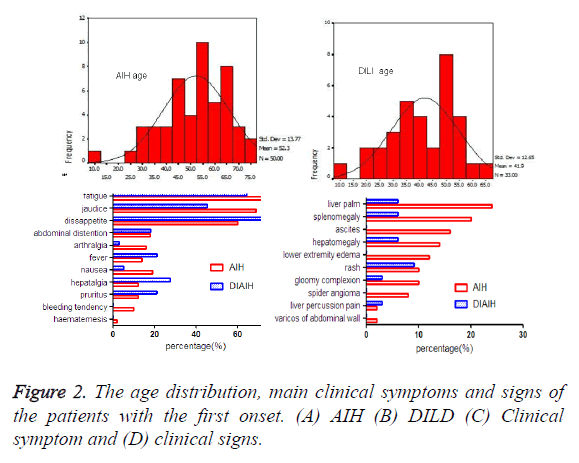 Table 2. Comparison of demographic and biochemical, treatment and response in AIH, DILI and DIAIH patients.

Only part of patients was received liver biopsy at presentation. More AIH patients 54.5% (12/22) had typical histology than DIAIH patients 18.2% (6/33) according to histological characteristic presented by Hennes et al. The typical histological changes of AIH were portal inflammation, interface hepatitis and infiltration of plasma cells. Among them, 86.4% (19/22) patients presented with portal inflammation scores ≥ 3, 59.1% (13/22) patients had piecemeal necrosis scores ≥ 3. Infiltrated cells were prominent with lymphocyte and plasma cells. 54.5% (12/22) patients exhibited intra-lobar inflammation necrosis, such as piecemeal necrosis and confluent necrosis. Infiltration of cells was prominent of lymphocyte, 31.8% (7/22) was plasma cells and 86.4% (19/22) showed various stage of portal fibre formation (Table 3). 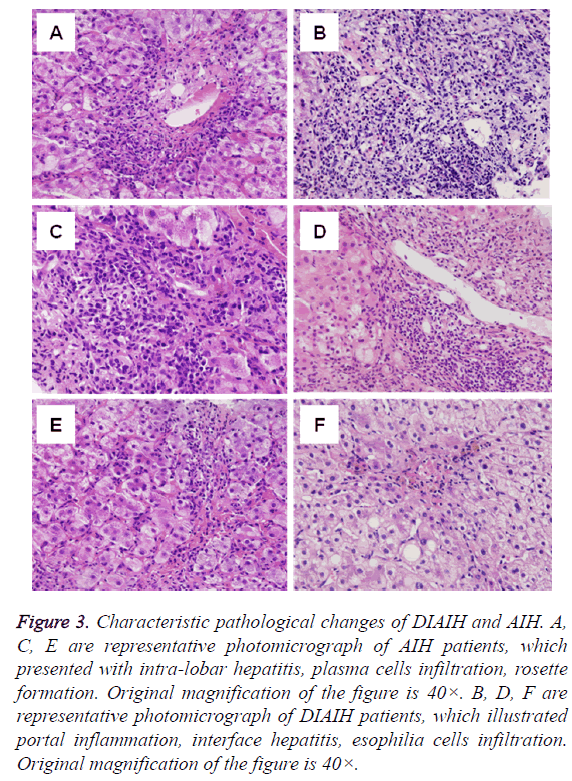 Inflammation and necrosis scores of AIH and DIAIH patients was no difference (Table 4). But inflammatory cells infiltrated were different, plasma cells in most AIH, esophilia cells mainly in DIAIH (Figure 3).

In all AIH patients, 52 out of 73 patients received immunosuppressive treatment. Other 21 patients were not suitable for immuno-suppressive treatment for accompanying complications such as ascites, liver failure, upper digestive tract haemorrhage and patient’s institution. 75% patients achieved complete response which is defined as that all liver function tests were normalized within 1 y and sustained at least 6 months, or liver biopsy found least liver inflammation. 10% patients gained part response, 15% relapsed and retreated treatment for reverse contradictions. All DIAIH patients responded well for all treatment, and all can be discontinued treatment in 3-17 months without severe complications.

Also in this study, we compared clinical and pathological data of DIAIH and AIH. We found that sex and age at diagnosis of AIH patients were similar to that of DIAIH, which were mostly female and at 55-60. This is different from Japanese study, which showed age at diagnosis of AIH was at 20’s and 50’s [14]. Also this may be one cause that most patients at diagnosis in this study were present with cirrhosis [15]. This is influenced by demography and genetic factor. However, liver function test results showed that ALT, AST and bilirubin levels of DILI and DIAIH patients were significantly higher than that of AIH patients, which may be related with different mechanism [14]. In DILI and DIAIH patients, major mechanism was drug induce direct hepatocyte injury apart from autoimmune antibody induced cell injury. Although antibodies of DIAIH patients were serum positive, their titers were not as high as that of AIH. Immunoglobulin of AIH patient was significantly higher than that of DIAIH [16,17].

In our study, part of AIH patients were not received immunosuppressive treatment for disease associated complications such as liver cirrhosis and ascites [18]. About 50% AIH patient responded to immunosuppressive drug and most treatment were steroids and azathioprine combination strategy. However, none of AIH patients could retreat immunosuppression successfully during follow-up. 50% patients would relapsed after withdraw treatment. Converse with AIH patients, most DIAIH could discontinue treatment successfully in limited time and most of treatment strategy was steroids only, which may be also related with stopping using suspected medicine. Levels of antibodies and immunoglobulin were related with disease progressions, so surveillance of them will contribute to patient management.

Although AIH and DIAIH were serum positive, pathological characteristic of them were different, which facilitated differentiation of them. In this study, we can see that different histological points were following: (1) AIH is prominent of portal, interface inflammation and infiltration of plasma cells. With DIAIH, it is mainly consisted by peri-central-venous inflammation and with esophilia cells dominant mixed cells [18,19]. (2) AIH patients had rare liver fatty degeneration and cholestasis in liver biopsy, but DIAIH is commonly present with liver steatosis and bile thrombus formation in hepatocyte and phagocyte [4,16]. (3) Various stages of sinus and portal fibrosis were shown in AIH liver biopsy which reflecting chronicity of AIH, versus no fibrosis in DIAIH rather than acute necrosis [19,20]. (4) Rosette formation was common in AIH not DIAIH, which was phenomenon of liver cell regeneration. Recently, more cases report that intra-lobe necrosis is also a histological characteristic of AIH without portal inflammation, and follow-up of these patients will develop into typical AIH histology.

As DIAIH is drug induced liver autoimmune injury, history of medication is also important point for diagnosis which is different from AIH patients. In China, Chinese traditional medicine is a major cause, with other diclofenac, meloxicam. In west, NSAID drugs and immunosuppression’s are major causes. Also drug induced AIH is an acute occasion, however AIH is mostly a chronic and concealed onset. All these difference will help differentiation of AIH and DIAIH.

All in all, we can see that AIH and DIAIH are similar in autoimmune antibodies positive and in inflammation score. However there is still difference in some aspects such as levels of serum antibody, AST level, immunoglobulin and pathological changes. From histological aspects, we can see that more plasma cells infiltration of portal in AIH can be seen, but more liver steatosis and esophilia cells in DIAIH. All these lead to different treatment strategy and prognosis. AIH patient should be treated with longer combination treatment and less discontinuation chance, DIAIH can be treated with steroids only and can be stopped in limited time.

This finding suggests that DIAIH is different from AIH in liver function tests, levels of immunoglobulin and pathological characteristic such as interface hepatitis, plasma cell infiltration, portal fibrosis and Rosette formation. Most DIAIH patients could retreat immunosuppression successfully.

The study protocol was endorsed by the Medical Ethical Committee of the Rizhao People's Hospital, besides, each participant provided informed consent.

We thank Professor Wang Tailing in Chinese-Japan Friendship Hospital for provision of the pathological staining and evaluation of liver fibrosis.