Objective: Many drugs such as minocycline, nitrofurantoin, halothane, non-steroidal anti-inflammatory drugs, anti TNF (Tumor Necrosis Factor) antagonists can induce the autoimmune hepatitis. Herein, we aimed to assess patients suffering from drug induced autoimmune hepatitis who were hospitalized with acute hepatitis like transaminase elevations to our clinic between 2009-2015.

Results: We determined 9 patients whose score were compatible with the diagnosis of Autoimmune hepatitis (AIH). Three patients were older than 50, and six patients were between 19 and 31. Seven of nine patients were female. The drugs thought responsible for AIH were as follows; ciprofloxacin alone, amoxicillin plus nimesulid, amoxicillin plus ornidazole, amoxicillin alone, a combined oral contraceptive pill plus a mixture of natural drugs, metronidazole plus dexketoprofen, ramipril plus metronidazole, levofloxacin alone and venlafaxine plus mianserin for each case. Five of nine patients had been followed up conservatively upon discontinuation of drug(s) and did not need any treatment during hospitalization and resolved spontaneously. Four patients received immunosuppressive treatment which was withdrawn in 3 of those 4 patients after 3 to 6 months upon remission without relapse.

Conclusion: Drug induced autoimmune hepatitis (DIAIH) can be presented with acute hepatitis of unknown etiology. Female sex seems to be a risk factor for DIAH. Treatment decisions should be given according to patient’s clinical status and follow up at acute presentations. There can be no treatment need, but, when needed generally a short course of immunosuppressive treatment can be sufficient.

Autoimmune hepatitis (AIH) is an inflammatory liver disease that predominantly affects women and is characterized by hypergammaglobulinaemia, circulating autoantibodies, interface hepatitis on liver histology, and a favourable response to immunosuppression [1]. AIH may present with a variety of clinical manifestations, ranging from asymptomatic disease to fulminant liver failure. Early diagnosis is important in all instances because the disease can be highly responsive to immunosuppressive therapeutic options. Left untreated, the disease is associated with high morbidity and mortality [2]. The pathogenesis of AIH postulate an environmental agent that triggers a cascade of T-cell-mediated events directed at liver antigens in a host genetically predisposed to this disease, leading to a progressive necroinflammatory and fibrotic process and ultimately cirrhosis in the liver. Environmental agents assumed to induce AIH have not been delineated, but viruses, certain drugs and herbal agents may lead to AIH [3]. Drug induced autoimmune hepatitis (DIAIH) has been reported to be caused by several drugs. Minocyline, nitrofurantain, halothane, tienciclic acid, dihydralazine, methyldopa, ornidazole, alpha and beta interferon, statins, fibrates and anti- TNFα agents are the examples of reported drugs that may induce AIH [3-5]. AIH is a clinicopathological diagnosis and for an objective diagnosis scoring systems are used. In 1993, the International Autoimmune Hepatitis Group published first scoring system for AIH [6] with a revision released in 1999 [7]. A simplified scoring system was published in 2008 [8], which was subsequently vetted and shown to have high specify [2].

We aimed to assess DIAIH cases that presented with acute hepatitis of unknown etiology or elevated transaminese levels to our hospital between 2009-2015, and also wanted to evaluate treatment need and the prognosis of these cases.

We searched the databases of Department of Gastroenterology, Inonu University Faculty of Medicine from January 2009 to August 2015 for the hospitalized patients who had a possible diagnosis of DIAIH. Patients who presented with acute hepatitis like transaminases elevations and had been searched for etiology of liver disease and had a diagnosis of DIAIH confirmed with liver biopsy were included in the study. Acute hepatitis like transaminase elevation was defined as alanine transferase (ALT) and/or aspartat transferase (AST) greater than 5 times the upper limit of normal in patients without chronic liver disease history. Only the patients whose prior drug history use were at least 7 days in previous 3 months and those patients whose gamma-globulin or IgG levels were elevated and autoantibodies for AIH [antinuclear antibody (ANA), smooth muscle antibody (SMA), Liver Kidney Microsomal(LKM), soluble liver antigen/liver pancreas (SLA/ LP)] were positive were selected. Those patients that had positive viral serologies for hepatitis A, B, C, D, E, Cytomegalovirus (CMV), Epstein-Barr virus (EBV), Herpes simplex virus (HSV) or anti-mitochondrial antibody (AMA), anti-neutrophil cytoplasmic antibody (ANCA) positivity were excluded. Also the patients whose metabolic liver disease parameters (alpha 1 antitrypsin, ferritin, transferrin saturation, ceruloplasmin and serum/urinary copper levels) were abnormal and the patients with vascular liver diseases such as Budd- Chiari syndrome, biliary obstruction or alcohol consumption history were excluded.

The patients were retrospectively scored according to simplified diagnostic criteria of International Autoimmune hepatitis Group (SDCIAG). SCIAG includes autoantiboies, IgG or gamma-globulin level, liver histology, absence of viral hepatitis (Table 1). The patients whose score were ≥ 6 were included in the study. According to SDCIAG, a score of 6 means probable AIH and a score of ≥ 7 means definite AIH.

Liver biopsy specimens of selected patients were re-evaluated systematically according to the hepatitis scoring system by Ishak et al. [9]. The patients whose previous liver biopsy findings were compatible or typical for AIH were included in the study. In order to accept typical for AIH, each of the following features had to be present in liver histology, namely; interface hepatitis, lymphocytic/lympoplasmacytic in portal tracts and extending into the lobule, emperipolesis (active penetration by one cell into and through a larger cell), and hepatic rosette formation. Chronic hepatitis with lymphocytic infiltration without all the features considered typical was accepted as compatible liver histology for AIH. Patient records reviewed for any treatment need during hospitalization and status of treatment during outpatient follow ups.

We determined 9 patients whose score were compatible with the diagnosis of DIAIH according to SDCIAG. Three patients were older than 50, and six patients were between 19 and 31. Seven of nine patients were female (77.8%). The patients had been generally presented with symptoms of malaise, abdominal pain, nausea, vomiting and icterus. The patients were found to have acute hepatitis of unknown etiology upon admission to our clinic or as the referred patients due to elevated transaminases. Transaminases levels of patients were greater than 5 times upper limit of normal, and mostly greater than 10 times. ALP and GGT levels were not elevated prominently. Prothrombin times of the patients were found to increase between 14, 1 and 67 seconds. There were marked increases in bilirubin levels of most patients. The drugs thought responsible for AIH were as follows; ciprofloxacin alone, amoxicillin plus nimesulid, amoxicillin plus ornidazole, amoxicillin alone, a combined oral contraceptive pill plus a mixture of natural drugs, metronidazole plus dexketoprofen, ramipril plus metronidazole, levofloxacin alone and venlafaxine plus mianserin for each case. Six patients were found positive for ANA, and three patients found positive for ASMA. Histopathological findings of 3 patients were typical and 6 patients were compatible for AIH (Figures 1 and 2). Five of nine patients (55.5%) had been followed up conservatively upon discontinuation of drug(s) and did not need any treatment during hospitalization and resolved spontaneously. Four patients received immunosuppressive treatment that was started during hospitalization and the treatment was withdrawn in 3 of those 4 patients after 3 to 6 months upon remission without relapse. One patient is still using corticosteroid plus azathiopirin. The demographic and clinicopathologic characteristics of patients are presented in the Tables 2 and 3. 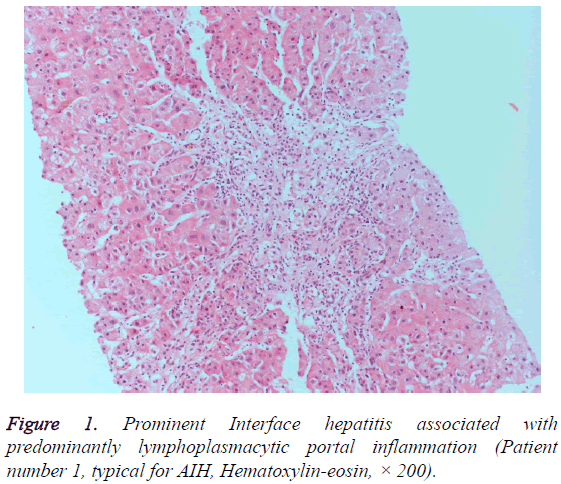 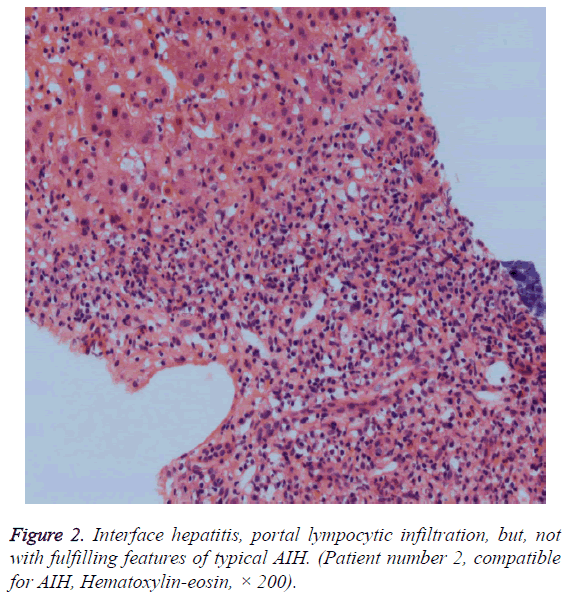 Table 2: Demographic properties and initial laboratory tests of the patients.

The etiology of AIH is uncertain, but the disease can be triggered in susceptible patients by external factors such as viruses, drugs or herbal remedies. Drug induced liver injury with autoimmune features, also called DIAIH is marked by acute or chronic liver injury accompanied by the development of auto antibodies, a hepatocellular pattern of serum enzyme elevations, and liver biopsy features suggestive of idiopathic AIH [10-12].

Recently, it has been reported that at least 24 drugs, probably more, have been associated with autoimmune chronic hepatitis mimicking AIH, but more and more new agents are being implicated [10]. In our study, 1 ciprofloxacin, 1 levofloxacin, 3 amoxicillin , 2 metronidazole, 1 ornidazole, 2 NSAID (1 nimesulid, 1 dexketoprofen), 1 venlafaxine , 1 mianserin drug and drug combinations and a combined oral contraceptive plus natural drug combination were found responsible for DIAIH. In drug combinations (6 case), it is not certain whether one or both of the drugs were responsible for DIAIH. Licanta et al. [13] reported 12 patients of DIAIH [cases due to NSAID (4 nimesulid, 1 ketoprofen), 3 amoxicillin-clavunate, 1 ceftriaxon, 1 epigallocatechin gallate and 1 hpyericum perforatum-herbal drugs, and dimethoate -toxic agent]. Ersoz et al. [3] reported 13 cases of DIAIH due to ornidazole, 5 of whom recovered spontaneously. There are few case reports of DIAIH due to ciprofloxacin, levofloxacin and metronidazole [14-16] but no reported cases due to venlafaxin and miancerin.

The most important element in management of DIAIH is to recognize the possible role of the medication and discontinue it promptly. All of our patients had just discontinued drug(s) at the presentation or at the time of diagnosis.

DIAIH resembles idiopathic AIH, but generally resolves completely once the medication is withdrawn, although recovery may be slow and lead to a limited course of corticosteroid therapy. Active therapy for AIH using corticosteroids is often used in cases where a medication is thought to be the cause, although without controlling medical evidence for efficacy. Nevertheless, corticosteroid therapy is appropriate if recovery does not start within 1 to 2 weeks of stopping the implicated agent nor if there is any evidence of hepatic failure, such as prolongation of prothrombin time, deepening jaundice, hepatic encephalopathy, and serum hypoalbuminemia with edema or ascites. An appropriate regimen would be prednisone (or its equivalent) in doses of 20 to 60 mg daily, decreasing the dose rapidly upon evidence of improvement with the goal to discontinue therapy completely within 3 to 6 months [19]. In our patients, 5 of 9 patients resolved spontaneously during follow ups, 4 of 9 patients needed immunosuppressive treatment at initial presentation during hospitalization, 3 of them have received only a short course (between 3-6 months) immunosuppressive treatment without any relapse during outpatient follow ups and one of them is still on immunosuppressive treatment.

Drug induced autoimmune liver disease is a poorly defined and under-reported the liver disorder, and, probably, an underestimated liver disease [10]. Although DIAIH may develop after a prolonged use of a drug, it seems that DIAIH can be presented with acute hepatitis of unknown etiology. Female sex seems to be a risk factor for DIAH. Treatment decisions should be given according to patient’s clinical status and follow ups at acute presentations of DIAIH. There can be no treatment need, but, when needed generally a short course of immunosuppressive treatment can be sufficient without relapse opposed to idiopathic AIH.