In patients with either systolic or diastolic heart failure (HF), the symptoms of the disease limits the functional capacity. Yoga combines structured physical and breathing techniques and meditation to stimulate sense of well being. Despite yoga’s widespread appeal, there are limited data on whether the addition of yoga improves functional capacity or quality of life in patients with HF. The present study was conducted in 98 HF patients, who were randomly divided into two groups; yoga group (YG) (n=44) receiving standard medical therapy plus yoga therapy for 12 weeks and control group (CG) (n=48) receiving only standard medical therapy. Minnesota living with heart failure questionnaire (MLWHFQ) and 6 minutes walk test (6MWT) was used to assess the quality of life and functional capacity. At the end of 12 weeks period, MLWHFQ-total was reduced by 45.0% in YG and 9.1% in CG; MLWHFQ-physical dimension was reduced by 46.4% in YG and 3.9% in CG; MLWHFQemotional dimension was reduced by 65.7% in YG and 6.6% in CG; and 6MWT distance improved by 66.2% in YG and 12.4% in CG. The results of this study demonstrates that 12 week yoga therapy enhances the improvement in functional capacity and quality of life in stable heart failure (NYHA I & II) patients receiving standard medical therapy.

Over the past decade, HF has become more prevalent [1] and one of the most common chronic illnesses of modern times, with a major clinical and economic impact on society [2,3]. The symptoms of HF significantly reduces the quality of life (QoL) among those who live with this disease [4]. In patients with either systolic or diastolic HF, the symptoms of the disease limits the functional capacity [5]. Previous studies have supported interventions aimed at treating the symptoms of HF, improving QoL, and overall health related outcomes [6].

Yoga is comprised of a rich treasure of physical and psychological techniques that can be effectively used to promote physical and mental well-being. Yoga as an ancient traditional method of lifestyle modification finds roots in the early civilizations of the central Asian regions of different countries. In India, it flourished and evolved as a vibrant way of life and spiritual practice [7]. Yoga combines structured physical and breathing techniques and meditation to arouse sense of well being. Although exact mechanisms of therapeutic potential of yoga remains hypothetical, a variety of beneficial effects for patients with cardiovascular diseases are reported. For example, studies have demonstrated an improvement in psychological well-being and even regression of atherosclerosis when combined with dietary and other lifestyle modifications [8,9]. In spite of yoga’s widespread appeal, there are limited data on whether the addition of yoga improves functional capacity or QoL in patients with HF [10]. The clinical application of the previous studies were limited by lack of control groups and by the varied style, intensity, and duration of the yoga therapy. The purpose of the present study was to evaluate the effect of 12 week yoga therapy in addition to standard medical therapy on QoL and functional capacity in patients with HF (NYHA I & II).

Patients were recruited from the cardiology outpatient department of the Jawaharlal Institute of Postgraduate Medical Education and Research (JIPMER), Puducherry, India. Initially, nine hundred and forty two HF patients were interviewed regarding their participation in this study, out of which seven hundred and forty eight patients did not meet the inclusion criteria and sixty-four patients declined to participate. Patients with systolic and/or diastolic dysfunction, having ejection fraction of 30-50%, patients who satisfied the New York Heart Association (NYHA) Class I-II, those who were able to walk without assistance and had been on stable medical therapy were included for the study. Patients who had chronic obstructive pulmonary disease, who were unable to attend yoga sessions, those with orthopedic impediments to yoga, those who had undergone hospitalization within the last three months, and those suffering from myocardial infarction or recurrent angina within the last six months were excluded from the study. The study was approved by the institute ethics committee. One hundred and thirty patients were recruited and randomized into two groups; control group (CG) (n=65) receiving standard medical therapy and yoga group (YG) (n=65) receiving standard medical therapy plus yoga therapy. Forty-four patients in YG and forty eight patients in CG completed the study.

Yoga sessions were conducted at ACYTER, JIPMER, in the vicinity of the department of cardiology. Yoga therapy was designed in consultation with a cardiologist who is experienced in this form of therapy and research in conjunction with a yoga therapist having expertise in cardiac rehabilitation. Each session lasted around 60 minutes. After two weeks of participation in monitored sessions, YG patients practiced the same for three days under our direct supervision and three days at their home for a total duration of 12 weeks.

Modifications were made on an individual basis, according to each participant’s specific medical or orthopedic limitations. Chairs were used for those who were unable to stand up directly from the floor and the wall was used as a support during the standing-balance postures. Pranayama breathing exercises (breath awareness training) consisted of deep inhalation and exhalation in a 1:1 ratio, without breath retention. Inhalation was taught to commence with sequential involvement of the abdomen, lower chest, and then, the upper chest, and the same sequence was performed in reverse, during exhalation. Meditation and relaxation practice were performed in a supine or seated position according to the participant’s comfort level and preference.

Age, gender, height and weight were recorded for all the subjects. The medical chart was reviewed for clinical characteristics, such as hypertension, diabetes, coronary artery disease, pulmonary disease, NYHA classification and ejection fraction.

Functional capacity was measured by using 6 minutes walk test (6MWT). The 6MWT was conducted according to a standard protocol [11], using an internal hallway with the 100-feet distance marked by colored tape on the floor. The participants were informed that the purpose of the test was to see how far one can walk in six minutes. They were then instructed to walk from one end to the other end of the hallway at their own pace, in order to cover as much distance as possible. Each minute, the participants were encouraged with the standard statements “You are doing well” or “Keep up the good work”, but not with any other phrases. Participants were allowed to stop and rest during the six- minutes test period, but were instructed to resume walking as soon as they were able to do so.

A mechanical lap counter was used to count the number of laps completed, and an electronic timer with a buzzer that sounded when six- minutes test period was over. Before the walk started and at the end of the 6-min walk, participants were shown a modified Borg dyspnea scale [12] printed on a card and were asked to indicate their present degree of shortness of breath. The dyspnea scale had markings from zero (nothing at all) to ten (very, very severe). At the end of the walk, they were asked if they had experienced any of the following specific symptoms: dyspnea, chest pain, light-headedness, leg pain, or any other symptoms.

Measurement of quality of life

Quality of life was measured with the MLWHFQ. This disease-specific questionnaire is the most widely used and validated assessment of QoL in patients with HF. The MLWHFQ-total is composed of 21 questions addressing the i) physical dimension (MLWHFD-PD) (Q.no: 2,3,4,5,6,7,12,13), ii) emotional dimension (MLWHFDED) (Q.no: 17,18,19,20,21) and iii) the symptoms of HF. Recent studies have shown this questionnaire to be responsive to changes in quality of life in patients with chronic HF [13]. The participants completed the questionnaire at enrollment and again at the end of the study.

Physiological characteristics of the study participants are presented in Table 1. Before commencement of yoga therapy, there was no significant difference in any of the parameters when compared between yoga group and control group. However, all the parameters (MLWHFQ-T, MLWHFQ-PD, MLWHFQ-ED and 6MWT) were significantly different (p< 0.01) when compared before and after 12 weeks period in the yoga group as well as in the control group as depicted in Table 2.

Table 2: Within group difference of Quality of life and functional capacity. 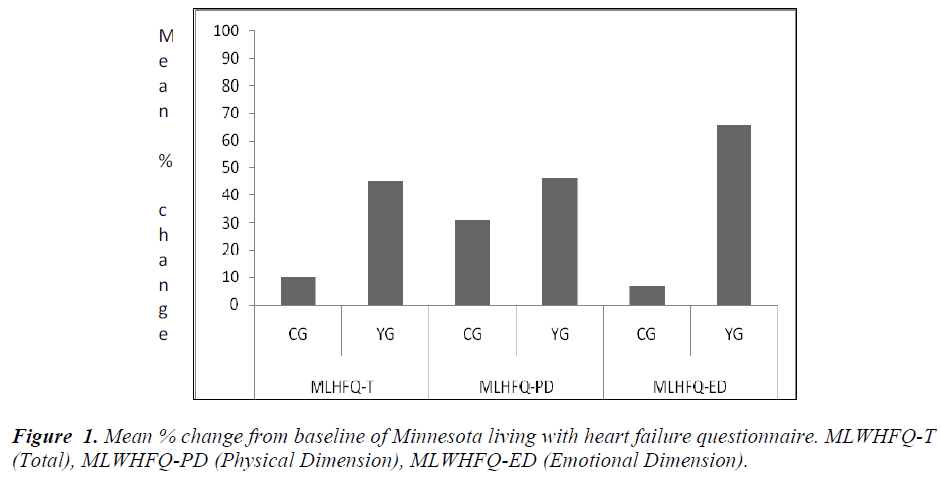 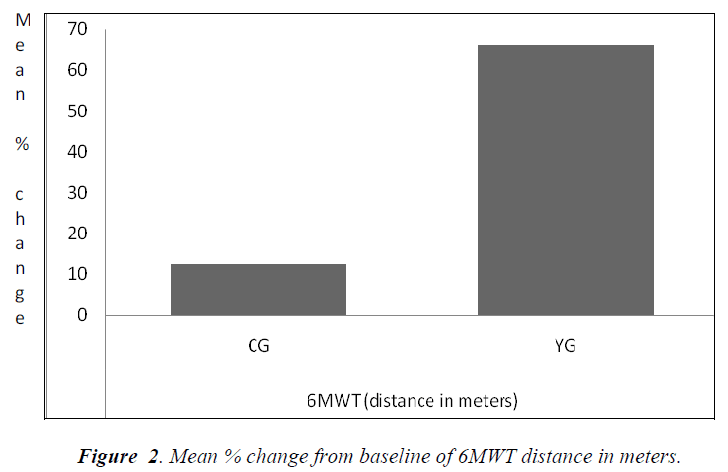 Figure 2: Mean % change from baseline of 6MWT distance in meters.

Regardless of significant advances in pharmacological and clinical management of HF, patients continue to experience considerable symptoms, deterioration of functional capacity, poor QoL [4], frequent HF exacerbations and hospitalizations [14,15]. The present study is unique in that there were no registered clinical trials with standard yoga therapy and adequate sample size examining the effect of yoga on functional capacity and QoL.

The results of this study demonstrate that the addition of a supervised 12 week yoga therapy in addition to standard medical treatment of HF leads to an imoprovement in functional capacity and QoL in HF patients. Mechanisms by which yoga might have improved the QoL and functional capacity are speculative at this time. In addition to haemodynamic dysfunction, an increased neurohumoral activation via the sympathetic nervous system and the renin-angiotensin system has been implicated in the progression of HF [16]. Indeed, drugs such as betablockers and ACE-I/ARB that block this neurohumoral activation, lead to reduction in morbidity and mortality in patients with HF [17,18].

Combination of yoga postures with breathing exercises and meditation attenuates sympathetic activation and could lead to a decrease in ventricular filling pressures [19]. In addition to allowing for a predominance of the parasympathetic state, yoga may also promote effective extraction of oxygen by peripheral tissues. When muscle is stretched, the oxygen consumtion increases. Study that examined the health-related aspects of yoga found that 8 week yoga training increased muscular strength by 31%, muscular endurance by 57%, flexibility by 88%, oxygen uptake by 7% and reduced cardiovascular risk in healthy adults [9]. This data seem to support the findings of the current study that showed 66.2% increase in functional capacity in yoga group compared to only 12.4% increase in control group.

In addition to the proposed mechanism of yoga’s ability to attenuate the derangements of the autonomic nervous system, and thereby improving symptoms, yoga postures, relaxation and breathing practices may retard the pathogenic mechanisms involved in HF, and its promotional effect on psychological well-being may aid as well. In this study, answers to the well validated MLWHFQ indicated that the patients who participated in yoga perceived it to be beneficial and statistical significance was observed for total scores (MLWHFQ-T), physical scores (MLWHFQ-PD) and emotional scores (MLWHFQ-ED).

In conclusion, the results of this study demonstrate that a 12 week yoga therapy in addition to standard medical therapy improves functional capacity and quality of life in patients with stable heart failure (NYHA I & II). The improvement in functional capacity and quality of life may translate into a lower mortality rate. The clinical implication is that moderate physical activity in the form of yoga asana, pranama and relaxation may be recommended in conjuction with standard pharmacological therapy in patients with HF (NYHA I & II).

We greatly acknowledge the Department of Science and Technology (DST), Govt. of India, for giving JRF under AORC component of INSPIRE fellowship. We extend our sincere thanks to Director, JIPMER, for providing partial funding through intramural research grant and Programme Director, ACYTER, JIPMER for providing laboratory facilities and yoga therapy.